Let's tell the truth about the Republican Party: It's the real enemy of the people

Coverage of the second impeachment was still driven by media myths about "normal" Republicans. They don't exist 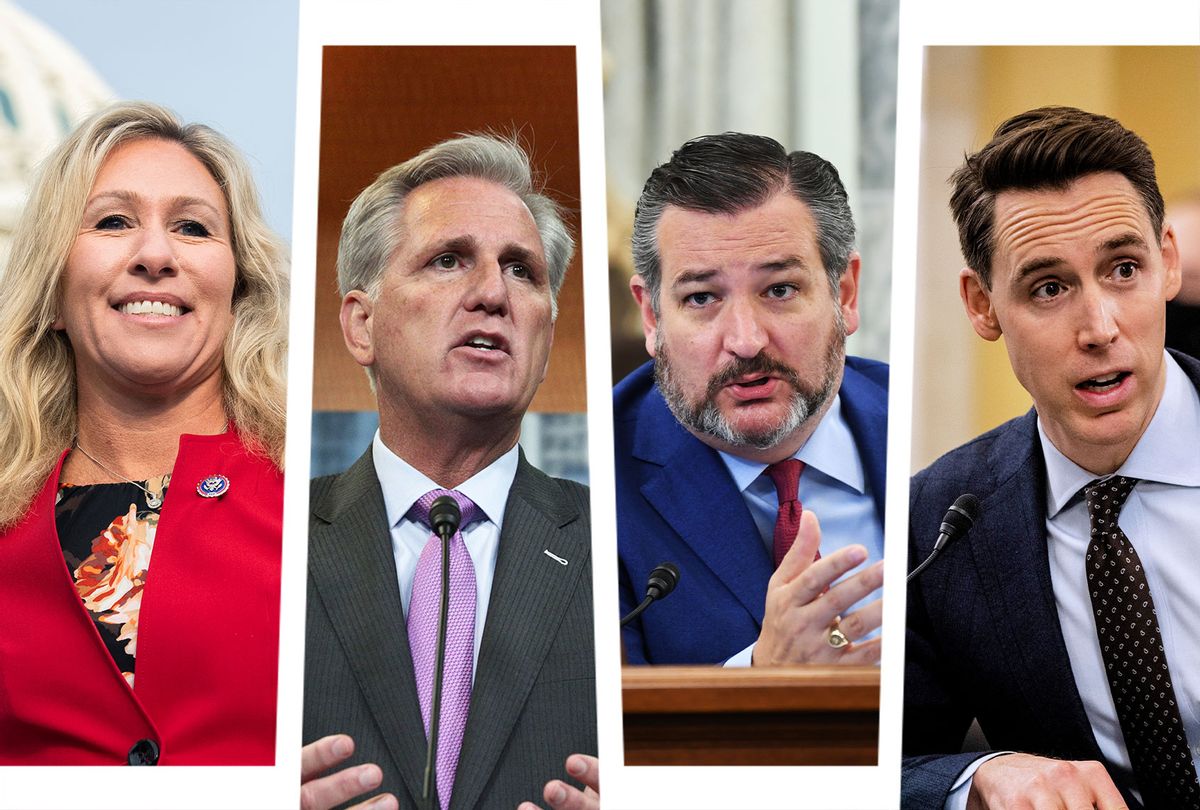 Donald Trump has an amazing instinctive gift for survival. Despite his many failures in business, politics, government and his personal life, Trump has rarely if even been held accountable. In that sense he remains a "winner," as well as the figurehead of a political movement that will not disappear from American life anytime soon.

Last Saturday, Donald Trump was officially acquitted at the conclusion of his second impeachment trial, this time for committing insurrection and encouraging his followers to participate in a lethal attack on the U.S. Capitol on Jan. 6. Why? Simply put, congressional Republicans largely agree with Trump, and are beholden to him. They also fear his followers. With this most recent vote to acquit Trump for his obvious crimes, the Republican Party has become a de facto terrorist organization that embraces the use of political violence by members of the white right against Democrats, liberals, progressives and any other group or individual deemed to be the enemy.

Trump's first impeachment, of course, was for his attempt to extort the government of Ukraine to aid him in the 2020 presidential election by launching a fake investigation of Joe Biden. As a preview of that behavior, Trump and his inner circle colluded with Russian agents to undermine the 2016 presidential election. As revealed by the Mueller report and the U.S. Senate investigations, Trump and his agents went on to commit other crimes, including obstruction of justice, in order to conceal their obvious guilt in the Russia scandal.

Donald Trump won that time too: He established the precedent that Republicans can break the law — up to and including illicit aid from hostile foreign countries — to meddle with elections without fear of punishment or other consequences.

In these and other ways, the Republican Party and the broader right-wing movement have shown the American people and the world that they are anti-democratic, anti-majoritarian, fascist and authoritarian. They are enemies of multiracial democracy and pluralism, and committed to winning power and holding it by any means necessary and at any cost. Yet too many among the American news media, the Democratic Party and the public at large remain in denial.

Trump's second impeachment trial was a grand stage for comforting yet empty narratives.

One such narrative holds that now Trump has been shamed for posterity, and the Republicans who voted to acquit him have been shamed too. But Trump has shown himself to be a sociopath, perhaps even a psychopath. He is incapable of shame. Trump leads a political cult. Polling data shows that he is far more popular than the Republican Party as a whole. Republicans in Congress are loyal to him, either out of fear or because they share his vision. Nearly all of them voted for nearly all of Trump's policies. By implication, they are part of a sociopathic political party and movement.

Trump's followers are definitely not ashamed of him. They believe that he and by extension the are noble "patriots" who are being victimized by "political correctness" and the intolerant or "socialist" left in general.

Another narrative holds that "history is watching" and that impeaching Trump a second time set an important precedent. But Republicans and Trump supporters do not care about the "truth" or the abstract judgment of history. Their commandments are victory and power by any means. Today's American right wing understands that history is a malleable thing, which in many ways is written by the victors.

As with other fascists and authoritarians, today's Republican Party lives in a type of eternal present. They may speak of "tradition" and a return to some idyllic, fictive past of "greatness" and "glory," but those are just linguistic devices deployed to achieve victory by destroying existing societal institutions and norms. As for precedent? That assumes a future America where there is a substantive commitment to real democracy and the rule of law. Given the enduring power of Trumpism and other right-wing fake populist movements, such an assumption is very much in doubt.

A third important narrative holds that the Republican Party is in disarray, or at war with itself. This is objectively untrue. Most of the Republican Party's leaders and voters continue to support Donald Trump. Those Republicans who dared to vote in support of impeaching and convicting Donald Trump are being censured and otherwise punished by the party. Any and all Republican elected officials who oppose Trump face the real possibility of losing their seats at the next election.

Trump's second impeachment and Joe Biden's election have led to unwarranted schadenfreude among the hope-peddlers and professional centrists in the news media, who are desperate to throw the Age of Trump down the memory hole. So we are told that "tens of thousands" of registered Republicans are supposedly fleeing the party because of Donald Trump.

Such joy is misplaced and unearned. A temporary move by a few thousand potential voters away from the Republican Party does not mean they will then become Democrats. Those same voters will likely come back to the Republican Party, sooner rather than later. Even assuming the most generous reading — that Trump will damage the Republican Party in the 2022 midterms, the 2024 presidential election and beyond — Republican elected officials are largely immune to the pressures of public opinion because they have used gerrymandering, voter suppression and other means to solidify their power and remain in office.

These misreadings of Trump's second impeachment trial and its implications signal to a much larger problem in American politics and society: Many opinion leaders, as well as average Americans, are in the grip of a willful crisis of imagination. They are naive about the true nature of the Republican Party, Trumpism and the right more generally.

The Republican Party and right-wing movement do not believe in real democracy. Their policies are anti-democratic and antisocial. Democratic norms, values and traditions are but a way of getting and keeping power. Once power is won by Republicans and other members of the right, democracy is dismantled — whether piece by piece, or all at once — in service to authoritarianism, fascism, white supremacy, Christian fascism and gangster capitalism. In such a failing democracy, "bipartisanship," "consensus" and "unity" are polite ways of announcing one's surrender.

Ultimately, folk theories of democracy, with their assumptions about consensus politics based on a shared political culture and commitment to political institutions, are incapable of responding to a fascist and authoritarian movement that rejects such values.

The American mainstream media, the nation's cultural and political elites and the American people en masse also have a very bad case of the "should haves," a form of cognitive bias if not an addiction to a fantastical normative view of politics and reality that cannot effectively grapple with realpolitik and American neofascism.

When prominent public voices pronounced that Republicans should impeach Trump, they were projecting their own beliefs about democracy and decency on a political party which does not believe in such things.

Media and political commentator Eric Boehlert recently warned of precisely this error in inference and assumption in his newsletter Press Run, writing that Republicans who had voted to acquit Trump "will sleep just fine at night." After all, they had "advanced the Big Lie all winter," pretending that Trump had possibly somehow won an election he lost by 7 million votes. They had said nothing "while the White House unleashed the most vicious and sustained attack on U.S. election integrity in the last century," and while Trump "pressured Georgia elections officials in January to go 'find' him enough votes (11,780) to swing that state's election tally."

Why on earth do D.C. journalists think that voting "No" on impeachment would change the equation and create an ethical dilemma for Republicans? Why are reporters so committed to the myth that a GOP tipping point exists?

The wayward assumption continues to be, that of course Republicans support free and fair elections. Of course they oppose white supremacy. And of course they want to help families that have been devastated by the Covid-19 pandemic. Those claims have no basis in fact today. Yet that remains the Beltway media's starting point. Specifically, that the GOP has been torn apart by Trump and there's a burning desire to "move on" from his erratic and hateful ways. That a "reckoning" awaits.

That's the story the Beltway press likes to tell. It's just not true.

For weeks after the presidential election, as Boehlert observes, the media wrote about "Trump's 'tactics,' his vague 'moves' and 'chicanery'; his legal 'strategy' and 'power play' while 'sulking' and 'brooding' inside the White House." An article in Politico that Boehlert cites "dismissed Trump's ongoing rampage as nothing more than 'performance art' and 'bad sportsmanship.'" He concludes that as the Republican Party "has morphed into something sinister and dangerous," the model used by the media to cover the GOP "is now clearly obsolete."

Once again, the Republican Party has proven itself to be a uniquely dangerous political organization. But our mainstream American news media primarily speaks for the powerful and not the powerless, too often prizes access over truth-telling, compulsively practices "both-sides-ism" and is existentially committed to a return to "normal" and myths of American exceptionalism. For them to tell the truth about today's Republican Party is a bridge too far. For the sake of the country and the world, let us hope that at least some major figures in the media find some courage.

Such courage begins with acknowledging what the Republican Party truly represents: As Donald Trump was so fond of saying, it is "the enemy of the people."