Media still gobsmacked that "decent" Republicans can't save their party from fascism. Thing is, they don't want to 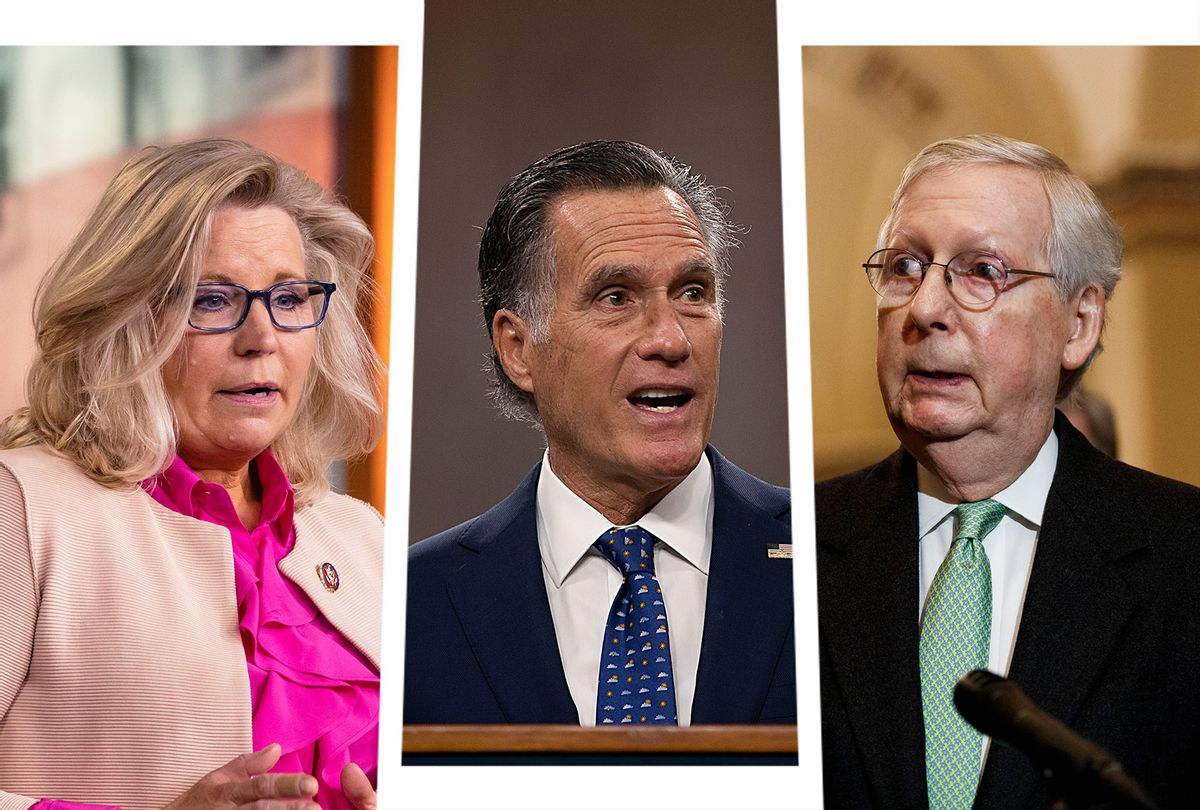 For at least the last five years, the American mainstream news media has been playing its own version of "Where's Waldo?" But instead of looking for a man wearing a hat and glasses among a sea of other images, the media has desperately tried to find "good," "decent," "reasonable" and "responsible" Republicans who will "save" their party from Donald Trump.

Such a quest will prove fruitless, as there are very few such Republicans left.

After Trump's coup attempt and his followers' lethal assault on the Capitol last month, the dominant narrative among the country's leading news outlets was that the Republican Party would experience a "reckoning." The attack would be a type of shock therapy and wakeup call for the party and its leaders. Trump's crimes were so great that Mitch McConnell — no longer the majority leader — and the other Republicans in the U.S. Senate would now vote to convict Trump in order to purge themselves of his power and rebuild the party after its 2020 defeat.

None of that has happened.

Within hours of the U.S. Capitol attack on Jan. 6, 147 Republicans in the Senate and House voted to overturn the results of the 2020 election – the exact goal of Trump's murderous mob.

As they did during Trump's first impeachment, Republicans have now made it clear that they will not convict Trump for his crimes of treason and insurrection. In refusing to hold the disgraced president responsible, the Republican Party has declared itself a criminal organization, one that gives aid and comfort to right-wing terrorists, traitors and insurrectionists.

Instead of being exiled, Trump and his movement remain in firm control of the Republican Party.

At New York magazine, Jonathan Chait recently summarized the failed Republican redemption narrative, writing that after the election defeats and the January insurrection, the party "appeared to be undergoing a crisis of confidence, if not an outright crack-up":

Perhaps, finally, things had gone so far that the party would undertake the soul-searching it had avoided for four years. Senate Majority Leader Mitch McConnell let it be known he wished to be rid of Trump. The party "likely will face a raging internal war over policies and political leaders," asserts longtime Washington hand Jim VandeHei. "Do not underestimate how divided and confused their party is right now," posits David Brooks, "Do not underestimate how much Republicans trust Biden personally."

But instead of a Glasnost for the Republican party, the days after January 6 seem instead to be a Prague Spring — a brief flowering of dissent and questioning of dogma quickly suppressed by a remorseless crackdown. ...

You can already see the internal Republican tension abating as they pull together in opposition. Did Trump make mistakes? Perhaps so, they will concede, but they are behind us, and now they face new dangers and outrages from Biden. No rethinking of the Republican platform — indeed, no thinking of any kind — will be needed. Republicans can simply repurpose Trump's attacks on Biden as a corrupt, doddering crypto-socialist tool of AOC. The Republican civil war is over before it even began.

The mainstream media has anointed Republicans such as Sen. Mitt Romney, Sen. Susan Collins and third-ranking House leader Liz Cheney as the honorable and decent standard-bearers of their party. But again, facts are inconvenient: Whatever grumblings about Trump some Republicans in Congress may have aired (including those just mentioned) they consistently voted in favor of almost all of his policies.

A recent editorial in the Washington Post offers an ideal-typical example of the "desperately in search of normal Republicans" subgenre that has dominated the weeks since Jan. 6, this time focused on the furor surrounding noxious previous statements made by freshman Rep. Marjorie Taylor Greene of Georgia:

What needed to be said — what too many Republicans have been too afraid to admit — was thankfully stated the next day by Senate Minority Leader Mitch McConnell (Ky.). "Loony lies and conspiracy theories are cancer for the Republican Party and our country," Mr. McConnell said in a statement that never mentioned Ms. Greene by name but left no doubt about the subject. "Somebody who's suggested that perhaps no airplane hit the Pentagon on 9/11, that horrifying school shootings were pre-staged, and that the Clintons crashed JFK Jr.'s airplane is not living in reality," he said. "This has nothing to do with the challenges facing American families or the robust debates on substance that can strengthen our party." ...

At least there is a battle over the soul of the Republican Party. Will it ...  eschew the "darkness and division" of the past four years and return to its traditional conservative values? Or will Mr. Trump, enabled by the complicity and cowardice of Republicans who fear being primaried by the likes of Ms. Greene, maintain his cultlike grip?

The Post's editorial board describes McConnell's statement as "significant and encouraging," and concludes:

We hope it signals a moral repugnance with the consequences of Mr. Trump's leadership. But Mr. McConnell is nothing if not shrewd, and presumably his statement also reflects a calculation that Ms. Greene and her type of politics are bad for the Republican Party. That provides some hope — however slim — that this once-proud party might return to its senses.

Such hope will not age well. McConnell is a skilled obstructionist who serves and seeks power for power's sake. Reports that he personally dislikes Trump are credible, but he has consistently advanced the former president's agenda over the past four years, only deviating from it on occasion out of a concern about blowback and overreach. Criticizing a junior House member such as Greene is very easy. But McConnell has done nothing to punish or otherwise rein in the most extreme right-wing voices in his own chamber, such as Ted Cruz or Josh Hawley.

Why is the mainstream news media so obsessed with finding "good" Republicans? In large part, this reflects an enormous investment in "normalcy." To admit that the Republicans — one of the country's two institutional political parties — have become an extremist, anti-democratic organization would be to upend longstanding basic assumptions about politics and how best to cover it. To admit such a dangerous truth would demand a radical reconfiguration of the rules and norms that govern both the culture and business of the American news media.

Dominant frames like both-sides-ism, "balance" and horserace journalism lose even more legitimacy when there is obviously no substantive equivalence between the Democrats and Republicans. The former party, whatever its abundant flaws, is committed to multiracial democracy and the rule of law, while the latter is committed to destroying them.

In addition, the American news media consistently presents "truth" as something which exists somewhere between the policies advocated for by Democrats and Republicans. That fiction would also become even less credible if the Republican Party were correctly presented as being fundamentally opposed to democracy, committed to lies, disinformation and conspiracy theories, and consistently working against the public interest.

Indeed, the continued existence of "honorable" and "traditional" Republicans is a cornerstone principle of the American mainstream media's approach to politics. With a few notable exceptions, the mainstream media has had no serious reckoning with its own failures in the Age of Trump, or with how it enabled his rise to power, normalized his behavior as both candidate and president, and then downplayed the obvious likelihood of his coup attempt.

In the end, the mainstream media, and especially its "journals of record" in their various forms, are more invested in access to the influential and affluent than in speaking truth to power. To state the plain fact that today's Republican Party is a right-wing extremist organization and a dire threat to democracy and the common good is to be avoided at all costs.

It's been a five-year, Moby Dick-like pursuit by the press in search of elusive responsible Republicans.  They all took a dive for Trump, and now that he's left the stage, the party is being ripped apart by his QAnon cult supporters.  Will there be a "reckoning" over the deadly insurrection? Not when 45 GOP senators are on course to vote no on impeachment.

Still, the press loves the narrative of honorable Republican men and women tossing and turning at night over Trump's nasty influence on the party. That storyline allows the media to treat the GOP as a mainstream entity. But it's not. It's become uniquely radical movement in American politics. That's not a story the press wants to tell.

There is abundant evidence of how radical, dangerous and extreme the Republican Party has become since the 1980s. The American public is now so polarized that politics is not simply a matter of reasonable disagreement over questions of policy and ideas. Political party membership and labels such as "liberal" and "conservative" have become statements of deeply held core personal identities and values.

Conservatives and Republicans, generally speaking, do not just see liberals and progressives as people they disagree with about politics. Instead, they are ready to view virtually all Democrats, including centrists like President Biden, as fundamentally different, as existential enemies who must be vanquished from the country. Democrats and liberals, in general, do not have the same level of intense existential animus and hostility toward conservatives — and if anything are overly eager to find common ground.

Political scientists and other researchers have documented that today's Republican Party has more in common with right-wing extremist or neofascist European political parties than with mainstream liberal-democratic ones.

The Republican Party also offers a clear example of asymmetrical polarization: Since the late 1980s, it has moved sharply to the right while Democrats, rather than moving to the left, have tried to chase the Republicans rightward in the belief that would keep them competitive in elections. In Congress, the result we see is that the most "liberal" Republican is far more "conservative" than the most right-wing Democrat. In all, the Republican Party's march toward the extreme right has made healthy and sustained democratic governance all but impossible in the United States.

To sustain all this, the Republican Party and the broader right-wing have created an alternative reality and episteme, an entire world of meaning where facts and empirical reality do not apply and Trump-style conservatism (with potent overtones of conspiracy theory) is a form of political religion. Any and all heretics are to be purged.

Ultimately, to present the ongoing crisis of the Age of Trump as an aberrant situation or an outlier is to implicitly assert that it has an easy, quick solution. In reality, it will be a long and difficult struggle to reform and rehabilitate American democracy with the goal of protecting it from fascism. The mainstream American media's obsession with finding and then elevating "reasonable" Republicans only serves to sabotage that struggle — and provides cover for Donald Trump and his successors, gnawing away at democracy far from the spotlight.