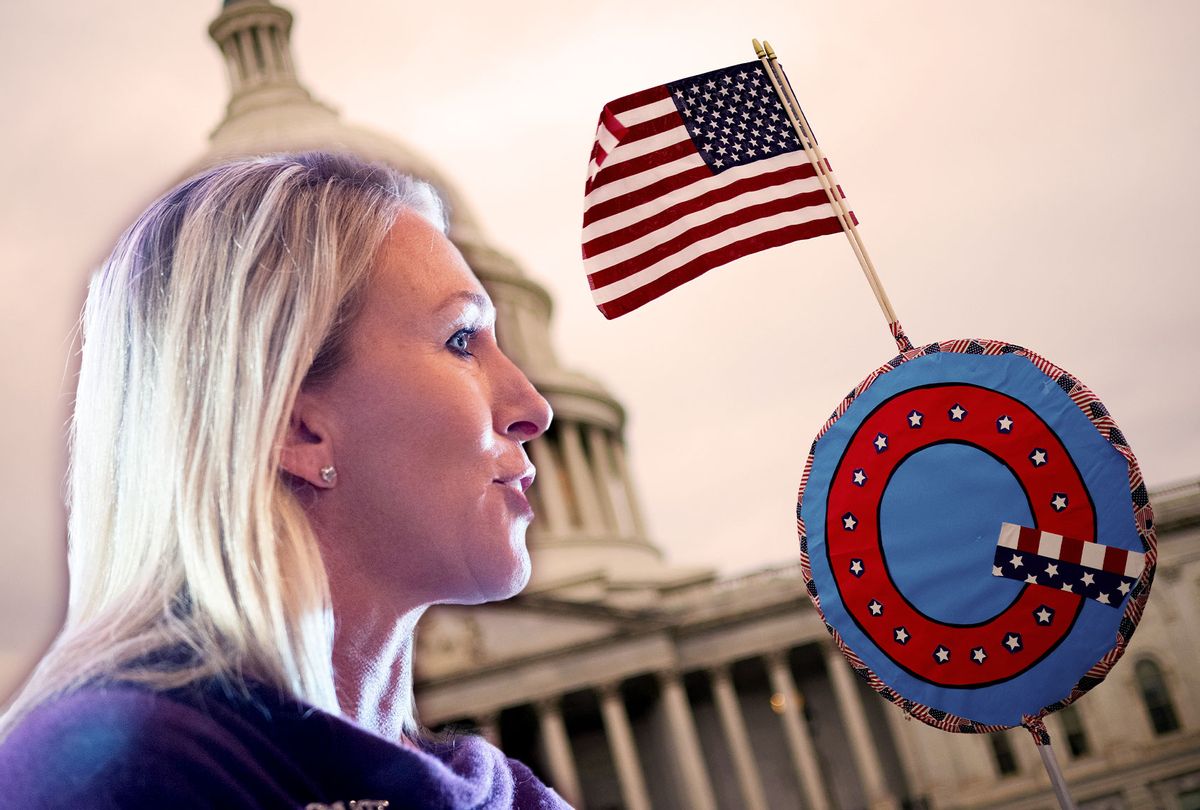 In the weeks after Donald Trump sent a violent mob to rampage the U.S.  Capitol on January 6, a lot of focus has risen on the role played by QAnon and other lurid conspiracy theories in radicalizing Republicans. Unfortunately, a lot of that discourse has centered around the idea that QAnon and similar conspiracy theories are the result of poor education or economic stress. Blame it on years of misleading media coverage misattributing the rise of Trumpism on "economic anxiety." Sadly, even Democratic leadership has slipped up and drawn a false equation between educational privilege and immunity to QAnon-style conspiracy theories.

"They can do QAnon, or they can do college-educated voters. They cannot do both," Sean Patrick Maloney of New York, the chair of the Democratic Congressional Campaign Committee, told Politico in an interview published Tuesday.

Maloney is spearheading the move to make Rep. Marjorie Taylor Greene, a newly-elected Republican from Georgia, the face of the GOP, complete with her love of violent threats against Democrats and conspiracy theories about fake school shootings and space Jews with laser beams. So far, the strategy has been effective, as the Republican minority in the House voted against removing Greene from her committees and even reportedly gave her a standing ovation. Politically and ethically, it's a smart move for Democrats, because it helps highlight for voters that the nutty faction has completely consumed the Republican Party and the supposed "reasonable adults" are non-existent.

But this rhetoric from Maloney does expose a potential downside. Falsely attributing QAnon and other conspiracy theories to poor education has the potential to reinforce ugly and often unfair stereotypes of Democrats as a "liberal elite" that looks down its nose at ordinary Americans and even the working class. This helps QAnon defenders like Greene or Tucker Carlson of Fox News present themselves as the voice of hard-working, salt-of-the-earth Americans simply defending themselves against "elites" — the same supposed "Democratic elites" that QAnon accuses of killing and raping children.

This framing isn't just likely to backfire on Democrats, it's also flat-out untrue. There is no reason to believe that QAnon is the result of a lack of educational opportunities. As with the Trumpism that gave birth to QAnon, the phenomenon is the result largely of privileged white people losing their minds because of perceived threats to their social status from people of color and cosmopolitan liberals.

Greene is being called things like "trailer trash" and "white trash" by liberals on Twitter who really should know better. But, as many of them are plainly shocked to discover, Greene graduated from the University of Georgia, inherited a successful construction business from her father, and is a millionaire who even owned a CrossFit gym.

This is more common than not with the high profile supporters of QAnon. Tucker Carlson, who defended QAnon as an exciting "forbidden idea," has money from the Swanson frozen foods empire, was educated at a boarding school and graduated from Trinity College. Sidney Powell, one of the Q-inflected lawyers leading the charge to overturn the election, graduated from the University of North Carolina. She spent her career as a well-regarded corporate lawyer on the right, especially for her work defending the high-profile wealthy executives caught up in the Enron scandal. Lin Wood, the Atlanta attorney who has also been heavily pushing Q-related election lies, graduated from Mercer University's law school. Q-promoting Michael Flynn is a former lieutenant general and graduate of the University of Rhode Island. Trump and his conspiracy theory-loving son Donald Trump Jr. are both literally Ivy League-educated, having graduated from the University of Pennsylvania. His other son, Eric Trump, has promoted QAnon conspiracies and graduated from Georgetown University.

We don't have much good information on rank-and-file QAnoners, who are largely anonymous internet users. But anecdotal evidence from r/QAnonCasualties, a message board for exasperated friends and family of QAnoners, suggests that it's quite common for people with high levels of education to fall down the rabbit hole. A sample of descriptions of people lost to the QAnon cult from their loved ones: "a highly educated and intelligent person," "a graduate of one of the United States Military Academies" with "a nearly 4.0 GPA," "intelligent, educated", "college degree, smart and inquisitive, high responsibility position in an energy firm," "an exec at an Investment Bank," and "has a college degree and has a MBA."

This reality should have been exposed by the stories and arrests that exposed the identities of the Capitol insurrectionists, all of whom were motivated by conspiracy theories and many who are deeply into QAnon. As Adam Serwer at the Atlantic notes, they were "were business owners, CEOs, state legislators, police officers, active and retired service members, real-estate brokers, stay-at-home dads." And as Will Bunch of the Philadelphia Inquirer pointed out, the rioters "came from lush-green suburbs all across this land, flying business class on Delta or United and staying in four-star hotels with three-martini lobby bars." One of the most prominent QAnon figures in the riot, Jacob Chansley, lost 20 pounds because he refuses to eat the cheap, non-organic food served in jail. Buzzfeed reported recently on public schools struggling with teachers — a class of people who are required to be college-educated — promoting QAnon and related conspiracy theories in class.

It's understandable that liberals and Democrats like Maloney are comforted by the idea that QAnon is the result of poor education. That narrative implies a solution, suggesting that better educational opportunities and teaching people critical thinking skills will prevent the uptake of dangerous conspiracy theories. It also casts the problem as one of a few cynical ringleaders manipulating the hapless masses.

But that story has it backward. The reality is that QAnon spread rapidly among privileged people — and often people with college educations and healthy economic profiles — because it was a story that recasts them as the good guys for doing something very bad indeed, which was voting for Trump. It's arguable that their privileges made them even more susceptible to the theories because they're people who are frequently told they're smart, leading them to feel confident about their ridiculous beliefs. They're people who feel a lot of entitlement, and that insulates them from challenges to their beliefs.

Republican leadership isn't pushing QAnon on the country. They are bowing down before it because they recognize the social and political power that the Q adherents have, and believe they need these people to win elections.

The single most damaging stereotype of Democrats is that they're a bunch of elitist snobs who look down their noses at the "uneducated" and "working class." In reality, of course, the party is the one that is more protective of the rights of working-class people, while Republicans are the party of a wealthy donor class mostly interested in tax cuts and gutting social services and unions. But comments like Maloney's can, unfortunately, reinforce these backward narratives that cast Democrats as "elites" and Republicans as salt-of-the-earth "real" Americans.

To counter this, Democrats would do well to emphasize, repeatedly, how QAnon is the temper tantrum of a class of privileged white people, like Greene, who feel like their social status is being threatened by changing demographics and social justice movements. It's not only politically wise — it happens to be the honest truth.