Senate Republicans can whine all they want — but if they vote to acquit Trump, they're throwing in with the QAnoner 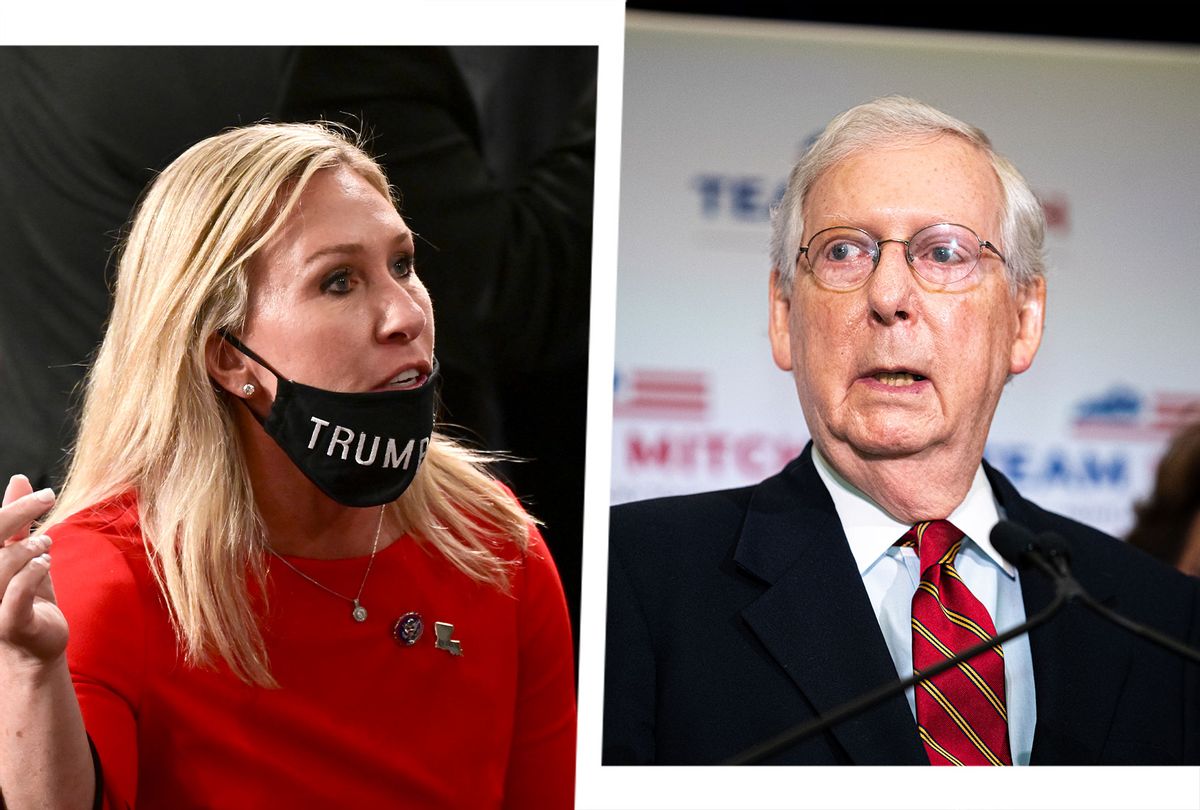 Rep. Marjorie Taylor Greene, the QAnon-loving construction heiress who recently won a deep-red congressional seat in Georgia, is getting quite a bit of attention for her nutty, violent, and racist views that she has long enjoyed sharing freely on social media. There is no doubt that she's a doozy, from her 2019 video demanding that her followers "flood the Capitol" and use violence "if we have to" to her 2018 Facebook post blaming wildfires on Jews with space lasers. Democrats in Congress have been making hay over Greene's committee assignments, using the presence of someone who stalked a school shooting survivor on the House Education and Labor Committee to embarrass House Minority Leader Kevin McCarthy and highlight the way that extremism has been mainstreamed in the GOP.

The whole situation is apparently too much for Senate Minority Leader Mitch McConnell, R-Ky., who started to insult Greene in public on Monday, in a belated bid to suggest that the QAnon faction is more fringe in the Republican Party than it actually is. "Loony lies and conspiracy theories are cancer for the Republican Party and our country," McConnell groused in a statement that did not name Greene explicitly.* Sen. Todd C. Young of Indiana, a close colleague of McConnell's, picked up the baton on Tuesday, calling Greene "nutty" and "an embarrassment to our party."

It's tempting to be comforted by these words and to imagine that powerful Republicans are drawing a line in the sand when it comes to how far the party will go in catering to the extremist element. In reality, however, it's just a feint to make McConnell appear to be a reasonable person while he continues to empower and support the fascistic faction of the GOP. This is about looking good to the cable news pundits while not doing anything substantive that would actually curtail the power of the Trumpist right.

As usual, this is a situation where it's more useful to look at what Republican leadership does, rather than what they say.

What Republicans are planning to do is let Trump off the hook for inciting a violent insurrection at the Capitol on January 6. Ninety percent of Senate Republicans voted against even holding a trial for Trump, using nonsense procedural objections, because they know full well that he's guilty and can't be defended on the merits.

There is no wiggle room here: Acquitting Trump is endorsing his insurrection. Trump himself made that clear by getting rid of a legal team that expressed queasiness about centering his lies about a "stolen" election. His new lawyers are more willing to make Trump's false claims about election fraud part of their defense.

Senate Republicans want to have it both ways. They want to encourage and benefit the kinds of conspiracy theorists that stormed the Capitol, because they think pandering to these people — and coddling their "god-emperor" Trump — is the way to win elections. But they also don't want to look like a bunch of loons and fascists, wanting to present themselves as eminent statesmen on the Sunday shows. That's why Senate Republicans are flipping out over the very idea that the House impeachment managers might bring forward actual evidence in Trump's impeachment trial next week. Sen. Lindsey Graham of South Carolina was so freaked out at the idea of hearing testimony from victims of the Capitol riot that he made a bunch of impotent and incoherent threats that he would retaliate by having "the FBI to come in" to talk about "the security footprint at the Capitol." (Not sure why this would bother Democrats, who have also criticized Capitol security and even forced the Capitol Police chief to resign.)

It's no mystery why Graham and other Republicans don't want Democrats airing live testimony from Capitol officers and congressional staff who were assaulted and terrorized by rabid Trump fans attempting to overturn an election. The severity of the injuries and the trauma will underscore how truly depraved it is of Senate Republicans to acquit Trump of his crime.

Greene makes an easy scapegoat for Republicans. For one thing, she's a woman, and it's always easier to make a spectacle of women in power than it is to do the same to men. Note that McConnell and his buddies aren't targeting Rep. Matt Gaetz of Florida, even though he was filmed cheering on the insurrectionists at the Capitol, or Rep. Madison Cawthorne of North Carolina, who keeps doing uncomfortably Nazi-friendly stuff.

For another thing, Greene relishes the attention, dramatically playing the victim of "career politicians" who "murdered babies with your tax dollars." Few, if any, people have ever been so excited and eager to step into the role of the bug-eyed lunatic here to make the rest of the caucus seem saner by comparison.

But it's all a charade.

Even if Republicans toss Greene on her duff, the larger problem — that the party is catering to a radical minority who supports the insurrection and has soured on democracy itself — remains in place. We know this because Republicans are doing everything they can to shield Trump from the consequences of inciting an insurrection. If Republicans really wanted to clean house, they'd start by convicting Trump and barring him from running for president again. Their unwillingness to do this shows that the GOP really is the party of QAnon now, regardless of what happens to their most obnoxious new congresswoman.

*Correction: Salon incorrectly reported that McConnell's statement explicitly named Taylor Greene. McConnell did not mention Greene by name in his statement and this column has been corrected to reflect that.