A reporter was ejected and nearly arrested after asking Rep. Marjorie Taylor Greene a question at her town hall 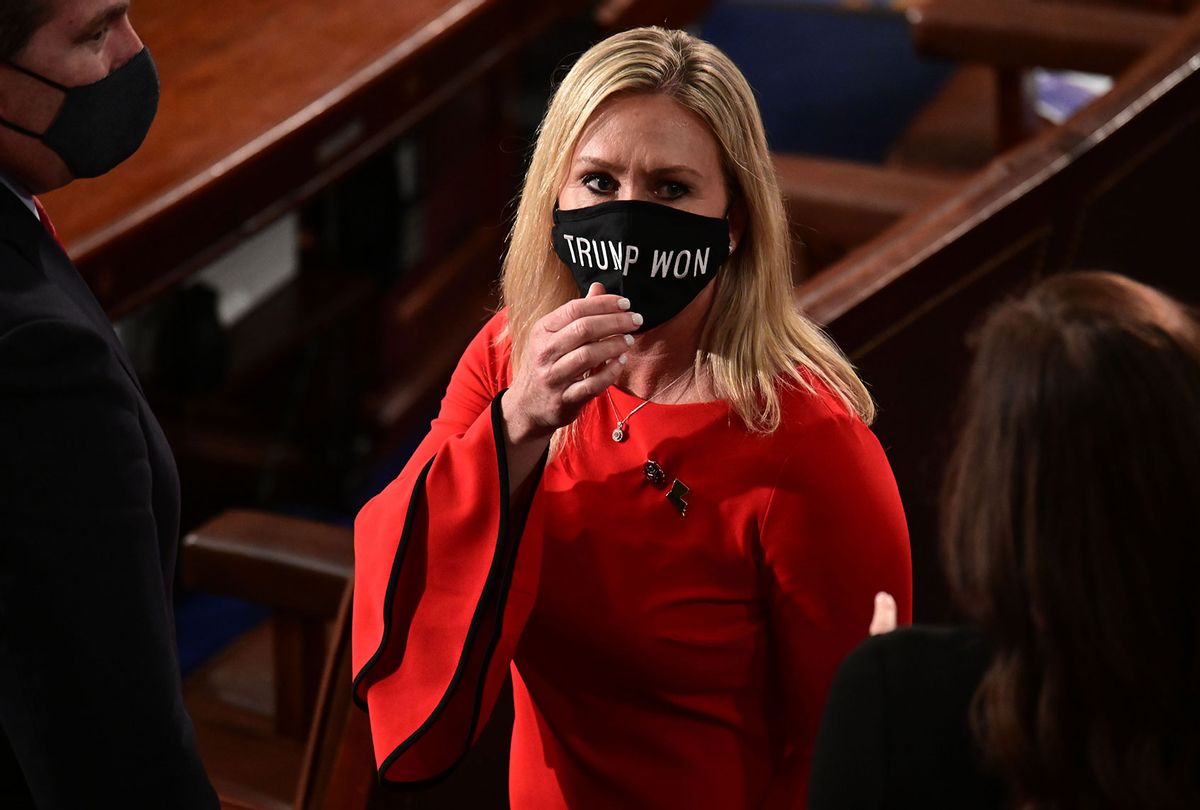 After getting a reporter nearly arrested on Wednesday for asking her a tough question at a town hall, Rep. Marjorie Taylor Greene, R-GA, the infamous freshman Republican House member known for her QAnon and anti-mask beliefs, is now facing intense criticism from her colleagues, including some whom she previously called for violence against.

The local reporter, Meredith Aldis with Chattanooga's WRCB, was invited into Greene's event with press credentials. However, when Aldis asked Greene about her past support of violence against members of Congress on social media, Greene blew up.

"I'm talking to my constituents!" she insisted, "This isn't a press conference."

Aldis rebutted that she herself is a taxpayer, but Green ignored the reporter, waiting for her staffers and the Whitfield County Sheriff's deputies to escort Aldis out of the event, during which Aldis says she was threatened with an arrest. According to Patrick Filibin, a Chattanooga Times Free Press reporter attending the town hall, Adlis' ejection "was instant, like they were taking no chances."

Those who attended the event were required to submit their questions for Greene beforehand, leaving little opportunity for Greene's constituents to challenge her on her past, current (and likely future) improprieties. During the town hall, Greene reaffirmed her support for impeaching President Joe Biden, outlawing abortion, and discriminating against transgender student-athletes.

In 2019, Greene liked a comment on Facebook that suggested Speaker of the House Nancy Pelosi, D-CA, should receive "a bullet to the head." In 2018, Greene also liked a comment calling for President Barack Obama and other Democrats to be hanged for facilitating the Iran Deal, which Greene framed as a nefarious conspiracy.

"Your conduct does not reflect creditably on the House, and you should resign," Democratic Rep. Don Beyer of Virginia tweeted to Greene.

Greene has also bandied the notion that the 2018 Parkland shooting –– in which 17 people were killed and another 17 injured –– was a false-flag affair, or a "planned" event meant to obfuscate who is criminally liable. A video recently surfaced of Greene harassing one of the teenage victims of the shooting, David Hogg, a founding member of Never Again MSD, a student-led political action committee aimed at pushing lawmakers to enact tighter gun control regulations. Greene called Hogg, eighteen at the time, "a coward" and likened him to "little Hitler."

Following the barrage of social media skeletons that have surfaced from Greene's closet, several members of Congress have called for her immediate removal.

On Wednesday, Rep. Jimmy Gomez, D-CA, vowed to introduce a resolution to expel Greene from the House, a move unlikely to procure the two-thirds vote it needs remove the freshman. House Minority Leader Kevin McCarthy, R-GA, promised to have a "conversation" with Greene in light of her indecency — but he first assigned her to plum committee assignments, like on Education and Budget, respectively.

McCarthy "must explain how someone with this background represents the Republican party on education issues," House Education and Labor Committee Chairman Rep. Robert C. "Bobby" Scott, D-Va, said in a statement.

"The GOP conference committed an offensive error in placing her on the committee," Michigan Democratic Rep. Haley Stevens, who serves on the Education and Labor Committee, told CNN. "I am praying for Rep. Greene and I hope the GOP conference moves swiftly to right this wrong."

Filibin expressed that Greene has a tendency to avoid uncomfortable questions, often diverting blame to others. For example, when pressed on her controversial social media activity, Greene blamed those running her account and decried media bias, "saying that the media doesn't cover her other posts about Bible verses, congratulating friends on social media, etc."

In June of 2020, Greene posted on Twitter, "I have read a book on leadership. It's called the Bible [...] Only twisted lies tickle your ears and make you feel good." However, with Greene finally being called upon to answer for her lies, one would hope she's feeling a little less "ticked" than usual.