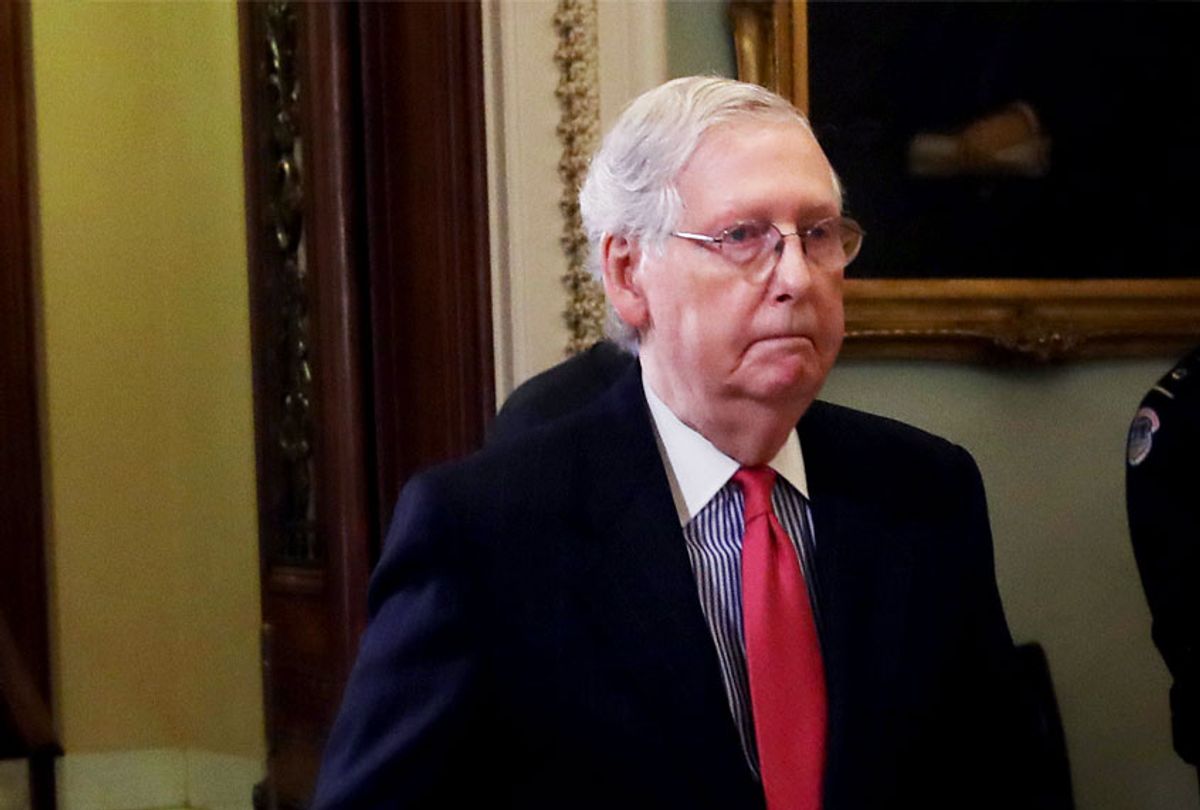 Now that Donald Trump is down and almost out, our major media news organizations seem to have finally acknowledged that nothing that comes out of his mouth can be trusted. They no longer consider him credible — not only about the election results, but also about the pandemic and its devastating economic consequences. His astonishing lack of empathy is now accepted as a given, as is the fact that he is exclusively interested in himself.

But what of Mitch McConnell? Yes, after six weeks, the Senate majority leader finally acknowledged the results of the election. But is what he is saying about the pandemic and the economy any more credible than what Trump is saying? Are his utterly transparent motives any less venal?

Unlike Trump, McConnell really matters right now. After singlehandedly holding up a second stimulus package for seven agonizing months (the House passed a big one in May) McConnell is suddenly responding to political expediency (Republican Senate races in Georgia upon which his hold on power depends) by allowing a vote on a wildly meager one.

It's not Trump who is holding the country hostage to his whims any more, it's McConnell. (Well, it's always been McConnell, right behind him, backing him every step of the way.)

But the press coverage?

The press coverage is everything that's wrong with modern political journalism.

Rather than "taking sides," elite political reporters are focusing their attention on the game-playing, and presumptively afford both sides equal amounts of credibility regardless of the reality or the history. The "problem" is not caused by anyone or anything in particular, it is simply "dysfunction." And the only thing that matters is movement.

Most of the articles about the debate over stimulus legislation, for instance, shed no light on how we got to such a sorry state of affairs, who's responsible, what is actually needed or what the bill actually does. It's a whole lot of both-sides stenography, murmurs about compromise, and speculation about what yard-line we're on.

"Congressional leaders try to clear final hurdles in sprint to finish coronavirus relief package," says the Washington Post headline. "Final stretch on COVID-19 economic relief, but no deal yet," says the Associated Press. The fine folks at Politico call it "the latest evidence Washington is broken: at the peak of the worst public health crisis in a century, the White House and Congress are struggling to deliver another round of relief." On NPR, when Scott Simon asked senior political editor Ron Elving why the relief bill was taking so long, Elving replied: "I still can't give you a reason, Scott, other than gridlock politics." As time goes by, he said, "that just makes both sides a little less reasonable."

Amazingly, it doesn't even seem to matter to congressional reporters that McConnell has provided no cogent argument for why he's blocking desperately needed aid. He doesn't need to explain! It's just taken as a given. As I wrote last week, the absolutely unparalleled, truly radical obstructionism by McConnell and his caucus has become normalized — even internalized — by the congressional press corps.

It's not that reporters don't know better. It's just that whatever the facts are, they continue to shoehorn them into the age-old congressional reporting tropes about both sides slogging it out to the finish line.

The enabling by congressional Republicans of Trump's four-year reign of malign, anti-democratic incompetence goes unmentioned. This is the party that literally has no platform other than whatever-Trump-says. These are the members of Congress who lied about the "middle-class tax cut" and defended Trump during the impeachment trial, against all evidence. Just two weeks ago, only 27 congressional Republicans were willing to admit to the Washington Post that Biden had won the election. Even now, McConnell is trying to avoid a congressional vote to overturn the election results not because it's ridiculous, but because if some members voted for reality it would infuriate Trump.

Political reporters need to shift some of their toxicity from Trump to McConnell and the party he now effectively leads. He's not as public or impulsive as Trump. But he's equally devoted to spreading misinformation. And while he is not as personally narcissistic as Trump, he is equally single-minded and devoted to a personal goal that has nothing to do with governing well: In McConnell's case, as has been amply documented, that goal is keeping the money flowing in order to take and retain power for the Republican Party.

He is as shameless as Trump in projecting his own conduct onto the opposition. He declared on Sept. 30, "The American people are still hurting. Layoffs are still mounting. Families need more help and the healthcare fight needs more resources. One side voted to supply all that help. The other side decided to block it." He declared on Dec. 9 that "we can't do a thing unless the Democrats decide they want to make law."

His level of cynicism is almost hard to believe. As Timothy Noah wrote for the New Republic:

Meanwhile, a framework that McConnell proposed on December 1 … consisted mostly of business subsidies — including, in a nice touch of self-parody, an expansion of the business-meal deduction to 100 percent, up from the Cares Act's already hard-to-defend increase to 50 percent in March. Before Covid-19, the so-called three-martini-lunch deduction was 30 percent.

At no point has McConnell made any secret of his true intentions. From the get-go, the only issue that has animated him has been his demand to protect companies from liability for infecting workers and customers. He warned of a "second pandemic" of "lawsuits against doctors, nurses, hospitals and brave business people who are opening up" — although that pandemic is entirely mythical.

His real goal has been obvious to anyone paying attention. Amee Vanderpool, who writes the "Shero" newsletter, explained "What McConnell's Corporate Immunity Really Means":

At the center of the McConnell induced stalemate is the concept of granting corporations total immunity from civil and criminal liability, even if they recklessly endanger consumers and workers during the pandemic. This would mean that no employee or consumer could sue a business for any intentional or negligent harm caused, even in the most egregious of cases. This is a protective shield, being pushed in Congress by corporate lobbyists, who are committed to ensuring the cash flow for corporate business at any cost, including ensuring that Mitch McConnell is richly rewarded in exchange for selling out America.

"In most areas of public policy, there are groups that advocate for certain reforms," he said. "Then they wait around for some crisis to come along where they can present their reform as a solution to the problem of the day." With just such a crisis at hand, representatives for the hospital and nursing home industries have lobbied hard for liability protections at the state and federal level.

Sen. Sheldon Whitehouse, D-R.I., offered his own answer to Jones' question on Twitter:

The reality is that Republicans seem to be trying not to let a good pandemic go to waste by achieving long-held goals of insulating businesses from liability for their own carelessness. They are risking public health to do it. Congress shouldn't let them.

In an outlier story from a major news organization, Sarah D. Wire and Jie Jenny Zou of the Los Angeles Times did an admirable job of describing how it might affect the public:

But despite the centrality of liability to the entire drama, most mainstream media news articles about the stimulus negotiations barely even mention liability or, when they do, employ dry, utterly non-descriptive language.

Democrats were so overwhelmingly opposed to McConnell's liability provisions that he simply blocked any movement on the stimulus bill at all for over half the year — until he realized that the two vulnerable Georgia Republicans, Kelly Loeffler and David Perdue, were "getting hammered" on the lack of federal aid. Rather than give up, McConnell split off liability and the element of the stimulus he despises the most — relief to struggling state and local governments — into a separate bill to be considered later.

The need for a second stimulus has been manifestly urgent since the House passed its bill in May, but media interest while McConnell balked was minimal. It picked up in some places as a deadline approached, but even then, the broadcast networks weren't interested. As Media Matters for America reported on Dec. 15:

And they pretty much ignored the liability issue:

When the networks got the chance to interrogate lawmakers, they questioned only Democrats, rather than members of the party insisting billions of dollars be put toward protecting businesses from being sued for mishandling the pandemic.

Andy Slavitt, who ran the Centers for Medicare and Medicaid Services under Barack Obama, laid out the compelling anti-McConnell argument in a tweetstorm in early December. It went in part:

Congress has broken the most significant compact with the public in my lifetime…..

In failing us, the Congress has helped turn the country against one another. Has made us more cynical in our politics. Less trusting of our government.

None of those things strike me as things that bother Mitch McConnell in the least.

Even some NeverTrump Republicans have realized that McConnell is the big problem going forward. It was funny to watch New York Times columnist David Brooks the other day start by complaining that the legislative branch is so broken "it can't address even our most glaring problems," but ultimately find himself forced to admit it is McConnell who broke it.

It's long past time for the Washington press corps to stop covering up for Mitch McConnell. But it's particularly urgent now.