Can we save American democracy, if it was never a democracy to begin with? 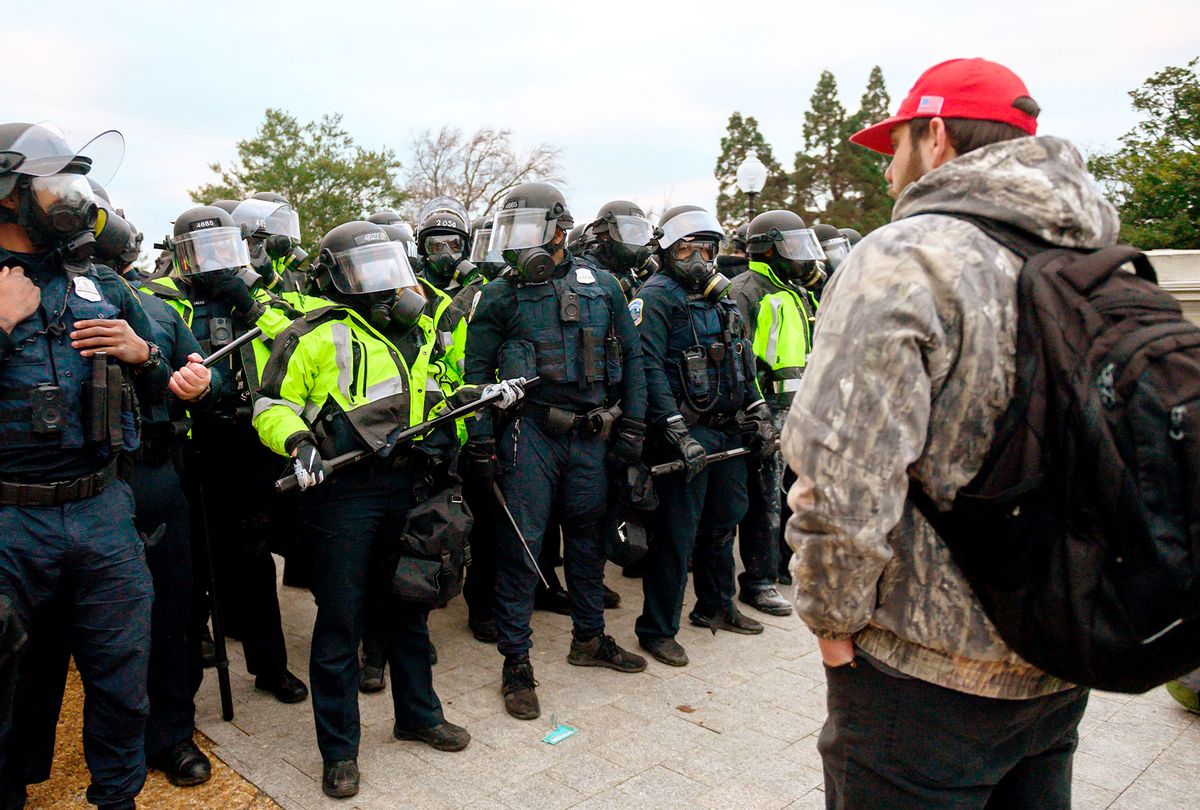 Trump supporters face off with police and security forces in front of the US Capitol in Washington DC on January 6, 2021. - Donald Trump's supporters stormed a session of Congress held today, January 6, to certify Joe Biden's election win, triggering unprecedented chaos and violence at the heart of American democracy and accusations the president was attempting a coup. (ANDREW CABALLERO-REYNOLDS/AFP via Getty Images)
--

America has a democracy problem.

The Republican Party is an anti-majoritarian, anti-democratic and white supremacist organization. To that end Republicans and their allies have launched a nationwide campaign to stop Black and brown people — and any other groups likely to support the Democrats — from voting.

The Georgia House voted 97-72 along party lines to approve a bill that would limit Sunday voting to a single day, restrict mail ballot drop boxes to early voting locations, require voter ID for mail ballots, set the deadline for voters to request mail ballots to 11 days before the election, and cut the amount of time between general elections and runoffs from nine weeks to four. The bill would also ban nonprofits from helping fund elections, ban the state from sending out mail ballot applications that were not requested, restricts the use of mobile voting buses to emergency situations, and even bars anyone from giving free food and drinks to voters waiting in line. ...

Georgia's extreme voting restriction push is the centerpiece of a national Republican push to shrink voter access after losing key elections amid record turnout. Lawmakers in 43 states have already rolled out more than 250 restrictive bills, according to an analysis by the Brennan Center for Justice.

On Tuesday, former President Jimmie Carter said the Republican Party's war on democracy as seen in Georgia made him feel "disheartened, saddened and angry."

The language used by Republicans and their allies to legitimate their collective war on democracy is an example of the way propaganda often involves accusing an enemy of precisely that which you yourself are doing. To that end, Donald Trump and his allies have spread the "Big Lie" that there was voting fraud in the 2020 presidential election when in fact any fraud was committed by them.

Moreover, Republican propaganda also involves a strategy of inversion, where "election integrity" and "protecting the vote" mean exactly the opposite: The only votes that should be counted are those cast by white Republicans.

Of course, voting matters. If it did not, the Republican Party and its allies would not be so desperate to stop black and brown people and other groups who overwhelming support the Democrats from voting.

But in these very important conversations and concerns, a fundamental question is not being asked: Is the United States really a democracy? Do we have a form of government, or a society, in which elected officials show respect to the (reasonable and reasoned) will of the people as broadly construed, are bound by the rule of law and the Constitution, and act in service to the common good?

Of particular note, there are institutional and structural subversions that prevent America from being a healthy representative democracy. Among these are the Electoral College, the design of the U.S. Senate, the abuse of the filibuster in that same institution, the geographical "sort" in which Democrats are concentrated in large metropolitan areas while Republicans are more dispersed ,and practices like gerrymandering and voter suppression that deliberately distort elections and defeat the popular will. These things have created a system in which the influence of a comparatively small number of Americans in "red states" have a wildly disproportionate influence on national politics.

Civil rights and other watchdog organizations such as Freedom House have warned that since the beginning of the Trump regime the United States has increasingly succumbed to anti-democratic norms and values. Our nation is not yet a failed state, but is experiencing significant "democratic backsliding." In one worst-case scenario, the United States is at substantial risk of succumbing to "competitive authoritarianism," a system which appears to be "democratic" but where the dominant party has effectively rigged the outcome in its favor.

Political scientists Larry Bartels, Martin Gilens and Benjamin Page have demonstrated that federal representatives are largely unresponsive to the demands of most Americans and instead defer to the rich and powerful.

The Republican Party and the Trump movement have now embraced terrorism and other forms of political violence to obtain and hold power. As shown by public opinion polls and other research, white right-wing voters and those who share their values and beliefs are willing to overthrow American democracy in order to maintain their status as the dominant racial group in the country.

To further complicate matters, American democracy rests upon a foundation of white (male) supremacy where the boundaries of democracy itself were drawn along the color line. American democracy was conceived of by white elites (and others) as fundamentally defined by whiteness. People defined as "not white," especially Black people, were explicitly — and then implicitly — excluded from membership in the polity.

Moreover, in America one's distance from "blackness" has historically and remains a kind of stepladder or measuring stick to define a person's capacity and eligibility for full and equal citizenship.

In so many ways, the Republican Party and the white right's efforts to create a new version of Jim Crow are very much in keeping with the worst aspects of the country's past and present.

On issues such as COVID relief, gun control, health care, the environment, tax policy, military spending and the strength and breadth of the country's social safety net, the genuine preferences of the American people are almost entirely ignored by the Republican Party. Although the Democrats are not behaving to the same extreme, they also are not fully responsive to the will of the American people because of the influence of corporate capital and the pernicious ideology of gangster capitalism (what others more benignly describe as "neoliberalism").

What can be done to make America a real democracy, in the best spirit of the concept?

For starters, Democrats in Congress must enact the For the People Act and the John Lewis Voting Rights Advancement Act. These laws are essential next steps for stopping the Republican assault on American democracy.

The Citizens United decision and other laws which enshrined money as a type of free speech must be reversed or overturned, almost certainly through legislative action. The influence of "dark money," super PACs and other corrosive influences on the country's electoral process and the responsiveness of elected officials must be greatly limited by campaign finance reform.

More important still, the United States needs a program of democratic renewal across the public sphere. This would include teaching the virtues of democracy by expanding civic education in the country's schools, protecting unions and other spaces where positive collective action is cultivated, and subsidizing small and regional newspapers and other independent news media.

America's social safety net must be expanded and strengthened. Minimum wage and other economic supports — especially a national living wage and affordable health care — should be substantially increased as a means of guaranteeing that the average American has more opportunities to enjoy their freedom and be a more engaged and active citizen.

The Republican Party and the neofascist Trump movement must be stopped — not just at the polls or through legislation but also through a full commitment to defending, renewing and expanding American democracy throughout society.

Ultimately, there must be a paradigm shift among the country's political class that begins by accepting reality: The Republican Party's long-term assault on American democracy is not "just" a political problem, but also a cultural problem. Failing to understand the crisis in those terms all but ensures that American neofascism will continue to grow, and likely will smother the country's multiracial democracy in its infancy. If that happens, the consequences for the American people — and the entire population of the planet — will be dire.