The power of the Big Lie: Why do 30% of Americans cling to Trump's dark fantasy?

Nearly a third of Americans have surrendered to disinformation. The result could be a death spiral for democracy 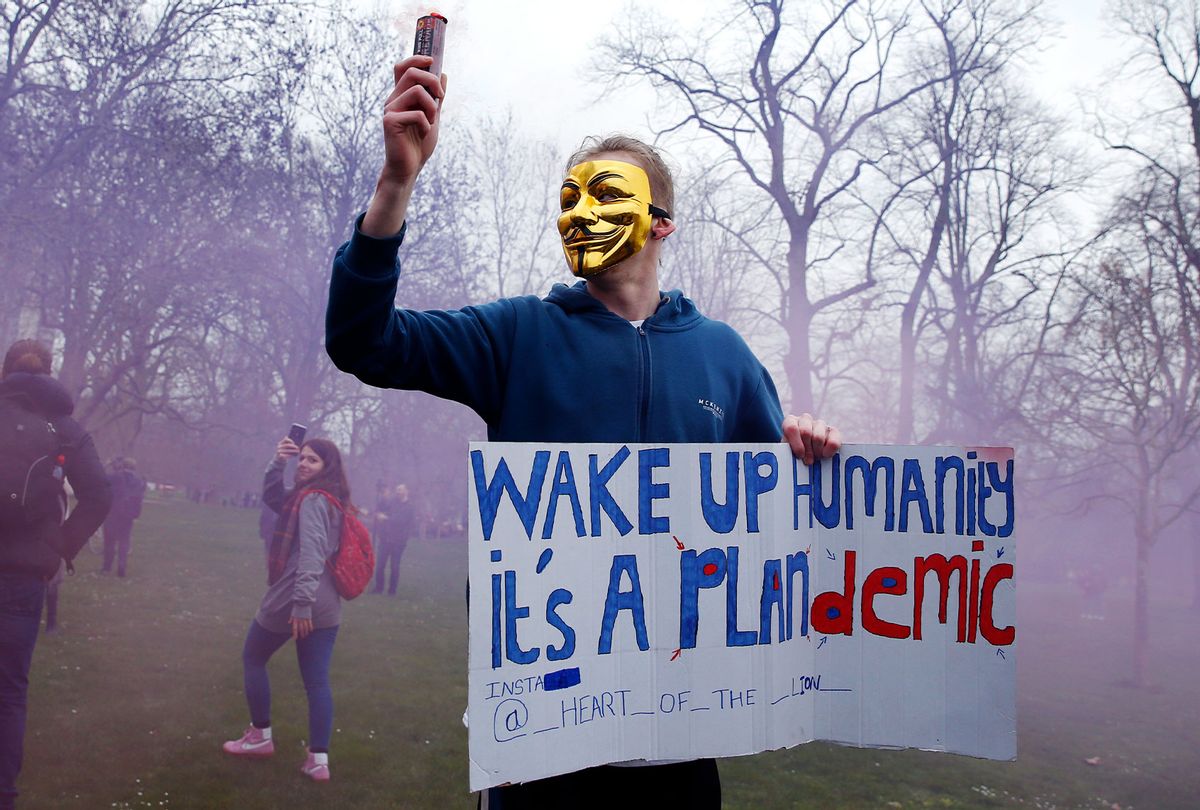 A protester with a flare poses holding a sign calling for people to "wake up" during a "World Wide Rally For Freedom" protest, a QAnon adjacent conspiracy-theory movement. (Hollie Adams/Getty Images)
--

There is the Big Lie — Donald Trump's false claims of election fraud that are driving all manner of anti-democratic beliefs and behavior. But that Big Lie is supported and reinforced by all the little lies that make it real. In a highly polarized society where one political party is attacking the foundations of democracy and the neofascist movement continues to grow, public opinion is no longer a basic matter of collective beliefs about matters of public concern. Public opinion is now a function of personal identity, existential core values and the understanding of reality itself.

As political scientists and other researchers have shown this dynamic is especially true for Republicans and other "conservatives."

In that way, the Age of Trump and its aftermath resemble a science fiction dystopia where people exist in their own personal realities, through a type of experience machine that connects them to others who believe the same things — however untrue or fantastical they may be. That hive-mind has taken shape around us in the form of TrumpWorld and the MAGAverse.

The Big Lie that unites the Trump political cult — and unfortunately a large number of other Americans as well — is that Trump is still the legitimate president and that the 2020 election was "stolen." As seen on Jan. 6, this Big Lie and its associated little lies are a way of encouraging political violence and legitimating the Jim Crow Republicans and their war on multiracial democracy.

How many Americans have been willingly seduced by the Big Lie in its various forms? It appears the number is around 30 percent. Philip Bump of the Washington Post reports that since no credible evidence of widespread election fraud has ever emerged, we might have assumed "that the burst of speculation that the election had somehow been stolen might fade over time. That Americans predisposed to assume that President Biden had taken office only after a massive effort to steal the vote would consider the collapse of every effort to prove that point as evidence that perhaps that wasn't what happened." As we now know, such was not the case. Bump continues:

On Monday, Monmouth University released polling showing about a third of Americans think Biden won only because of voter fraud — the same fraction of the electorate that held that view in Monmouth's polling in March, in January and in November.

Despite the lack of credible evidence for the claim and the amount of time that has passed during which such evidence could have emerged, Americans are as likely to ascribe Biden's victory to unfounded claims of fraud as they were seven months ago.

To this point, belief in the Big Lie shows little sign of dissipating. The negative implications are many: Democracy is undermined when there is no shared understanding of basic facts and empirical reality; political violence becomes seen as acceptable when a Democratic administration is viewed by Trumpists and neofascists as illegitimate; any notion of the common good and shared public interest becomes impossible, which in turn makes the neofascist movement and its "solutions" more attractive to potential followers.

In total, the 30 percent of Americans who have been propagandized by the right-wing have abandoned the critical thinking skills and decision-making abilities required of responsible citizens in a healthy democracy.

How did this happen? The primary explanation is that decades of exposure to the right-wing disinformation news media conditioned conservative viewers to believe that lies are truth, and that right-wing dogma is equivalent to empirical evidence and proof.

There are other causes as well. These include individual and collective narcissism; a neoliberal regime of economic uncertainty and extreme wealth and income inequality; social atomization, loneliness and the culture of cruelty; a broken public education system that increasingly produces human drones and not critical thinkers; a debased culture in which people increasingly define themselves as consumers or even "brands"; white racial resentment and white supremacy; fear of social change; anti-intellectualism and anti-rationality, manifesting in such social forces as conspiracy theory and right-wing Christian fundamentalism; and a hollowing out of social democracy.

In search of further explanations, I reached out by email to Texas A&M communications professor Jennifer Mercieca, an expert on political rhetoric and author of the recent book "Demagogue for President: The Rhetorical Genius of Donald Trump." She responded:

There are several things going on here that prevent Republicans from believing that Biden legitimately won the election: first, is the "filter bubble" effect — the news conservatives trust tells them that Biden did not win legitimately and the news that they don't trust tells them that he did. It's easy to ignore the news that they distrust, they may never even hear the correct facts. Second, the "illusory truth" effect, which says that if something is repeated enough that people will believe it. Conservatives have heard since 2016 that Democrats cheat at elections, that they can't be trusted and Trump could only lose if they cheat. Third, the "self-sealing" nature of conspiracy in general. Once a conspiracy takes hold it can never be disproven. Fourth, motivated reasoning. Conservatives want to believe that they won, so that means that Biden had to cheat. Fifth, the issue falls into what persuasion theorists call the "latitude of rejection." When people have their minds made up about something, then they aren't open to persuasion — especially if they have their minds made up against something.

This is still an open issue on conservative news channels. Every day there is a new update to the story of how the election is still being litigated and investigated. People who consume that media have reason to hope that the proof will be found, and Trump will still win. That hope is being nurtured by the media they consume. Others may prudently decide not to make up their minds until all the facts have come out, which means they'll continue to entertain the possibility that Biden cheated.

Six months after the attack on the Capitol triggered by that lie, commentators, political scientists, and families around the dinner table still struggle to come to grips with perverse reality. It is natural to want to understand how we got here. The fate of our democracy turns on not just what our electorate believes but why they believe it. Why are a third of us such gullible rubes? ...

We were raised on lies — including many lies that are much, much bigger than the big one that troubles us today.

That's the problem. We are as a society — and by "we" I mean virtually all of us on the planet — brought up to believe howling absurdities, ridiculous impossibilities, and insupportable malarkey from our very first moments on Earth. We have massive lie-delivery systems that are the core institutions of our society. And we have created cultural barriers to even questioning those fabrications which are most deserving of skeptical scrutiny.

TrumpWorld will not magically disappear even if policies are put in place that protect the right to vote, rein in the right-wing disinformation machine or otherwise inhibit the neofascist assault on democracy and freedom. As historians, political scientists, philosophers, social psychologists and other experts have repeatedly warned, fascism is as much a cultural problem as a political one.

Solving America's democracy crisis will require a broad strategy of renewal and reckoning. To that end, if American society is to be made immune to fascist demagoguery, the country's people and leaders must ask and answer hard questions about their values and behavior. Trumpism and neofascism are much more than a question of whether our "institutions" will hold. They are a fundamental test of national character — one it is not yet clear whether America will pass or fail.