Do we even want the truth? The Capitol riot is fading into the memory hole

Republicans have distorted the narrative, and a true accounting may never happen. Does America just want to forget? 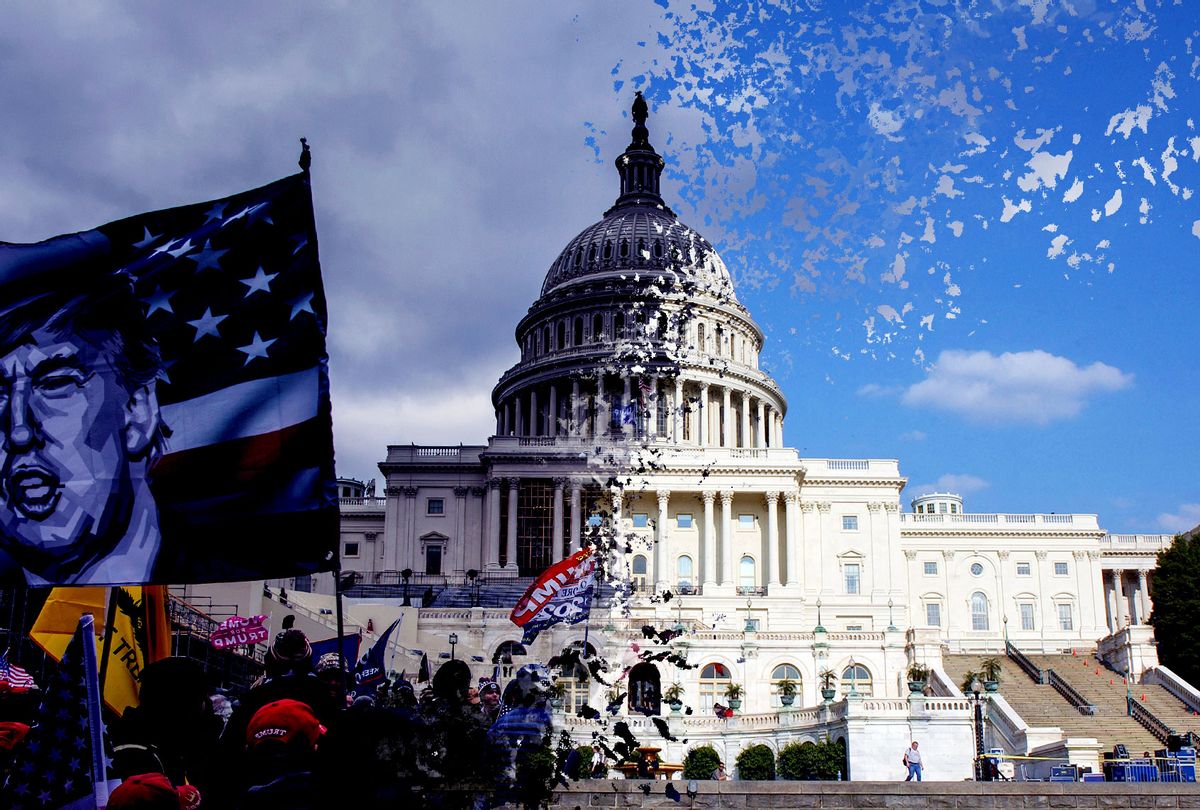 On Jan. 6, Donald Trump's followers launched an attack on the U.S. Capitol as part of a larger effort to nullify the results of the 2020 presidential election — and, in effect, overthrow American democracy.

Hundreds of Trump's foot soldiers who participated in the attack on the Capitol have been arrested. Many of them, however, will not be charged with serious crimes because the Justice Department is focusing its attention on those offenders deemed to pose the greatest threat to public safety and national security. Trump and the other Republican co-conspirators in the coup attempt will likely escape any criminal charges for their role in those events.

This evasion of responsibility and accountability is part of a larger pattern of organized forgetting and willful national amnesia. To this point it appears nearly certain there will be no truth and reconciliation commission to address the crimes of the Trump regime and the harm done to American society and democracy in its name. Large-scale criminal investigations of the Trump family and inner circle also appear unlikely.

Elected Republicans, by and large, were co-conspirators in the coup attempt. It is in their obvious self-interest to stop any and all investigations into their role in the Jan. 6 attack. The Republican propaganda machine continues to amplify the "Big Lie" that the 2020 presidential election was "stolen" from Donald Trump. As part of that lie, the right-wing propaganda machine has also crafted a narrative in which Trump's followers who attacked the Capitol are "victims" and "patriots," innocent of any malicious intent or serious wrongdoing. Such lies will only encourage more right-wing terrorism and other political violence.

Taking a cue from President Biden, the Democratic Party's leaders want to focus on their policy successes instead of doing the hard and necessary work of forcing a proper public accounting for the crimes and other acts of malfeasance committed by the Trump regime and its allies.

The American people are understandably traumatized and exhausted after the last four or five years, which has led too many of them to convince themselves that a return to "normal" will solve the country's problems and somehow erase the nightmare of the Age of Trump.

The hope peddlers and professional stenographers in the mainstream American news media have also largely moved on from the events of Jan. 6 and its immediate aftermath. There are, however, some public voices who continue to demand accountability.

At the New York Times, Jesse Wegman explains how Republican fictions about the events of Jan. 6 make a commission urgently necessary:

Now that lie has metastasized to include an upside-down history of what happened on Jan. 6, regurgitated by many top Republicans — hence the right-wing agitprop fantasy in which shadowy leftist militants were the true villains.

It's no surprise that roughly half of Republican voters now say they believe that the riot was a largely peaceful protest or that the only violence was committed by "left-wing activists" or others "trying to make Trump look bad," according to a Reuters/Ipsos poll. An overwhelming majority of Republicans continue to believe that Joe Biden did not legitimately win the presidency.

This mass delusion is one of the main reasons an independent commission is essential. …

It is critical to the future of the Republic that the truth of Jan. 6 be told, and that the bigger picture be understood. The worst possible outcome would be widespread public amnesia, which would guarantee that history would repeat — and next time, American democracy might not survive it.

In the Washington of Walter Mondale, a President attacking the legitimacy of an American election was unthinkable. Three months after it actually happened, what is unthinkable is that Republicans would even consider repudiating the President who did it. Washington's old normal is that video of Mondale; its new normal is half of Washington being totally fine with a violent mob trying to kill the other half of Washington. Or pretending that it never took place. For those who can't explain away the events of January 6th, ignoring the insurrection in favor of culture wars and partisan posturing has already become a perfectly acceptable alternative.

There remains a glimmer of hope that an independent commission tasked with investigating the events of that January day may eventually be convened. Last week, House Speaker Nancy Pelosi told reporters that she is continuing to work with Republicans on such an effort. Pelosi has even acquiesced to Republican demands for equal representation on the commission and a share of control over subpoenas. The challenges to be resolved now involve the breadth of the commission's investigations: For all too obvious reasons, Republicans want to focus on political violence in America more generally, rather than on the events of Jan. 6.

Michael McGough addresses that notion in a recent piece for the Los Angeles Times:

But the idea that a Jan. 6 commission would look at "political violence across the country and in this city" is bizarre.

Why not throw in Benghazi, Whitewater and the John F. Kennedy assassination while we're at it? ...

It's obscene to suggest a symmetry between the Jan. 6 riots, which sought to overturn the results of a presidential election, and other acts of violence, however deplorable. Pelosi should continue to insist that a commission focus on the insurrection, and she should challenge Republicans to support that effort.

Republicans are more interested in political theater than in the truth. Because today's Republican Party is neofascist and authoritarian, its goal is to annihilate the truth across all areas of American society.

Anti-democratic and extremist organizations are eager to use established political institutions in order to legitimate and expand their power. The Republican Party is doing this across the country.

Today's Republican Party is not interested in consensus politics or good governance. Explicitly or otherwise, Republicans have become neofascist authoritarians, emboldened by Trumpism to destroy the rule of law and other norms of American democracy. Their ultimate goal is permanent victory and hegemony over Democrats, liberals, progressives, nonwhite people whoever else they deem to be "the enemy."

Today's Republican Party and larger right-wing movement are a type of political religion. In that context, dogma, lies, conspiracy theories and an embrace of magical thinking supersedes empirical reality and the truth.

Republicans do not act in good faith. They are not intellectually honest, and are no longer interested in normal politics in the form of compromise, bipartisanship or reasonable disagreement, followed by negotiation in service to the common good.

This means that any commission or other hearings into the Capitol attack and Donald Trump's coup attempt risks devolving into an opportunity for the Republicans and their agents to circulate more lies and distortions.

There is another trap which must be avoided as well. Truth and empirical reality do not exist in some imaginary median space between the claims of the Republicans on one side and the Democrats on the other. This is the type of "both-sides-ism" that encouraged the rise of American neofascism in the form of Trump and his political cult.

When truth is something triangulated as something that notionally exists between two opposing points of view, the ability to clearly distinguish truth from lies, good from evil and right from wrong is obscured.

In such a philosophical framework, fascism and other anti-human and anti-democracy ideologies will triumph — because on a fundamental level they are not committed to truth or reason. Achieving power is all that matters. Those who believe in "liberal democracy" are left to impotently scream about "truth" and "principles" while being rolled over and crushed by fascists and other authoritarians.

Truth, facts and reality exist independent of partisanship. It is a trap to believe otherwise — and not merely a rhetorical trap. David Brooks threw himself into that very trap in a recent column for the New York Times.

Brooks begins with an accurate diagnosis of how dangerous today's Republican Party has become:

Those of us who had hoped America would calm down when we no longer had Donald Trump spewing poison from the Oval Office have been sadly disabused. There are increasing signs that the Trumpian base is radicalizing. My Republican friends report vicious divisions in their churches and families. Republican politicians who don't toe the Trump line are speaking of death threats and menacing verbal attacks.

It's as if the Trump base felt some security when their man was at the top, and that's now gone. Maybe Trump was the restraining force.

What's happening can only be called a venomous panic attack. Since the election, large swaths of the Trumpian right have decided America is facing a crisis like never before and they are the small army of warriors fighting with Alamo-level desperation to ensure the survival of the country as they conceive it.

Then Brooks veers off the tracks and into a sewage drain:

With their deep pessimism, the hyperpopulist wing of the G.O.P. seems to be crashing through the floor of philosophic liberalism into an abyss of authoritarian impulsiveness. Many of these folks are no longer even operating in the political realm. The G.O.P. response to the Biden agenda has been anemic because the base doesn't care about mere legislation, just their own cultural standing.

Over the last decade or so, as illiberalism, cancel culture and all the rest have arisen within the universities and elite institutions on the left, dozens of publications and organizations have sprung up. They have drawn a sharp line between progressives who believe in liberal free speech norms, and those who don't. …

This is exactly the line-drawing that now confronts the right, which faces a more radical threat. Republicans and conservatives who believe in the liberal project need to organize and draw a bright line between themselves and the illiberals on their own side.

Brooks is suggesting a false equivalency between some imaginary bogeyman "left" and its "universities and elite institutions" with the anti-democratic forces of the Jim Crow Republican Party and neofascist Trump movement. He even deploys intentionally vague and undefined right-wing talking points about "cancel culture".

There is no substantive similarity in terms of power, resources, principles or overall ideology and vision between the bogeyman left Brooks summons up and the existential threat to American democracy and society represented by the Republican Party and the white supremacist movement. To suggest such an equivalence is to downplay the unique threat to American democracy and society we face at this historical momnt.

They believe in autocracy, not democracy, they are racist. It's just shocking what's happened to the Republican Party. … There are some House Republicans who are basically a sentient YouTube comment section. ... They have nothing to contribute, frankly, to American politics, except for incendiary and sometimes delusional public statements.

You have a Republican Party, which emotionally, essentially are neofascist. They fundamentally do not believe that another legitimate point of view exists other than theirs.

At present, the American right wing is well ahead of its opponents in terms of the weaponization of language, emotion and storytelling. To close that gap, Democrats and other good Americans must speak plainly and directly about the Republican Party as the nation and the world's most dangerous political organization. Denial and false equivalence will not save the United States from the forces unleashed and empowered by the Age of Trump. Those ingrained habits are instead more likely to guarantee the downfall of democracy.