"Guilt" writer discusses the twisty finale, the importance of that enigmatic smile and Season 2

"It's the most dramatically important moment in the entire series," writer Neil Forsyth tells Salon 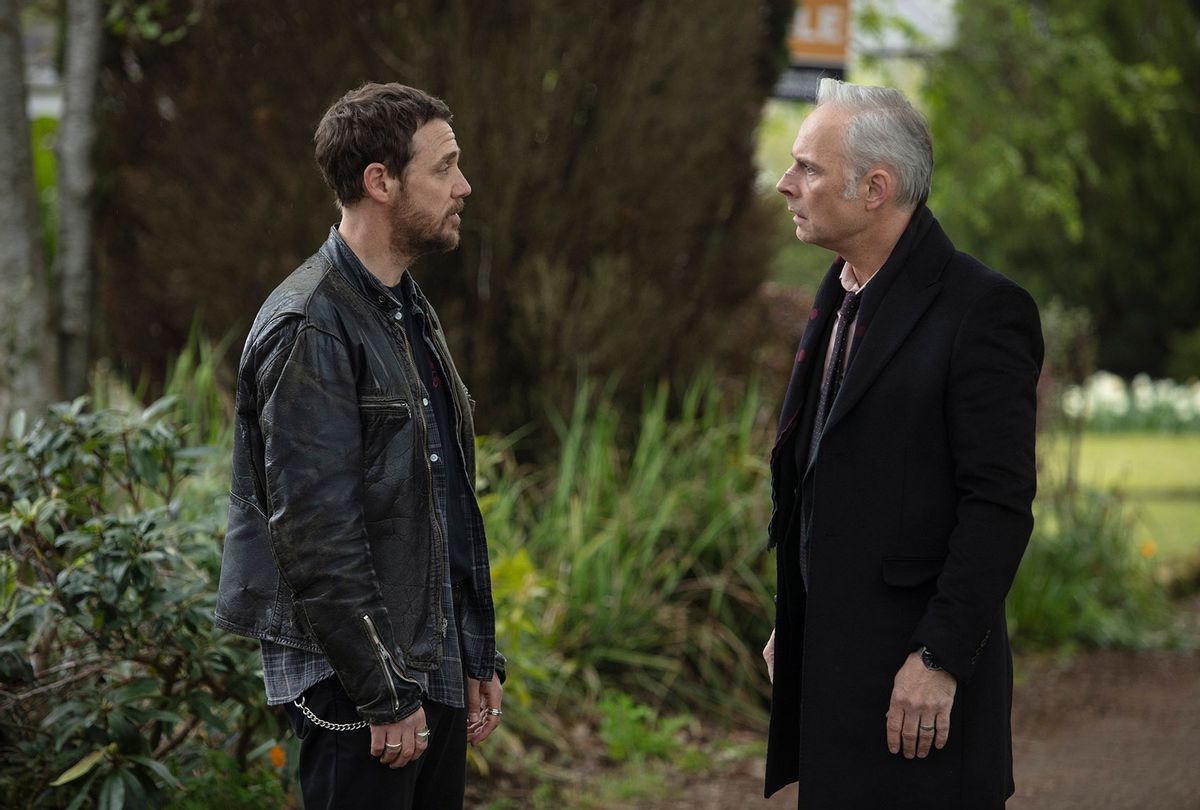 The following contains spoilers from the Season 1 finale of Guilt. If you haven't watched yet, check out Salon's preview interview with series writer Neil Forsyth.

Midway through the Season 1 finale of PBS' "Guilt," record store owner Jake McCall (Jamie Sives) refuses to let his older brother Max (Mark Bonnar) take the fall for the two of them accidentally running over and killing an elderly man.

"Of all the things Max would do, he wouldn't do that," insists Jake.

Kenny (Emun Elliott), the private investigator trying to convince Jake to turn on Max isn't so sure. After all, Kenny has worked with Max before and experienced the ambitious lawyer's cutthroat ways firsthand.

Jake, however, tries to remain loyal. The brothers' longtime estranged relationship experienced a tentative sort of reconciliation once they bonded over killing Walter Woods, the name of their hit-and-run victim.

But what began as a shared ordeal between brothers, eventually ended with them divided. Everything came to a head once Jake confessed his crime to his girlfriend Angie (Ruth Bradley), who in turn confessed to posing as Walter's niece. With their combined knowledge and a little eavesdropping, the two realize that Max does in fact plan to implicate his brother (not until he safely leaves the country, but still) when trying to blackmail Walter's neighbor Sheila (Ellie Haddington) into backing the plan.

In the end, Jake has no choice but to betray his brother first. Max had overplayed his hand, and as he's taken away by the police, he cracks a small, enigmatic smile.

The series, which originally premiered in the UK in 2019, was acclaimed as one of the best Scottish dramas in years and raked in a number of awards. It's already renewed for a second season, which will premiere this year overseas. Salon spoke with series writer Neil Forsyth about the audience's initial response.

"Honestly, it was brilliant. I've never had a reaction like that to a television show. I'm sure I never will again," he said. "I thought it would be perhaps a slightly more divisive show than it was but it seemed to just connect with people.

"I think surprise was definitely a big part of the reaction. It felt like a very different show to a lot of other BBC dramas and British drama that was perhaps on at the time. Visually, Robbie McKillop as director, and Nanu Segal the DoP and their crew did such an incredible job that it looked very different. I think, I think it felt probably much more American actually, in that kind of American dramedy tradition and in its visual presentation, the use of music, in particular, and pace."

Read the rest of the interview with Forsyth, who discusses the finale, Max's smile and what's coming for Season 2.

While the ending seems to bring Max to some sort of justice, it's a little odd for the viewer because we see so many of the others who are also guilty and involved in crimes watching him get taken in. How important was that scene to have all of these witnesses to Max's comeuppance?

I liked the idea of it dramatically, and we had to work hard so it didn't look a little stagey. It's a slightly theatrical take on it perhaps, but I thought it was really important for me to just have this murderer's row, if you like, of witnesses – all of whom had helped get to this point, all of whom had stakes in that situation. I wanted it to be as close to the end as possible, you not only didn't know how it was going to end, you didn't know who the real victim in the story was going to be. And there was people there who all had a bit of a case to be made, that they should face some form of comeuppance in some nature in the end. 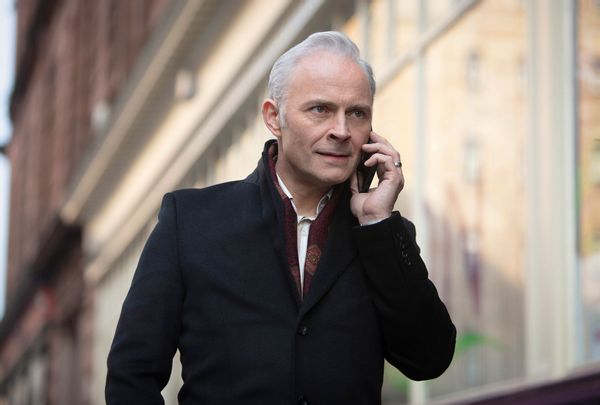 When he's being driven away, Max smiles a little. As viewers, are we supposed to know what he's smiling about?

The smile in the car, I had to fight for that creatively within the team, which I was happy to do so because it was for me, it's what the whole show is, that moment. When the show came out here [in Scotland and the UK] lots of people had their own theories. My motivation with that was, it was about the brothers, and it was about their lives. And it was about Max facing the reality that Jake, his younger brother, who he had seen with a certain level of disdain his whole life has finally put one over him and done so in this incredibly seismic and life-changing way. And that smile for me is one of admiration, from Max to Jake, and by extension, one of love. That's I think it's the most dramatically important moment in the entire series. And I'm so glad to have it there in, so glad in the performance, which I think was absolutely perfect.

Each of the supporting characters pulls off some sort of crime or deception, but I want to discuss Kenny. Poor Kenny! First there's the alcoholism, his wife kicking him out, getting beat up. He's pretty sad, but then he also shows himself to be corruptible. What went into developing that character?

It was just meeting a character at rock bottom and watching them flounder their way slowly out of it really, while dealing with the events that the show and the story were throwing at them I thought was really attractive. He feels probably quite comedic early on, and then I think it's just pulling the rug out from below the viewers' feet a little bit in presenting characters in relatively simplistic terms and then complicating who they are and the viewers' perception of them.

So Emun Elliot, such a brilliant actor. He got that in his performance and the journey really well. He comes in and he's funny and he's beat down and he's he's a man in trouble. And then we start to find these little hoops of performance where clarity is coming and the clouds are parting and we see a man slowly start to piece himself together while dealing with this unbelievably stressful situation.

The ease by which many of the characters lie or deceive about serious matters, not just harmless white lies, is astounding. But should we really be shocked by this or cynical about it in real life?

Well, I think there always has to be – as long as you have a rock solid foundation behind the character's decision to lie, then you're fine. . . . Moral judgment I've got absolutely no interest in. I think when you start taking a firm moral standpoint, as a writer and trying to infiltrate that into the work, it becomes pious and boring and selfish. As a writer, that's your job is to create morally interesting situations rather than handing the viewer this bit of moral lesson.

You've written quite a bit of humorous and human interest things, but also lots of crime. What's the appeal with crime dramas for you?

I bounced about, really. I wrote two novels, in my earlier career, which were probably not broadly dissimilar to "Guilt" in terms of their crime elements, and it was people being thrown into extreme situations. My journalism when I was younger, I was always drawn to interesting stories and people that had made decisions that sound unexpected and threatening paths. My first book was about a young Scottish fraudster . . . so it was broadly in that area.

It was comedy that took me into television because I was asked to adapt humor books that I'd written. The wall between comedy and drama in British television, historically was quite clear, really. And that's actually changing a lot over the last few years I think because of the influence of American television, practices and influence of streamers, where you get commissioning teams that commission from quality genres. So I always try to get some element of dramatic interest into my comedy shows. But then I am really enjoying flipping that and having shows that are dramatically driven with an element of humor in there. I think it feels like my sweet spot what I'm writing now where it's shows that are driven by kind of muscular, dramatic frameworks, but within the characters, you know, they're allowed to be funny when the situation allows it.

In writing this season finale, did you know that you'd have a second season yet? Either way, how did it affect how much you wanted this to feel like a complete ending, where it could be one and done?

I tried to strike a balance with the ending of making it narratively satisfying while leaving a little bit of an exit to create a whole new story. We knew we'd have to wait till see how it went down, being unusual. And I think with the reaction that it had within a few days, I was taken out for lunch by the BBC. It was really clear that things were looking good for a for a second series. I pitched my kind of smoke and mirrors pitch, pretending I had a series-length story. And I thought, "Well, if I can just stretch this out to get over the main course then that we can pretend they know what's gonna happen."

But also what was gratifying was it was a real word-of-mouth hit here. They didn't drop all the episodes at once on iPlayer which is unusual now, and so people had to wait week to week for the next episode. And I think that really helped kind of built up this slight head of steam.

For Americans, Season 1 just ended, but Season 2 is about to premiere over there. Can you tease a little bit of where we're going to pick up? I saw something where it looked like Max had spent some time in jail.

Well, I think the biggest thing is as hopefully is always the case, nothing is what it seems. So yes, Max has been in jail. But let's see what that means within this sphere of "Guilt."

This is a story about siblings, so what happens to that relationship when one sends another to jail?

There's certainly got a bit to get over. It's another significant obstacle for them to clamber over when asked to do so by evolving situations.

What's next for you?

I've got a show, it just got announced this week in the UK, which is called "The Gold." It's a BBC and Viacom drama series inspired by the true story of a robbery here in the UK in 1983 called the Brink's-Mat robbery. I've nearly finished writing it, and we're going to be filming that next year.

I think the interesting thing about the Brink's-Mat story is that it changed British crime forever and it changed British policing forever and encapsulated a period of the 1980s where traditional structures were being challenged and wilting as a result. It was a fascinating crime within a fascinating period. And where that story goes is really incredible. It's a kind of a great British story hiding in plain sight, really.