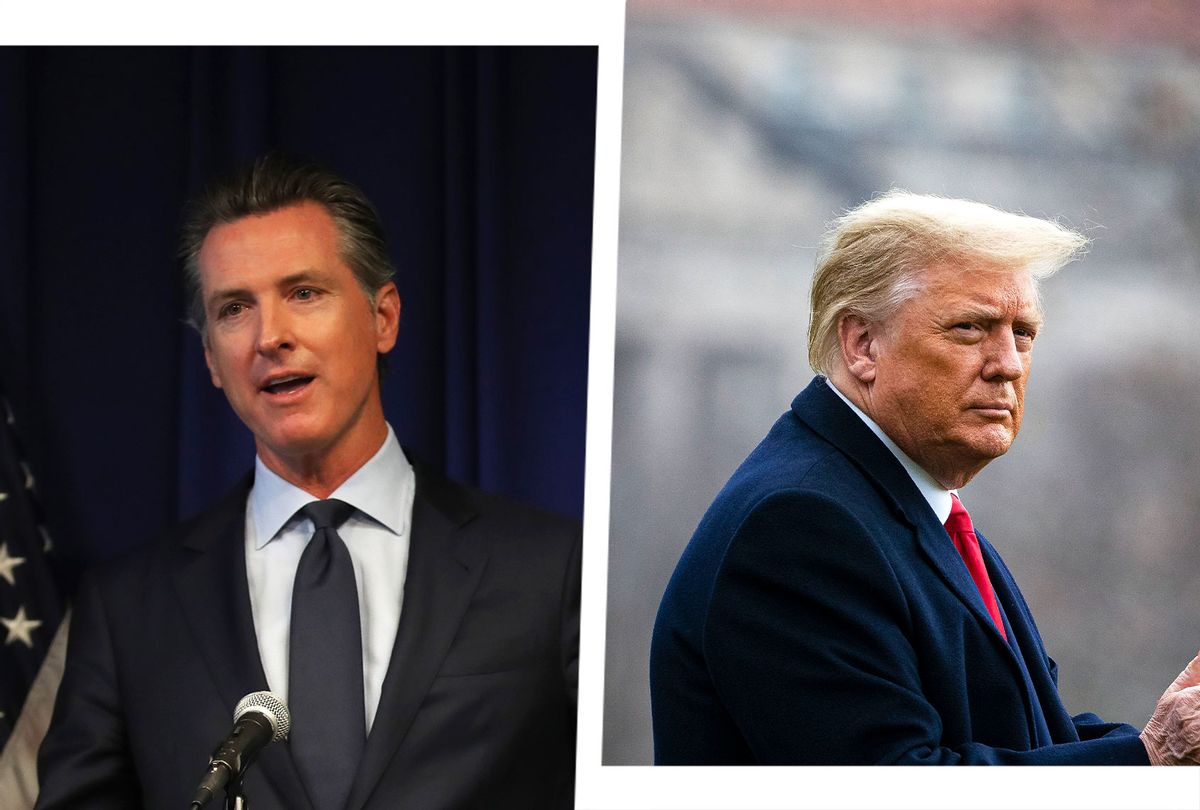 The absurd recall election to replace California's Democratic governor, Gavin Newsom, is upon us. All registered voters in California were sent mail-in ballots weeks ago and Tuesday is the last day for people to either turn them in or vote in person. So far, turnout has been much better than anyone expected for this weirdly timed special election. That bodes well for Governor Newsom in a state in which Democrats outnumber Republicans 2-1. As of last week, 56% of returned ballots were from registered Democrats and about a quarter from registered Republicans. And it does not appear that many of those ballots came from disgruntled Democrats.

The last Los Angeles Times poll found  60.1% of likely voters surveyed oppose recalling Newsom compared with 38.5% in favor. That's ten points higher than the same poll had the "No" vote in July and close to his 62% - 38% victory in 2018. Most other polls are in the same ballpark, showing Newsom getting well above 50%, which is what it will take for him to survive. It's certainly possible that the Republicans could still pull this off with a massive surge of same-day voting that includes many unhappy Independents and angry Democrats who are not being caught in the polling, but it will be a tough lift.

The big question is: What turned this around for Newsom?

After a very complacent spring in which Democrats (including yours truly) assumed the recall wasn't going anywhere, the polling started to look scary during the summer. The analysis at the time was that Democrats just weren't engaged while the Republicans were champing at the bit to oust a Democratic governor in a big blue state. So Newsom and the party put together a major operation with a massive ad buy. (This is, unfortunately, necessary in California which has a very media-dependent political culture.)

Newsom's team started off with positive ads during the summer, highlighting the positive results of the Governor's pandemic policy including one-time cash payments of  $1,100 he proposed in his budget. But as his numbers began to sink, they relied much more heavily on negative ads, ramping up to a full-court press against GOP pandemic policies in the final month. They denounced radio talk show host Larry Elder, the Republican "front-runner" to replace him, informing people about his far-right, extremist views. But they also went after the Republicans generally, including Florida Governor Ron DeSantis and Texas Governor Greg Abbot, along with the big kahuna, Donald Trump. The Newsom campaign raised the specter of Republican governance in dark and threatening terms.

The Atlantic's Ron Brownstein points to an explicit emphasis on the pandemic response as being the key to Newsom's improved chances of survival. He quotes Oscar Lopez, the political director of the 700,000 member SEIU, who says that organizers in the field are finding that voters are most responsive to messaging that highlights the GOP candidate pledges to band mask mandates and repeal vaccine requirements for teachers and school staff. Brownstein reports that concern is reflected in the polling:

A late-August survey by the nonpartisan Public Policy Institute of California tested an idea that goes beyond even the mandates Newsom has imposed so far: requiring proof of vaccination to enter "large outdoor gatherings" or "restaurants, bars, and gyms." Almost exactly three-fourths of state residents who have taken shots (including more than two-fifths of the vaccinated Republicans) supported such a mandate, according to detailed results PPIC provided to The Atlantic. More than 90 percent of Californians who have not been vaccinated opposed such requirements. But because more than four-fifths of all adults in California have received at least one shot, that division translated into a solid 62 percent overall majority support for such a "vaccine passport" mandate.

If Californians are paying attention, they will have seen many Republican governors' immediate hysterical reaction over President Biden's executive orders last week requiring companies over 100 to require employees to either get vaccinated or get tested once a week. It's reasonable to assume that will only reinforce their intention to vote no on the recall if they haven't already done so. The partisan divide on the pandemic response is stark.

Brownstein makes the case that Newsom's strategy may be a template for some of the other off-year elections. The polling in the 2021 Virginia and New Jersey Governor's races shows a similar response to Republican resistance to COVID mitigation strategies. The connecting of Republican candidates to Trump and other national Republicans who are hostile to the vaccines might just carry on into the 2022 cycle.

In fact, this points to a larger strategy that one hopes Democratic candidates will see and emulate going forward. While it is vitally important to educate voters about accomplishments and a positive agenda if it hasn't been obvious before it should be crystal clear now that we are in a period of such severe polarization that everything depends upon getting base voters and Democratic-leaning Independents to turn out. And that requires highlighting the very real threat of a Republican takeover.

In the past, the president's party tended to go to sleep and forget to vote in the midterms but there is no room for such complacency anymore. Republicans are so far gone that they are coddling extremist insurrectionists and allowing thousands of people to die needlessly by catering to the minority's refusal to do what's necessary. They must do what Newsom is doing: Eschew happy talk and instead engage in the political fight.

It would have been more difficult if the Republicans had put Donald Trump behind them. But he is still the undisputed leader of the GOP and will no doubt be campaigning and riling up the MAGA base all over the country next year. But he and the Republicans won't be able to count upon those suburban voters who tend to vote in midterms because they despise Trump and are petrified of the DeSantis/Abbott wing of the Republican party who have treated the pandemic as a lethal partisan weapon. It's going to be very hard for Republicans to win without them.

Democrats must remind them and the rest of their base exactly what's at stake and they must ignore the political establishment and the media which will demand that they deliver a "positive" message insisting that negative campaigning turns people off. For better or worse, this is an era of negative partisanship in which fear and loathing of the other party is the prime motivation for political involvement. Ignoring that reality is dangerous political malpractice.