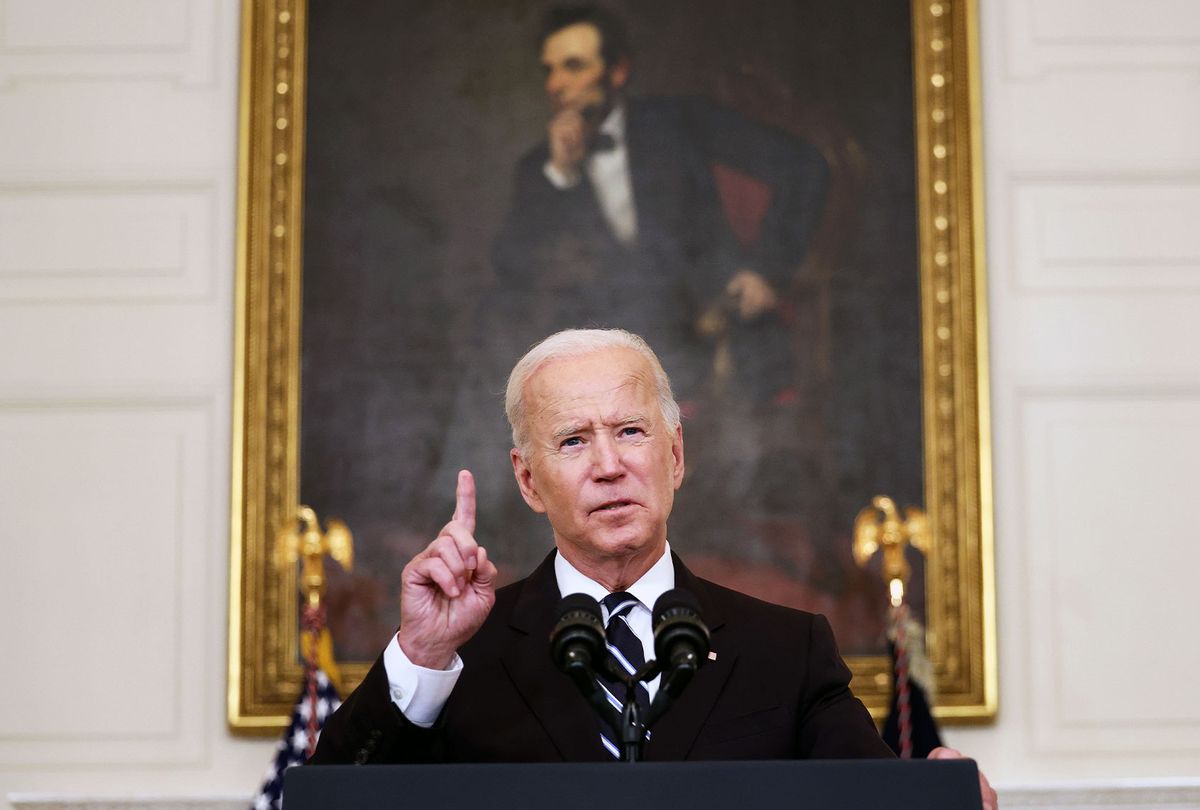 U.S. President Joe Biden speaks about combatting the coronavirus pandemic in the State Dining Room of the White House on September 9, 2021 in Washington, DC. As the Delta variant continues to spread around the United States, Biden outlined his administration's six point plan, including a requirement that all federal workers be vaccinated against Covid-19. Biden is also instructing the Department of Labor to draft a rule mandating that all businesses with 100 or more employees require their workers to get vaccinated or face weekly testing. (Kevin Dietsch/Getty Images)
--

Conservative politicians and pundits are fuming over President Biden's new plan to impose sweeping vaccine mandates, calling him a "tyrant" and an "authoritarian."

The plan, announced during a White House speech on Thursday, features a vaccine mandate for all federal workers and new contractors, as well as a requirement that companies with over 100 employees get their workers either vaccinated or tested on a weekly basis, a major offramp to be sure.

"My job as president is to protect all Americans," the president said. "So tonight, I'm announcing that the Department of Labor is developing an emergency rule to require all employers with 100 or more employees that together employ over 80 million workers to ensure their workforces are fully vaccinated or show a negative test at least once a week."

"Some of the biggest companies are already requiring this," he pointed out. "United Airlines. Disney. Tyson's Food. And even Fox News."

Unsurprisingly, Republicans were quick to call the mandate a massive overreach, suggesting that Biden is attempting to enact an authoritarian regime.

Shortly after the president spoke, Fox News ran multiple banners reading "BIDEN IS AN AUTHORITARIAN" and "BIDEN DECLARES WAR ON MILLIONS OF AMERICANS." Right-wing publications like Breitbart and The Federalist ran stories that described Biden's mandates as "FULL TOTALITARIAN" and a "fascist move," according to CNN Business.

A handful of current and potential conservative legislators also came forward to air out their grievances.

"The right path is built upon explaining, educating, and *building* trust, including explaining the risks/benefits/pros/cons in an honest way so a person can make their own decision," he tweeted. "The Biden Administration has completely failed in that regard."

Author of "Hillbilly Elegy" and Ohio Senate candidate J.D. Vance told his followers: "Don't comply. If all of us ignore this garbage they won't be able to enforce it."

A number of conservatives also critiqued Biden's move on constitutional merits, suggesting they may challenge the mandates in court.

"​​From ignoring property rights, to shirking his duty at the border, and now, coercing private citizens to undergo a medical procedure, Joe Biden has shown a wanton disregard for the U.S. Constitution," said Sen. Mike Lee, R-Utah. "As a would-be autocrat, Biden endangers the very fibers of this great nation. Freedom and agency are the hallmarks of the American experiment."

"The decision to get vaccinated lies between you and your doctor - NOT the federal government," he added. "We must fight back against medical tyranny that dangerously violates Americans' individual freedoms."

"I will be introducing legislation to block this egregious assault on Americans' freedom and liberty," echoed Rep. Andy Briggs. "We must fight against these attempts to force vaccine mandates on the American people."

During his speech, the president blamed the recent surge in COVID-19 cases on "pandemic politics," arguing Americans were not getting vaccinated for political reasons. He also announced plans to bolster the FDA's vaccine for children under twelve and allot funding for a booster shot.