The Satanists are right: Texas' abortion ban is a direct attack on freedom of religion 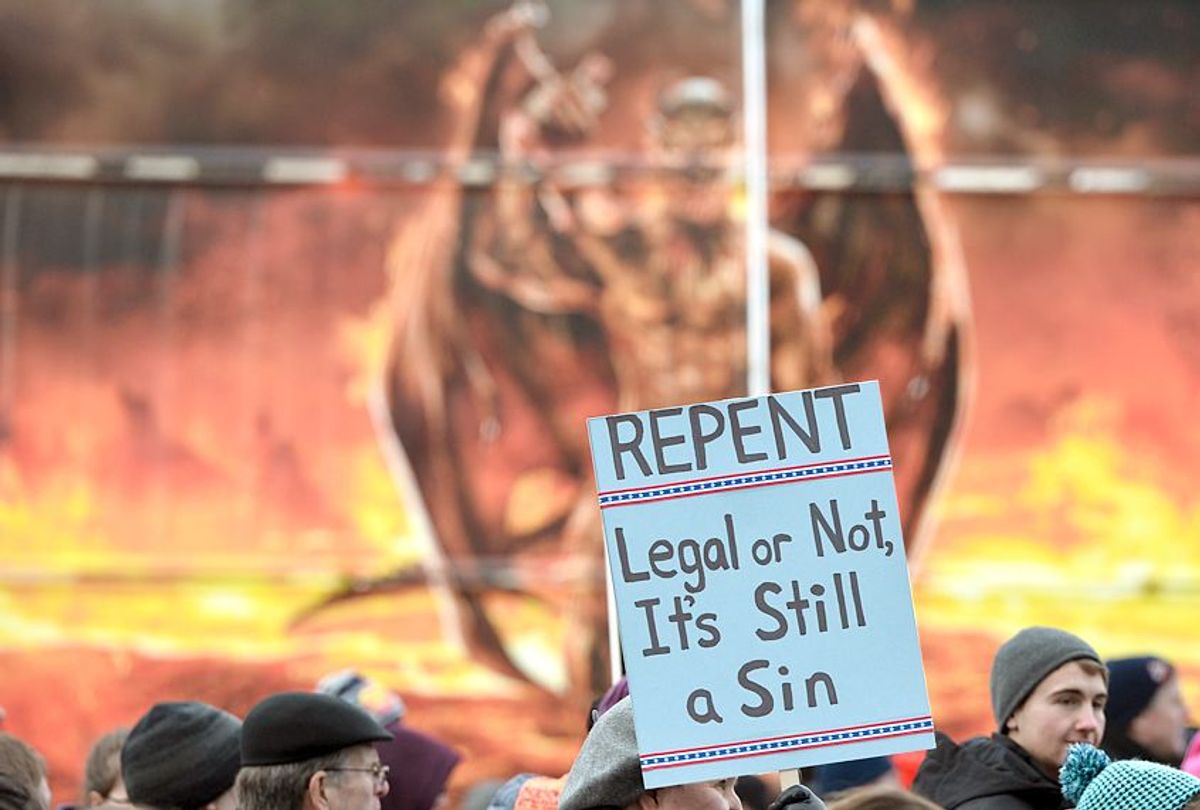 Trolling is largely associated with humor-impaired right-wing bullies, but there are still some on the left who know how to troll with wit and style while serving the forces of good instead of evil.

Take, for instance, the Satanic Temple of Salem, Massachusetts,  a perennial thorn in the side of Christian fundamentalists who try to pass off their theocratic impulses as "religious freedom." The Temple, which is a pro-secular organization and does not literally worship Satan, routinely pulls stunts like suing states that display Christian imagery on public grounds to make them also display Satanic imagery. The group also stands for reproductive rights, and as Brett Bachman reports for Salon, is fighting the Texas abortion ban by declaring that abortion is one of their sacred rituals, making the ban a major imposition on their free expression of religion.

The Satanists' trolling worked. The move triggered all the right people, by which I mean misogynist prigs who have way too much interest in other people's sex lives.

Texas Republican Rep. Dan Crenshaw's tweet was an immediate contender for the Self-Aware Wolves hall of fame. It's the Satanists — whose mission is "to encourage benevolence and empathy among all people, reject tyrannical authority, advocate practical common sense, oppose injustice, and undertake noble pursuits" — and not Crenshaw who are clearly on the right side of history and human rights.

But this move by the Satanic Temple serves a higher purpose than trolling forced-birth advocates like Crenshaw. The Satanists are highlighting an issue that often gets lost in the debate over reproductive rights: The anti-choice movement is just one part of a larger effort by Christian fundamentalists to covertly turn the U.S. into a more theocratic state.

Anti-choice politics are driven by a small and shrinking group of hard-right white evangelicals who wish to foist their religious views on the majority, in violation of the First Amendment-enshrined value of free exercise of religion. The Texas abortion ban is tied to a larger agenda to undermine LGBTQ rights, replace science with religious dogma, and otherwise violate the constitutional prohibition of the establishment of religion.

Conservatives go to great lengths to hide how much being anti-abortion is about forcing all Americans to live by the religious tenets of the white evangelical minority. Indeed, Republicans will often try to pretend "science" is motivating abortion bans, as former New Jersey governor Chris Christie did over the weekend on ABC, when he declared, "One of the reasons you're seeing a decline in abortion is an increase in science and how much more people know about viability." He then went on to baselessly claim that people are "much more appalled by the act of abortion than they were back in 1973."

As with pretty much everything that's said in defense of abortion bans, Christie spouts lies all the way down.

Support for abortion rights has remained steady since 1973 and strong majorities want Roe v. Wade to stay put. In 1973, scientists understood perfectly well how embryonic development worked and that understanding hasn't meaningfully changed since then. Embryos are not "viable" two weeks after a missed period, which is when the Texas abortion ban kicks in. Indeed, the pretense for banning abortions so early — the "fetal heartbeat" — is also a lie. As actual medical scientists and doctors told NPR, there is neither a fetus nor a heart that early in pregnancy, but more "a grouping of cells that are initiating some electrical activity" that GOP legislators misleading call a "heartbeat."

Unfortunately, these kinds of lies about "science" are common among anti-choicers. As scientists Nicole M. Baran, Gretchen Goldman, and Jane Zelikova wrote in Scientific-American in 2019, GOP legislators "actively misrepresent the work of scientists, using rhetoric to deceive the public and stoke emotional outrage," and the ideas animating abortion bans "are appallingly unscientific, and they are dangerous."

We've all been accustomed to the cynical ease with which Republicans lie, but the anti-choice lies about "science" are ridiculous even by the basement-level standards conservatives live by. These are the same folks who reject the very real science of climate change and COVID-19 vaccination, even though their anti-science views are leading to mass death and destruction. (And then they lie and claim to be "pro-life.") And it's all to serve theocratic forces who really got this anti-science ball rolling by trying to force schools to teach Christian creation myths in lieu of evolutionary biology.

It's not science that fuels this assault on abortion rights, it's religion — specifically the religion of white Christian fundamentalists.

A 2020 Associated Press-NORC Center for Public Affairs Research poll shows that 67% of white evangelicals want to ban abortion, compared to only 37% of Americans overall. Even the majority of Catholics support legal abortion, despite decades of church opposition to reproductive rights. A similar 2020 poll from Pew Research shows the same results. Strong majorities of Black Protestants, white non-evangelical Protestants, Catholics and the religiously unaffiliated all support Roe v. Wade. The only group where a majority opposes abortion rights is white evangelicals.

The anti-abortion movement cannot be meaningfully separated from this theocratic movement of white evangelicals, or, for that matter, from white supremacy. It's all one big bundle of intertwined ideas, and all the same people pushing it. These are folks resolutely opposed to a multiracial democracy, and instead have a vision of the U.S. as a white supremacist state where their far-right religious views shape the laws that everyone has to live by.  And despite the fact that Ten Commandments explicitly forbid bearing false witness, these theocrats lie and lie and lie — about science, about the law, about their intentions — because they know full well that their mission is anti-democratic and violates the constitutional precepts about freedom of religion.

Abortion rights are often marginalized as a "woman's issue" in American political discourse. That's offensive in itself, as women are more than half the population and access to reproductive health care affects the lives of everyone, not just women. But truly, this Texas abortion ban goes beyond even these material questions about health care access. It cuts right to the heart of the struggle defining our era, between a secular, pro-democracy majority and an authoritarian minority who wants to force its racist, theocratic view of America on the rest of us.

The Satanists get it. No amount of right-wing lying about "science" will change the fact that this abortion ban is a direct attack on freedom of religion.