Republicans don't care if Roe is popular. And thanks to Joe Manchin and Kyrsten Sinema, voters can't make them 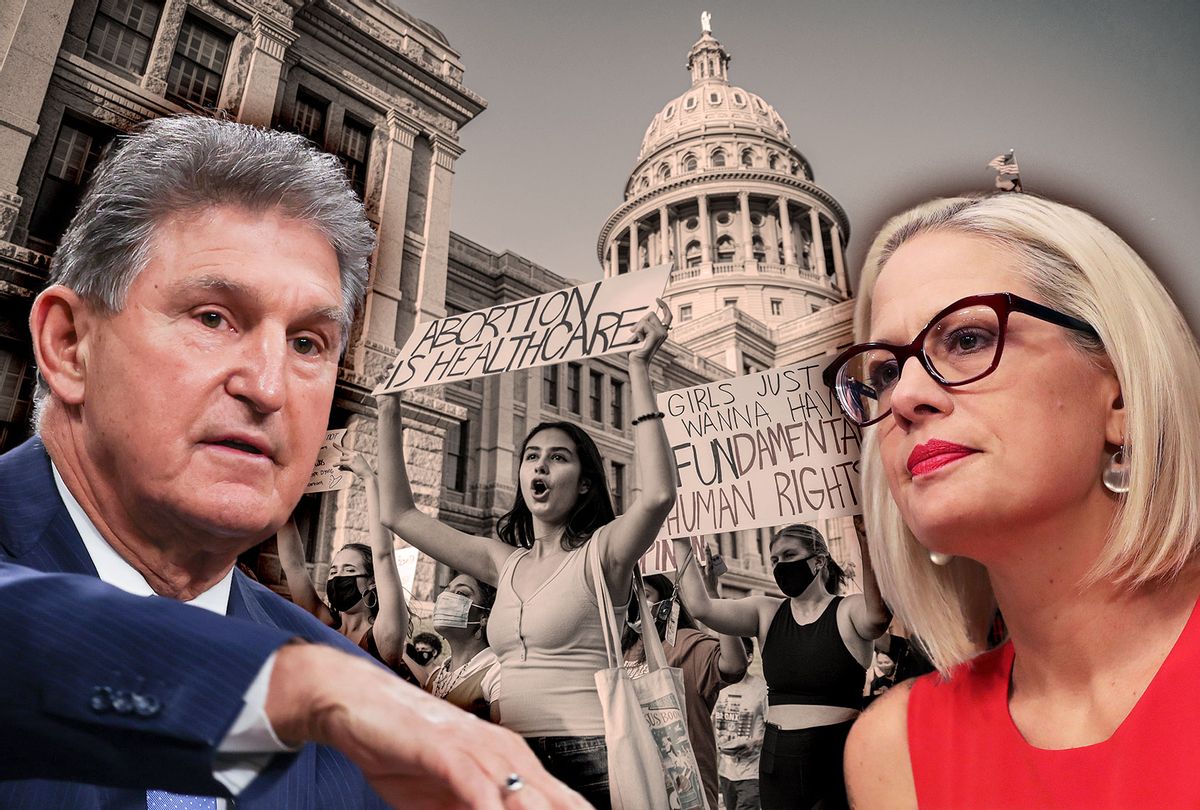 This week, the Supreme Court functionally overturned Roe v. Wade, rolling out the red carpet for every GOP-controlled state in the country to pass similarly dystopian laws that rely on self-appointed misogynistic bounty hunters to police women's bodies. Tellingly, they did it in the most cowardly fashion possible, by using the "shadow docket" to issue an unsigned ruling in the dead of night. As Justice Elena Kagan wrote in her very-much-signed dissent, the court's decision was "unreasoned, inconsistent, and impossible to defend."

The lily-livered nature of the Roe overturn suggests that the conservative justices know full well that abortion rights are broadly popular with everyone who isn't a bug-eyed, Bible-thumping lady hater. A 2019 Perry Undem poll showed 73% of Americans do not want Roe overturned, which fits into a larger trend of growing support for reproductive rights. As Dan Pfeiffer notes in his Message Box newsletter, abortion rights are especially popular with the "influx of college-educated voters to suburban areas" that are "one of the main factors making Texas a battleground state."

Republicans understand that being openly anti-abortion is bad politics. That's why both Amy Coney Barrett and Brett Kavanaugh pretended, during their confirmation hearings, that they had no intention of overturning Roe — and why shifty Republican politicians like Sen. Susan Collins of Maine pretended to believe them. And it's why GOP pundits have resorted to gaslighting the public about this decision.

On Meet the Press, RIch Lowry claims that Roe hasn't been overturned and this was just a procedural decision "This was a procedural ruling that clearly was the correct one. There was no harm here yet." pic.twitter.com/lgZUPLnuFB

The "it's not technically a Roe overturn" lament is flatly contradicted by the multitudes of patients who had abortions scheduled this week and were just told they can't have them because the procedure is banned in Texas.

As Roy Edroso wrote on his Substack, "today's conservatives are loud and proud about nearly all of their insane and vicious beliefs," but on the Roe overturn, "they're staying so quiet about it — and, to the extent they acknowledge that it's happening, trying to make it look like something else." Fox News largely ignored the court order, and when Tucker Carlson finally talked about it, he lied, denying that it's a "radical" imposition on women's rights.

Republicans don't like talking about their unpopular views on reproductive rights. But the party leaders also did nothing to stop Texas from implementing this radical abortion ban. On the contrary, the party has done everything in its power to make this happen, from stacking the courts with right wing ideologues who don't care about law or precedent, to backing the theocratic politicians who are passing these laws. Republicans aren't worried about a voter backlash in 2022 or 2024. They believe that they've successfully engineered it so that the will of the voters doesn't matter anymore.

And they're right to believe it, because they are being helped by two Democratic senators who, either out of stubborn ignorance or trollish spite, are the best possible friends Republicans could have in their quest to wind down democracy: Joe Manchin of West Virginia and Kyrsten Sinema of Arizona. Whatever their motivations, both senators have refused to vote to end or even reform the archaic and anti-democratic Senate filibuster. And with the Senate as closely divided as it is, unless those two holdouts change their minds, almost no Democratic legislation can get past Republican obstruction.

That the filibuster is the problem is obvious in the most immediate sense.

Speaker of the House Nancy Pelosi has already promised a vote this month — which will pass — on the Women's Health Protection Act. The bill would fulfill President Joe Biden's promise to sign a law to codify Roe v. Wade and make the Texas law illegal. But Republicans in the Senate will simply use the filibuster to keep that bill from ever getting a debate, much less a vote, on the Senate floor.

But really, the problem is much broader than that, because Senate Republicans are using the filibuster to block necessary voting protections and democracy reforms. Unless Manchin and Sinema wise up really fast, and allow bills like the For the People Act and the John Lewis Voting Rights Act to pass, Republicans on the state level will be able to use tactics like gerrymandering, voter suppression, and outright election tampering to make sure that the will of the American majority has no impact on who is actually holding power in this country.

Texas has been trending bluer in recent years, but Republicans in that state have already found their fix for the "problem" of voters being able to choose their leaders. On the same day that the state's abortion ban kicked into action, the Texas state legislature passed a draconian anti-voting law that targets urban voters, especially voters of color, making it much harder to cast a ballot. The Democrats in the Texas legislature put up a hell of a fight, even fleeing for weeks to deny Republicans quorum, but ultimately their message was aimed at Manchin and Sinema: We need an end to the filibuster, so that voting rights can be protected. Manchin took a meeting with the Texas group, but continued to defend the filibuster, before jetting off to a fundraiser hosted by GOP-linked energy interests.

Republicans believe, with good reason, America is easing into a post-democracy state, where the will of the majority will be overruled by a right wing minority that has successfully destroyed any avenue of democratic accountability. First, they captured the federal courts. Now the Supreme Court is using the "shadow docket" to pass a far-right agenda — including this abortion ban — without answering to the public at all. And while Democrats technically control the federal government right now, with the help of Sinema and Manchin, that will soon be over. Republicans will be able to manipulate elections so they "win" the White House and Congress without actually persuading a majority to vote for them.

This abortion ban is the first taste of what life under the GOP's permanent minority rule will be like. It's a reminder that the people who stand to gain the most are fundamentalist Christians who are rapidly declining in number, but nonetheless feel entitled to force their patriarchal, bigoted, joyless worldview on the rest of the country. Secularism and freedom of religion are directly in their rifle sights. Banning abortion, which is absolutely about forcing a theocratic view of reproductive rights on the public, is likely just the first move. LGBTQ rights, birth control, and other secular freedoms we've come to enjoy are also on the chopping block, once democratic accountability stops being an obstacle for the right. And, as this abortion ban shows, fundamentalists are so close they can taste it. And all because Democratic dum-dums like Manchin and Sinema are going to stand by and let the right steal our democracy.