In this recipe, Greek yogurt works double-duty — both as a marinade and a salad dressing 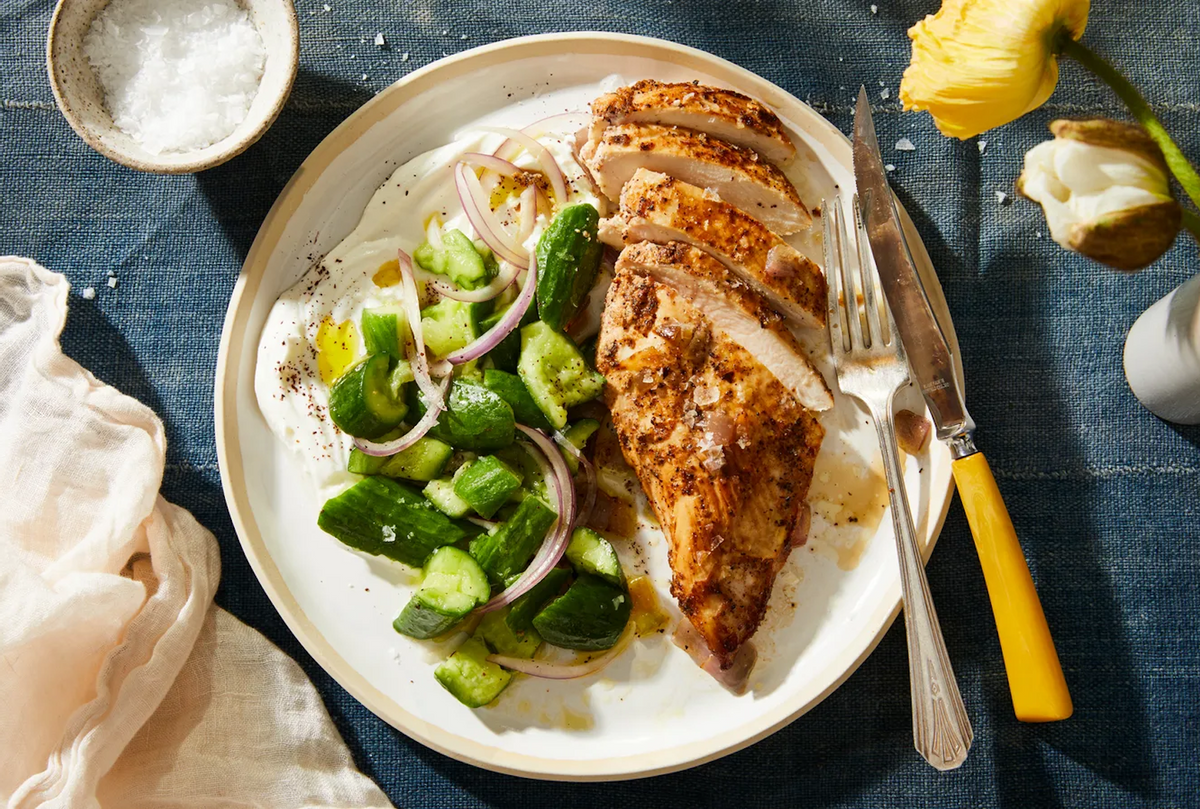 Big Little Recipe has the smallest-possible ingredient list and big everything else: flavor, creativity, wow factor. Psst — we don't count water, salt, black pepper, and certain fats (specifically, 1/2 cup or less of olive oil, vegetable oil, and butter), since we're guessing you have those covered. Today, we're getting the most out of a fridge staple.

Greek yogurt is one of the hardest working ingredients in my fridge — the sort of staple that can bounce between sweet and savory recipes without blinking an eye. Top with granola for breakfast or mix into chocolate mousse for dessert. Or put it toward dinner: pasta, or potato salad, or a dunking sauce for chicken.

In this recipe, Greek yogurt works double-duty — both as a marinade and a salad dressing.

If you've ever marinated meat before, you already know that you need a few components in addition to salt — something fatty (like olive oil) for better browning, something acidic (like vinegar) to tenderize, and something flavorful (like a spice or herb) for seasoning. Effortlessly, Greek yogurt accomplishes two out of three, thanks to its milk fat and live cultures.

So it's easy to see why this technique has been around for centuries: "It was a common practice during the Mongol Empire, which spanned the 13th and 14th centuries, to ferment mare's milk (that would be from the horse) into yogurt and use this to marinate meat," writes Priya Krishna in her yogurt column for Taste.

While chicken breasts are infamous for drying out, yogurt's lactic acid boosts their cooking confidence, yielding meat that's tender and juicy enough to compete with thighs. You'll salt the marinade more than you'd think is necessary — the yogurt will taste too salty on its own, but modest chicken appreciates this, just like it would a brine.

Marinate for at least one hour, or up to 12. (Any longer in the fridge, and the meat will turn mealy.) If you're a planner, scale up the recipe and freeze portions of chicken right in its marinade — a smart trick I learned from cookbook author Nik Sharma.

Besides the yogurt and salt, the marinade only needs one other ingredient: ground sumac. With a purplish color and lemony flavor, sumac is a staple spice in Middle Eastern cuisines. In Bottom of the Pot (a Piglet winner!), Naz Deravian writes: "Sumac also symbolizes the color of sunrise—a new day." Which sounds wonderful right about now, doesn't it?

If you don't have sumac and are sheltering in place, let your spice cabinet lead the way. Try black pepper, cumin, caraway, garam masala, chili powder, whatever makes you go, "Ooh!" And add enough to be able to really taste it.

But maybe you're wondering about the second way we're using yogurt? Often, cucumbers get tossed with sour cream or créme fraîche or Greek yogurt as a dressing. Here, you're going to salt smashed cucumbers and some slivered red onion until they both weep, then sob — then we'll spoon them and their juices onto a downy yogurt blanket. Separating the dressing from the salad may seem strange, at first, but this way each ingredient is heard more clearly.

The rest of that red onion gets thrown in the skillet with the chicken. So, yes, we have yogurt two ways. And red onion two ways. And even sumac two ways (after the marinade, you'll sprinkle more on the salad). And salt more ways than that. Because if the ingredient is around already, why not use up every last drop?

Balsamic chicken can mean a lot of things, and many of them involve a lot of ingredients. Not this recipe. All you need is chicken, butter, balsamic, and salt. The trick is to use the balsamic not one, not two, but three different ways.

For those nights when you don't think you have time to make dinner: You do! The supporting ingredients are happy to be futzed with. Try mozzarella or labneh instead of burrata, basil or dill instead of mint. And let me know your favorite combo in the comments.

Meatballs without eggs, herbs, spices, even bread crumbs. Instead? Fluffy quinoa teams up with ground chicken for a few-ingredient winner-winner. And by ground, I mean pulsed in a food processor. This allows you to start with dark meat which means way, way more flavor.

Inspired by the chicken chilis my mom made when I was a kid, in this version, sweet yellow onions and spicy poblanos do most of the heavy lifting. Like Marcella Hazan's famous sauce, butter enriches the tomato-y broth, mimicking the richness of beef or pork. Highly recommended with also-buttered cornbread.