As we remember 9/11, we too easily forget victims of the gruesome drone war

The drone attack we were told was a "righteous strike" killed seven children. Tragically, that's nothing new 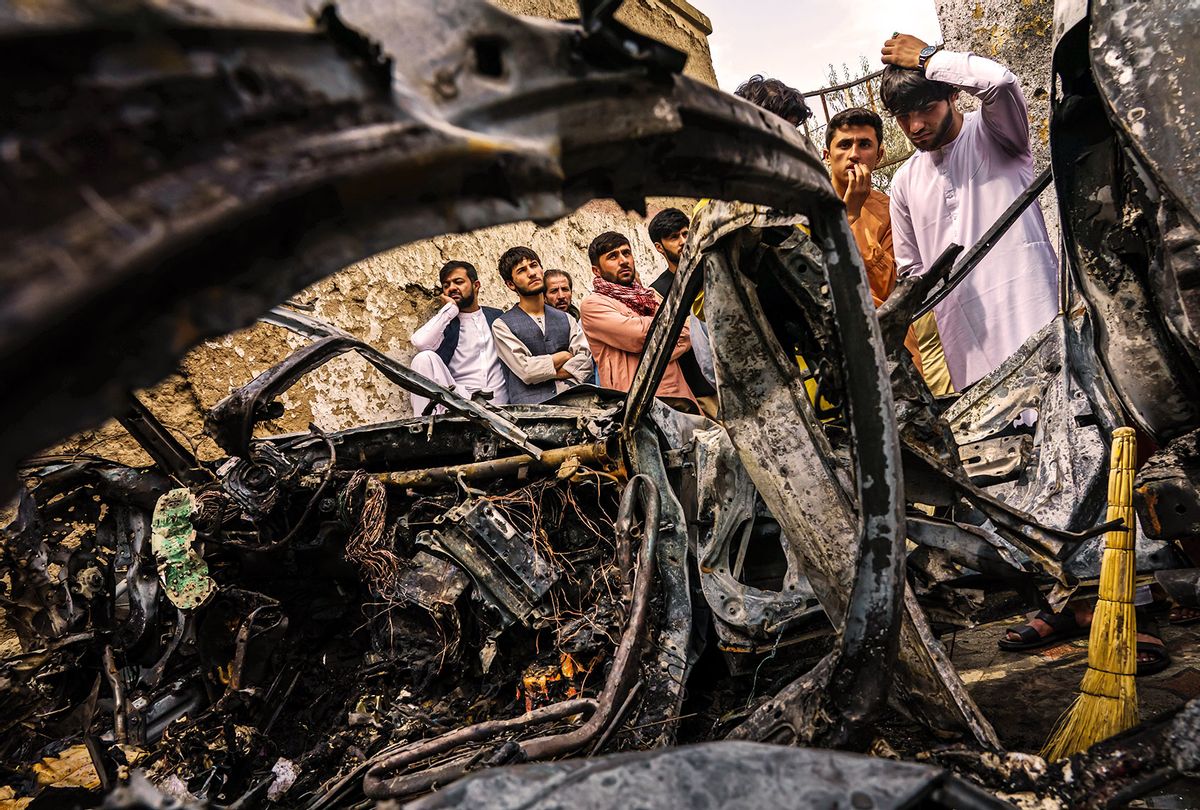 Relatives and neighbors of the Ahmadi family gathered around the incinerated husk of a vehicle targeted and hit earlier Sunday afternoon by an American drone strike, in Kabul, Afghanistan, Monday, Aug. 30, 2021. (Getty Images/MARCUS YAM/LOS ANGELES TIMES)
--

As the mainstream press spent this past weekend once again ensuring that Americans never forget the fear and anger of 9/11, which prompted 20 years of war, 10 of the latest victims of 9/11 were being wiped from historical memory. Just two weeks before the 20th anniversary of 9/11, a U.S. drone killed the Ahmadi family, including seven children. In the America-centric writing of history, they have already been forgotten.

The U.S. military apparently surveilled 43-year-old Zemari Ahmadi throughout his final day. He went about his normal routine as a Kabul-based employee of the aid group Nutrition and Education International. Ahmadi dropped off his co-workers at various locations throughout Kabul, filled water cartons at his office, and drove home to a residential compound where he lived with his family and his brother's family. As his own children and his brother's children ran to greet him, a U.S. Air Force Reaper drone launched a missile at his car, incinerating him and the nine loved ones gathered around him.

That's the story that the New York Times uncovered through extensive interviews with Ahmadi's neighbors and colleagues, as well as medical experts. The Washington Post did its own extensive reporting and reached the same conclusions about the events. The story that Gen. Mark Milley, chairman of the Joint Chiefs of Staff, told the public in order to justify the strike is very different.

Milley claimed that the attack was a "righteous strike" against ISIS-K members. Our military fed the lie to reporters that there was a second blast following the drone strike, proving that Ahmadi had explosives in his car, which he was planning to use in a second terrorist attack on the Kabul airport. Those "explosives" were, in fact, the cartons of water Ahmadi was bringing to his family. The Times and the Post both found that there was no second blast, just the one directed by the U.S. military that incinerated seven kids.

Responding to the Times' reporting on Twitter, Matthew Hoh, a disabled combat veteran and antiwar activist, put it best: "This very well sums up the last 20 years: fear, barbarism, ineptitude and lying."

Twenty years ago, Americans were justifiably terrified and grief-stricken over 2,996 lives being snuffed out. What was never justifiable or correct was the idea — pushed by politicians in the highest positions of power and media outlets with the largest platforms — that in exchange for those 2,996 lives, hundreds of thousands more needed to be taken. It was never justifiable, but it was possible because the U.S. lives taken on 9/11 were seen as inherently more valuable than the lives of Afghans or Iraqis.

Two decades later, as U.S. troops were finally leaving Afghanistan for good, an attack on the Kabul airport killed 13 U.S. troops. At least 170 Afghans were also killed in the attack, as well as in weapons fire by U.S. forces in the immediate aftermath. As with 9/11, however, the smaller number of American lives lost are what seems significant to the corporate press and politicians.

It was because the lives of those 13 American troops matter more to certain sections of the American public that President Biden vowed "revenge." In exchange for the lives of these 13 troops, 10 Afghan civilians, including seven children, became easy targets for retribution. Then our government lied about these victims, claiming they were terrorists. American troops may no longer be occupying Afghanistan, but if the devaluing of Afghan lives, the violence of the U.S. war machine, and the lies from our leaders continue. It could only be a matter of time before we're dragged back into war again: Biden has already made clear his commitment to keep bombing Afghanistan.

For those who have been paying attention, it is not surprising that Biden's drone strike killed a family in a grotesque mistake. It will not be surprising if additional bombing of Afghanistan kills more civilians. This is the very nature of the drone program, which became a norm of U.S. policy under the Obama administration. From January 2012 to February 2013, the US terrorized Afghanistan with Operation Haymaker, a military campaign of drone warfare in which 90% of victims were not the intended targets.

Former Air Force intelligence analyst Daniel Hale, however, was sentenced to four years in prison for having the courage to provide the public with information about the drone program and its disregard for civilians. If voices like his were not silenced behind bars, maybe there would be more public outrage, or at least public acknowledgement of the civilian toll of U.S. bombs and drones.

The war on Afghanistan will not be over until the drone program has been shut down, the Afghan people have been paid reparations with money taken directly out of the Pentagon's budget, and prison cells have swapped out whistleblowers for war criminals. To make that fuller kind of ending possible, the U.S. would also need a reckoning with the militaristic culture that first made war on Afghanistan a popular demand and later turned it into background noise that most Americans could ignore. That militaristic culture is still packed into American entertainment and news commentary, simmering until the next reason for war allows it to boil once again into a frenzy of xenophobic vengeance.

Sam Carliner is a journalist based in New Jersey. His writing focuses on U.S. imperialism and the climate crisis. He is also the weekend social media manager at CODEPINK.