From AOC to Cara Delevingne, are the Met Gala’s feminist displays meaningful or just performative?

Congresswomen donned "ERA NOW" and "TAX THE RICH" dresses, putting a new spin on the idea of fashion statements 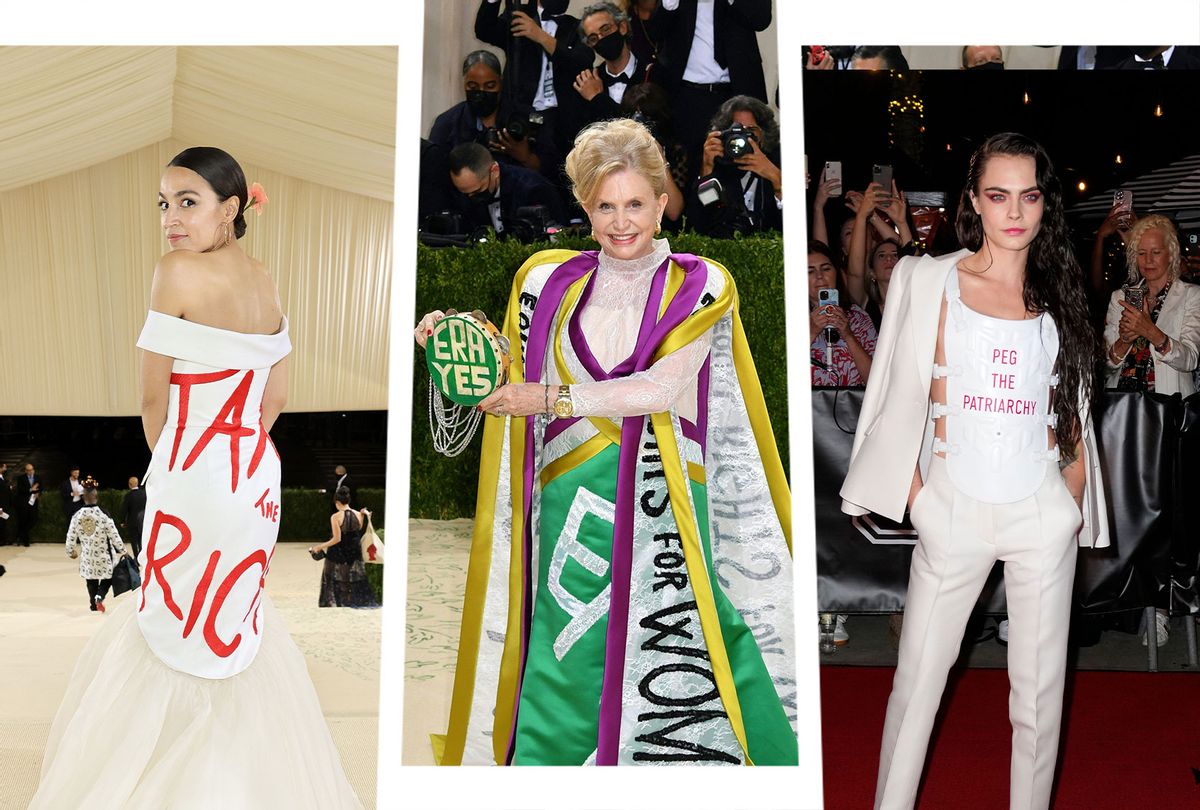 After a nearly two-year, pandemic-induced hiatus, the Met Gala returned on Monday evening, rife with feminist, LGBTQ and even apparent anti-capitalist displays. Fashion has always been political, a vehicle through which power and privilege can be flaunted (which is, you know, the whole point of the Met Gala) or critiqued. But political messages at such events have rarely if ever before been so overt as they were at the 2021 Met Gala.

New York Congresswoman Carolyn B. Maloney got the conversation started with a colorful and eye-catching gown covered in pro-Equal Rights Amendment taglines, and a purse that appeared to be a replica of the iconic green "ERA YES" sign of the 1970s. Her fellow New York Congresswoman Alexandria Ocasio-Cortez made a bold statement of her own with a floor-length white gown that reads "TAX THE RICH" in red on its back, created by rising designer Aurora James.

But that was just the beginning. There were feminist and progressive displays aplenty Monday night. Cara Delevingne attempted to send a message of some sort in a white pantsuit, with a top that read "PEG THE PATRIARCHY." Teen Vogue's editor-in-chief Versha Sharma donned a colorful, bright pink and gold gown with a matching clutch purse that reads "KILL THE FILIBUSTER." Soccer icon Megan Rapinoe was in attendance as well, decked out in the stars and stripes and clutching a purse with the text "IN GAYS WE TRUST."

One can appreciate the effort being made here to take societally important messages, or even just cheeky and subversive slogans, to a highly visible event like the Met Gala. Love it or hate it, the star-studded affair attracts worldwide attention, and can spark all kinds of conversation. The gala provides a platform that can either be left alone, maintaining its status quo of opulence, excess and privilege — or it can be wielded to focus attention on messages that disrupt this in some way, however small.

The reactions to these aforementioned political costumes at the Met Gala have been predictably mixed on social media. Pending who you follow, you might see endless applause for the "TAX THE RICH" dress, and a "yass queen!" or two for the "PEG THE PATRIARCHY" pantsuit. Or, you might see an endless onslaught of eye rolls at the performativite nature of it all, attending a stunningly capitalistic, privileged affair armed with but a pithy slogan to vaguely critique it.

Neither of these competing reactions is all right or all wrong. Fashion choices can, indeed, be performative activism when performed in isolation as an individual's sole act of political resistance. Many of the criticisms of the elected officials in attendance, who are supposed to be public servants rather than celebrities or cultural idols, are fair and even important.

But whether or not Ocasio-Cortez's attendance at the Met Gala was a capitalistic blunder, it shouldn't detract from how she raised hundreds of thousands of dollars for Texas abortion funds earlier this month, nor any of her legislation to redistribute wealth and hold the ultra-rich accountable. As long as someone is doing more than wearing clever outfits to high-society events, we shouldn't always be quick to mistake seizing an opportunity and a platform with empty performance.

What's easily lost in social media's quickness to outrage is that multiple truths can be held at once. We can simultaneously enjoy and recognize the frivolity of an event like the Met Gala. We can also enjoy the small, seemingly inane political messages on display at the gala and understand that we need infinitely more than glib slogans at ultra-rich-people parties to enact real change.

On the other hand, shaming people for enjoying the glitzy spectacle of cultural events like the Met Gala isn't the political action or bold act of resistance that keyboard activists seem to think it is. If we want to engage impactful conversations around class struggles, or address the actual crises of economic injustice and capitalist rot in everyday people's real lives, the Met Gala bears little to no relevance to any of this. Arguably the only feat less impactful to the material conditions of our day-to-day lives than enjoying the hollow displays of the gala is being angry at those who enjoy them.

Between a global pandemic, mass flooding and hurricanes, stagnant wages, and numerous other signs that the end of days is nigh, a "TAX THE RICH" dress alone won't save us. An "ERA NOW" gown and "PEG THE PATRIARCHY" pantsuit won't reverse Texas' nightmarish, dehumanizing abortion ban. Meaningful change requires meaningful action, and tangible redistributions of wealth and power. But as far as just trying to have some fun as we live through something of an ongoing apocalypse, none of these aforementioned fashion choices do much harm, either.