Alien probe or a "chunk of Pluto"? The scientific debate over 'Oumuamua continues 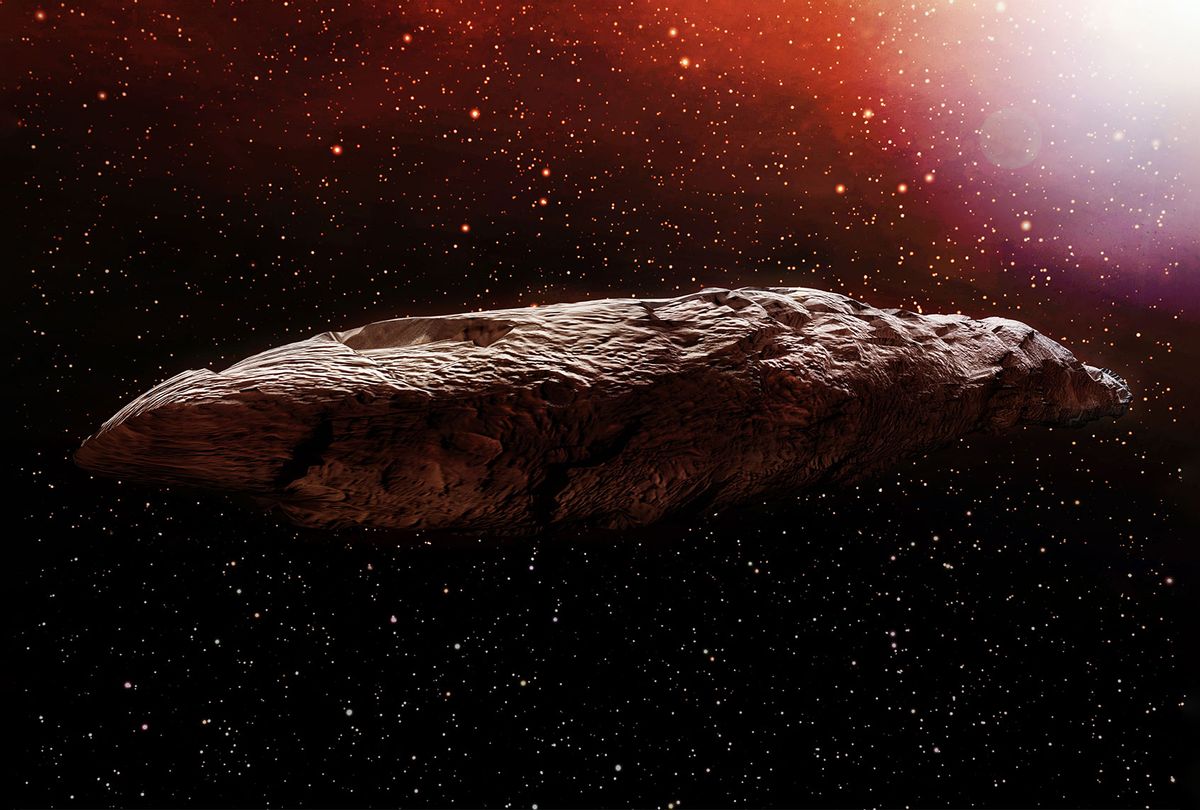 Originally classified as an asteroid, Oumuamua is an object estimated to be about 230 by 35 meters (800 ft x 100 ft) in size, travelling through our solar system. (Getty Images/Aunt_Spray)
--

'Oumuamua, the cigar-shaped object from another solar system that whizzed through our own in 2017, continues to perplex astronomers. Its inexplicable properties have prompted some to propose that the object was an alien craft of some sort, while other astronomers are steadfast in their insistence that it had natural origins.

Published in Journal of Geophysical Research: Planets, the researchers stated in a pair of papers that 'Oumuamua was likely a nitrogen ice ball, perhaps from a planet like Pluto yet in another solar system — not an artificially made light-sail spacecraft, comet, or interstellar ball of dust, as some researchers have previously suggested. Nitrogen, the primary component of Earth's atmosphere, occurs primarily as a gas on our home planet; yet in very cold conditions, it can freeze and become solid or liquid. The frigid surface of Pluto, for instance, contains a substantial amount of nitrogen ice.

"This research is exciting in that we've probably resolved the mystery of what 'Oumuamua is and we can reasonably identify it as a chunk of an 'exo-Pluto,' a Pluto-like planet in another solar system," said Steven Desch, an astrophysicist at Arizona State University and an author of the new study, in March 2021. "Until now, we've had no way to know if other solar systems have Pluto-like planets, but now we have seen a chunk of one pass by Earth."

Previously in 2020, in a separate paper published by a different group of scientists, researchers argued that 'Oumuamua was actually a hydrogen iceberg — a similar proposal to the nitrogen iceberg theory of the Arizona State researchers.

But if you thought the scientific world was closing the book on 'Oumuamua — or at the very least coming to peace with the idea that the interstellar object was of natural origin (and not alien made) — not everyone agrees with the Arizona State researchers. Multiple papers co-authored by Harvard physicist Avi Loeb have argued that it is unlikely that 'Oumuamua was a hydrogen iceberg, or a nitrogen one for that matter.

In a series of co-authored papers and a book, Loeb believes the most likely explanation is that Oumuamua was artificially made — perhaps some sort of light sail made by an alien civilization.

"I would say that the [idea it is of] artificial origin appears to me is quite likely and it should definitely be considered in the future," Loeb told Salon. "Of course, what we want to do is find more objects of that same type, and then catch them early enough on the approach to us so that we can send a spacecraft that will intercept the trajectory and take a close up photograph."

Loeb's latest co-authored paper, which has yet to be peer-reviewed, argues 'Oumuamua definitively was not a piece of a Pluto-like exoplanet or a glob of hydrogen ice. To disprove this, Loeb and his fellow researchers calculated how cosmic rays — background radiation that constantly permeates empty space — would have slowly caused such an "iceberg" to evaporate over millions of years of travel. If 'Oumuamua were comprised of such exotic ice, Loeb and his co-authors calculate that significant cosmic ray erosion would have whittled it down during its journey.

Simply put, Loeb doesn't believe there's enough hydrogen or nitrogen in nearby planets that could have accumulated to being 'Oumuamua's hypothetical original size.

Loeb stressed that we have never seen something like a hydrogen or a nitrogen "iceberg" drifting through space. If 'Oumuamura were such a thing, it would have to have originated from very nearby to avoid evaporating due to erosion.

"Those environments need to be close enough to us, or at least closer than a percent of the size of the Milky Way Galaxy, because otherwise these chunks would entirely evaporate," Loeb said. "The solar system or whatever produces them must be a very different environment."

Loeb does not rule out a natural (non-alien) origin for 'Oumuamua, but said that the numbers don't add up for something that was made of nitrogen.

"Arguing that it's a nitrogenous base to me, now that we did this calculation of the cosmic rays evaporating — it makes it very unlikely," he added.

Indeed, the clash over theories of 'Oumuamua's composition and origins are causing some tension among astrophysicists.

Part of the debate, as Loeb alludes to, stems from observations of the object's odd behavior when it was first discovered in October 2017. Back then, a postdoctoral researcher named Robert Weryk at the University of Hawaii was sifting through the data stream from the Pan-STARRS astronomical survey of the sky when he noticed an unexpected object. It appeared to be highly elongated, like a stick, with a long axis 10 times longer than its short axis — unprecedented for an asteroid.

Upon a further analysis, researchers found that it appeared that 'Oumuamua received an unexpected "push" from the sun as it left our solar system — as though it had a mirror or a sail of some kind that it was using for propulsion. The manner of its push resembled what one might see from a solar sail spacecraft, a type of proposed interstellar probe propulsion that humans actually tested with an experimental probe in 2010.

In any case, no one had ever seen anything 'Oumuamua at the time that it was first observed. Some scientists hypothesized that 'Oumuamua swung towards our solar system as a result of a gravitational slingshot of a binary star system; others postulated that it might be an odd comet, though no tail was evident. Thus the search began to collect and analyze as much data as possible before it left our solar system.

Loeb, who wrote a book about 'Oumuamua entitled "Extraterrestrial: The First Sign of Intelligent Life Beyond Earth,'' continues to believe that the only possible explanation (unless the data was wrongly collected) is that Oumuamua was something akin to a light sail spacecraft created by an extraterrestrial civilization.

Loeb's idea has understandably sent shockwaves through the scientific community and stoked controversy. Most astronomers coalesced around the idea that 'Oumuamua was of natural origin, rather than artificial.

In an interview, Desch told Salon Loeb's most recent paper was yet another "attack" on any explanation that 'Oumuamua was a naturally made object.

"We took great pains to make sure we were comprehensive about all the data that existed and we took into account everything . . . we're careful about it, and went through the peer review process, and I stand by our work," Desch said, adding that Loeb's paper doesn't include findings that suggest cosmic ray erosion is slower than they suggest in their calculations. "I can tell you that the experiments say [cosmic ray erosion] is a lot slower than he's saying — in fact we cited those experiments — and in this case they are just basically are saying, 'well, all of the energy of the cosmic rays can be used to erode the ice, but the experiments show that that's just not true.'"

Desch emphasized: "If you took a chunk of Pluto and you knocked it off and made it go by the sun, it would look, move and behave exactly as this object did."

Over the last couple of years, Loeb has been encouraging the scientific community to change and be more "open-minded to change." In Loeb's perspective, the idea that 'Oumuamua was artificially made has not been as widely embraced as the various ideas that it is of natural origin.

Desch said that most astronomers believe there are aliens out there, but do not believe that 'Oumuamua wasn't a sign of extraterrestrial life.

"If you ask almost any astrophysicist, 'Do you think there are aliens out there?' Almost 100% would say, 'somewhere in the universe, it's a really big place — but [it's] really hard for them to get here,'" Desch said. "But this thing? No, this is a snowball."

"We did the calculations from first principles," Loeb said of his research. "[Desch] underestimated the evaporation by cosmic rays in his paper."