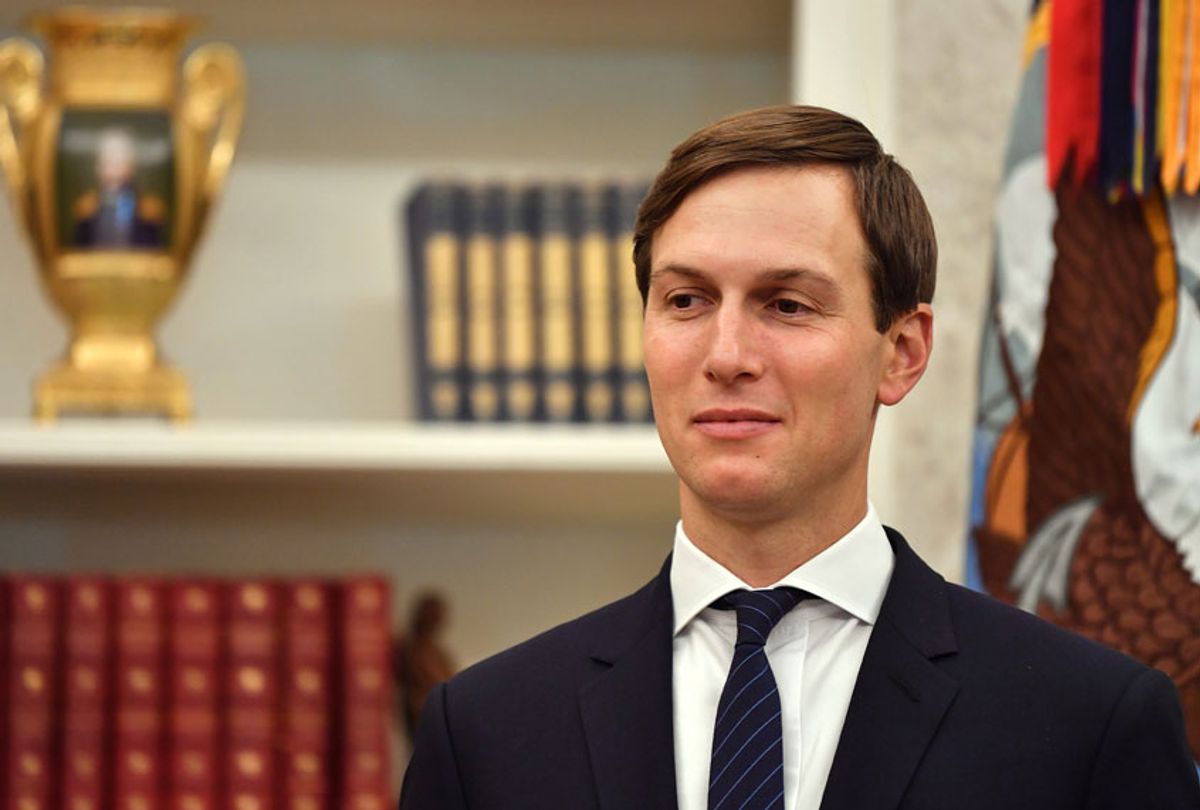 Properties owned by former White House adviser Jared Kushner's family company have filed at least 590 eviction lawsuits since the start of the coronavirus pandemic and more than 200 in 2021 alone, putting "countless tenants" at risk of losing their homes in parts of the U.S. where Covid-19 transmission levels remain dangerously high.

That's according to a detailed analysis conducted by the government watchdog group Accountable.US, which examined public eviction filings submitted largely by properties under the control of Westminster Management, a subsidiary of Kushner Companies. In his 2020 financial disclosure, Kushner—former President Donald Trump's son-in-law—reported $1.65 million in income from Westminster Management, the only item listed in the "Employment Assets & Income" section of the filing.

In a report (pdf) provided exclusively to Common Dreams, Accountable.US compiled the publicly available eviction suits submitted by Westminster properties, including 2021 filings that have not been previously reported. The group emphasized that its list of filings is likely incomplete, given that many lawsuits may not yet be available to view online.

The analysis comes less than a month after the conservative-dominated U.S. Supreme Court struck down a nationwide moratorium that protected millions of people from eviction for non-payment of rent—a decision that housing advocates warned could spark a devastating wave of evictions and worsen the pandemic.

"Jared Kushner is the poster child for ultra-rich landlords clamoring to boost their bottom line by kicking families to the curb, even if it comes at the expense of public health," Kyle Herrig, president of Accountable.US, told Common Dreams. "By siding with big rental companies, the Supreme Court veered even further to the right and welcomed a homelessness crisis that will fan the flames of the once-in-a-lifetime pandemic."

"With eviction protections gone," Herrig added, "corporate landlords like Kushner are relishing the soonest opportunity to evict the vulnerable, but it's still a choice: is it worth making themselves a little bit richer in the short term while making communities where their tenants reside far less healthy? We hope they put people before profits."

According to Accountable's report, Westminster properties and other companies in which Kushner holds investments have filed at least 96 eviction-related lawsuits in New Jersey since the pandemic began, and more than 40 this year alone. All of the New Jersey filings "were in counties that appeared to be covered by the extended CDC moratorium as of August 26, 2021," the group found.

The same was true of Westminster-owned properties in Maryland and Virginia, Accountable.US noted.

The Washington Post reported last November that throughout the pandemic, "Westminster has been sending letters to [Maryland] tenants threatening legal fees and then filing eviction notices in court―a first legal step toward removing tenants."

"Those notices are now piling up in local courthouses as part of a national backlog of tens of thousands of cases... as eviction bans expire and courts resume processing cases," the Post noted at the time. "Those facing eviction proceedings once courts begin hearing cases again include a nurse who struggled financially during the pandemic, healthcare administrators, and a single mother who is currently unemployed."

The Supreme Court's ruling against the CDC eviction moratorium on August 26 removed the last line of defense for many at-risk tenants who have struggled to pay rent amid the pandemic-induced economic downturn. A dashboard produced by the National Equity Atlas and Right to the City shows that more than 5.8 million households are currently behind on rent, holding a combined total of $15 billion in rental debt.

Kushner Companies is hardly the only corporate firm rushing to evict tenants who have been stuck waiting for federal rental assistance that's been infuriatingly slow to arrive. According to the latest data from Princeton University's Eviction Lab, landlords across six U.S. states and 31 cities have filed for 510,453 evictions since mid-March of 2020.

As Bloomberg recently reported, "owners of large apartment complexes have filed the lion's share of evictions against tenants" throughout the Covid-19 pandemic, which has exacerbated the nation's preexisting housing crises.

"Across a dozen cities and counties where data are accessible, evictions at just a small number of apartment buildings contributed between one-fifth and one-half of all pandemic eviction filings," Bloomberg noted, citing figures from the Eviction Lab. "If the evictions to come in the wake of the Supreme Court's decision follow the same course as the evictions that persisted while the moratorium was still in place, then they will disproportionately fall on Black and immigrant families living in class-B or class-C apartment complexes owned by large landlords."

Following the Supreme Court's decision to scrap the CDC eviction moratorium—which corporate landlords sued over and lobbied hard against—members of Congress faced growing pressure to enshrine emergency tenant protections into federal law. Hours after the Supreme Court's ruling, Rep. Cori Bush (D-Mo.) and dozens of other House Democrats sent a letter imploring their party's leadership to "act with the highest levels of urgency to advance a permanent legislative solution... to extend the life-saving federal eviction moratorium for the duration of the deadly global health crisis."

Weeks later, Congress has yet to act. Earlier this week, Bush introduced legislation to expand access to rental aid during the pandemic, but it's not clear when—or even if—the bill will get a vote in the House.

"So how are renters expected to stay afloat amid a nationwide housing shortage and crumbling federal protections from evictions?" Sabiha Zainulbhai, senior policy analyst at New America's Future of Land and Housing program, asked in a CNN op-ed on Tuesday. "Unfortunately, the answer is not clear."

"Given the logjam in the distribution of rent relief, there's diminishing hope that aid will reach renters' doorsteps before eviction notices will," Zainulbhai wrote. "Despite federal guidance, the distribution of this aid has been too slow and ineffective to meet the scale and the pace of the need. Meanwhile, the Delta variant is still a threat, hiring has slowed to its lowest rate since January, and to top it all off, pandemic unemployment benefits have expired. The outlook for renters is not good."