All signs point to bust for D.C. "Justice for J6" rally as TrumpWorld says "stay away" 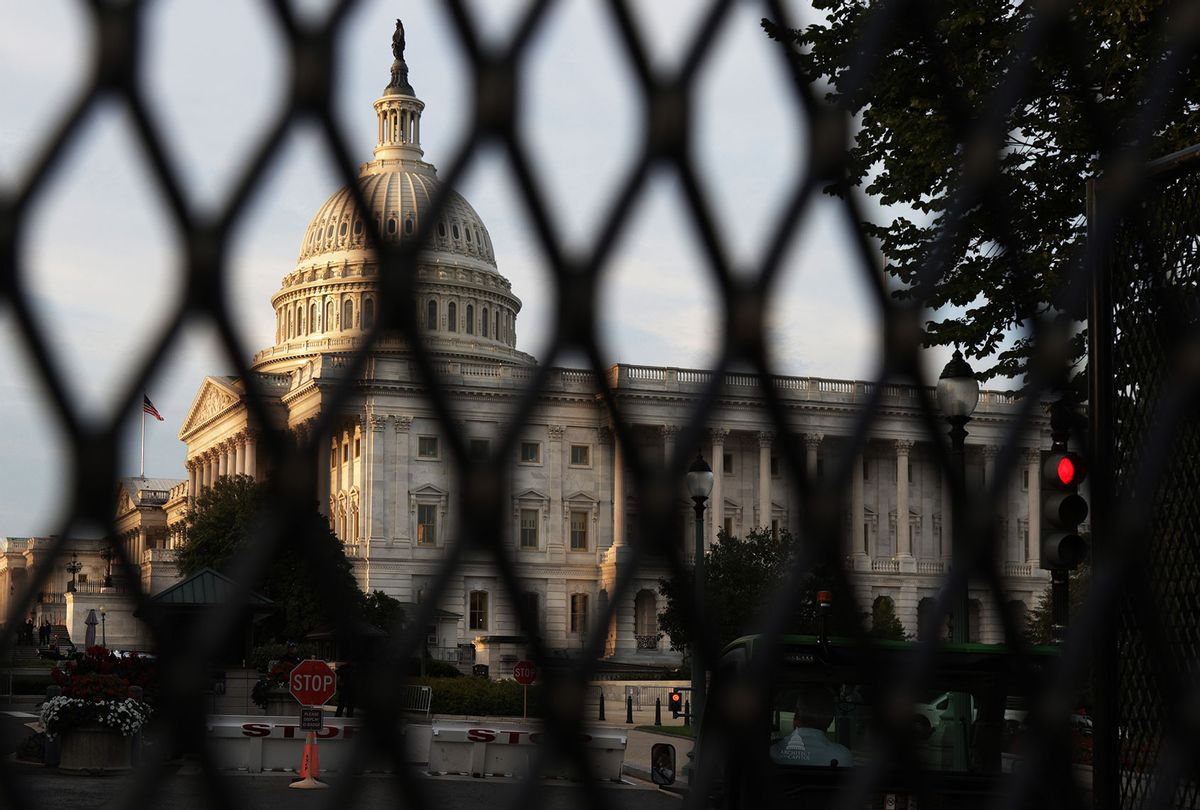 A fence surrounding the U.S. Capitol has been built overnight for tightening security on September 16, 2021 in Washington, DC. Security in the nation's Capital has been increased in preparation for the Justice for J6 Rally, a rally happening this weekend in Washington for support for those who rioted at the U.S. Capitol on January 6 to protest the 2020 presidential election outcome. (Alex Wong/Getty Images)
--

WASHINGTON — With officials warning Washington D.C. to brace for potential violence this weekend, all attention turns to a pro-Trump rally slated to occur on the grounds of the United States Capitol Saturday dubbed "Justice for J6," organized by a little-known former Trump campaign aide.

The organizer of the Saturday rally, which is intended to spotlight those who are serving time for participating in the failed insurrection on Jan. 6, is a former Trump campaign aide by the name of Matt Braynard. He also leads the right-wing nonprofit, "Look Ahead America."

A few weeks back, while the rally was in its earlier stages, Braynard told Salon that the event has "a permit," just as two previous events he held in Washington did. Both "occurred without incident," he said.

Braynard furthermore said the goal of the Saturday's event following the deadly Capitol riot is to "raise the profile of the abuse of the non-violent political prisoners" and "demand equal treatment of the 500 plus protestors who are being politically persecuted." He also said he plans to promote the conspiracy theory that the FBI was involved in the planning of Jan. 6.

And though Braynard's ties to Trump are well-publicized, in mid-August he added the rally "is not about the election, about any candidates, about any outside organizations (other than LAA). We are asking everyone who comes to not wear or bring anything with any organization/candidate/party logos. Just the American flag/patriotic symbolism and signs that are on message with the abuse of these political prisoners."

Despite these assurances, over the past week almost all TrumpWorld royalty has made a point to call on their own followers not to attend the rally in D.C. and distance themselves from the event.

"Do not attend the FBI rally in DC on the 18th," Ron Wakins, the former administrator of 8chan who has long been rumored to be behind the far-right QAnon conspiracy theory, wrote on Telegram. Earlier this week, longtime GOP operative Roger Stone also urged all Trump supporters of good faith to stay away from the Saturday rally in D.C. "I don't know a single person in the MAGA movement who's going. It's a setup," he said. "No, patriots, stay away from Washington!"

Even Trump himself called the event a "setup" in an interview with The Federalist Thursday.

Though he did signal support for the march's overarching theme in a later statement.

"Our hearts and minds are with the people being persecuted so unfairly relating to the January 6th protest concerning the Rigged Presidential Election," Trump wrote in a press release. "In addition to everything else, it has proven conclusively that we are a two-tiered system of justice. In the end, however, JUSTICE WILL PREVAIL!"

Jared Holt, a resident fellow at the Atlantic Council's DFR Lab, who researches and tracks right-wing social media posts and conversations told Salon in a phone interview there isn't any evidence to suggest that the Saturday rally will be a Jan. 6 repeat.

"The fact of the matter is, the Capital Police response to this event has elevated it into something important, regardless of what ends up happening on the ground Saturday," Holt said. "From our analysis, we are not seeing any of the usual tale telltale signs of a mass mobilization towards the Washington D.C. area. We have seen a few passing comments or individual remarks that do suggest that there may be some bad actors that show up to DC, but certainly nothing that even holds a candle to Jan. 6."

That said, The Department of Homeland Security said that there had been a "small number of recent online threats of violence" stemming from the event.

Asked about the remarks made by Stone and others who are not going anywhere near the rally, Holt said it's not in their best interest to aid in such an effort following Jan. 6.

"I think a lot of these groups don't have an interest in coming to DC for this kind of event — that they're willing to put themselves on the line, and particularly in regards to figures like Roger Stone and The Proud Boys, because their name has come up so many times in conversations about Jan. 6."

Holt believes that those pro-Trump figures that have been caught up and/or connected to the Jan. 6 Capitol siege might be seeking to get out ahead of the rally this time around. "I think they have a little bit of extra motivation to try to get out ahead of it, and put some public distance between whatever does happen on Saturday and themselves," he added.

Despite there being little evidence of a massive rally on the horizon, Capitol Police are taking precautionary measures to ensure things don't get out of hand, including re-assembling fencing around the perimeter of the building. "The decision to put fencing back up around the U.S. Capitol strikes me as perhaps even overly cautious, but I certainly understand where Capitol police are coming from," Holt said.

"They do not want to give the perception or any leeway to suggestions that they are underprepared for this event," he added. "So it strikes me as kind of a better safe than sorry decision."

In a Monday statement, the US Capitol Police outlined that they have been tracking "online chatter about a demonstration planned for September 18," adding that "the Capitol Police Board approved a plan to temporarily put up a fence around the Capitol Building. When the inner-perimeter fence was taken down in July, USCP leaders noted that from time to time, they may exercise the ability to enhance security around the Capitol Complex."

As for Braynard himself, Holt said the former Trump campaign aide lacks credibility in pro-Trump circles, and that turning out a substantial crowd for the event will be a struggle due to a lackluster network of allies.

"Above all, Matt Braynard is a low-rent propagandist. And as far as organizing goes, he simply doesn't have the kind of network on his own that he would need to pull off a really massive event by himself," Holt said. "He's the kind of guy that has to rely on the people that he does have in his network, which includes people like Steve Bannon, to try to get a lot of that work done for him."

On Friday morning, during an appearance on C-SPAN, Braynard argued that there is a lot of "misinformation out there" about the rally and that his organization "condemn[s] all violence," despite advocating on behalf of individuals who committed violence on Jan 6.

A robust and noteworthy police presence and countless dump trucks — acting as barricades — were on scene early Saturday morning in the district. As of an hour before the event, it appeared there were more journalists than attendees present.