“It’s over and nothing makes sense”: QAnon believers struggle to cope with Biden inauguration

“Well I’m the official laughing stock of my family,” one QAnon follower said after Joe Biden was sworn in 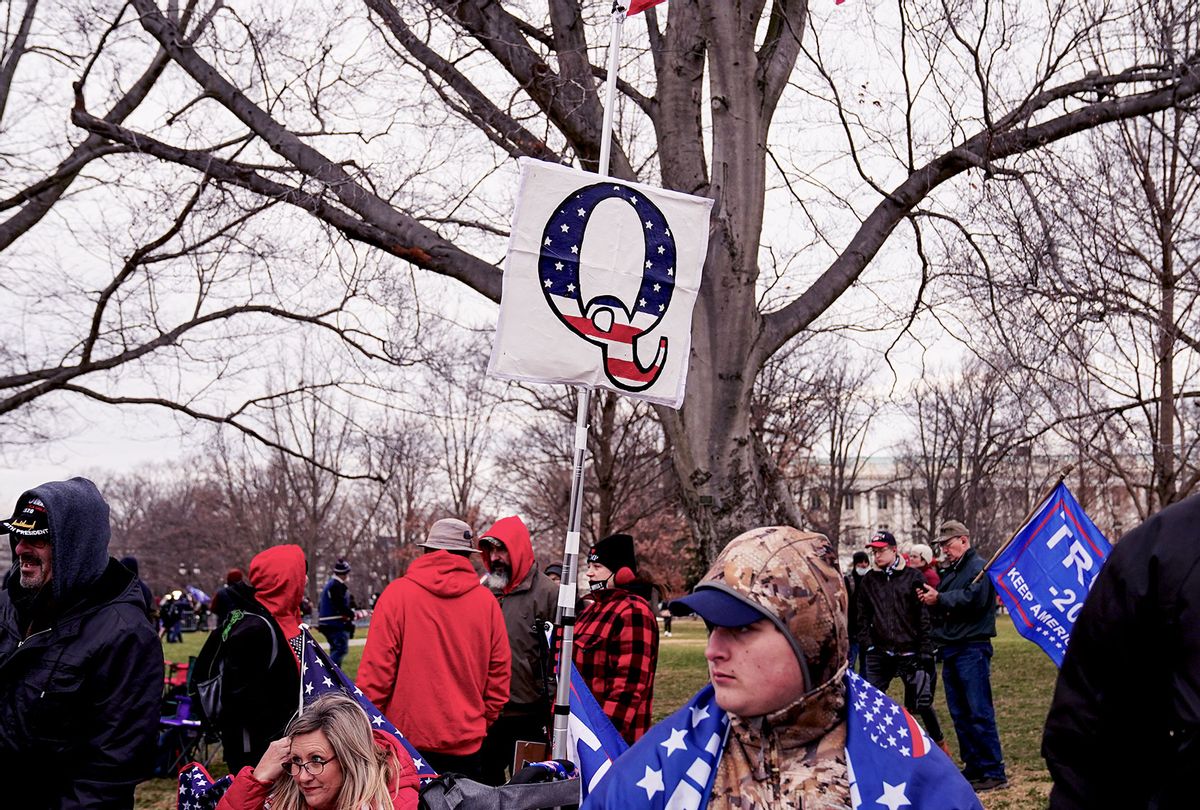 Supporters of Q-Anon and crowds gather outside the U.S. Capitol for the "Stop the Steal" rally on January 06, 2021 in Washington, DC. Trump supporters gathered in the nation's capital today to protest the ratification of President-elect Joe Biden's Electoral College victory over President Trump in the 2020 election. (Robert Nickelsberg/Getty Images)
--

Followers of the QAnon conspiracy theory have for years believed, in the face of all available evidence, that Donald Trump would soon begin mass arrests of his political foes and retain power indefinitely. Many of them appear to be struggling to cope with reality after President Joe Biden was sworn in on Wednesday and the mass arrests never came.

Many diehard conspiracy theorists, stoked by Trump and his top allies, have long predicted "The Storm," a day of reckoning Trump would lead the National Guard in mass arrests of Democrats, "deep state" elites and Hollywood celebrities whom Q fans believed were running a cannibalistic, satanic child trafficking ring. This would in turn usher in the "Great Awakening," when the world would discover that Trump had been leading the fight against this cabal all along. But the "storm" never came, and Trump flew off to his Mar-a-Lago golf resort as expected while Biden was sworn in as the 46th president. The only "mass arrests" were of Trump supporters who stormed the Capitol on Jan. 6, many of whom were dressed head-to-toe in QAnon gear.

"It's over and nothing makes sense," one QAnon forum user wrote. "Q was a LARP the entire fucking time," wrote another, describing the entire conspiracy theory as a live-action roleplaying game.

QAnon, which is effectively a greatly amplified version of the baseless Pizzagate conspiracy theory, began in October 2017 when an anonymous poster on the far-right imageboard 4chan who went by "Q," and who claimed to be a high-level government official, and began to post "clues" about Trump's secret plot to take down the deep state, Democrats like former President Barack Obama and Secretary of State Hillary Clinton, and celebrities like Tom Hanks and Chrissy Teigen. QAnon adherents had cited many previous dates in their past mass-arrest predictions that all came and went, but some still held out hope that Trump would lead the mass arrests right up until Biden was sworn in shortly before noon Eastern time on Wednesday. Some claimed that the National Guard troops deployed to protect Biden's swearing-in were actually there to carry out the mass arrests.

"Well I'm the official laughing stock of my family," a user wrote in a QAnon group chat. Another questioned whether Biden was a "hologram."

Speculation has swirled for years about who was behind the Q account, which stopped posting shortly after Trump's election defeat. A 2018 NBC News investigation concluded that Q could likely be traced back to three people who first pushed the posts on 4chan and 8chan and had created similar accounts in the past. Some have speculated that Q was Ron Watkins, the former administrator of 8chan, which has since changed its name to 8kun after it was kicked offline after  the 2019 El Paso Walmart shooter published his manifesto on the platform.

Watkins posted a message on Telegram urging people to "go back" to their lives and "remember all the friends and happy memories we made together over the past few years." Some users in the channel responded by accusing him of being a CIA "plant."

Biden's inauguration set off a wave of confusion and numerous varieties of grief among the true believers.

"I dont think this is supposed to happen?" one user wrote during Biden's swearing-in. "How long does it take the fed to run up the stairs and arrest him?"

Opinions appeared divided on what the future may hold. Some predicted that Trump and the military still "have a plan" that will kick in at some point after Biden takes office. Many looked for hints or "clues" in Trump's farewell speech and the statements made by his children. Others urged patience, insisting that the former president still had some sort of mysterious "Trump card" to play.

Others even sought to change direction, suggesting that "Biden has been part of QAnon all along."

"The more I think about it, I do think it's very possible that Biden will be the one who pulls the trigger," one user wrote in a popular QAnon Telegram channel.

"The most hardcore QAnon followers are in disarray," Daniel Jones, the president of extremism watchdog Advance Democracy, told CNN. "After years of waiting for the 'Great Awakening,' QAnon adherents seemed genuinely shocked to see President Biden successfully inaugurated. A significant percentage online are writing that they are now done with the QAnon, while others are doubling down and promoting new conspiracies."

"What we're seeing is a trend in increasingly bunker-down, apocalyptic language," Joel Finkelstein, co-founder of the anti-disinformation group Network Contagion Research Institute, told The Washington Post. "It's gone from [talk of] a revolution to a civilization-ending kind of collapse."

QAnon followers have largely been relegated to message boards and apps like Telegram and the right-wing social network Gab after Twitter and Facebook cracked down on accounts associated with the conspiracy theory. Screenshots of QAnon adherents shocked by the inauguration quickly went viral and drew rampant mockery. Now white supremacists have seized on the disillusionment on these platforms and are actively trying to recruit members to their cause, according to Nick Backovic, a researcher at Logically.AI, which identifies disinformation online.

"There are lots of people feeling shocked, cheated and angry. As scary as that is on its own, it's the rest I'm most worried about," he told NBC News. "We're seeing a lot of neo-Nazis preying on the potentially disenchanted Q people."

"Focus less on trying to red pill [i.e., recruit] them on WW2 and more on how to make them angrier about the election and the new Democrat regime," a white supremacist recruitment message on Telegram said, according to the report. "Heighten their burning hatred of injustice."

Other experts worried that the QAnon conspiracy theory had spread overseas to countries like Germany and Japan.

"They're going to reemerge at some point because they've internationalized," Finkelstein told the Post. "There's a metastization of QAnon from a national story to a global revolution."