Flynn tagged his lawyers and an organization founded by Charlie Daniels, who died two days later 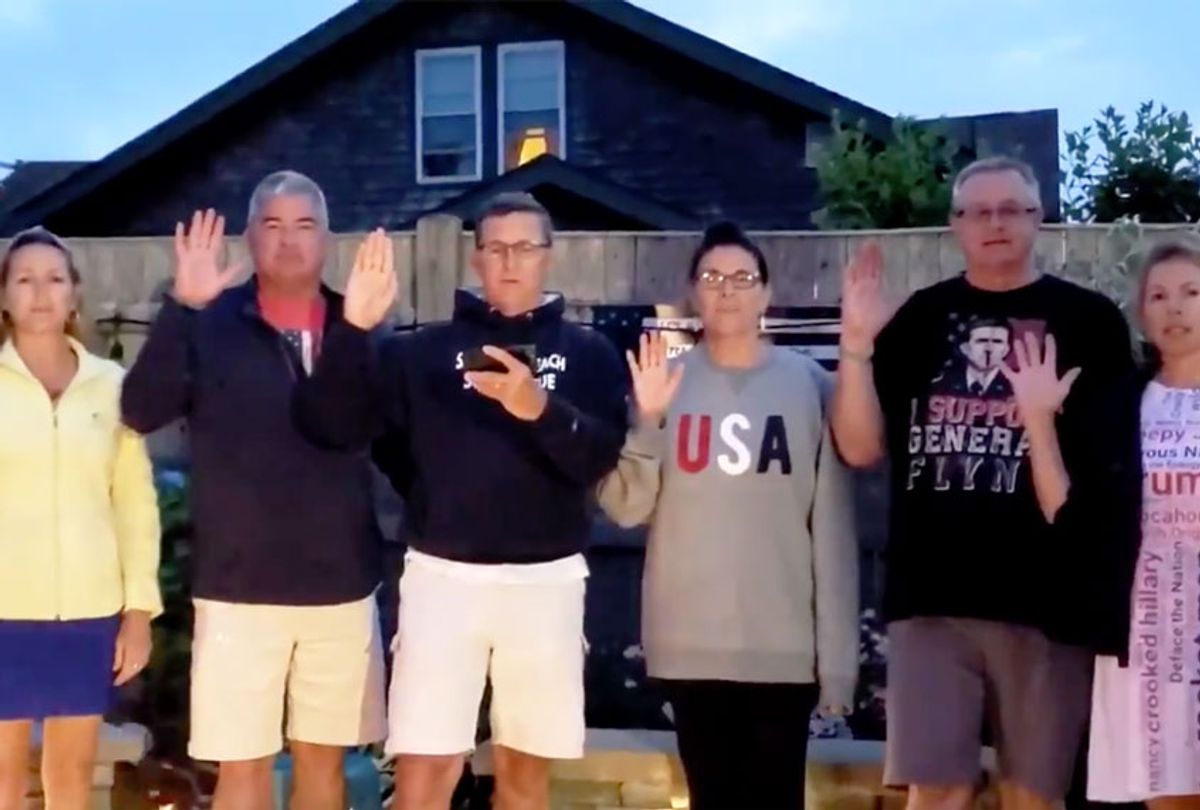 President Donald Trump's first national security adviser Mike Flynn tweeted a video on Independence Day in which he administers an oath of allegiance to the QAnon conspiracy theory to a small group of family and friends.

In the video, Flynn, at the center of a group gathered around a suburban backyard fire pit, reads the U.S. oath of office from his phone screen. The group repeats the lines after him, each holding a hand in the air.

At the end of the constitutional oath, Flynn adds the QAnon slogan, "Where we go one we go all," which the group repeats. "God Bless America!" they all cheer as they pump their fists.

Flynn tagged the tweet "#TakeTheOath," an online challenge to join the QAnon movement. He also tagged his wife Lori Andrade, his brothers Jack Joseph, his sisters Barbara Redgate and Mary O'Neill, his attorneys Sidney Powell and Molly McCann, as well as The Journey Home — a veterans advocacy group founded by Charlie Daniels of the Charlie Daniels Band.

QAnon is essentially Pizzagate on steroids. Believers decode "clues" posted by a supposed high-level government official who only identifies as "Q." Through a series of cryptic questions posted to the online message board cesspool 4Chan, "Q" has over the last few years constructed an alternative reality in which the Russia investigation provided cover for former special counsel Robert Mueller to work together with Trump to bring to justice a global power ring of thousands of alleged pedophiles who are also cannibals, including Hillary and Bill Clinton and Barack Obama. But they will apparently be on their way to Guantanamo Bay any day now after Trump executes thousands of sealed indictments.

Since Q first posted in October 2017, the movement has slowly and surprisingly become more mainstream. QAnon faithful have received White House invitations, enjoyed dozens of presidential retweets and even won Republican primary races. At least one candidate seems positioned to win a congressional seat this November.

It has also become increasingly dangerous. An FBI memo warned last August that the peripheral right-wing movement posed a domestic terrorist threat, and the group has promoted drinking bleach as a cure for COVID-19. Despite the alarm from his own law enforcement, Trump himself has appeared to nod at QAnon supporters in campaign ads and dozens of tweets.

Flynn's 2017 guilty plea for lying to the FBI about his contacts with a former Russian ambassador plays a central role in the conspiracy theory, which portrays the former three-star general — who served under Obama — as being persecuted by the deep state for his inside knowledge.

A number of the flock even believe Flynn might be "Q" himself. (Flynn first coined the term "digital soldiers" embraced by QAnon followers, which is a reference to U.S. cyber capabilities.) To express this, some have added three "gold star" emojis to their Twitter pages, a nod to the retired general's military rank. Several individuals tagged by Flynn in his July 4 tweet have added the stars, including both attorneys.

Until recently, Flynn had kept mum about Q, and and his son, the noted Pizzagate proponent Michael Flynn Jr., asked believers to leave his dad out of it. But sometime in the last month, Flynn added the QAnon hashtag "#TakeTheOath" to his Twitter bio.

Flynn, who penned a column in The Hill on Election Day 2016 advocating for the interests of the Turkish government — for which he had to register belatedly as a foreign agent — also recently published two bizarre op-eds on a website called The Western Journal, rife with QAnon imagery, pseudo-Biblical language and calls-to-arms against non-specific "forces of evil."

One of those columns is titled, "Forces of evil want to steal our freedom in the dark of night, but God stands with us." Another, warning of a looming war with evil, says: "We have to understand there are two opposing forces: One is the 'children of light' and the other is the 'children of darkness.'"

Both columns are followed by the site's own pledge to its readers: "We are committed to truth and accuracy in all of our journalism. Read our editorial standards."

The excitement about Flynn has ripped through the QAnon world, with Republican Senate nominee Jo Rae Perkins accepting the "#TakeTheOath" challenge to become a "digital soldier" in a social media video of her own.

Flynn reversed his guilty plea this year, and in May, Attorney General William Barr directed the Department of Justice to ask a federal judge to dismiss the case. An appeals court handed Flynn — and the QAnon faithful — a major victory last week when it sided with Barr and ordered the case dropped.

Reports have said Flynn cut a cooperation deal with Mueller in part out of concern for his son, who worked for his consulting firm during the time in which he was operating as an unregistered agent of the Turkish government.

By Flynn's account, the prosecution has nearly bled him dry. One of his attorneys took to Fox News weeks before Barr ordered the case dropped to complain that Flynn had shelled out millions of dollars in legal fees, as well as sell his home. His attorneys have set up a legal defense fund, but donors are untraceable.