In times like these, what we need most is bowl food 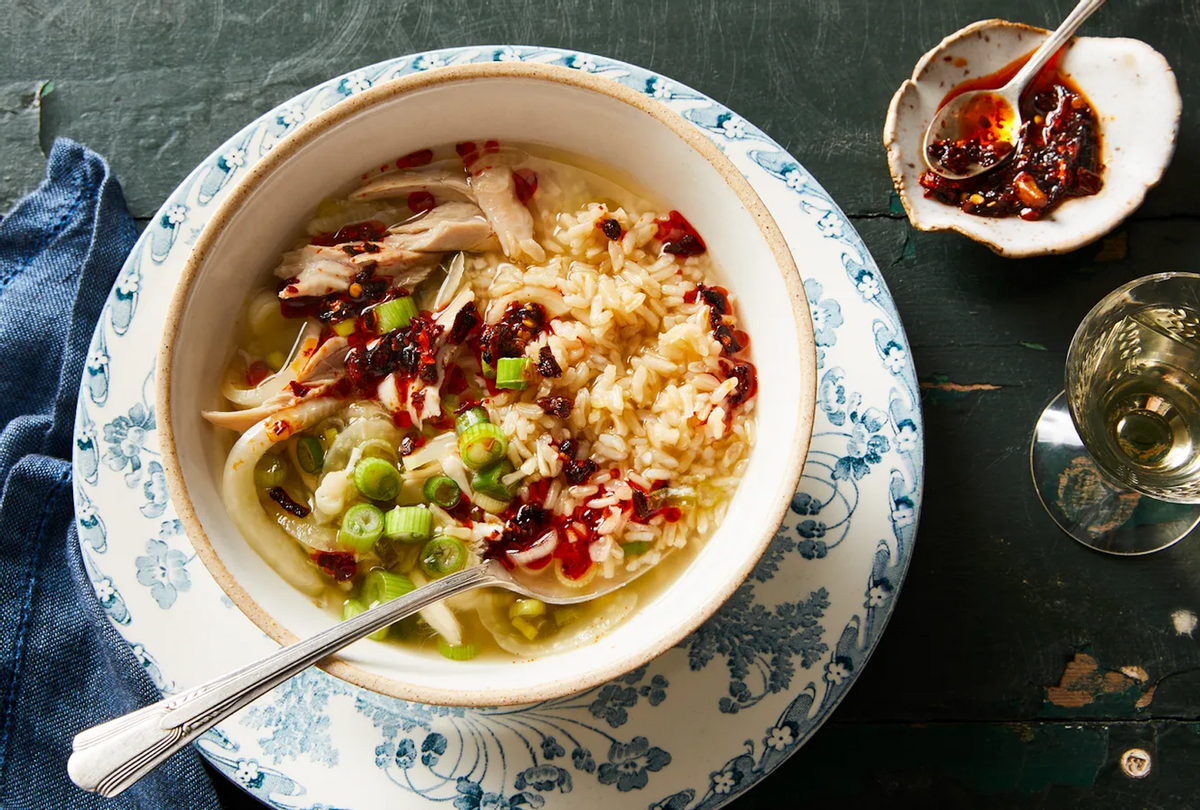 Welcome to Set It & Forget It, a series about all the ways we rely on our Crock-Pots, Instant Pots, and stovetops for a healthy dose of comfort cooking.

Deeply in need of a warm, comforting meal after a long day of work? Under the weather and seeking something spicy to clear out your sinuses? On the hunt for an easy dinner with a minimal ingredient list that tastes like you put in hours of work? These 11 slow-cooker soups check all those boxes — and then some.

To start, a chicken soup you can make from start to finish in the slow cooker. Lots of grated ginger and garlic perfume this aromatic broth, then razor-thinly sliced fennel and scallions join the party. For a little protein, stir in shredded cooked chicken — last night's leftovers or grocery-store rotisserie work great. Pop the top on the slow cooker and you're basically done. To serve, come back in a few hours to brighten the soup with a big hit of lemon juice, then ladle it into bowls over cooked soba noodles or brown rice. For a final flourish, drizzle on crunchy, spicy chili crisp. Presto: a weeknight soup that tastes like you've tinkered all afternoon long.

This stew's body begins with blended jalapeños, tomatillos, and cilantro, which form a verdant paste. This gets poured into the Crock-Pot with usual stew suspects like oil, broth (vegetable!), onion, garlic, as well as two cans of beans. Though any beans will taste great in this recipe, here I use those you might find in a chili, specifically pinto and black. After the stew cooks down, slowly, a potato masher is used to crush most of the beans. This process releases starches, which will thicken the stew even further. You could serve this meal with any cooked grain like rice or quinoa, but I think crushed tortilla chips are the superior accompaniment.

Pasta e fagioli is so named as it's literally a soup of "pasta and beans." As the soup made its way into Italian-American neighborhoods in the United States, fagioli (or fosule) morphed into "fazool." This soup can be made entirely in a slow cooker, but for a bit more depth of flavor, sauté the onion, carrot, and garlic separately in a skillet. If you're not planning to finish all the soup tonight, cook the pasta separately until just barely al dente, then ladle both pasta and soup it into bowls, storing leftovers separately. If you'll finish all the soup tonight, stir the dry pasta directly into the slow cooker.

If your go-to order at an Italian-American restaurant is chicken parm, this is the soup for you. Skip the pasta and serve this dish with crusty bread for sandwich vibes if that's more your thing, but either way, top with plenty of parmesan.

Slow-cookers love a lentil, there's no doubt about it. And ding-ding-ding: you probably already have everything you need for this ridiculously simple soup already in the kitchen (brown lentils, stock, onion, tomato paste, olive oil, and spices). Serve with any bread or cooked grain and a crumble of feta or big dollop of yogurt.

OK, we know this is a "stew" not a soup, but really, isn't a stew just a thicker soup? Don't overthink it. Boneless, skinless chicken thighs go shreddable and tender after a long cook in tomates, kalamata olives, and artichokes.

Everyone's favorite creamy, spicy-sour soup is a revelation after a few hours in the slow-cooker. If you're not feeling like chicken, try using torn firm tofu instead.

A hearty vegetarian soup fortified with lentils, celeriac, parsnips, and parmesan (cheese and rind!), this is one of those simple cold-weather lunches or dinners you'll make once, then add to your weekly rotation.

This creamy, filling, 100% vegan soup is the perfect meal to throw together on a weekend morning. Pretend you're in a cute cafe and serve it with lemony greens and thick slices of toast.

This classic soup is a full meal in a bowl — mushrooms, cabbage, tofu, noodles all swimming in a tangy vegetable broth, just waiting to be slurped.

Cumin, coriander, turmeric, and cinnamon pack the punchiest of flavors into this lentil and cauliflower soup. The recipe calls for spinach, but any green you have on hand will do. Make it in advance and let the flavors meld, then brighten it up with fresh lemon juice and cilantro right before serving.