Cry macho: Why scared white guys are so dangerous 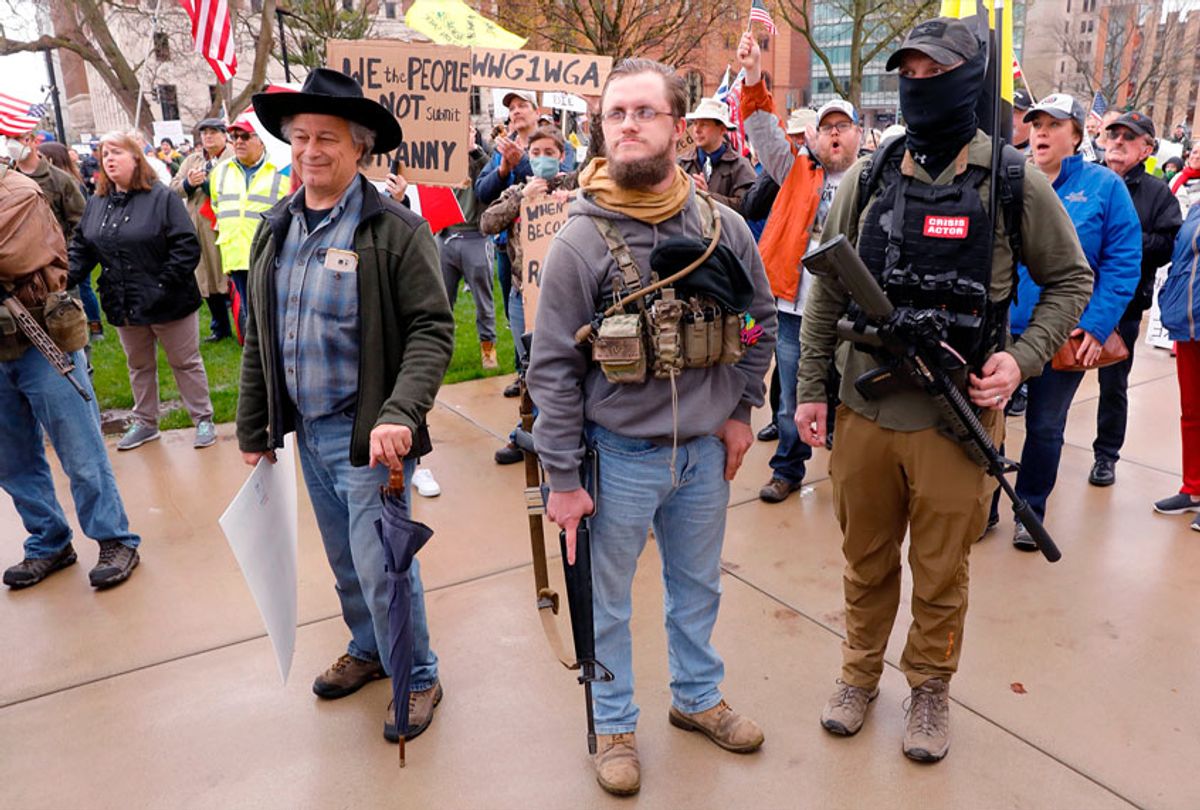 I once lived next door to a guy in Memphis who owned more than a hundred firearms, some of which were strewn around his two-bedroom house and even lying on the kitchen counter. I saw them when he asked me to come over one afternoon to help him move his 700-pound gun safe.

Neil, as I'll call him, also kept two large dogs, one of which was a cane corso that was so unpredictable it couldn't be allowed near his two young children. Neil was a nice guy but perpetually anxious and nervous, which in turn made me uneasy about his family's safety. I worried about a gun accident or one of the dogs getting loose and mauling a passerby.

The fact is, there are a lot of Neils in America — white guys in a near-constant state of fear about their personal safety. And rather than being merely pitiful, guys like Neil are actually dangerous.

They're the hyper-armed neighbors with itchy trigger fingers, who are convinced they'll be the victims of a home invasion; who treat any Black or brown person as an imminent threat; who see foreign terrorists behind every bush; who believe the government is trying to poison them, plant a chip inside them, or take away their hunting rifles; who think that crime is far worse than it is and on the verge of spilling into outright anarchy.

For a particular type of frightened man, this fear manifests itself in bullying and performative machismo. You see this in many viral videos:

In foreign policy, this deep-seated insecurity results in chicken-hawk syndrome: men who couldn't be bothered to serve in the armed forces yet pretend to be steely-eyed gladiators if it means sending someone else's kids off to fight a war. But real American soldiers generally haven't been its biggest warmongers. In fact, like Dwight Eisenhower or John McCain, they've usually cautioned against cheap talk and artificial courage. The paper tigers, by contrast, talk a big game and seem to care only about superficial appearances.

Donald Trump is the poster child for this feigned valor. When an actual battle presents itself, he discovers bone spurs in his foot, but then years later crows about what a warrior he is. Anyone who's been around a loudmouth blowhard will recognize the personality: a wimp masquerading as a tough guy. As Jay-Z described the type in "99 Problems," he's "loud as a motorbike but couldn't bust a grape in a food fight."

That's the case for so many of these performers. Their bravado is all for show. But in advocating violence, hiding behind a mob or inciting mentally ill people, they can do damage.

Where does this troubling insecurity come from? It is no doubt stoked by the purveyors of outrage on talk radio, cult TV and social media. Fear sells — literally, in some cases — and it also turns out the vote and increases audience share. Talk about demographic change also appears to scare some white people into more racist attitudes. Couple that with feelings of inadequacy or weakness, and perhaps that's why noticeable numbers of American men act out with belligerence. Internet trolls are the most notorious exemplars of this angry, bullying behavior.

What can be done about it? First, it's important to stand up to bullies and not reward their tantrums. Second, we need to encourage people to participate in the political process but to do so peacefully. Once someone starts rejecting data or debate in favor of physical force, as the Pennsylvania political candidate did, it's time for the responsible adults to intervene and to remind him and other babies that violence and threats sabotage our democracy and won't be tolerated, because even bluffs are corrosive and inspire other copycats. And, third, we should treat these performances with the ridicule they deserve. They often issue from overcompensating man-boys who feel ignored and unappreciated. But there should be a social price for bad behavior, and mockery is a fitting response.

However we respond, it's important to recognize that their fear and anxiety make them dangerous and sometimes unstable neighbors. They're a public menace, so approach with caution.

Joe Hayden is a professor of journalism at the University of Memphis. Follow him on Twitter: @JoeZeefus.