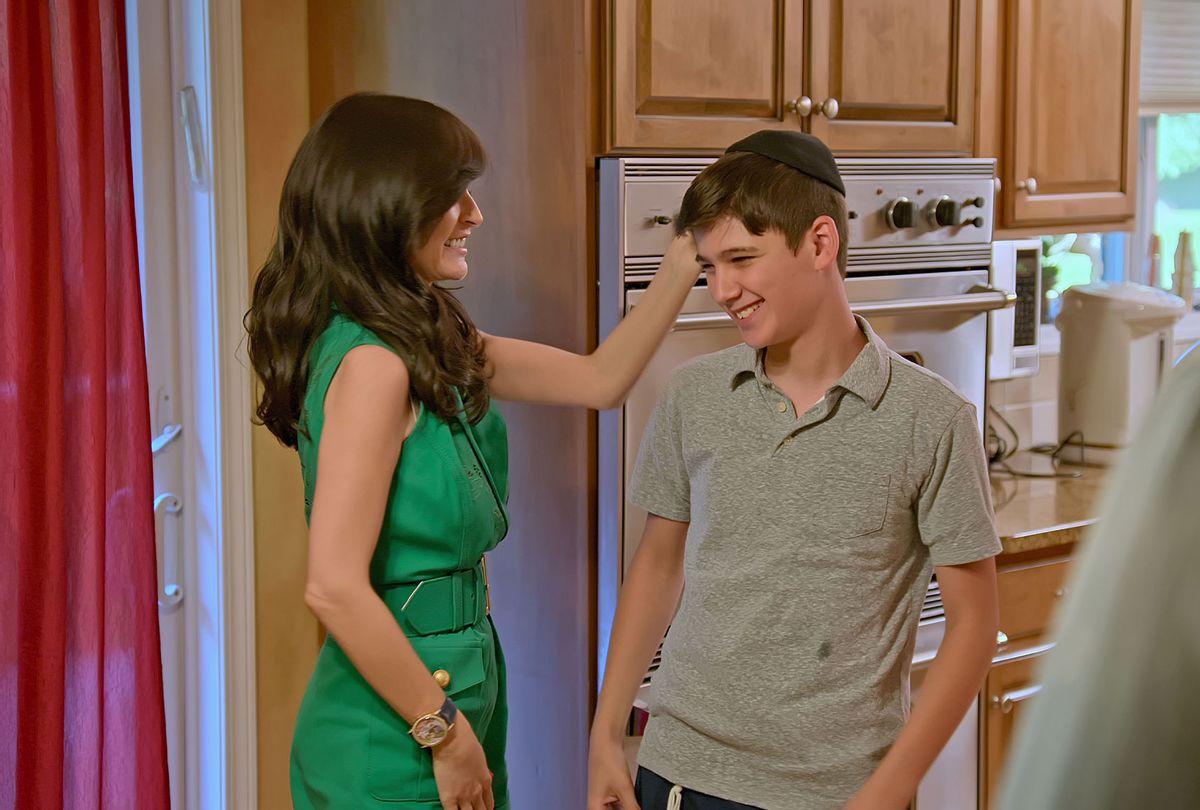 Julia Haart and Aron Hendler in "My Unorthodox Life" (Netflix)
--

Over the past four years, Netflix has released several shows related to people leaving the ultra-Orthodox Jewish community. These shows include "One of Us," "Unorthodox" and most recently the reality TV show "My Unorthodox Life."

Each time, many in the ultra-Orthodox Jewish community have raised questions regarding their representation.

We are an anthropologist and a philosopher who have been analyzing how mainstream media depicts ultra-Orthodox Jews who leave their communities, known as "exiters" or "OTD" — which means "off the derech," the Hebrew word for path. We also study how these individuals tell their stories through the media.

Our research shows that by sensationalizing stories of suffering within exiters' experiences, notably those of women, mainstream media has created a shallow narrative about the exiting process.

But with "My Unorthodox Life," ultra-Orthodox women responded to the image being projected in the show in an unpredecented way. Instead of just discussing it privately and informally, many women participated, for the first time, in a public social media campaign to tell their own stories.

Mainstream TV typically tells exiters' stories in a context of wider criticisms of ultra-Orthodoxy, which is presented as religious extremism or fundamentalism. While Orthodox and ultra-Orthodox worlds are extremely diverse in their practices of Jewish laws, known as Halakha, popular depictions do not encapsulate this plurality. Women are generally cast in the leading roles, with the shows drawing on a liberal feminist trope of exposing religious life as traumatizing and oppressive.

In "My Unorthodox Life," this narrative is somewhat altered. While traumatic experiences are mentioned, the main story is about the successes of the protagonist, Julia Haart, once she exits ultra-Orthodoxy.

The journey Haart and her family take from religiosity to secularism over the show's nine episodes is key to Haart's professional and personal achievements. The secular and liberal world, characterized as a place of creation of a new set of values, is portrayed as a path for emancipation.

The transition or the "fight out of the community," as expressed in the show, is presented as what has enabled the protagonist to build her religiously and sexually diverse and inclusive family. These values would have been inconsistent with a strict interpretation of Halakha.

This standpoint is also advanced to understand Haart's success as a CEO and co-owner of a fashion company. After following tziniut — Jewish codes of modesty — for most of her life, she becomes highly involved in the creation of secular women's clothing, from lingerie to footwear. This avenue out of Orthodox modesty norms, lived as a restrictive rule by Haart, is mainly shown by the creation and presentation of clothes uncovering the body. As Haart says in the show, "every little crop-top, every mini-skirt" is an "emblem of freedom."

In contrast, several productions made outside of the North American mainstream media by women exiters such as Malky Goldman, Pearl Gluck, and Melissa Weisz have told more nuanced stories about their former community in short films and plays.

These productions, however, do not draw large audiences.

Since 2018, we have also been interviewing ultra-Orthodox women in Montreal and New York about their use of social media, in particular Instagram and TikTok. Because religious authority restricts and filters the access to the internet and social media, their presence on these platforms is still controversial within the community.

If they are active on social media, it is usually to promote their businesses. Sometimes they are engaging in criticism of ultra-Orthodoxy to transform it from within, on issues such as divorce, equal pay, birth control and modesty. The debates and discussions are often kept private and restricted to women.

While these women previously did not engage with the public, the release of "My Unorthodox Life," with its focus on prosperity, drove them toward voicing their own successes.

Since mid-July 2021, when "My Unorthodox Life" premiered, women began posting under the hashtag #MyOrthodoxLife — a snub to Netflix's #MyUnorthodoxLife. The goal was to reach a broad audience and oppose negative representations by highlighting their financial prosperity and fulfilling religious life.

Many of the posts feature stories of women who are professionally accomplished and educated, contradicting the Netflix show's perspective that success and religiosity are an oxymoron. To do so, they published numerous online messages exposing their religious life of following Orthodox Judaism precepts while also highlighting their careers.

The primary objective of the movement is to reject the too simplistic representation provided by the reality TV shows and allow women to expose the richness of their lives through their own lens.

The activist Rifka Wein Harris reflected the opinions of many other Orthodox and ultra-Orthodox women when she stated that Haart's story was deceptive and diminishes their success stories.

For many of the women, being religious and respecting Jewish laws are an essential part of their identity, guiding them through different aspects of their lives.

In response to this social media campaign, Haart told The New York Times: "My issues and the ways that I was treated have nothing to do with Judaism. Judaism is about values and community and loving, kindness and beautiful things. I feel very proud to be a Jew."

Her statement appears to be an attempt to distinguish Judaism and, implicitly, Orthodox Judaism from what she characterized as "fundamentalism" in the show. However, several women engaged in the movement are coming from the same community as the one Haart labeled as "fundamentalist."

Shaking up religious and secular media

By revealing their faces and voices to the general public, these women contradict their invisibility in ultra-Orthodox media, implicitly defying religious authority. In upcoming publications, including a book to be published by the New York University Press, we document these women's online activism and its disruption of religious norms.

Not all women disagree with Haart's portrayal of ultra-Orthodoxy. Some seized on #MyOrthodoxLife as an opportunity to pursue and air internal criticism. Adina Sash, a prominent Jewish activist and influencer, supported the show as a depiction of Haart's individual journey and the ultra-Orthodoxy's need for change. The Orthodox podcaster Franciska Kosman used the show as a springboard to discuss the challenges women face in the Orthodox world, as well as how the faith's presence in secular media could improve.

We argue that the #MyOrthodoxLife movement resonates with what anthropologist Ayala Fader has identified as "a crisis of authority" occurring within ultra-Orthodoxy: the increased defiance against religious authority.

But this criticism of religious authority has gone beyond those questioning the faith and exiters that scholars have documented. It has become more present among observant ultra-Orthodox Jews and other advocates of religious beliefs and practices.

"My Unorthodox Life" — love it or hate it — eventually surpassed its one story of a Jewish woman's religious life. It led to unexpected responses creating an alternative space for public and nuanced discussions about Orthodoxy, ultra-Orthodoxy and gender.