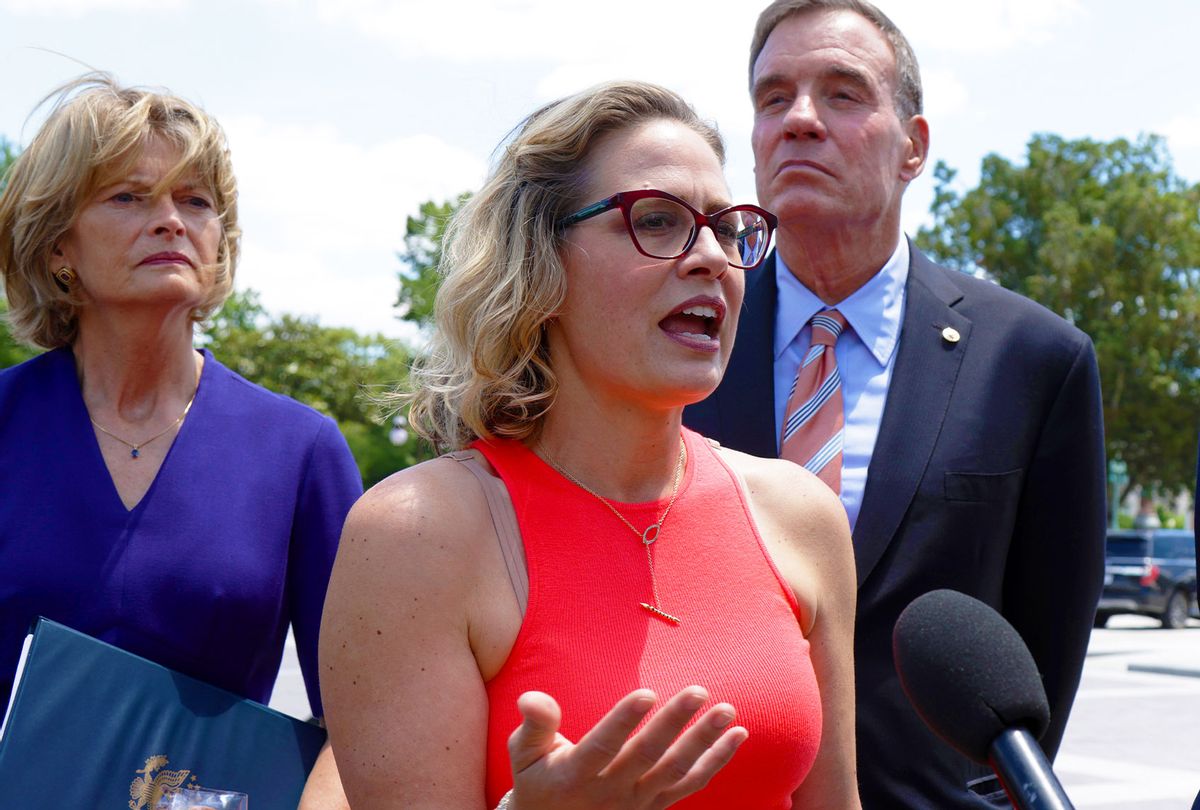 Sen. Kyrsten Sinema (D-AZ)speaking to members of the press as they arrive at the U.S. Capitol after a meeting with President Joe Biden at the White House on June 24, 2021 in Washington, DC. (Alex Wong/Getty Images)
--

Throwing a wrench in the Democrats' agenda to make life-saving drugs more affordable for millions of Americans, Politico reports that Sinema has told the White House she does not support a provision of the reconciliation bill currently being debated in the House of Representatives that would allow Medicare to negotiate prices for prescription drugs. While running for office in 2018, however, Sinema expressed clear support for lowering prescription drug prices.

"We need to make health care more affordable, lower prescription drug prices, and fix the problems in the system – not go back to letting insurance companies call all the shots," posted Sinema.

As Kaiser Health News notes, Sinema has since become "a leading recipient of pharma campaign cash," collecting $121,000 in campaign contributions from the pharmaceutical industry from 2019 to 2020.

Over in the House, Peters was joined by centrists Kathleen Rice, D-N.Y., and Kurt Schrader, D-Ore., all of whom voted "no" during a three-day markup of the bill by the House Energy and Commerce Committee, according to Politico. The bill consequently saw a 29-29 tie, preventing it from passing out of committee.

People familiar with the matter told Politico that House Speaker Nancy Pelosi, D-Calif., had spent days convincing the moderates to back down. The committee's, Rep. Frank Pallone, D-N.J., also made multiple public pleas to the coalition.

The provision is estimated to bear a windfall for the average drug consumer, saving them $700 billion over a decade – a sum that would shore up other elements of the healthcare system, like Obamacare and Medicare, per The Los Angeles Times.

Back in July, Salon reported on Peters' apparent flip-flop on H.R. 3, a Democratic-backed House bill aimed at radically reducing the price of high-cost drugs. Peters supported the measure in 2019. But in the years following, he received hundreds of thousands in campaign contributions from Big Pharma. Later he told Roll Call that the bill was a bad idea, saying that it would "dry up all the private investment that does that research."

Despite the intra-party opposition, Democrats have signaled that they will stand their ground on the drug pricing provision now that it's being tucked into Biden's infrastructure plan. Pelosi spokesperson Henry Connelly told Politico that the policy "will remain a cornerstone of the Build Back Better Act as work continues between the House, Senate and White House on the final bill."

Sen. Bernie Sanders, I-Vt., long a crusader against Big Pharma, called the industry "the most powerful industry on Capitol Hill."

"The pharmaceutical industry has spent over $4.5 billion on lobbying and campaign contributions over the past 20 years and has hired some 1,200 lobbyists to get Congress to do its bidding," Sanders tweeted on Wednesday. "Now is the time for Congress to show courage and stand up to the greed of the pharmaceutical industry. The American people will not accept surrender."

On Wednesday, Democrats launched an alternative effort to ram the bill through the legislature, Politico reported, passing identical language on drug pricing through the House and Ways Committee with a 24-19 party line vote. Still, the bill is sure to face an uphill battle in being greenlit by the House and Senate.

Peters has said that the measure will not move forward unless the party finds a compromise. "I'll be around all week and happy to talk to any senators who want to finalize something so that we can get done before next week," he told The Los Angeles Times. "Enough of us have expressed concern that we should be working on a different course. I want to be constructive."

The drug lobby has by and large backed the centrist's offensive, citing the apparent need to balance innovation with affordability. However, as Salon noted back in July, many drug price advocates have argued that this concern may be overblown.