With the 9/11 anniversary behind us, can America wake up from its 20-year nightmare?

After 20 dreadful years of war, the American people are ready for a new path. We must force our leaders to take it 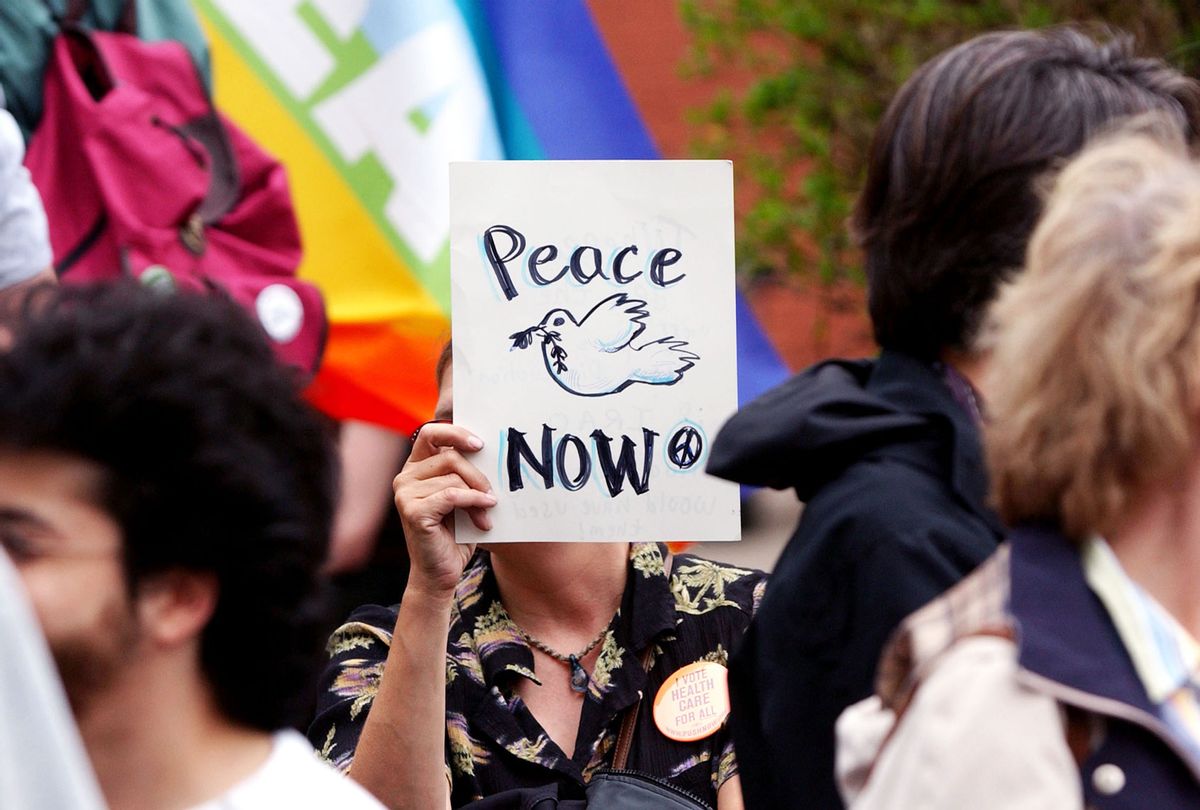 Looking back on it now, the 1990s was an age of innocence for America. The Cold War was over and our leaders promised us a "peace dividend." There was no TSA to make us take off our shoes at airports. (How many bombs have they found in those billions of shoes?) The government could not legally tap a U.S. phone or read private emails without a warrant from a judge. And the national debt was only $5 trillion — compared with more than $28 trillion today.

We have been told that the criminal attacks of Sept. 11, 2001 — whose terrible anniversary was observed last week — "changed everything." But what really changed everything was the U.S. government's disastrous response to them.

That response was not preordained or inevitable, but the result of decisions and choices made by politicians, bureaucrats and generals who fueled and exploited our fears, unleashed wars of reprehensible vengeance and built a secretive security state, all thinly disguised behind Orwellian myths of American greatness.

Most Americans believe in democracy and many regard the United States as a democratic country. But the U.S. response to 9/11 laid bare the extent to which American leaders are willing to manipulate the public into accepting illegal wars, torture, the Guantánamo gulag and sweeping civil rights abuses — all of which have undermined the very meaning of democracy.

Former Nuremberg prosecutor Ben Ferencz said in a 2011 speech that "a democracy can only work if its people are being told the truth." But America's leaders exploited the public's fears in the wake of 9/11 to justify wars that have killed and maimed millions of people who had nothing to do with those crimes. Ferencz compared this to the actions of the German leaders he prosecuted at Nuremberg, who also justified their invasions of other countries as "preemptive first strikes."

"You cannot run a country as Hitler did, feeding them a pack of lies to frighten them that they're being threatened, so it's justified to kill people you don't even know," Ferencz continued. "It's not logical, it's not decent, it's not moral, and it's not helpful. When an unmanned bomber from a secret American airfield fires rockets into a little Pakistani or Afghan village and thereby kills or maims unknown numbers of innocent people, what is the effect of that? Every victim will hate America forever and will be willing to die killing as many Americans as possible. Where there is no court of justice, wild vengeance is the alternative."

Even the former commander of U.S. forces in Afghanistan, Gen. Stanley McChrystal, talked about "insurgent math," conjecturing that for every innocent person killed, the U.S. created 10 new enemies. And thus the so-called Global War on Terror fueled a global explosion of terrorism and armed resistance that will never end — unless and until the United States ends the state terrorism that provokes and fuels it.

By opportunistically exploiting 9/11 to attack countries that had nothing to do with it, like Iraq, Somalia, Libya, Syria and Yemen, the United States vastly expanded the destructive strategy it used in the 1980s to destabilize Afghanistan, which spawned the Taliban and al-Qaida in the first place.

In Libya and Syria, only 10 years after 9/11, U.S. leaders betrayed every American who lost a loved one on Sept. 11 by recruiting and arming al-Qaida-led militants to overthrow two of the most secular governments in the Middle East, plunging both countries into years of intractable violence and fueling radicalization throughout the region.

The U.S. response to 9/11 was corrupted by a toxic soup of revenge, imperialist ambitions, war profiteering, systematic brainwashing and sheer stupidity. The only Republican senator who voted against the war on Iraq, Lincoln Chafee, later wrote, "Helping a rogue president start an unnecessary war should be a career-ending lapse of judgment."

But it wasn't. Very few of the 263 Republicans or the 110 Democrats who voted for the Iraq war in 2002 paid any political price for their complicity in international aggression, which the judges at Nuremberg explicitly called "the supreme international crime." One of them now sits at the apex of power in the White House.

Donald Trump and Joe Biden's withdrawal and implicit acceptance of the U.S. defeat in Afghanistan could serve as an important step toward ending the violence and chaos their predecessors unleashed after the 9/11 attacks. But the current debate over next year's military budget makes clear that our deluded leaders are still dodging the obvious lessons of 20 years of war.

Barbara Lee, the only member of Congress with the wisdom and courage to vote against Congress' war resolution in 2001, has introduced a bill to cut U.S. military spending by almost half: $350 billion per year. With the miserable failure in Afghanistan — a war that will end up costing every U.S. citizen $20,000 — one would think that Lee's proposal would elicit tremendous support. But the White House, the Pentagon and the Armed Services Committees in both the House and Senate are instead falling over each other to shovel even more money into the bottomless pit of the military budget.

Politicians' votes on questions of war, peace and military spending are the most reliable test of their commitment to progressive values and the well-being of their constituents. You cannot call yourself a progressive or a champion of working people if you vote to appropriate more money for weapons and war than for health care, education, green jobs and fighting poverty.

These 20 years of war have revealed to Americans and the world that modern weapons and formidable military forces can only accomplish two things: They can kill and maim people, and they can destroy homes, infrastructure and entire cities. American promises to rebuild bombed-out cities and "remake" countries it has destroyed have proven worthless, as Biden has acknowledged.

Both Iraq and Afghanistan are turning primarily to China for the help they need to start rebuilding and developing economically from the ruin and devastation left by America and its allies. America destroys, China builds. The contrast could not be more stark or self-evident. No amount of Western propaganda can hide what the whole world can see.

But the different paths chosen by U.S. and Chinese leaders are not predestined, and despite the intellectual and moral bankruptcy of the U.S. corporate media, the American public has always been wiser and more committed to cooperative diplomacy than America's political and executive class. It has been well-documented that many of the endless crises in U.S. foreign policy could have been avoided if America's leaders had just listened to the public.

The perennial handicap that has dogged America's diplomacy since World War II is precisely our investment in weapons and military forces, including nuclear weapons that threaten our very existence. It is trite but true to say that when the only tool you have is a hammer, every problem looks like a nail.

Other countries don't have the option of deploying overwhelming military force to confront international problems, so they have had to be smarter and more nimble in their diplomacy, and more prudent and selective in their more limited uses of military force.

The rote declarations of U.S. leaders that "all options are on the table" are a euphemism for precisely the "threat or use of force" that the UN Charter explicitly prohibits, and they stymie the U.S. development of expertise in nonviolent forms of conflict resolution. The bumbling and bombast of America's leaders in international arenas stand in sharp contrast to the skillful diplomacy and clear language we often hear from top Russian, Chinese and Iranian diplomats, even when they are speaking in English, their second or third language.

By contrast, U.S. leaders rely on threats, coups, sanctions and war to project power around the world. They promise Americans that these coercive methods will maintain American "leadership" or dominance indefinitely into the future, as if that were America's rightful place in the world, to be sitting atop the globe like a cowboy on a bucking bronco.

A "New American Century" and "Pax Americana" are Orwellian versions of Hitler's "Thousand-Year Reich," but are no more realistic. No empire has lasted forever, and there is historical evidence that even the most successful empires have a lifespan of no more than 250 years, by which time their rulers have enjoyed so much wealth and power that decadence and decline inevitably set in. This describes the United States today.

America's economic dominance is waning. Its once productive economy has been gutted and financialized, and most countries in the world now do more trade with China and/or the European Union than with the United States. Where America's military once kicked open doors for American capital to "follow the flag" and open up new markets, today's U.S. war machine is just a bull in the global china shop, wielding purely destructive power.

But we are not condemned to passively follow the suicidal path of militarism and hostility. Biden's withdrawal from Afghanistan could be a down payment on a transition to a more peaceful post-imperial economy — if the American public starts to actively demand peace, diplomacy and disarmament, and finds ways to make its voices heard.

Our only hope for the future is to abandon the futile quest for hegemony and instead commit to peace, cooperative diplomacy, international law and disarmament. After 20 years of war and militarism that have only left the world a more dangerous place and accelerated America's decline, we must choose the path of peace.