Adam Laxalt, the “Nevada version of Rudy Giuliani,” vows he'll sue to “tighten up the election” before anyone votes 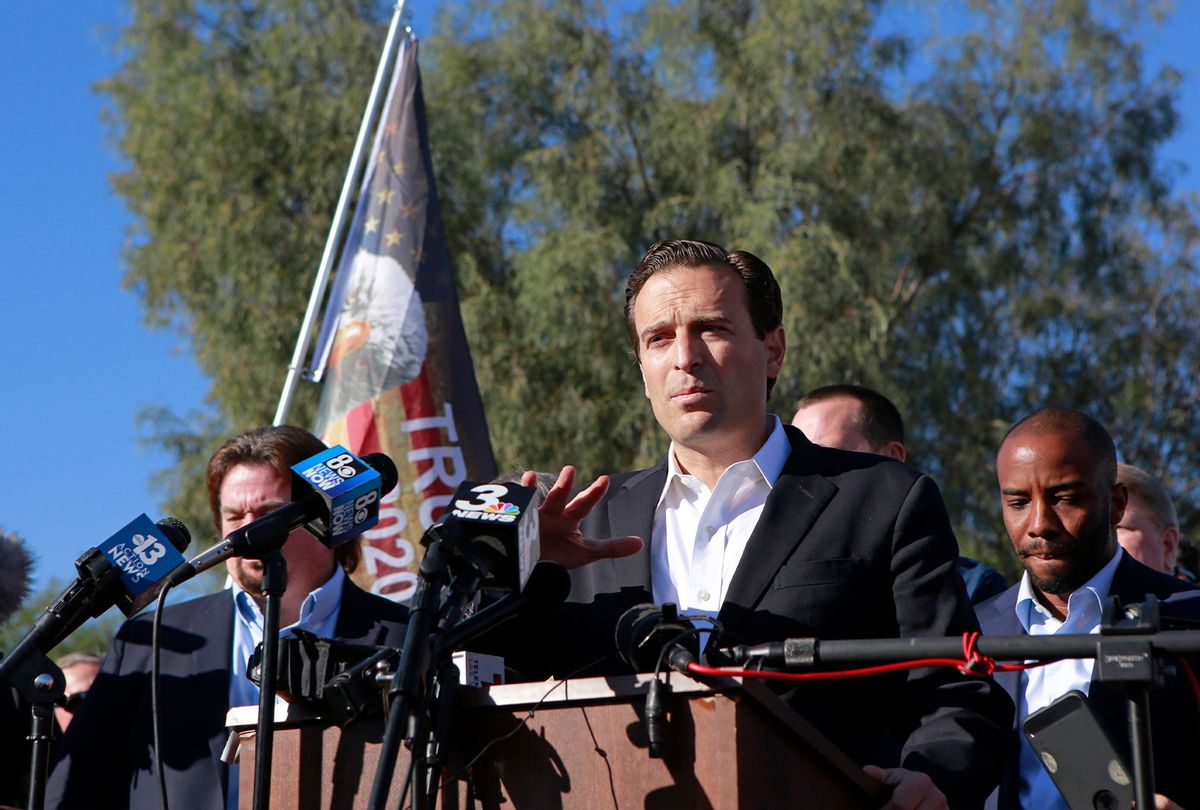 Nevada Senate candidate Adam Laxalt, a Republican with a well-known name in the Silver State, is already stoking fears of voter fraud and vowing to file lawsuits to "try to tighten up the election" — 14 months before any actual votes are cast.

Republican candidates around the country have ripped a page from Donald Trump's playbook, launching spurious claims of fraud about elections that haven't happened yet, in an apparent effort to blame potential defeats on unspecified and evidence-free claims of "irregularities." California Republican Larry Elder, who hoped to be elected governor after the recent recall election targeting Democratic Gov. Gavin Newsom, launched a website claiming voter fraud days before votes were even counted. (In the event, the vote against the recall was so overwhelming Elder has stopped talking about it.) But Laxalt, who was endorsed by Trump after filing multiple lawsuits contesting Joe Biden's narrow 2020 victory in Nevada, is breaking new ground by making such claims more than a year before a single vote is cast.

"With me at the top of the ticket, we're going to be able to get everybody at the table and come up with a full plan, do our best to try to secure this election, get as many observers as we can, and file lawsuits early, if there are lawsuits we can file to try to tighten up the election," Laxalt told radio host Wayne Allyn Root in an interview last month after Root claimed that "Trump won Nevada" and said the election had been "stolen." The comments were first flagged by Jon Ralston, editor of the Nevada Independent, and later reported by the Associated Press.

The comments set off alarm among some Nevada Republicans, according to Ralston, who drew a comparison to failed 2010 U.S. Senate candidate Sharron Angle. Angle held an early polling lead over then-incumbent Sen. Harry Reid, a Democrat, until she veered sharply to the right, alienating key conservatives in the state.

"She went on with friendly interviewers, got comfy and said damaging things," Ralston said on Twitter. "Laxalt will only do Newsmax, OAN, Joecks TV and will keep making mistakes. That's why GOPers here are worried."

Laxalt is the grandson of Paul Laxalt, a Nevada Republican legend who served both as governor and in the U.S. Senate. His biological father, as he revealed less than 10 years ago, was former Sen. Pete Domenici, a New Mexico Republican and close ally of Ronald Reagan, who had an extramarital relationship with Laxalt's mother when she worked on Capitol Hill. Laxalt served one term as Nevada attorney general and ran for governor in 2018, losing to Democrat Steve Sisolak despite Trump's endorsement. He later served as co-chair of Trump's 2020 campaign.

"Adam Laxalt led Trump's efforts to overturn the 2020 election, and now he's running the same Big Lie playbook for his 2022 Senate campaign," said Andy Orellana, a spokesperson for Nevada Democratic Victory, which is working to re-elect Sen. Catherine Cortez Masto, who would be Laxalt's opponent in the 2022 general election. "He knows he can't win on the issues, so Laxalt is pushing frivolous preemptive lawsuits in an effort to limit Nevadans' voting rights and potentially overturn the election when he loses."

Laxalt led multiple lawsuits on behalf of Trump's campaign, leading the Las Vegas Sun editorial board to dub him the "Nevada version of Rudy Giuliani."

Laxalt insisted in the interview with Root that the problem with those lawsuits was not that the campaign's failed to produce any evidence of fraud but only that that the suits were not filed in time.

"There's no question that, unfortunately, a lot of the lawsuits and a lot of the attention spent on Election Day operations just came too late," he said.

In fact, Laxalt filed his first failed challenge of the 2020 vote before Election Day, seeking to stop the count of mail-in ballots in Clark County, which includes Las Vegas and is home to three-quarters of Nevada's population. After Trump's defeat, Laxalt repeatedly pushed conspiracy theories about widespread voter fraud, without provide any actual evidence.

Laxalt also pushed a claim that more than 3,000 non-residents had voted by mail in the 2020 Nevada election. Trump allies filed a lawsuit over the claim — but then dropped them after it became clear that many of the ballots Laxalt described were linked to military post office boxes overseas or locations around the country where military personnel are stationed, suggesting they were legally cast by troops and their family members.

Laxalt filed a post-election lawsuit alleging widespread voting irregularities and asking a court to overturn Biden's victory and declare Trump the winner. A judge in Carson City, the state capital, rejected the challenge, writing that the campaign's evidence had "little to no value" and "did not prove under any standard of proof that any illegal votes were cast and counted, or legal votes were not counted at all, for any other improper or illegal reason." Trump's campaign appealed the decision, arguing that the court did not take into account "expert" testimony provided by the campaign. The Nevada Supreme Court rejected that challenge, writing that the campaign failed to identify any "unsupported factual findings" in the earlier ruling.

"Last time Laxalt (and other anti-voter allies) pushed lies like this, they lost. Again and again," the States United Democracy Center, a nonpartisan group that supports fair and secure elections, said on Twitter in response to Laxalt's latest lawsuit threat. "The fight is so far from over. Lies about election integrity are spreading past the 2020 presidential election."

In fact, Biden won Nevada by more than 33,000 votes — making Laxalt's unsupported claims about non-resident voting irrelevant — and the results were certified by the state Supreme Court. Republican Secretary of State Barbara Cegavske launched an investigation into voter fraud allegations that found no evidence of widespread fraud or irregularities.

"While the NVGOP raises policy concerns about the integrity of mail-in voting, automatic voter registration, and same-day voter registration, these concerns do not amount to evidentiary support for the contention that the 2020 general election was plagued by widespread voter fraud," she wrote in a letter to the state Republican Party in April — after the party censured her for refusing to support the false claims of election fraud that have seemingly become GOP doctrine.

But the absence of evidence has apparently done little to assuage Laxalt as the state's Republican Party continues to raise hundreds of millions of dollars from its baseless fraud claims. Laxalt's campaign did not respond to questions from Salon.

In a statement to the AP, Laxalt declined to specify what kind of lawsuits he believes woiuld "tighten up the election" or to say whether he would accept the election results if he loses. But criticized the Democratic-led state legislature for passing a bill to send mail-in ballots to every registered voter.

"Without a single Republican vote, Democrats radically changed the election rules in the final stretch of last year's campaign and many voters lost confidence in the system as a result,"  he told the outlet. "Their partisan transformation of Nevada's system handed election officials an untested process that generated over 750,000 mail-in votes, unclean voter rolls, loose ballots and virtually no signature verification. Nevadans have a right to more transparency and voters deserve confidence in the accuracy of election results, and I will proudly fight for them."

Asked about the former attorney general's argument, a spokesperson for Cegavske told Salon that the secretary of state is "not commenting on Mr. Laxalt's concerns beyond what she has been saying all along – that there was no evidence of widespread voter fraud in the 2020 election."

Laxalt later bragged on Twitter that his promise to attack the 2022 election in advance "seems to be triggering the media" after it was reported by Nevada outlets. "I stand by what I said on Wayne Allen Root's [sic] show," he said, insisting that he simply wants "free" and "secure" elections.

"In fact, Laxalt is the one threatening to undermine secure and fair elections," argued Washington Post columnist Greg Sargent. "Indeed, as this demonstrates, for Trumpist politicians, the refusal to commit to respecting legitimate election losses is now a badge of honor."

Laxalt expects to face off against Cortez Masto next November, though he still has to get past a Republican primary that is nine months away. Democrats have accused him of preemptively trying to undermine democracy.

"Laxalt knows he can't defend his record of pushing Trump's interests and those of his special interest donors over hardworking Nevadans, so 14 months before the election he's already plotting to revive the Trump playbook — threatening self-serving lawsuits in an effort to make it harder for Nevadans to vote," Jazmin Vargas, a spokesperson for the Democratic Senatorial Campaign Committee, said in a statement. "Nevadans see right through Laxalt's corrupt and dishonest tactics and will reject him again in 2022."