Anti-masker attempted to run Michigan health official off the road at 70 mph: report 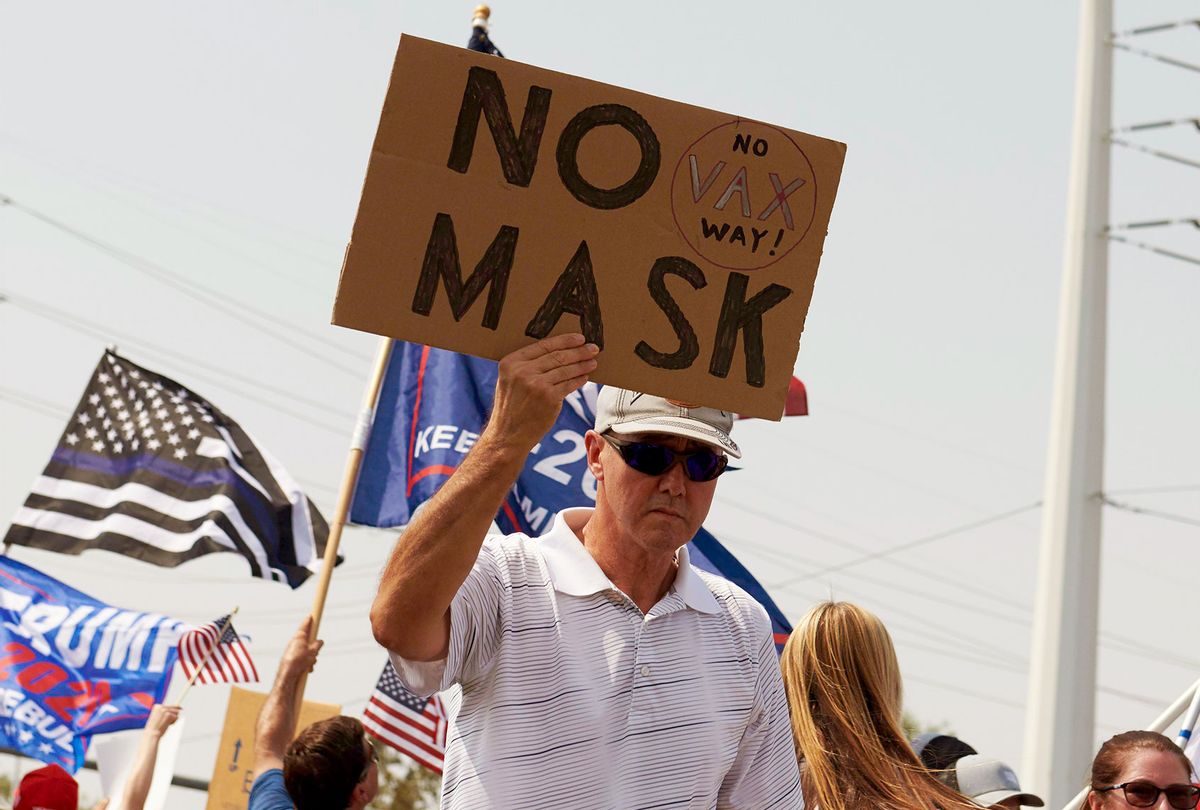 Protesters rally against a mask mandate, many showing support for US President Donald Trump, in Las Vegas, Nevada on August 22, 2020. (BRIDGET BENNETT/AFP via Getty Images)
--

A Michigan health official says an anti-mask activist tried to run him off the road at more than 70 mph after he announced a school mask mandate last month.

The Michigan Advance obtained an email sent by Kent County Health Department Director Dr. Adam London to county commissioners detailing the incident, which occurred shortly after London announced that masks would be required in pre-school through sixth grade, since children under 12 aren't eligible for COVID-19 vaccines.

"I had a woman try to run me off the road at 70+ miles per hour…twice, on Friday night," London wrote in his Aug. 22 email. "I think we have all seen the aggression and violence displayed at meetings across the nation during the past week."

London also recounted some of the other abuse and violent threats he's received from anti-maskers — "accusing [him] of being a deep state agent of liberal-progressive socialist powers that are working to undo the America they love" and calling him a "child-abusing monster."

"Last week, I had a person yell out to me, "Hey motherf*cker, I hope someone abuses your kids and forces you to watch,'" London wrote.

In response to the threats of violence and the "attempted vehicular assault" against London, Democratic commissioners issued a statement affirming their support for the health director, but Republicans on the board declined to sign it.

"At an Aug. 26 Kent County Board of Commissioners meeting, a large and often raucous crowd spewed harsh and aggressive words for London, who had to attend the meeting virtually due to concerns for his physical safety," the Michigan Advance reported, adding that many have called for his firing or resignation.

In his email to commissioners, London pleaded for help and compared anti-maskers to those who dismiss the Capitol insurrection as "a peaceful patriotic protest," or the alleged plot to kidnap Democratic Gov. Gretchen Whitmer as "just guys joking around."

"There is nothing to be gained by entertaining such people with dialogue," London wrote, adding that he will not "needlessly expose" himself or his family to the "brute mob hatred" of people who try to force their views on others through intimidation and threats of violence.

"I think it is a grave mistake to unnecessarily give them targets and platforms," he wrote. "There is a sickness in America far more insidious than COVID. You are more empowered to fight this disease than I am."

"I will not participate in witch trials in which the science I've presented, and the opinions of legitimate experts, is reduced to the same stage as people living in echo-chambers of junk science, salespeople, and Youtube videos," he wrote. "If you want to fire me, or censure me, or pass a resolution condemning me, by all means please proceed ... But first, let me share my prayer with you: I pray that people more powerful than me, Democrats and Republicans, rise up with one voice and say, 'we will not tolerate or provide quarter for this nonsense in our part of America.'"

London described himself in the email as a Christian who views his job as "an expression of faith."

"Others are calling me a traitor to our nation and liberty who must be stopped at all costs," London wrote. "Really? I'm the grandson of two WWII heroes, the son and step-son of men who served during Vietnam, and the brother of a soldier who served in Afghanistan. We proudly wave the flag at my house and in my office. Faith, Family and Country."