As the latest COVID-19 case surge winds down, predictive models say we may not see another one similar to it 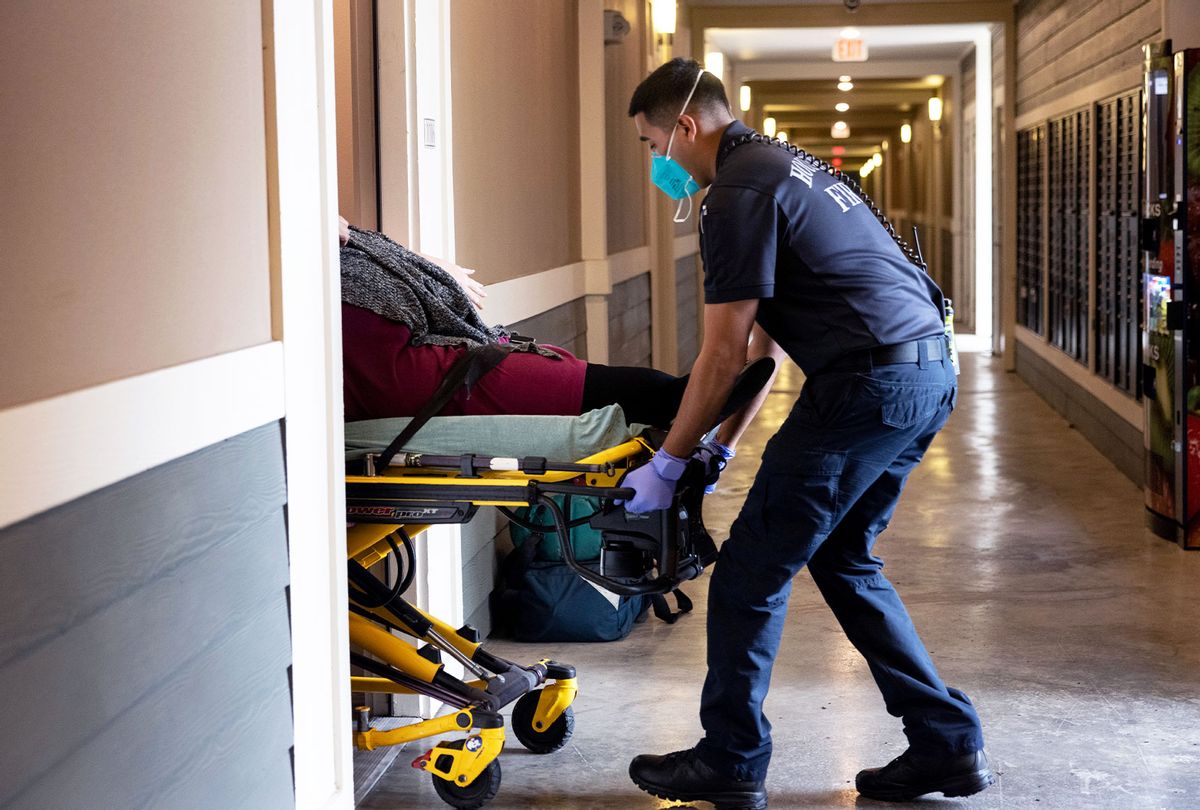 Houston Fire Department paramedics transport a woman with breathing difficulties to a hospital on September 14, 2021 in Houston, Texas. Texas' Harris County continues to see large number of Covid-19 hospitalizations due to the Delta variant surge in the state. (John Moore/Getty Images)
--

Has the latest COVID-19 surge, fueled by the ultra-infectious delta variant, finally peaked in the United States?

On Wednesday, the COVID-19 Scenario Modeling Hub, a group of researchers who have been studying and following the trajectory of the pandemic, announced a new prediction stating that the worst of the delta surge is likely behind us. Through combining nine different mathematical models, the researchers forecast that cases will finally start to fall again throughout the next few months and that the U.S. will avoid another winter surge like last year.

"Any of us who have been following this closely, given what happened with delta, are going to be really cautious about too much optimism," Justin Lessler at the University of North Carolina, who helps run the hub, told NPR. "But I do think that the trajectory is towards improvement for most of the country."

Indeed, the U.S. is already starting to see this happen in real-time. As a whole, COVID-19 cases and hospitalizations are declining (once again) across the country and even the world. According to the World Health Organization's most recent report, the number of new COVID-19 cases fell to 3.6 million new cases globally, down from 4 million new infections the previous week. In parts of the U.S. where delta hit the hardest, like Florida and Texas, cases and hospitalizations have declined over the last week, too. Of course, this trend doesn't track everywhere across the country. In Ohio, some hospitals are at or reaching peak capacity, as the delta variant just now takes hold in various communities.

"I think in general, with delta, we're peaking as a country, but there are going to be some states where they're on a different timescale and those states are less populous so they probably won't wouldn't affect the overall U.S. numbers," said Dr. Amesh Adalja, a senior scholar at the Johns Hopkins Center. "But it may get difficult in some of those states if there are high-risk individuals getting infected as we've seen, for example in Idaho, where they're worried about the ability to care for patients."

The country, Adalja emphasized, is pretty "heterogeneous" and even if U.S. numbers as a whole fall, that doesn't mean the delta surge is over for everyone. Still, a trend of cases and hospitalizations falling is a positive one.

For Americans who recall over a year of surges in case numbers followed by declines followed by another inevitable surge, this prediction might induce deja vu. The delta variant surge has been dubbed the fourth officially COVID-19 wave since the pandemic began, and it certainly threw the pandemic on a different track. Unlike previous surges from 2020 and early 2021, vaccines were widely available for most people who were eligible during delta variant's rise.

Now, as this wave crests, more people who previously were ineligible for vaccines will be able to obtain vaccinations. The two-shot Pfizer vaccine is expected to be approved in the coming weeks for children between the ages of five and 11; previously, the youngest vaccine-eligible age was 12.

While there have not been official lockdowns during the delta surge in the U.S. (unlike previous surges), some parts of the country tightened pandemic restrictions because of the delta variant. These generally included rules about wearing masks indoors, regardless of vaccination status, or denying entry to businesses if patrons lacked vaccine cards. Indeed, the delta variant delayed society's timeline for returning to any semblance of normalcy.

Unlike previous surges, experts like Adalja and those at the COVID-19 Scenario Modeling Hub do not believe another "surge" is in our future.

"I think you have to also define what it means by surge — are we going to see an acceleration of cases when it gets colder, less sunny, less humid and people have to go indoors? Yes, that's just based on the biology of the virus," Adalja said. "There will be more cases during those periods of time, but will they be deadly? That's really a function of who's getting infected and how protected the high-risk populations are."

Adalja added that after this wave, he does believe that many people will be protected by either the vaccines or natural immunity.

"I do think there's going to be a significant amount of immunity when you combine natural immunity plus vaccine induced immunity plus people who are now dead and not susceptible because they're dead," Adalja said.

Monica Gandhi, an infectious disease doctor and professor of medicine at the University of California–San Francisco, said it is likely a lot of vaccinated people have been exposed to the delta variant and don't even know it.

"The thing about delta to remember is that we are not getting away from it — it's really transmissible, and we did not lock down our society. We tried to do masks in some places, but we didn't even do capacity limits and we opened schools at the same time," Gandhi said. "So what does this mean? It means a lot of people have been exposed to delta, and for the vaccinated, many of them don't know it."

If they did, they likely had a mild breakthrough case.

If doing the same thing over and over and expecting different results is insanity, then it's reasonable for expectations to need to be managed during yet another wind-down from yet another wave. While this fall might not be as relaxed and celebratory as life felt before delta happened, when cases were falling and vaccinations rates were rising, there is room to be optimistic. But does this mean the pandemic is finally nearing an end? That is a little more difficult to answer, Gandhi said.

"No one's defined an endpoint," Gandhi said. "I have really concluded that the endpoint is when everyone qualifies for a vaccine, including children; that's when there will be a relaxation that will be when we'll stop having articles that say, in the Washington Post, 'living with an unvaccinated child is like living through a fire alarm every day.'"

Similar to how the delta variant has affected different states and cities across the country, a sense of normalcy depends on where one is located, too. Blue states like California have more pandemic restrictions, like mask mandates indoors, compared to red states like Florida that have politicians who keep refusing to implement mask mandates. The Centers for Disease Control and Prevention has a set of recommendations for when the vaccinated should wear masks indoors, which includes wearing a mask indoors in public if a person is in an area of substantial or high transmission. Unvaccinated people are expected to wear masks regardless of transmission rates inside, which is partly why local jurisdictions reverted back to universal masking. Adalja said as COVID-19 cases fall, it's possible that some local governments will ease indoor masking restrictions.

"If you're in a place where those have fallen, then the CDC recommendations would not necessarily be applicable," Adalja said. "Some states or some counties may have gone beyond the CDC recommendations, but I think most of them would probably phase those out if they've fallen below the CDC threshold; I think you would see those types of things, not be enforced because transmission goes down."

Certainly getting more people vaccinated is the best way to slow transmission though, but at least for now gone are the days when symptoms of a cold — even for the vaccinated — could be easily brushed off. But as Gandhi noted, how the next phase of the pandemic looks in regards to masking and gatherings is largely a "blue state question"— as many red states didn't follow CDC recommendations at all once delta hit. Regardless of politics, both Adalja and Gandhi said we are moving to a phase of the pandemic where people have to learn to live with COVID-19 as an endemic disease.