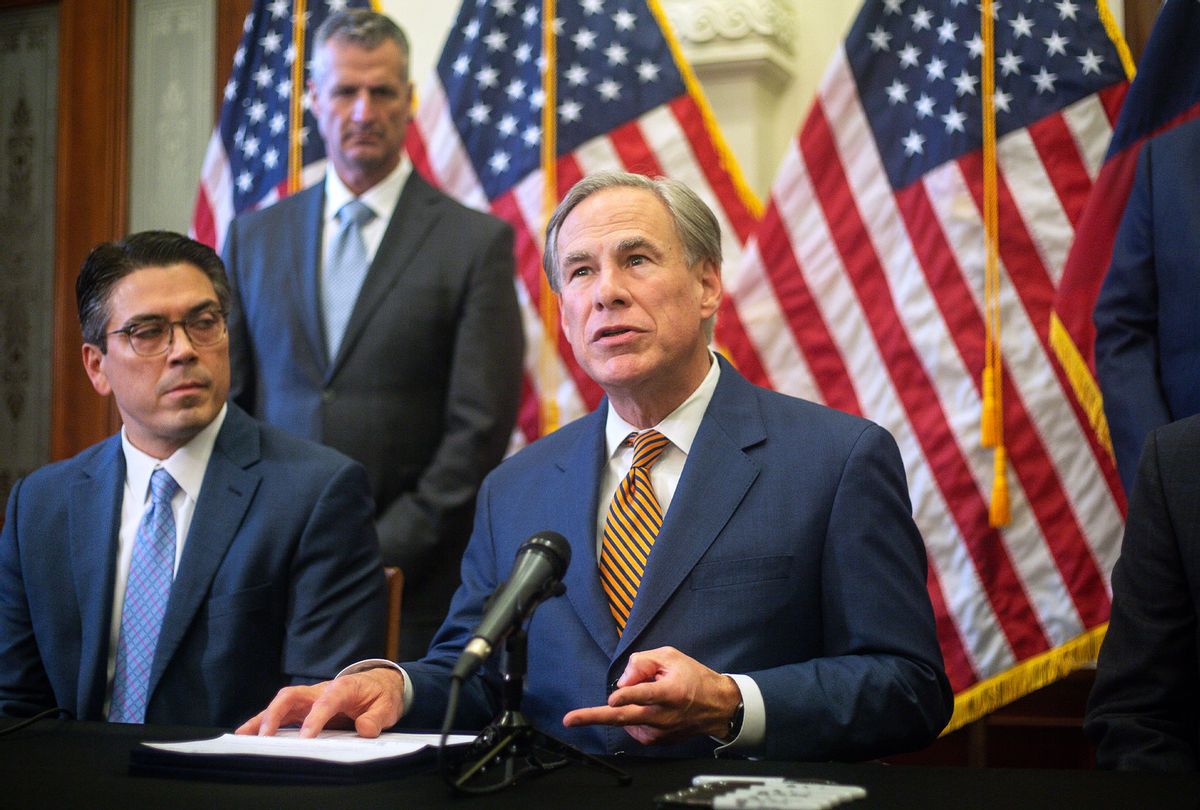 Texas Gov. Greg Abbott's administration announced a "forensic audit" of the 2020 election in four of that state's biggest counties on Thursday even as a similar effort in Arizona showed President Joe Biden winning with an even larger margin.

The Texas secretary of state's office announced the probe hours after former President Donald Trump, who has repeatedly pushed debunked lies about the election, demanded that Texas Gov. Greg Abbott add an election audit bill to the state legislature's special session. Trump won Texas comfortably, but for unclear reasons is unsatisfied with that result.

There has been no evidence of widespread fraud or irregularities in the Texas election but Trump wrote in his letter to Abbott that Texans "don't trust your election system, and they want your leadership on this issue, which is the number one thing they care about."

Hours later, the Texas secretary of state's office issued a statement announcing that it has "already begun the process in Texas' two largest Democrat counties and two largest Republican counties — Dallas, Harris, Tarrant, and Collin — for the 2020 election," calling for the legislature to fund the effort.

The office is currently led by an interim chief after former Republican Secretary of State Ruth Hughs resigned amid Republican acrimony over her office confirming that the state's election was "smooth and secure."

The statement did not say what prompted the move but Democrats said the state was clearly bending to Trump's will.

"Let me be the first to congratulate the disgraced former president, Donald Trump, on his apparently becoming the new governor of Texas," tweeted state Rep. Chris Turner, a Democrat. "Pitiful yet predictable that [Abbott] has capitulated to Trump yet again."

Trump has continued to push baseless allegations of fraud in last year's election even though his own Justice Department investigated at the time and found no evidence. Trump has called for so-called "audits" similar to the one in Arizona in other states. including Pennsylvania, Wisconsin and Georgia.

But leaked draft copies of audit results from Maricopa County, Arizona, on Thursday showed that Trump lost by a wider margin than the county previously reported. Though the draft audit report still attempts to push questions about the election process, which experts say are misleading, the document also debunked various of Trump's conspiracy theories, including "Sharpiegate" and claims that the county received tens of thousands of absentee ballots that had not been sent out. Trump insisted after the leak that the audit "uncovered significant and undeniable evidence of FRAUD" even though a spokesman for the review told reporters that "it doesn't look like it" uncovered evidence of a "massive fraud or anything."

"If Trump and his supporters can't prove it here, with a process they designed, they can't prove it anywhere," David Becker, executive director of the Center for Election Innovation and Research, told The New York Times.

Though the audit failed to show evidence of Trump's fraud and vote-switching conspiracy theories, it is expected to cost taxpayers millions after Secretary of State Katie Hobbs, a Democrat, decertified the voting machines handed over to Cyber Ninjas, the Trump-linked firm behind the audit, because election officials had no idea what the company did with them after taking them into custody.

While the Maricopa County audit was largely paid for by private donations from Trump supporters, the Texas secretary of state's office expects that the legislature will use taxpayer funds to fund its effort.

Isabel Longoria, elections administrator for Harris County, the state's largest, told the Austin American-Statesman that the audit is "another attack by officials on our communities' trust in elections."

"Our office has been focused on running fair elections with innovative, equitable approaches during an unprecedented pandemic," she said.

Texas lawmakers, who already passed a slew of new voting restrictions in response to alleged concerns about "election integrity" — almost entirely the result of fear-mongering by Trump and his allies — earlier this year passed a law empowering the secretary of state's office to audit two years worth of election results of up to four counties at a time.

Republicans in Wisconsin, where there have already been multiple audits and recounts of the results that confirmed Trump's loss, have launched an investigation into the election led by a former state Supreme Court justice who spoke at "Stop the Steal" rallies. He said this week that the probe "may include a vigorous and comprehensive audit if the facts that are discovered justify such a course of action."

Pennsylvania Republicans last week subpoenaed personal information, including driver's license numbers and Social Security numbers, of every voter in the state as part of a similar investigation. Pennsylvania Attorney General Josh Shapiro, a Democrat, filed a lawsuit seeking to block the subpoenas on Thursday, calling the request "illegal, unconstitutional, and unenforceable."

Texas Democrats say the state's "audit" is the latest example of the Republicans bowing to Trump despite no evidence to back up his allegations.

"This is all an organized effort to overturn the will of the people," Gilberto Hinojosa, chairman of the Texas Democratic Party, told the Times, "in an effort to fuel the 'Big Lie' and stroke Trump's ego."