Republicans want personal data on 7 million voters, claiming need to determine "whether or not they exist” 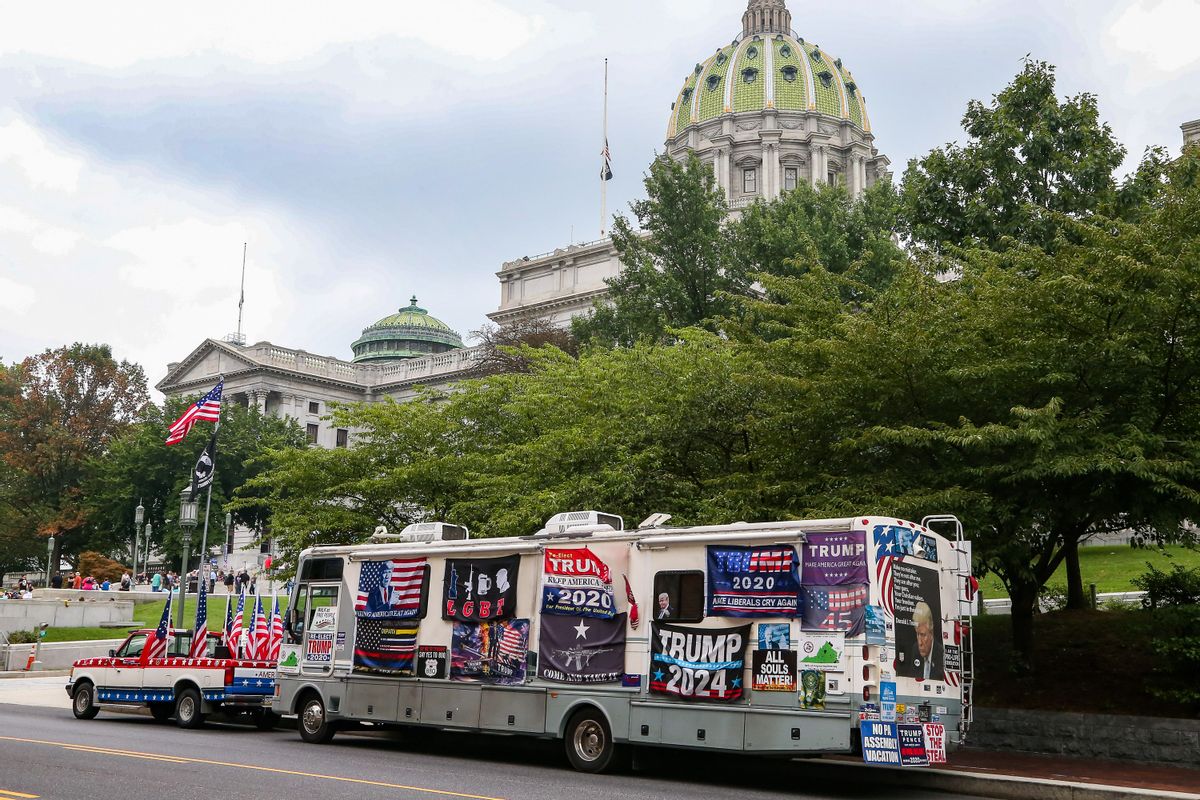 A recreational vehicle covered in pro-Trump signs seen parked near the Pennsylvania State Capitol in Harrisburg during the "Rally for Freedom" on Aug. 29. (Paul Weaver/SOPA Images/LightRocket via Getty Images)
--

Pennsylvania Republicans on Wednesday voted to subpoena personal information on every voter in the state as part of a taxpayer-funded probe into former President Donald Trump's election loss 10 months earlier.

Jake Corman, the Republican state Senate leader, disputed Trump and his allies' false claims about election fraud in Pennsylvania last year but has since buckled under pressure from the Trump wing of the party and committed to conducting a "full forensic investigation" of the 2020 election after the former president and his allies pushed for an Arizona style election "audit."

The Republican-led state Senate Intergovernmental Operations Committee moved ahead with the probe on Wednesday, voting to subpoena Democratic Gov. Tom Wolf's administration for detailed voter records including names, dates of birth, driver's license numbers, last four digits of Social Security numbers, addresses and methods of voting for every voter who participated in the November election and the May 2020 primaries.

Committee chairman Sen. Cris Dush, who traveled to Arizona to review that state's so-called audit, acknowledged during Wednesday's hearing that there have been no "proven allegations" of fraud but insisted that Republicans were responding to "questions regarding the validity of people who have voted — whether or not they exist."

"We are investigating the allegations to determine whether or not they are factual," he said.

"There have been allegations about last year's elections. I understand that," Democratic state Sen. Steve Santarsiero shot back. "They've been proven to be without merit. Why do we now need this information?"

There has been no evidence to support Trump and his allies' false fraud claims, which were roundly rejected by courts in Pennsylvania and other states.

The subpoena issued by the committee also seeks communications between election officials and other documents related to election administration.

Democrats, who have labeled the dubious probe a "fraudit," vowed to fight the subpoenas in court.

"Senate Democrats, going forward, intend to take legal action against this gross abuse of power by filing a lawsuit, challenging in the courts, and to ask the courts to declare the Senate Republicans' actions in violation of separation of power, as well as declaring that they had no authority to issue these subpoenas," state Senate Minority Leader Jay Costa told The New York Times.

Wolf called the effort a "sham" aimed at perpetuating Trump's "Big Lie" about the election by "undermining confidence in our elections by bringing an Arizona-style circus to Pennsylvania."

"Let's be very clear, this information request is merely another step to undermine democracy, confidence in our elections and to capitulate to Donald Trump's conspiracy theories about the 2020 election," he said in a statement. "It is a direct continuation of the same lies that resulted in the attack on the Capitol, and that have done so much to destabilize our political institutions over the ten months since last year's election. As even members of the Pennsylvania Republican caucus have acknowledged, this charade has to stop."

The state has already conducted two actual post-election audits that confirmed the results of the election.

"Republican lawmakers may be the only people in the country who actually want to relive 2020," Democratic Lt. Gov. John Fetterman, who is running for Pennsylvania's open U.S. Senate seat next year, said in a statement. "The election happened 10 months ago. Biden won. Get over it. Stop pissing away taxpayer money."

Republicans have vowed to defend the subpoenas in court, which could stretch the process out for months and cost taxpayers even more. Dush said he also plans to hire a contractor to run the probe but could not guarantee that the vendor won't have ties to Trump or other candidates after widespread criticism of Arizona's decision to hire Cyber Ninjas, an inexperienced out-of-state firm whose owner pushed pro-Trump election conspiracy theories on Twitter. Dush said the vendor would not have ties to former Trump lawyer Sidney Powell, who faces legal sanctions for pushing baseless lawsuits challenging election results.

Corman, who previously said he also wants to obtain voting machines and ballots for the probe, vowed to ensure that voter information would be "secure," though he provided no details on how he would ensure that. In Arizona, taxpayers will now be compelled to spend millions to replace voting machines that were decertified by the state after being handed over to Cyber Ninjas.

"We want to be very careful about this process so that we don't cause any undue consequences," Corman acknowledged to the Philadelphia Inquirer.

"That's a really bad idea to have private information floating around in a Senate caucus," Marian Schneider, an elections lawyer for the ACLU of Pennsylvania, told the New York Times. "And it's really not clear how the data is going to be used, who's going to be looking at it, who can have access, how it's going to be secured. And it's unclear to me why they even need the personally identifying information."

Pennsylvania is one of several states where Republicans are pushing Arizona-style probes. In Wisconsin, Republican lawmakers launched an audit led by former State Supreme Court Justice Michael Gableman, who ranted at a pro-Trump rally after the election that the presidency was stolen. Even so, a far-right group affiliated with former Milwaukee County Sheriff David Clarke, a staunch Trump ally, has called for a "broader audit" because they don't trust the existing one. The state has already spent taxpayer money on four recounts that have confirmed the results of the election.

The States United Democracy Center last week released a memo comparing the Wisconsin audit to the Arizona effort, warning of "unqualified and hyper-partisan actors" who make a "mockery of official election procedures and sow doubt about our democracy."

"It's clear these are bad faith efforts," former New Jersey Gov. Christine Todd Whitman, a Republican co-founder of the group, told reporters, "not fact-finding missions but rather political stunts to keep the lies of the 2020 election alive."