How the myth of 'border security' empowers American fascists

Border Patrol's job is regulating flows of people in and out of the U.S. But that job is impossible 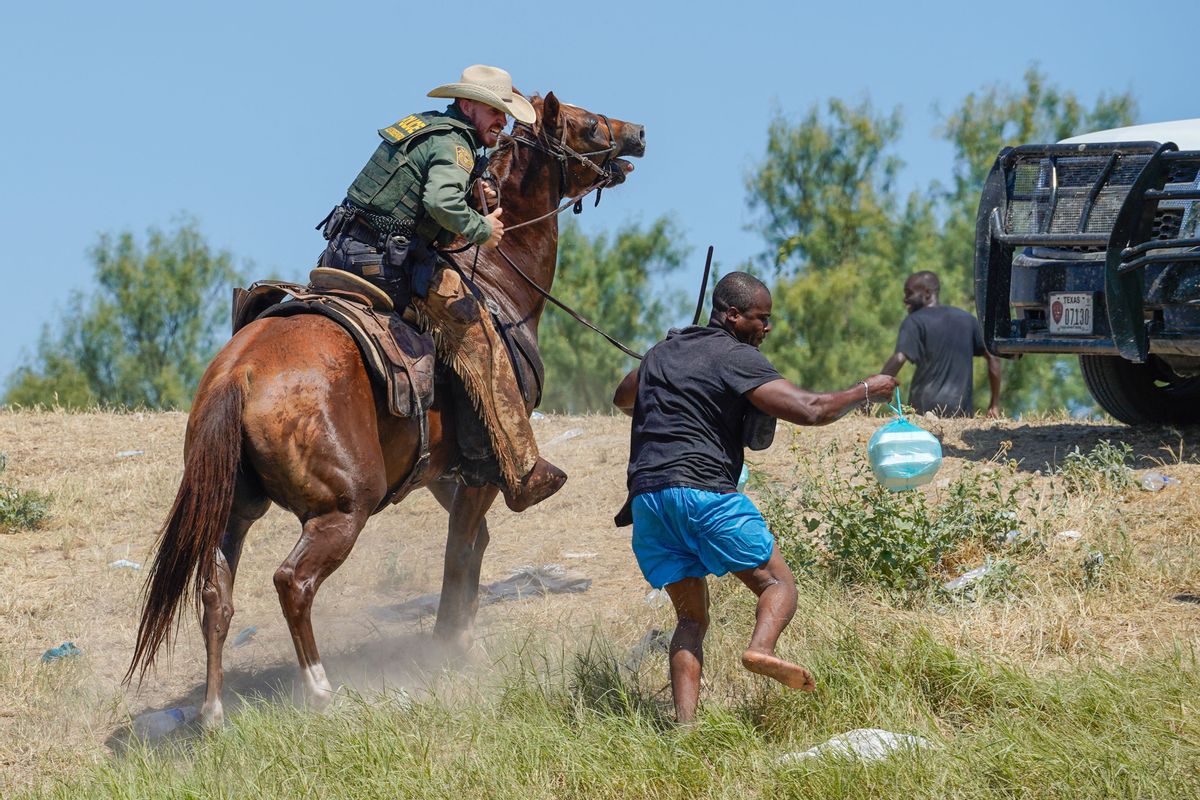 A United States Border Patrol agent on horseback uses the reins to try and stop a Haitian migrant from entering an encampment on the banks of the Rio Grande near the Acuna Del Rio International Bridge in Del Rio, Texas on September 19, 2021. (PAUL RATJE/AFP via Getty Images)
--

The week began with photographs of white men on horseback swinging reins at Black Haitians at the southern border. The El Paso Times captured images of mounted Border Patrol agents trying to force migrants, carrying food and supplies, back over the Rio Grande into Mexico. This week ended with Joe Biden expressing outrage. "I promise you those people will pay," the president told reporters this morning. "They will be investigated. There will be consequences."

That's good, but the larger problem is that the president keeps accepting the premise of "border security" — an ideologically conservative premise. The first step to reforming the government's attitude and hence policy toward the border is to stop accepting the premise as if the GOP means it. They don't. They don't care about "border security." What they care about is having a tool with which to bully Democratic presidents into doing what they want them to do.

That strategy has been wildly successful. The Democrats have been on their heels since at least the Clinton administration. According to the Editorial Board's Elizabeth F. Cohen, professor of political science at Syracuse University's Maxwell School, so-called border security "is a familiar posture, whether or not immigration reform is on the table. Bill Clinton presided over the creation of a legal architecture leading to mass immigrant incarceration. Barack Obama pushed the limits of the deportation infrastructure that was built in the interim, deporting more people from this country than any president to this day."

Biden has proven progressive in ways a lot of progressives have been delighted to discover. When it comes to immigration and border policy, though, he's in the vein of his former boss. Barack Obama once believed mass deportations would inspire the Republicans to negotiate over comprehensive immgration reform. After many years and many families rent asunder, he came to understand they didn't mean what they said. By the time he realized "border security" meant "don't admit Black and brown people" — by the time he realized "illegal immigrants" meant "Black and brown people are illegal" — it was too late.

And yet the Democrats keep talking about "border security" as if the Republicans really believe it's important. Worse, they keep funding it. Customs and Border Patrol is now the biggest federal law enforcement agency in the United States. Along with Immigration and Customs Enforcement, the CBP eats up "nearly $20 billion a year, a non-trivial portion of which goes to shadowy private companies like Geo Group and Core Civic for incarceration," according to Elizabeth. With virtually unlimited resources comes incredible and virtually unchecked power. "They decide who gets arrested, who gets hearings, who is deported, and who will be jailed indefinitely. They are huge, awash in cash, poorly supervise and incentivized to be maximally cruel," Elizabeth wrote.

You might think that's an acceptable price to prevent drug and human trafficking, gun-running and other criminal activity. You might think that's an acceptable price to keep Americans safe. Fact is, though, you're getting more security from local police departments than you're getting from America's biggest cop shop. For all the billions spent, for all the advanced technology, and for all the miles of border wall built over 20 years, ICE and CBP "have not reduced crime rates, ended the illegal narcotics trade, prevented the flow and use of deadly weapons, or in any other way made people safer," Elizabeth wrote in April.

What has been accomplished? A huge and lawless bureaucracy. ICE is subject to thousands of sexual assault and harrassment complaints every year. CPB is known for working with armed vigilantes who "patrol" the border. An inspector general report found that American citizens and American journalists were being tracked by CPB. Both agencies served as the former president's "secret police" last year. Elizabeth: "There are many reasons that we find ourselves living with two sprawling immigration police forces that each year encroach further on the basic civil rights and safety of everyone in the US." Me: The more we accept the premise that we need "border security," the more we empower fascists inside the United States government.

Border Patrol's most basic purpose is regulating flows of people in and out of the United States. It can't do its job, though, because its job is impossible. The horsemen incident is a case in point. The pictures we saw showed mounted Border Patrol agents trying to force Haitian migrants back into Mexico. Thing is, they already crossed. They had gone back to Mexico to get food. Video of the horsemen show Haitians just walking around them. It was an exercise invoking images of slave catchers, yes. But it was also an exercise in futility. I mean, more than 10,000 people walked over in broad daylight. The CBP was impotent.

For those wondering if a wall would work, no, it wouldn't. The southern border is nearly 2,000 miles long. Most of it is the Rio Grande. It's subject to seasonal monsoons. That means flooding, major flooding. No sooner does the government put up walls and other barriers than Mother Nature comes along to knock it all down. And if the monsoons don't knock them down, the smugglers will. America's effect at "border security" has been as successful as its war on drugs.

While "border security" isn't attainable (in the way Republicans define it), it might be desirable to try — if the Republicans meant what they said. They don't, though. Every time Barack Obama tried meeting their demands, they created new ones, forcing the former president to keep chasing ever-receding horizons. I don't know what Joe Biden has in mind by putting Haitians on airplanes and sending them back. But if we're ever going to get a Democratic president to change his mind, we have to convince more people that "border security" is a canard.

Editor's note: An earlier version of this article referred to "white men on horseback cracking whips at Black Haitians." An original source for that claim subsequently issued a correction, noting, "Our reporting team witnessed at least one agent on horseback swing his reins like a whip. We have updated the story to clarify that fact since it was not an actual whip." This article has been updated to reflect that correction.