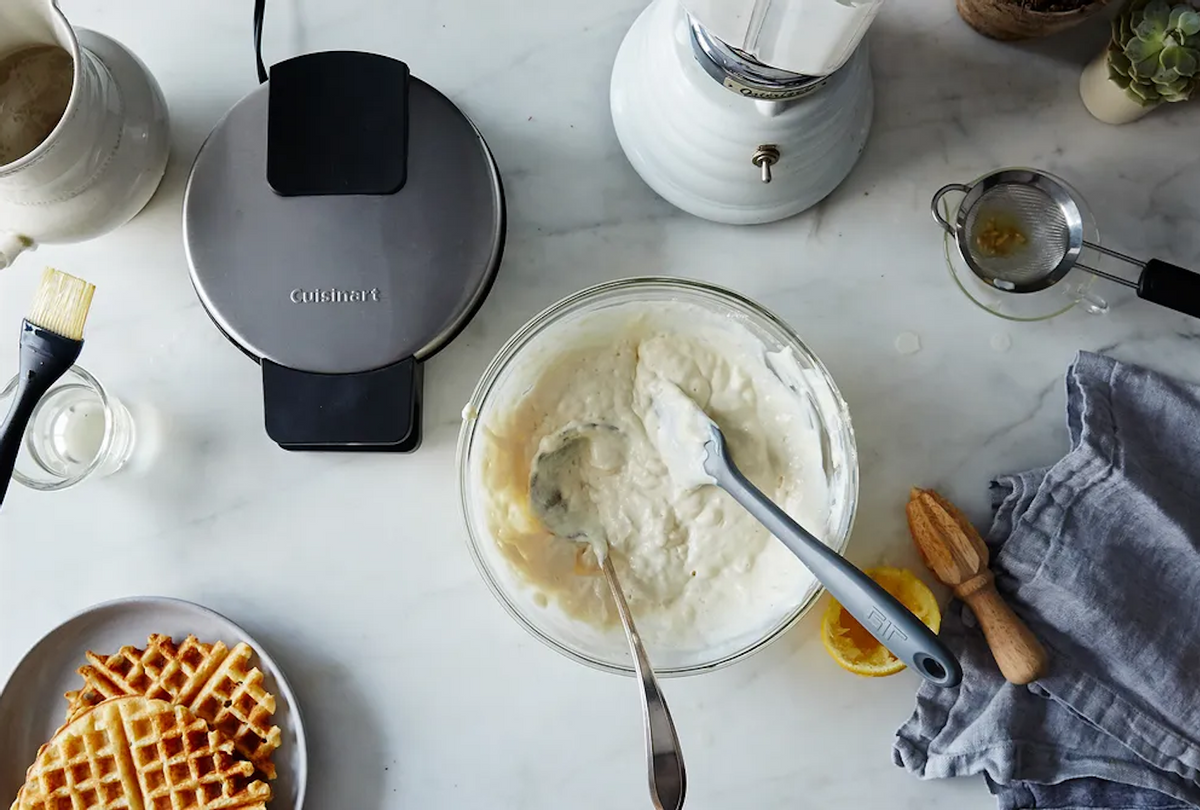 Maybe you forgot to buy eggs at the supermarket. Or you dropped the carton on the floor. Or you don't eat animal products, period. In these cases (and then some), swap-ins come in handy. Today, we're going to share the best egg substitutes, and some of our favorite egg-free recipes.

The egg chapter in "On Food and Cooking," one of the most acclaimed food science books ever printed, is 47 pages long. Which is to say: Eggs are a multi-talented ingredient. They emulsify sauces, leaven baked goods, thicken custards, hinder crystallization, and that's not even getting into what happens when you separate the yolks and whites to best utilize each component's unique culinary qualities.

If a recipe was developed with eggs and you're forging your own path with a substitution, there's no getting around the fact that the recipe will turn out differently — after all, you're using a different ingredient. But the ingredients below, fruit like mashed banana and applesauce and pantry staples like flaxseed, chia seed, and aquafaba (more on this magical plant-based substance below), will ensure that the eggs' absence is noticed as little as possible, if at all.

Flaxseeds have an earthy, nutty flavor and are rich in omega-3 fatty acids. You can buy flaxseed pre-ground, or grind whole seeds yourself with a spice mill or coffee grinder. When ground and combined with water, flaxseed's mucilaginous superpowers kick into high gear, yielding an elastic, sticky consistency much like beaten egg that's known as flax egg. Flax egg is a popular addition in baked goods from cookies to quick breads because it adds body and structure. Unlike real eggs, however, they don't assist in leavening.

Chia seeds are also rich in omega-3 fatty acids (not to mention protein and fiber), though they have a milder flavor than flaxseeds. Their potent thickening ability makes them an A+ shortcut to homemade jam, and for the same reason, they're useful when you need to add more structure to vegan baked goods, like waffles and quick breads. Like flax seeds, chia seeds don't contribute to leavening, so make sure you're using strong enough ingredients to lift your batter or dough when incorporating these egg substitutes.

If you're like me, you always have bananas around, which makes this a super-convenient substitute. As The Kitchn notes, this ingredient works best "in chewy baked goods like brownies," as well as blondies. But depending on the recipe, the flavor might be a dealbreaker. In a 2015 vegan baking experiment, our contributor Sophie used mashed banana as a replacement for eggs in a muffin recipe. She reported back: "Out of all the muffins, the banana one clearly looked the most appealing . . . The texture was ever so slightly dense with a moist crumb. The only characteristic of this muffin I found problematic was the fact that it really tasted of banana." Fans of banana, however, will be very happy with the results.

As its name implies, silken is the softest of the tofu classifications. Blitz it in a blender or food processor for about 10 seconds, and you'll end up with a creamy-fluffy-smooth purée that can serve as a sturdy binder in baked goods. Its neutral flavor won't cause any distractions from the main flavors in your recipe and works especially well with stronger flavors like chocolate and peanut butter.

Aquafaba is the buzzword for chickpea cooking liquid — the same liquid found in every can of chickpeas you can buy. Drain those legumes for baking a batch of brownies now, then use the chickpeas for a hearty dinner tonight. While aquafaba may look a bit unappetizing and smell like beans (understandably), we've relied on it as a "magical" egg replacement for years. Add aquafaba to a stand mixer with some sugar and you're on your way toward a doppelganger vegan meringue. It also works well as a whole egg substitute in baked goods, like cakes and quick breads, and makes a great plant-based mayonnaise that can add moisture and flavor to chocolate cake.

Starches like arrowroot powder, cornstarch, potato starch, tapioca starch, and agar, all mixed with a bit of water until viscous and smooth, can serve as an egg substitute in enriched breads and cakes, as well as a thickening agent in custards and sauces. Experiment with different kinds of starch until you find the ones that substitute best in your recipes.

Combine vinegar and baking powder, and you have a lightning-rod leavening agent on your hands. While this combination can encourage cakes, muffins, and the like to reach their highest potential, it's also more sensitive — and prone to error — than the ingredients listed above. Definitely follow recipes with this substitute (like this Genius vegan birthday cake does), but I wouldn't recommend it as an ad hoc replacement unless the recipe has successfully been tested with vinegar and baking powder before.

If you don't feel comfortable taking a chance on any one ingredient, consider turning to a commercially developed egg replacement, such as Energ-G, Orgran, or Bob's Red Mill. These are made with a combination of egg substitute options like potato starch, tapioca flour, baking soda, and psyllium husk fiber. Simply follow the package instructions, and rest easy.

How to substitute eggs in recipes

Now that we know the most common egg substitutes, let's dive deep with some recipe examples, and figure out which one is your best bet for each.

Flax meal keeps this date nut bread moist and fluffy — no eggs needed. There's also a hot tip in this recipe for vegan buttermilk: vinegar and non-dairy milk left to sit for 5 minutes.

It's a cake! It's banana bread! It's both! This fudgy, uber-chocolatey cake stays moist, yet still rises to form that spongy, cakey texture by relying on mashed bananas and almond butter instead of eggs. Now you just have to decide if you want to make it for dessert tonight or tomorrow morning's breakfast.

Good morning to these vegan cinnamon rolls! While many cinnamon roll doughs call for an egg, this dough is just flour, sugar, yeast, water, non-dairy milk, and coconut oil. Their shiny glaze is as simple as powdered sugar and more vegan milk.

Vegan brioche?! I need to sit down. Though it's a bit of an oxymoron, as brioche dough is typically enriched with eggs and butter to get that luxuriously rich and pillowy texture, this vegan brioche calls for aquafaba (that magic liquid from a can of chickpeas!) and oat milk.

Bring this stunner to the table and proudly announce, "there's tofu in this pie!" When blended with vegan milk, maple syrup, and non-dairy chocolate, silken tofu whips up into the dreamiest mousse.

Classic pumpkin pie relies on eggs to thicken the custard when baked, but in this case, a homemade cashew cream and a bit of tapioca starch do all the work. (And yep, the flaky crust is vegan, too!)

Baking powder, baking soda, and apple cider vinegar join forces to make these pumpkin pancakes light and fluffy. Add some ground ginger to the batter if you want them spicier.

"Ultra-crispy on the outside, creamy on the inside, and the tiniest bit chewy, these waffles are phenomenal not in spite of the full package of tofu," our resident Genius Kristen Miglore writes, "but because of it."

Talk about overachievers: These muffins are vegan and gluten-free and double-chocolate. Flax eggs save the day here, giving the muffins a confident structure.

Flax eggs, we meet again. We'd eat this raisin-studded carrot cake plain, but the coconut cream frosting really sends it over the top.

Baking powder, baking soda, and vinegar give this chocolate cake its plush texture, while mashed avocado (yes) adds tons of moisture and richness.

Soaked chia seeds work as the binding agent in these gooey vegan brownies — they're actually gluten-free, too (thanks, buckwheat flour!) Serve them with toasted walnuts and a scoop of vegan ice cream.

Oatmeal cookies without eggs? Totally possible. These include oats (duh), brown sugar, and tahini. Because, in this case, the egg substitute is magic.

Looking for a delicious new way to use up a bounty of apples? These fruit-forward brownies rely on apples' natural binding properties to add moisture, sweetness, and flavor. Warming spices like cinnamon and nutmeg bring all the elements together for a fall treat you'll make over and over.

Coconut is everywhere in this recipe: in the batter, in the whipped cream, and as a garnish. Thanks to coconut's magical ability to add flavor and texture in multiple forms — oil, milk, and extract in this incredibly coconutty cake — it's practically impossible to notice there's no dairy or eggs in it.

Buckwheat lends an extra nutty bite to this giant skillet cookie that's vegan, gluten-free, and ready to be topped with your favorite plant-based ice cream (or top with cold whipped coconut cream for an equally rich flavor infusion).