A gift from the diaspora, perfect to break the fast 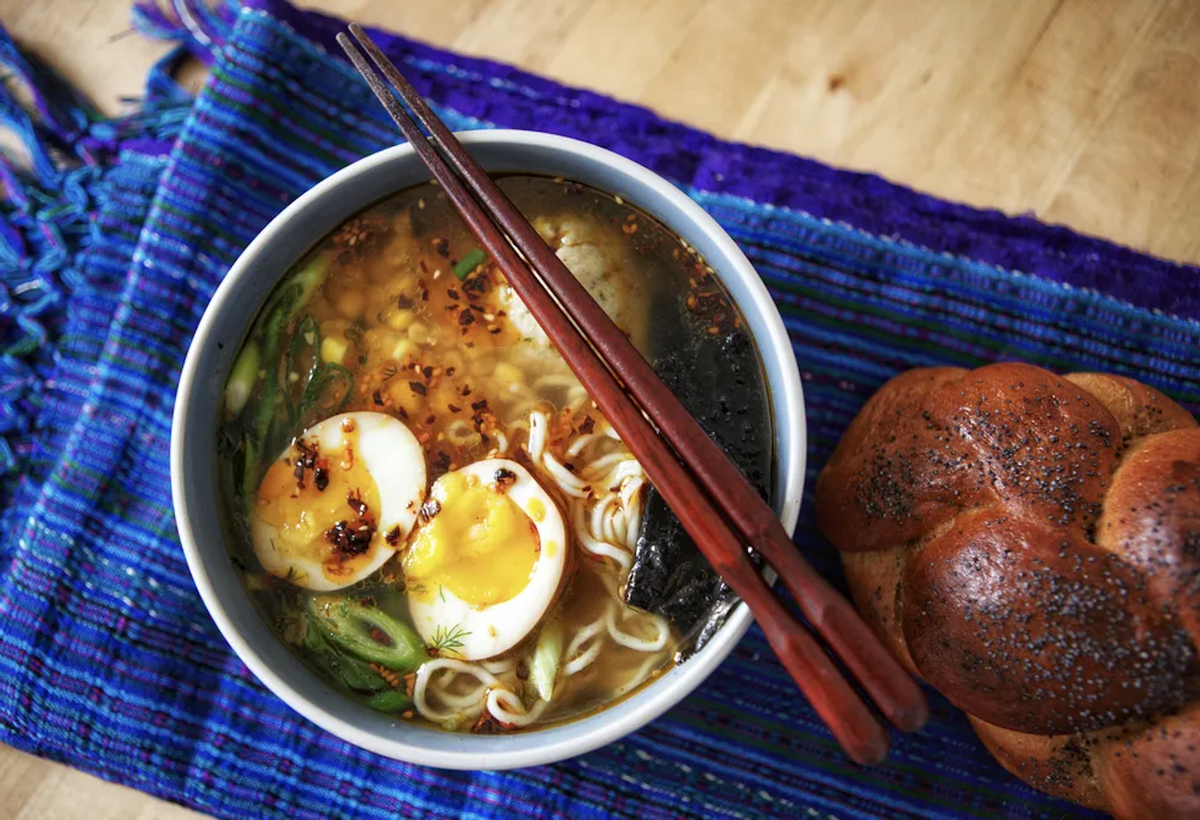 I hustled into Shalom Japan in Williamsburg, Brooklyn, on a stormy Friday night. It was dimly lit inside and had all the ambience of a casual Japanese ramen joint. Inside the bathroom, there was an enlarged photo of a Levy's Jewish Rye ad from the '60s, which read "You don't have to be Jewish to love Levy's real Jewish Rye" in large black letters, with a picture of a Japanese boy dressed in a white shirt and red tie holding his sandwich next to an open bag of Levy's Jewish Rye.

There was only a handful of tables. I grabbed a seat at the bar with an open view of the kitchen to my right. A native New Yorker I had met in Berlin happened to be in town at the same time and joined me. I saw chefs Aaron Israel and Sawako Okochi busy at work and turned my attention to the menu, giving it a cursory glance. But we both already knew we were getting the matzo ball ramen soup. How could we not?

Matzo ball ramen soup: It sounds like forced fusion, doesn't it? But it actually makes sense. Matzo balls are chameleons of the soup world. They can just plop into a bowl without crashing the party. Chefs and husband-wife duo Aaron Israel and Sawako Okochi combine their Ashkenazi Jewish and Japanese backgrounds for a warm, brothy bowl that just makes sense.

Historical Jewish cooking mirrors the well-known story of persecution. Jews made similar dishes as their neighbors, with religious Jews adapting recipes to make them kosher. When they'd get kicked out of town by some new royal decree, they'd take their recipes, settle someplace else, and start blending their food with that of their new neighbors.

But what's happening at Shalom Japan is something different. The matzo ball ramen wasn't birthed out of persecution, but out of love. We can increasingly see this across the Jewish culinary world. In many ways, Jewish food is evolving on its own terms for the first time in history, and dishes like Shalom Japan's matzo ball ramen are a celebration of that freedom.

Shalom Japan uses a chicken broth with char siu chicken, scallions, and nori as its base for the soup. For a little extra, you can get a soy-marinated egg, foie gras dumplings, or an additional matzo ball. Though basically a vegetarian in my own kitchen, I tend to indulge in unique experiences when I travel. So I decided to go for the foie gras dumplings, and the soy-marinated egg was already a no-brainer.

After a few slurpy noodles from the steamy bowl of ramen, one of the waiters stopped by and asked how we liked the matzo ball ramen and if we'd ever had it before.

"I've had ramen and matzo ball soup before," I nodded. "But not together."

"For someone who isn't Japanese or Jewish, it just makes sense to me," he said, clearly smiling behind his mask.

Back in Berlin, I took a crack at my own matzo ball ramen, and it came together nicely. There was the earthiness of the veggie broth, with carrots, celery, turnips, parsley, onions, and dill: just some of the building blocks of so-called Jewish penicillin. I added corn and chopped scallions, following the lead of Shalom Japan. With the noodles I started the shift to Japan, as they were different from the wider egg noodles more typical of Ashkenazi Jewish cuisine. Then I went full ramen with the soy-marinated, soft-boiled egg halved and left on top, with the egg yolk still oozing out.

Shalom Japan throws some garlicky chile oil on top, so feel free to use your favorite brand or make your own. Drizzling some of the soy marinade over the dish, with its chile pepper flakes, also helps bring it all together. (Oh, and I slid a small sheet of nori on the side just to be fancy-ish, I guess.)

Ultimately, one of the best things about this dish is that you can easily make it your own, to tell your own story. Use your own cherished broth and matzo ball recipe. Try skipping back-and-forth between Ashkenazi Jewish and Japanese staples, like dill or miso. Bring it out to break your Yom Kippur fast, to serve with Passover leftovers, or just to make a boring Saturday night feel special.