A do-it-yourself IUD removal trend is either macabre or empowering, depending on who you ask

Shocking as it may seem, some reproductive health experts say there's nothing wrong with at-home IUD removal 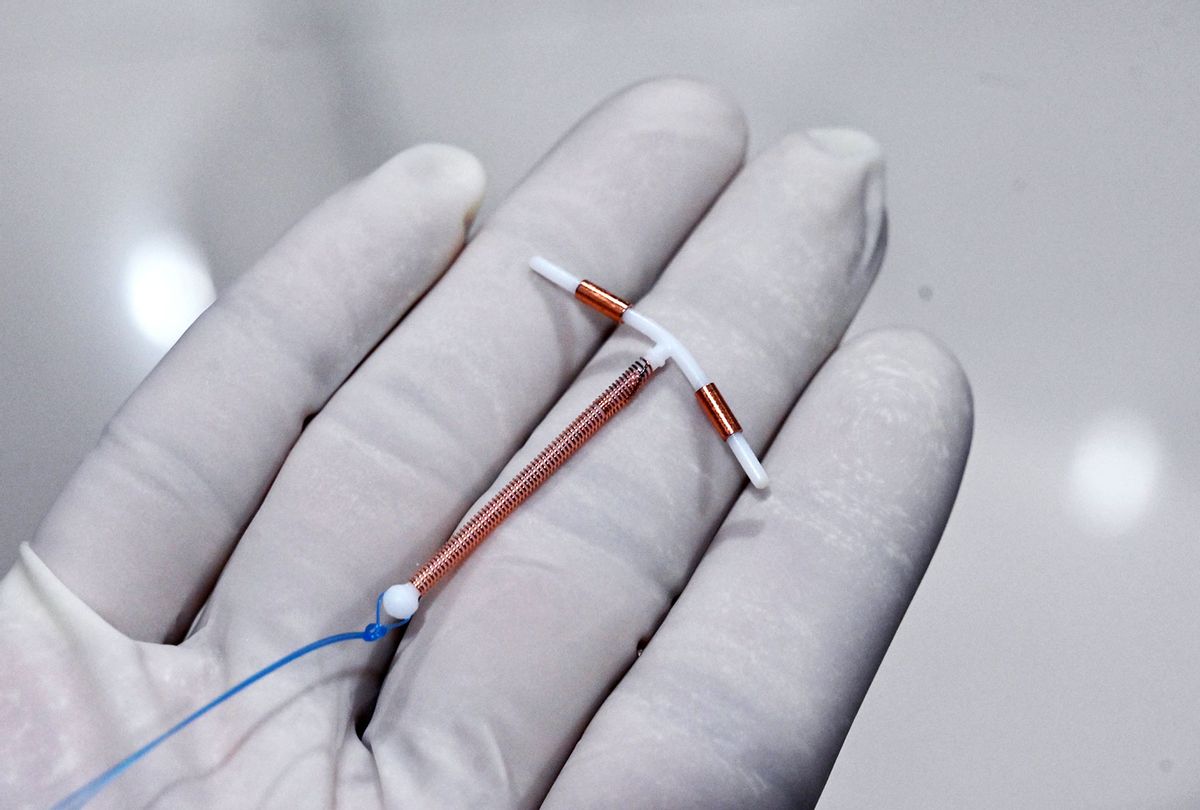 A viral TikTok video of a woman allegedly showing users a "do-it-yourself IUD removal" — claiming she removed her own intra-uterine device herself, at home — is prompting others who want to remove their own IUDs to try it themselves.

Meanwhile, the lurid social media "trend" is stirring controversy — with some reproductive health experts and doctors disavowing it, while others commenting that self-removal of one's IUD can actually be "empowering" and is not particularly unsafe if done with caution.

The initial viral video by TikTok user Mikkie Gallagher, which was posted in March 2021, now has 2.1 million views and counting. In it, the camera focuses on her face as she dons blue surgical gloves and then allegedly inserts her fingers into her vagina, locates the strings and pulls the contraceptive device out. In the next scene, the IUD dangles in her hand; she jokes that her Mirena IUD is the "catch of the day. " In a comment she added to the video, Gallagher clarifies that her home IUD removal was a "last resort" after "constant pain" and five doctors refusing to remove it. Gallagher added that it was done after a consultation on a telehealth platform.

Salon contacted Gallagher for an interview to learn more, but did not receive a response prior to publication.

As the comments section of her video reveals, Gallagher's TikTok has become a huge source of controversy. Some viewers expressed shock; others said they were inspired to remove their own IUDs themselves, too; others still warn of the danger of at-home IUD removal. Months after she posted her video, the hashtag #iudremoval on TikTok has grown in popularity, with more similar videos being posted in last month. The hashtag alone has 65.4 million views.

For people without uteruses, or anyone who has never had an IUD inserted, modern progestin-containing IUDs are small T-shaped devices that have tiny threads at the bottom.The hormone released by these IUDs, progestin, prevents pregnancy by thinning the uterine lining to keep a potentially fertilized egg from implantation. It can also slow down the sperm's movement in the fallopian tube. IUDs are said to be 99 percent effective; the Kaiser Family Foundation estimates 14% of American women who use contraception rely on IUDs. IUDs are generally inserted by a nurse or doctor, who will put a speculum into a person's vagina and use a special insert to place it in a person's uterus through the opening of the cervix. This process takes less than five minutes. Similarly, nurses or doctors generally oversee the removal of IUDs as well. While the median cost of IUD removal is $262, it can range from $50 to $1,000.

While headlines have surfaced advising people not to take out their own IUDs in light of the TikTok trend, not all doctors are against it. In fact, some say it can be done safely, and posit that it can even be empowering to take out one's IUD.

Jody Steinauer, an OB-GYN at San Francisco General Hospital and director of the University of California–San Francisco's Bixby Center, told Salon she would recommend those with IUDs to try to take them out themselves — but only if they are comfortable with it.

"I'm all for it, when you want it out — why do you have to come in to see us?" Steinauer said, adding that she's removed her own IUD before. "I would say, if one tries and it doesn't come out easily, then they come and see us. Don't pull harder, don't try multiple times. But I think it's completely fine to try it if someone wants their IUD out."

Steinauer added there are benefits to empowering people to do it on their own, for whatever reason they choose. According to a study published in 2012, the mere fact that a clinician needs to be the one to remove an intrauterine contraceptive (IUC) may deter some women from trying the method. In the study, 602 women seeking abortion completed a survey in the waiting room and were asked to rate their interest in using a hypothetical "new" self-removable IUC; 25% of the survey's respondents said they would be more willing to try an IUC if they could remove it themselves.

Diana Greene Foster, a demographer and professor in the Department of Obstetrics, Gynecology & Reproductive Sciences at the University of California–San Francisco, who co-authored the aforementioned study, told Salon the idea of the study came to mind when a clinician told her she could remove her own IUD.

"It just was shocking to me that this existed as an option, and with all the work I had done I had not been ever told that I could remove it myself," Foster said. "What a clinician does when they remove your IUD is to take forceps and take the string and pull on it. There isn't anything different about doing it yourself from what a clinician would do."

Foster authored a second study published in 2014, in which 326 women were tasked with self-removal of their IUDs. In the study, 59 percent were willing to try; only 20 percent succeeded. The ones who did not succeed were those who couldn't feel the strings. Notably, women who managed to remove it themselves reported lower pain than those who had a clinician remove it for them.

Still, self-removal of IUDs is not common, and other reproductive health experts do not advise it. Planned Parenthood recommends that a nurse or clinician remove your IUD, in case there is a rare complication.

"Very rarely, there can be complications during an IUD removal — the IUD may be embedded (stuck) in the tissue in your uterus, it may have moved, or a piece may break off," the organization states. "This is super uncommon, but if a complication does happen, a nurse or doctor will know what to do to safely remove your IUD."

Steinauer notes that people who want to take out their own IUDs, but are concerned about a potential complication, should make sure that they stop if the pulling creates a lot of pain or there's a "tugging sensation."

"If you do one kind of swift pull and it comes out, I would just also make sure that you see the whole IUD, look online and know what your IUD looks like, so that when it comes out you see the string attached to the bottom of the T and you see the whole T," Steinauer said. "And if for some reason one part is missing, which rarely happens when we remove them, I would just then go see a clinician. You can even put it in a little plastic bag so you can show them."

Indeed, it is possible that more clinicians in the future might ask those with uteruses if they want the option to remove their own IUD.

"I think that when a person gets an IUD, that they should be asked" about how long they want the length of the attached IUD string, Foster said. "If they want [the string] long, [they] have the opportunity to remove it themselves; or do you want it short so that nobody knows you have it. Both are reasonable choices," Foster added.