Beware the "Independent State Legislatures doctrine" — it could checkmate democracy 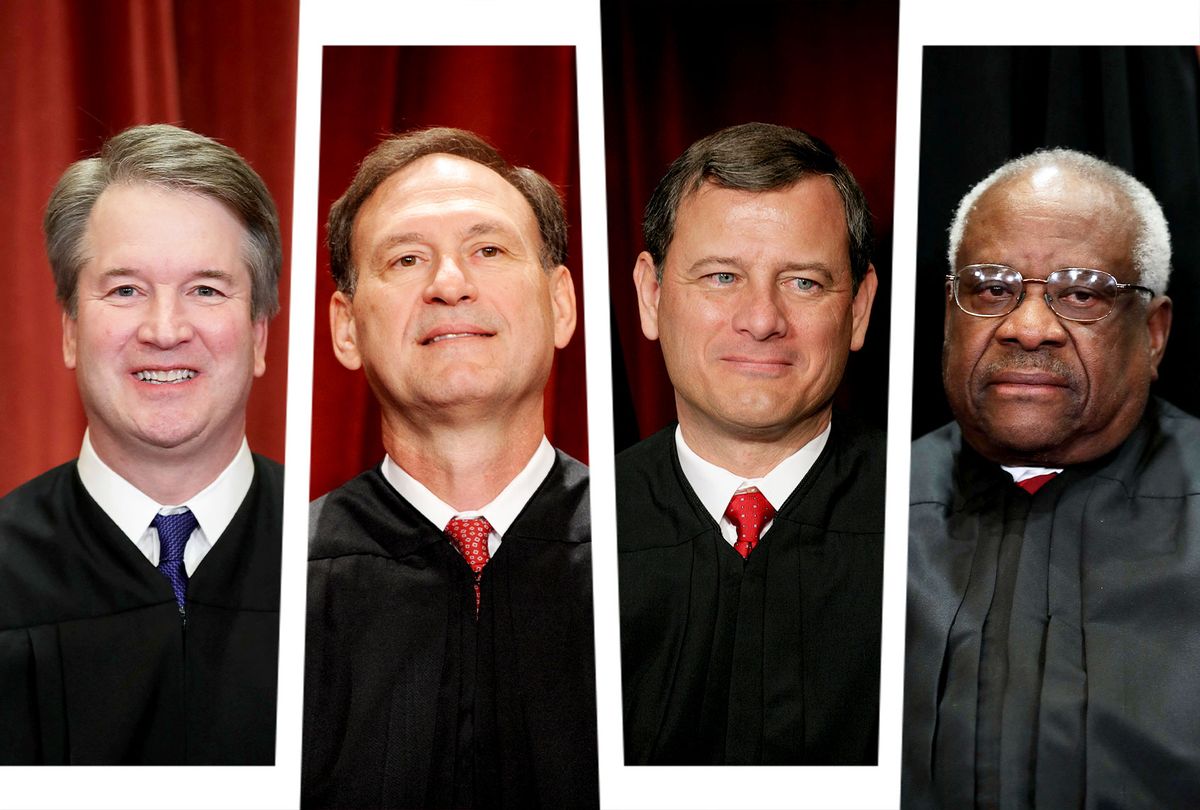 Last Friday, we finally learned that the draft report of the crassly partisan Maricopa County election "fraudit" commissioned by Arizona's state Senate Republicans failed to find voter fraud and indeed, yet again, found that Trump lost. But brazen Republican state legislatures won't stop there. These days it feels like a never-ending challenge to stay one step ahead of voter suppression and democracy dismantling efforts in Republican-controlled state legislatures.

A decade ago, Republicans gerrymandered themselves into unrepresentative majorities in state legislatures nationwide. Since then, they've been determined to keep that undue power, no matter how many constitutional guardrails they must smash along the way. Their latest scheme might be the most wild-eyed and dangerous yet.

Republicans have hit upon a legal theory that could allow them to negate state constitutions and citizen ballot initiatives that protect voters and provide them with a crucial voice. The end game? Securing a world in which only state legislatures can decide election law and declare victors. They're looking for an assist from the federal courts. And they just might get it.

This once-obscure theory — known as the Independent State Legislatures doctrine — had been a stealth effort in right-wing legal circles. But recent election-related litigation in state supreme courts and the federal courts, much of it related to the "Big Lie," has accelerated its prominence and highlighted its dangers.

Here's what the Independent State Legislature doctrine argues: The U.S. Constitution gives state legislatures the sole authority to set all election rules — including the assigning of Electoral College votes — independently, and immune from judicial review. Taken to its natural extreme, it holds that election laws set by state legislatures supersede any rights guaranteed in state constitutions or even initiatives passed by voters. It effectively concludes that there can be no possible checks and balances on state legislatures' authority when it comes to election law.

Sounds nuts, right? But four justices on the Supreme Court have already indicated some level of support for this doctrine — and the newest justice, Amy Coney Barrett, has yet to weigh in.

This emerging judicial doctrine is a serious threat to the integrity of future elections, and to democracy itself, which fundamentally relies on checks and balances between branches of our government. Make no mistake: It is part of a long-term conservative strategy to enlarge the power of state legislatures. Its rise comes at a moment of continued Republican dominance in states. Gerrymandered state legislatures nationwide are working overtime to pass ever more restrictive voting provisions and wacky proposals to reallocate electors by gerrymandered congressional district. And after Republican-controlled legislatures brutally gerrymandered state legislatures across the country in the 2011 round of redistricting, they are warming up to do it again now as the 2021 redistricting cycle gets underway. The Independent State Legislatures doctrine adds yet another arrow to the Republican anti-democracy quiver.

Republicans have engineered their way into power, and will use this doctrine to try to checkmate democracy. It's time to learn about this theory and gear up to fight back.

What is the doctrine?

Article I, Section 4 of the U.S. Constitution provides that state legislatures have the power to determine the "times, places, and manners of holding elections for Senators and Representatives." Further on, Article II, Section 1 provides that each state "shall appoint, in such Manner as the Legislature thereof may direct, a Number of Electors...." As in many places, the Constitution is short here on details. (Thus the gigantic lineage of constitutional jurisprudence.) In the sections just quoted, state legislatures are meant to fill in the details.

Lawyers pursuing a conservative agenda have argued, perhaps not surprisingly, that these clauses should be read narrowly and literally. State legislatures, the argument goes, really do have the broad and exclusive authority to determine how to run elections. State legislatures receive these powers directly from the federal Constitution, wholly independently of state constitutions — therefore, state courts do not have the authority to review state election laws. Further, state legislatures can ignore state constitutional provisions that provide for broader voting rights than those guaranteed by the federal Constitution or federal law.

Again, it sounds nutty, right? But in the 2000 Supreme Court case that decided the presidential election, Bush v. Gore, then-Chief Justice William Rehnquist, along with Justices Antonin Scalia and Clarence Thomas, made this exact case: State legislatures have the sole power to run elections, including picking electors — and this cannot be altered by state courts.

In the intervening years, conservative lawyers have continued to build the case for this doctrine. And in February of this year, when the Supreme Court dismissed as moot the Pennsylvania case regarding 2020's absentee ballot extension, Justices Samuel Alito, Neil Gorsuch and Thomas dissented, citing the Independent State Legislatures theory and arguing that it should be settled before the next election. Further, last October, when the Court declined to disturb a separate ballot-deadline in Wisconsin, Justice Brett Kavanaugh dissented and, in a footnote citing Bush v. Gore, stated that "the text of the Constitution requires federal courts to ensure that state courts do not rewrite state election laws." His words make clear his strong support for this doctrine.

The doctrine could also have devastating consequences for fair maps. Redistricting reformers have eyed state supreme courts as one road to fair maps, free from partisan gerrymandering, now that the federal courts have been shuttered. That path could quickly be blocked under this doctrine. It's even possible that this doctrine could be used to challenge nonpartisan redistricting reform established by citizen ballot initiative, or any redistricting process other than one approved by a state legislature. The theory was rejected by the court's majority when invoked to challenge the Arizona independent commission in 2015, but two of the votes from that majority, Justices Anthony Kennedy and Ruth Bader Ginsberg, are no longer on the court. Chief Justice John Roberts was the lead — and angry — dissenter in that case -- indicating his likely support for a strong Independent State Legislature doctrine.

The Independent State Legislatures doctrine used to be a fringe theory, but not anymore. Multiple Supreme Court justices are on the record in support of it. Right-wing legal activists from the Federalist Society and its "Honest Elections Project" are pushing for it in legal briefs authored by white-shoe law firms (BakerHostetler, counsel for the Honest Elections Project, has defended Republican gerrymandering in Pennsylvania and North Carolina.)  And some GOP-controlled state legislatures, including Arizona, are considering bills that would allow them to intervene in presidential elections to choose electors themselves if election results are "unclear." If a state were to pass this type of law, it would set the stage for a court to agree that the Independent State Legislature doctrine requires that in some circumstances, state legislatures rather than voters should determine election outcomes.

As Jane Mayer reported recently, right-wing funders like the Bradley Foundation and the American Legislative Exchange Council (ALEC) have been working with Republican state legislators to advance ways to re-engineer how states allocate Electoral College votes. Last year, a GOP state representative from Arizona, Shawna Bulick, sat on an ALEC-convened working group that discussed the Electoral College, and this year, she introduced a bill that would have given the state legislature power to undo the certification of presidential electors by a simple majority vote up until the inauguration.

It died in committee — this time. But next time? Introducing legislation that fails serves to normalize it and is often part of a longer-term strategy to build support over time.

This is all part of a coordinated and well-funded strategy to enlarge the power of state legislatures. Conservatives, of course, have already established a commanding advantage in state legislatures through gerrymandering and long-term investment in down-ballot races. Now these bodies are taking advantage of any audacious power play they can imagine — or any wild-eyed reading of the U.S. Constitution — that might keep themselves entrenched in office, no matter how outrageous the scheme or how antithetical it may be to the founding ideals they claim to venerate.

How we fight back: Building progressive power in state legislatures

Our state legislatures have become wildly imbalanced. Republicans already enjoy structural advantages in the U.S. Senate and the Electoral College. And many state and federal courts have been captured by conservative ideology.

We cannot allow the courts to imbue unrepresentative state legislatures with the ultimate power to award electors, regardless of the popular vote. We cannot allow state constitutions to be neutered of their power to check the most egregious gerrymanders and we cannot allow ballot initiatives that provide for citizen mapmaking commissions to be prohibited. The Independent State Legislatures doctrine threatens to do all three.

Good news: We can fight back. Redistricting is underway across the country, and we can fight for fair maps to keep Republican legislatures from gerrymandering their way into enduring majorities. Attend legislative hearings (many have a remote option) and submit testimony — public accountability and pressure works. Support state-based organizations on the ground fighting for fair maps. And invest some time and resources into progressive state legislators and candidates. Fighting gerrymandering and building back the progressive state bench will take time, money and long-term commitment. But to ensure that representative democracy is not smothered and swallowed whole, there is no alternative.