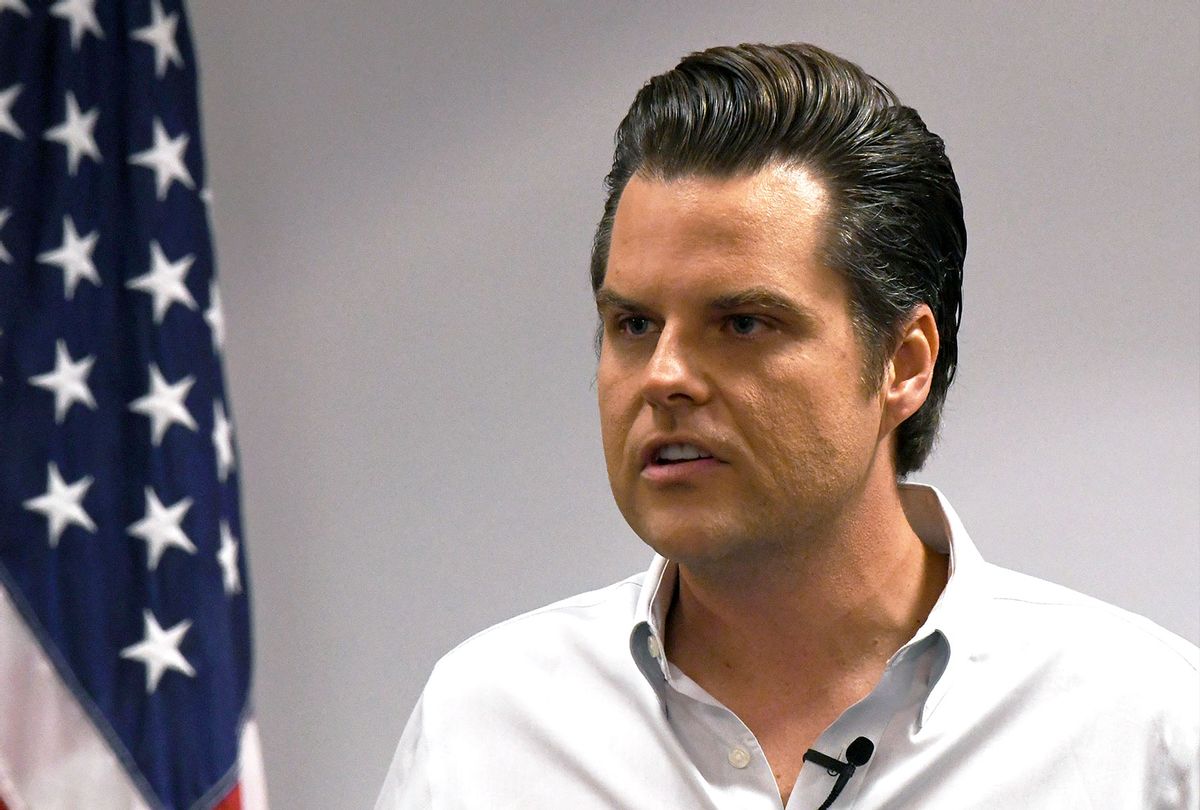 "But why? Well, Joe Biden just said it, to change the racial mix of the country," Carlson claimed. "That's the reason, to reduce the political power of people whose ancestors lived here, and dramatically increase the proportion of Americans newly-arrived from the third world."

Since April, Carlson has repeatedly pushed the notion that Democratic elites are intentionally loosening borders in order to allow non-White immigrants to supplant the electoral power of White Americans – a baseless white supremacist theory.

In 2019, the theory inspired a mass shooting in El Paso, as well as the Christchurch mosque shootings in New Zealand that same year, Insider noted. During the "Unite the Right Rally" in 2017, hundreds of white supremacist protesters gathered in Charlottsville, Virgnia chanting slogans like "You will not replace us" and "Jews will not replace us," alluding to fears around America's changing ethnic landscape.

On Saturday, Gaetz appeared to formally back this theory, tweeting that Carlson "is CORRECT about Replacement Theory as he explains what is happening to America."

Gaetz also added that the ADL – a Jewish non-governmental organization dedicated to combating anti-Semitism and led by Jonathan Greenblatt, a former Obama administration official – is a "a racist organization."

His comments appear to stem from the same Carlson radio broadcast, The Guardian reported, in which Kelly asked Carlson his opinion of the ADL.

He added that the ADL used to be "a noble organiation that had a very specific goal, which was to fight antisemitism, and that's a virtuous goal. They were pretty successful over the years. Now it's operated by a guy who's just an apparatchik of the Democratic party."

In response, the ADL has renewed its calls on Fox News to oust Carlson over his support of the theory.

"If it somehow wasn't clear enough before to the executives at Fox News that Carlson was openly embracing white nationalist talking points, let last night's episode be case and point," Greenblatt said. "We reiterate our call to Fox News and Lachlan Murdoch: Tucker Carlson must go."

CEO of Fox Lachlan Murdoch has in the past come to Carlson's defense on the matter, arguing that his theory brings up an allegedly legitimate "voting rights question."

House Republican Conference Chair Elise Stefanik, R-N.Y., two weeks ago launched an ad campaign  warning their constituencies that Democrats are working toward "a PERMANENT ELECTION INSURRECTION" by expanding pathways to citizenship for immigrants. Last week, Rep. Brian Babin, R-Tex. similarly claimed on Newsmax that the Democrats "want to replace the American electorate with a Third World electorate that will be on welfare."