The NYPD says the matter "is under internal review" 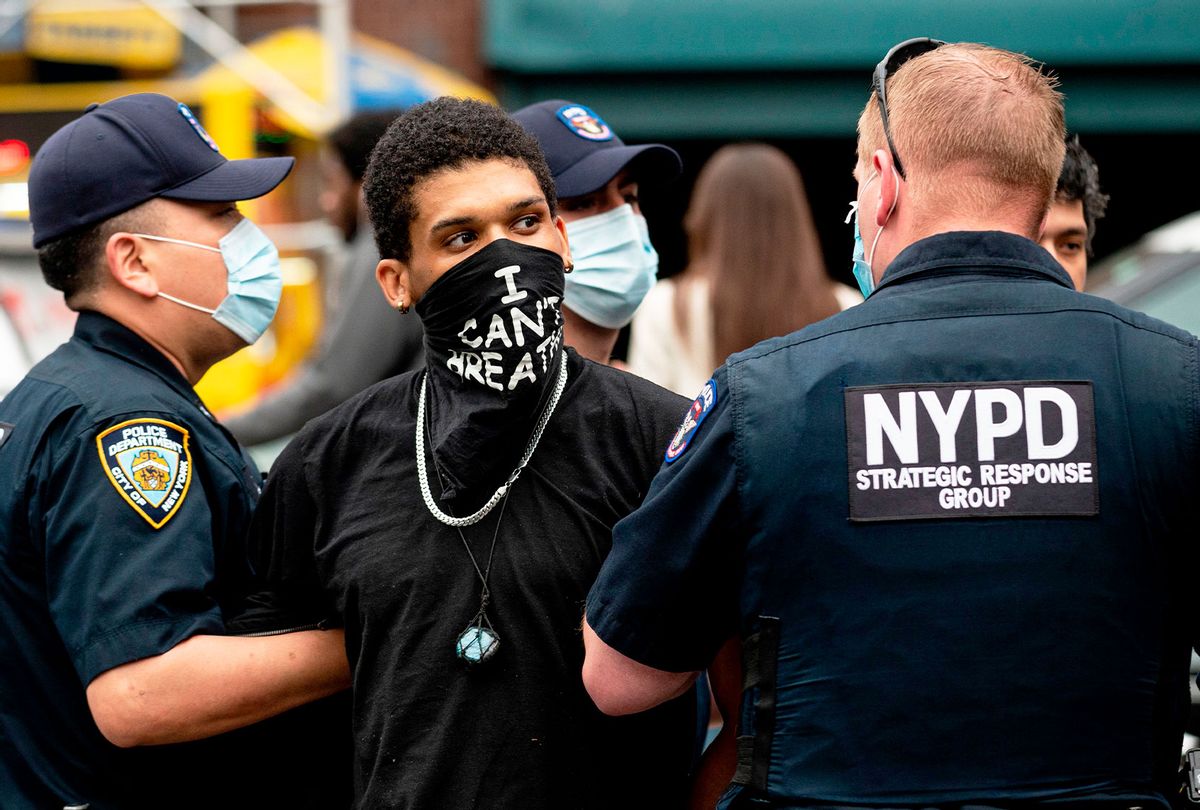 NYPD officers arrest a protestor during a "Black Lives Matter" demonstration on May 28, 2020 in New York City, in outrage over the death of a black man in Minnesota who died after a white policeman kneeled on his neck for several minutes. (JOHANNES EISELE/AFP via Getty Images)
--

The New York Police Department launched an internal investigation Thursday after a data leak reportedly revealed at least two of its officers are affiliated with the Oath Keepers, a far-right anti-government militia whose members were well-represented among the crowd storming the U.S. Capitol building on Jan. 6.

"The incident is under internal review," a spokesperson for the NYPD told CNN.

The leak contains emails, published by Distributed Denial of Secrets, between various Oath Keepers and the group's prospective members, the outlet reported. It remains unclear whether the pair of officers are current or former members of the right-wing group and neither officers are currently under scrutiny in connection with the Capitol insurrection.

The leak, first reported by Gothamist, comes on the heels of a separate but similar hack coordinated in August, in which hacktivist group Anonymous revealed that it had successfully penetrated Epik, a web hosting company that "provides domain name, hosting, and DNS services for a variety of clients," including Gab, Parler, and QAnon home 8chan, as well as the Texas GOP and a variety of other right-wing networks, according to Wired. The group, which gathered 180 gigabytes of data, is now allegedly sitting on a "decade's worth of data from the company."

Aside from the aforementioned NYPD officers, Gothamist also confirmed that three New York public officials were formerly associated with the Oath Keepers. Two of them – Ralph E. Stacy, an Oswego County legislator, and Thomas Zmich, a candidate for Queens Borough president – are members of the state's GOP Party. The third, Ed Keyrouze, is chief of staff for the New York Guard.

Gothamist could not confirm that the NYPD officers named in the hacked records are active members of the Oath Keepers, so the outlet chose not to publish their names.

New York Mayor Bill De Blasio said in response to the allegations that "there will be a full investigation to find out if any officer was involved, how were they involved, what did they do, what did they say, if it's the kind of thing that would disqualify them from serving."

"If we receive an allegation of someone being affiliated with those particular groups, then that would definitely automatically trigger a thorough investigation," NYPD Chief of Patrol Juanita Holmes added.

In the past, Oath Keepers founder Stewart Rhodes claimed the group recruits heavily among past and present members of law enforcement.

Correction: A previous version of this story connected the Oath Keepers data leak to a separate incident in which the hacktivist group Anonymous shared data it obtained from the web hosting company Epik, which serves a number of far-right clients. The two are different events which occurred around the same time.