A mix of burnout, shortage of nursing staff, and vaccine hesitancy among some health care workers brought us here 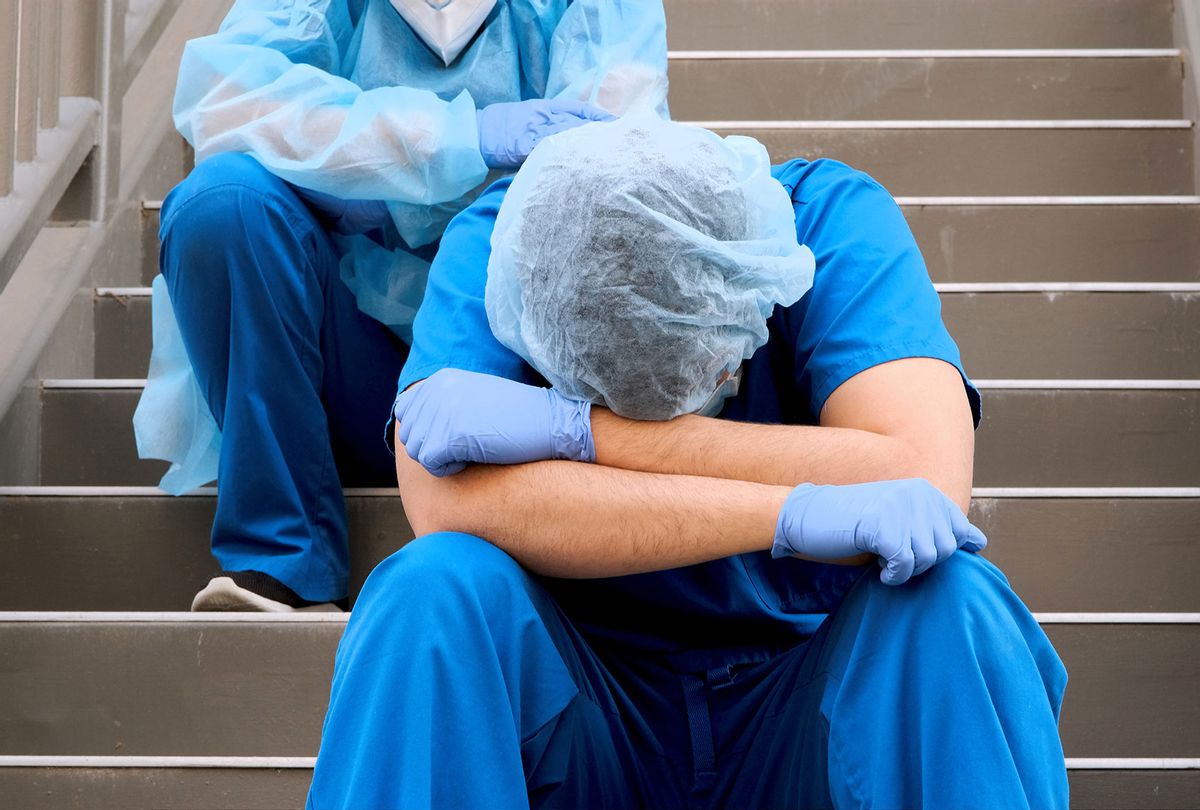 As COVID-19 vaccine mandates go into effect in various states and hospitals across the country, a small percentage of healthcare workers are quitting in protest. In upstate New York, six out of the 18 staff members in the maternity department at Lewis County General Hospital in Lowville quit rather than comply with the New York state's COVID-19 vaccine mandate. The loss of staff meant that the hospital had to temporarily pause delivering babies over the last couple of weeks.

"The math is just not working," said Gerald Cayer, chief executive officer of Lewis County Health System, at a news conference. "The number of resignations received leaves us no choice but to pause delivering babies."

While this one instance in upstate New York made headlines across the country, the trend is being observed in other communities. On Monday, a North Carolina-based hospital system announced that more than 175 of its 35,000-plus employees were fired for not complying with its vaccine mandate. Any loss of staff due to people not complying with the vaccine mandate, while small, is expected to exacerbate an already fragile healthcare system as healthcare workers have already been quitting in droves, generally due to burnout.

Indeed, a mix of a national shortage of nursing staff, vaccine hesitancy among some health care workers, and burnout are poised to put America's healthcare system in an extremely precarious situation. Specifically, the nursing shortage could "have long-term repercussions for the profession, the entire healthcare delivery system and, ultimately, on the health of the nation," the American Nurses Association (ANA), warned in a September letter to US health secretary Xavier Becerra.

In a recent survey from the American Association of Critical-Care Nurses (AACN), 66% of 6,000 critical care nurses surveyed said they had considered leaving their jobs because of the pandemic.

"The thing is, if nurses decide to leave the profession in the numbers that say they might, it would bring our healthcare system to its knees," Amanda Bettencourt, AACN president-elect, told Salon. "You wouldn't be able to get care for lots of things that you need, whether it's your health emergency or your loved ones' health emergency, and critical care nurses are not easy to replace because it takes at least a year past their academic training for a nurse to have the skills and knowledge to take care of critically ill patients."

Bettencourt said there's "not a fast way" to replace nurses who leave.

"There will be consequences for years after the pandemic, to try to restore our nursing workforce if we lose this many nurses," Bettencourt said.

While most nurses don't want to quit, many feel as if they have no choice because of how their work has negatively affected their mental health since the pandemic began.

Christiaan L., who asked to keep their last name private, has been an ICU critical care nurse since 2015. Even before the pandemic, he said he experienced a bout of burn-out when working two different jobs, which amounted to almost 70 hours per week of work. At the beginning of the pandemic, he had a baby. That, coupled with the stress of being a nurse during the pandemic, spurred him to quit his job at a hospital that he once believed he would work at for the rest of his career.

Now, Christiaan is a traveling ICU nurse, which provides him more flexibility, money, and more time to spend with his family.

"The thing that I've always loved about critical care and the ICU setting is, yes, we see a lot of really sad and tragic stuff, but there were also enough positive outcomes — I could see the influence of our work on making someone better, and that's kind of what kept you around," he said. "Since the pandemic has started that really hasn't been the case . . . the celebrations are very far in between, it just seems to be kind of tragedy after tragedy, and it definitely takes a toll on your emotional psyche."

Christiaan characterized the experience of being a nurse during the pandemic as an emotional rollercoaster.

"It comes in waves," he continued. "Some days you feel like you just want . . . to check out from it all and you just go through the motions. And some days it just hits you, like an emotional wall and you just break down."

When asked what could make work better, Christiaan said "a better understanding from the public of what we go through."

"It's an interesting position to be in, where you can go through so much tragedy and sadness in a shift and then you go home and someone online is saying, 'Well it's not real, it's a fake thing," he said. "But also from an organizational standpoint, making sure there's adequate staff, that you're getting the breaks that you need to even just get drinks and go to the bathroom and eat lunch or just to step outside and get a breath of fresh air — there are a lot of things organizations can do to kind of make workplaces a little more tolerable."

Other nurses quit or left their jobs not due to burnout, but because they refuse vaccination — a seemingly contradictory position given that healthcare systems are the most clear vantage point from which to observe how many more severe cases of COVID-19 occur in unvaccinated patients compared to vaccinated ones.

Fortunately, the latest numbers from the American Nurses Association say 90% or more of nurses are vaccinated, far above the national average of 66.8% of adults fully vaccinated. Still, even just a small percentage of workers quitting due to the vaccine mandates could strain the system. As Troy Bruntz, president and CEO at Community Hospital in McCook, Nebraska, said: "It doesn't make us feel too confident that this isn't going to turn into something short of a nightmare for American health care."

Whatever the reason is, hospitals are feeling the strain of worker shortages — and fear how it could soon get worse.

"This pandemic has stressed a system that was already very stressed, and nurses who were already feeling the effects of some of the strains on our healthcare system before the pandemic are just at their breaking point," Bettencourt said. "At the beginning it was about not having enough personal protective equipment to keep ourselves safe. Now because so many nurses have left, and there are so many patients and just not enough staff to take care of them, nurses are forced to provide care that is not what we think is best for the patient."

Bettencourt feared this would affect quality of care.

"I think that's what's most demoralizing is that we know we could do better if we had more resources, more staff, and not this flood of patients," she added.

Bettencourt added that if there are any healthcare workers who are hesitant about the vaccine that they should talk to a nurse they trust.

"Nurses have been the most trusted profession for the last 19 years," she said. "So if you know a nurse, and someone you trust is a nurse, have a conversation with them about vaccination. We are hoping that people can actually trust us to be accurate, and a good source of information in this age of misinformation."

Bettencourt said the future of healthcare depends on what happens now.

"People choosing to be vaccinated or not affects whether we're going to have a healthcare system able to meet our needs when we have health emergencies going forward," she said.