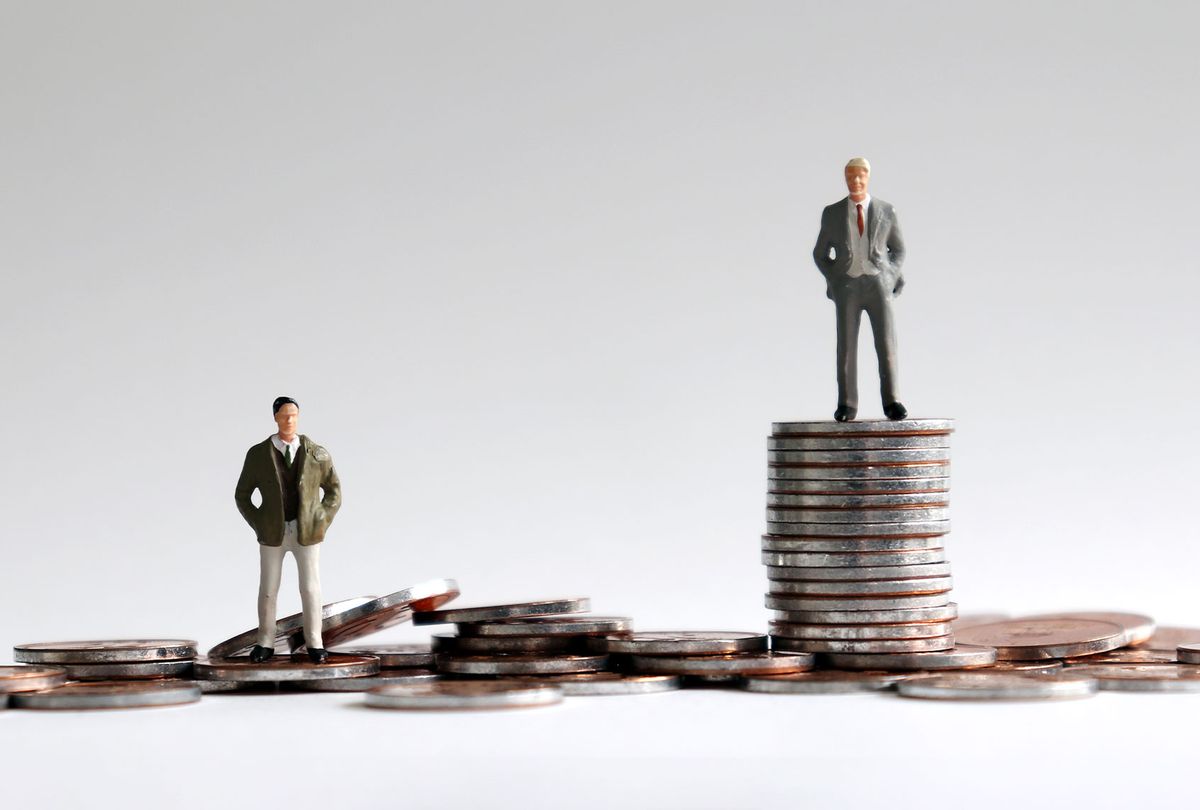 Miniature people standing on a pile of coins (Getty Images)
--

It's well known, at least among tax lawyers and accountants for the ultrawealthy: The estate tax can be easily avoided by exploiting a loophole unwittingly created by Congress three decades ago. By using special trusts, a rarefied group of Americans has taken advantage of this loophole, reducing government revenues and fueling inequality.

There is no way for the public to know who uses these special trusts aside from when they've been disclosed in lawsuits or securities filings. There's also been no way to quantify just how much in estate tax has been lost to them, though, in 2013, the lawyer who pioneered the use of the most common one — known as the grantor retained annuity trust, or GRAT — estimated they may have cost the U.S. Treasury about $100 billion over the prior 13 years.

As Congress considers cracking down on GRATs and other trusts to help fund President Joe Biden's domestic agenda, a new analysis by ProPublica based on a trove of tax information about thousands of the wealthiest Americans sheds light on just how widespread the use of special trusts to dodge the estate tax has become.

More than half of the nation's 100 richest individuals have used GRATs and other trusts to avoid estate tax, the analysis shows. Among them: former Democratic presidential candidate Michael Bloomberg; Leonard Lauder, the son of cosmetics magnate Estée Lauder; Stephen Schwarzman, a founder of the private equity firm Blackstone; Charles Koch and his late brother, David, the industrialists who have underwritten libertarian causes and funded lobbying efforts to roll back the estate tax; and Laurene Powell Jobs, the widow of Apple founder Steve Jobs. (Powell Jobs' Emerson Collective is among ProPublica's largest donors.)

More than a century ago amid soaring inequality and the rise of stratospherically wealthy families such as the Mellons and Rockefellers, Congress created the estate tax as a way to raise money and clip the fortunes of the rich at death. Lawmakers later added a gift tax as a means of stopping wealthy people from passing their fortunes on to their children and grandchildren before death. Nowadays, 99.9% of Americans never have to worry about these taxes. They only hit individuals passing more than $11.7 million, or couples giving more than $23.4 million, to their heirs. The federal government imposes a roughly 40% levy on amounts above those figures before that wealth is passed on to heirs.

For her part, Powell Jobs has decried as "dangerous for a society" the early 20th century fortunes of the Mellons, Rockefellers and others. "I'm not interested in legacy wealth buildings, and my children know that," she told The New York Times last year. "Steve wasn't interested in that. If I live long enough, it ends with me."

Nonetheless, after the death of her husband in 2011, Powell Jobs used a series of GRATs to pass on around a half a billion dollars, estate-tax-free, to her children, friends and other family, according to the tax records and interviews with her longtime attorney. By using the GRATs, she avoided at least $200 million in estate and gift taxes.

Her attorney, Larry Sonsini, said Powell Jobs did this so that her children would have cash to pay estate taxes when she dies and they inherit "nostalgic and hard assets," such as real estate, art and a yacht. (At 260 feet, Venus is among the larger pleasure ships in the world.) Without the $500 million or so passed through the trusts, he said, Powell Jobs' heirs would have to sell stock that she intends to give to charity to pay her estate tax bill.

Sonsini said Powell Jobs, whose fortune is pegged at $21 billion by Forbes, has already given billions away to charity and paid $2.5 billion in state and federal taxes between 2012 and 2020. "When you look at an estate that may be worth multiple billions, and all the rest is going to charity, and you put it in perspective, what is the problem we're worried about here?" Sonsini asked. "This is not about creating dynasty wealth for these kids."

In a written statement, Powell Jobs said she supports "reforms that make the tax code more fair. Through my work at Emerson Collective and philanthropic commitments, I have dedicated my life and assets to the pursuit of a more just and equitable society."

Others whose special trusts ProPublica identified, including Bloomberg and the Kochs, declined to comment on why they'd set up the trusts or their estate-tax implications. Representatives for Lauder didn't respond to requests to accept questions on his behalf. Schwarzman's spokesperson wrote that he is "one of the largest individual taxpayers in the country and fully complies with all tax rules."

A typical GRAT entails putting assets, like stocks, in a trust that ultimately benefits a person's heirs. The trust pays back an amount equal to what the trust's creator put in plus a modest amount of interest. But any gains on the investments above that amount flow to the heirs free of gift or estate taxes. So if a person puts $100 million worth of stock in a GRAT and the stock rises in value to $130 million, their heirs would receive about $30 million tax-free.

In 1990, Congress accidentally created GRATs when it closed another estate tax loophole that was popular at the time. The IRS challenged the maneuver but lost in court.

"I don't blame the taxpayers who are doing it," said Daniel Hemel, a professor at the University of Chicago Law School. "Congress has virtually invited them to do it. I blame Congress for creating the monster and then failing to stop the monster once it became clear how much of the tax base the GRAT monster would eat up."

Users of the trusts extend well beyond the top of the Forbes rankings, ProPublica's analysis of the confidential IRS files show. Erik Prince, founder of the military contractor Blackwater and himself heir to an auto parts fortune, used the shelter. Fashion designer Calvin Klein has used them, as have "Saturday Night Live" creator Lorne Michaels and media mogul Oprah Winfrey.

"We have paid all taxes due," a spokesperson for Winfrey said. A representative of Klein did not accept questions from ProPublica or respond to messages. A spokesman for Michaels declined to comment.

Prince also did not answer questions. "Hey if you publish private information about me I'll be sure to return the favor," he wrote. "Go ahead and fuck off."

The GRAT has become so ubiquitous in recent decades that high-end tax lawyers consider it a plain vanilla strategy. "This is an off-the-shelf solution," said Michael Kosnitzky, co-leader of the private wealth practice at law firm Pillsbury Winthrop Shaw Pittman. "Almost every wealthy person should have one."

ProPublica's tally almost certainly undercounts the number of Forbes 100 members who use shelters to avoid estate taxes. ProPublica counted only those people whose tax records or public filings explicitly mention GRATs or other trusts commonly used to dodge gift and estate taxes. But a wealthy person can call their trusts whatever they want, leaving plenty of trusts outside of ProPublica's count.

This month, the House and Senate are hammering out proposals to raise revenue to help pay for the Biden administration's plans to expand the social safety net. The legislative blueprint released by House Ways and Means Committee Chairman Richard Neal, D-Mass., would defang GRATs and other trusts, which would still be legal but no longer be as useful for estate tax avoidance. If the provision makes it into law, "it would put a major dent in GRATs," said Bob Lord, an Arizona attorney who specializes in trusts and estates.

Senate Budget Committee Chairman Bernie Sanders, I-Vt., has proposed going further in undercutting estate tax avoidance tools. But the prospect of any reform is uncertain, as Democrats on Capitol Hill struggle to find the votes to pass the package of spending and tax changes.

GRATs are commonly described by tax lawyers as a "heads I win, tails we tie" proposition. If the investment placed in the GRAT soars in value, that increase passes to an heir without being subject to future estate tax. If the investment doesn't go up, the wealthy person can simply try again and again until they succeed, leading many users to have multiple GRATs going at a time.

For example, Herb Simon, founder of the country's biggest shopping mall empire and owner of the Indiana Pacers, was one of the most prolific GRAT creators in records reviewed by ProPublica. Since 2000, he has hatched dozens of the trusts, often more than one a year. In an interview with The Indianapolis Star in 2017, the octogenarian Simon said, "It's always a big tax problem" for the next generation when someone dies, "but we've worked that tax problem. We won't have a problem with that."

A spokesperson for Simon didn't respond to questions for this article.

Mentions of these trusts have periodically surfaced in the press after being disclosed in securities filings, as was the case with trusts held by Facebook co-founders Mark Zuckerberg and Dustin Moskovitz and Chief Operating Officer Sheryl Sandberg. In 2013, Bloomberg News published a groundbreaking series on GRATs, mining securities filings and other records to reveal how the mega-rich, including casino magnate Sheldon Adelson and such families as Walmart's Waltons, had perfected the use of the device.

ProPublica's data shows that Michael Bloomberg, the majority owner of the company that bears his name and No. 13 on Forbes' list of the wealthiest Americans, is himself a heavy user of GRATs. Over the course of a dozen years, he repeatedly cycled pieces of his private company in and out of the trusts — often opening multiple GRATs in one year. During that time, hundreds of millions of dollars in income flowed through Bloomberg's GRATs, giving him opportunities to shield parts of his fortune for his heirs.

ProPublica described the transactions (but not the name of the person engaging in them) to Lord, the trusts and estates attorney. The GRAT is "the perfect loophole to avoid estate and gift tax in this situation," said Lord, who is also tax counsel for Americans for Tax Fairness and an advocate for estate tax reform.

When Bloomberg ran for president in 2020, he vowed to shore up the estate tax. "Owners of the biggest estates are expert at gaming the system to reduce what they owe," a campaign fact sheet for his tax plan said. Bloomberg vowed to "lower the estate-tax threshold, so that more estates are taxed," and to "shut down multiple estate-tax avoidance schemes." His fact sheet offered few details as to how he would do that, and it didn't mention GRATs.

The legislation Congress is now considering to curtail GRATs would leave open other options for estate tax avoidance, including a cousin to the GRAT known as a charitable lead annuity trust, or CLAT, which contributes to charity while passing gains from stocks and other assets on to heirs. And the legislation would grandfather in existing trusts, meaning that those who have already established trusts would be able to continue to use them to avoid paying estate taxes.

That has set off a predictable push by tax lawyers to get their clients to create tax-sheltering trusts before any new legislation takes effect.

Porter Wright, a law firm that offers estate planning services, told existing and potential clients it was "critical" to evaluate opportunities because "the window may close very soon. There are important and time sensitive issues which could substantially impact the amount of wealth you are able to transfer free of estate and gift tax to future generations."