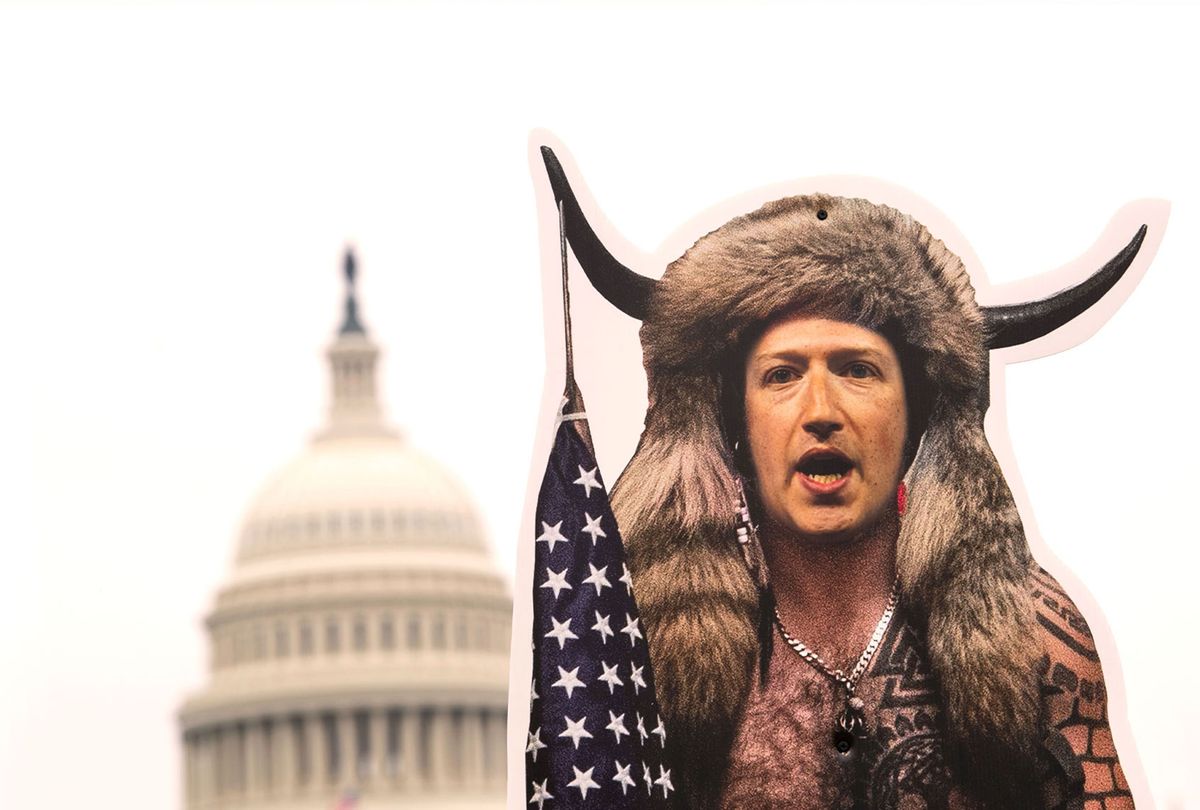 A cardboard cutout of Mark Zuckerberg, CEO of Facebook, dressed up as the QAnon Shaman, along with other cutouts of people involved in the Capitol insurrection, stand on the National Mall ahead of the House Energy and Commerce Subcommittee on Communications and Technology and the Subcommittee on Consumer Protection and Commerce joint hearing on Disinformation Nation: Social Media's Role in Promoting Extremism and Misinformation in Washington on Thursday, March 25, 2021. The cutouts were placed by the group SumOfUs as an attempt to highlight the role Facebook and other social media organizations played in the Capitol insurrection. (Caroline Brehman/CQ-Roll Call, Inc via Getty Images)
--

There's been a steady drip of revelations for some time now about how much damage Facebook has known its various social media platforms are doing and how little they have done in response. On Sunday, the source of much of this information finally revealed herself on "60 Minutes." Frances Haugen worked for Facebook's "civic integrity" division, a job she says she took because fighting dangerous conspiracy theories was important to her. But she says Facebook wasn't interested in shutting down disinformation at all. Instead, the company sought the appearance of taking the problem seriously while doing as little as possible to interrupt the flow of lies, conspiracy theories and right wing propaganda. The reason, according to Haugen, is simple: Pure profit motive.

"There were conflicts of interest between what was good for the public and what was good for Facebook," Haugen told Scott Pelley. "And Facebook, over and over again, chose to optimize for its own interests, like making more money."

Haugen carefully documented all the ways Facebook demonstrated internally that they knew their platform was a conduit for right wing disinformation and ultimately did as little to stop it as they could get away with. As Haugen explained, the reason was not because of some sinister plot to make America more fascist, but "the incentives are misaligned," because people "enjoy engaging with things that elicit an emotional reaction." The more anger they get exposed to, she argued "the more they interact and the more they consume," leading to more money for Facebook.

This is true across the board, of course. Anyone who spends time on the social media feeds of progressives can see how outrage drives traffic, and unfortunately leads to a lot of people grandstanding for attention, even if doing so means ginning up outrage over objectively stupid controversies. Competitive outrage is a weakness that appears to be widespread among human beings.

But when it comes to the specific problem of disinformation fueling performative umbrage-taking, then there's no contest between left and right. Right wing lies proliferate far faster than anything the left could even imagine. Research shows that "more engaging but false stories tended to support beliefs held by conservatives, while viral news stories that were also true tended to support beliefs held by liberals," as CNN reported in June. Repeated analyses of fake news spread about the 2016 election shows "most of the fake news was favorable to then-candidate Donald Trump," U.S. News & World Reported explained.

On any given day, the Facebook Top 10 Twitter feed shows that the most popular Facebook posts of the day heavily favor right wing sites that are heavily committed to perpetuating right wing notions rooted in disinfo, such as anti-vaccine sentiment or claims that the 2020 election was illegitimate.

Most people — especially liberals, journalists and Democratic politicians — have a mental model of how disinformation functions that is all wrong. The assumption is that audiences are passive vessels, wide-eyed innocents who are being taking advantage of, due to their gullibility. People are described as being "susceptible" to misinformation and disinformation because of an assumed lack of education, or other factors like being older and less internet-savvy that are believed to make them less able to tell the difference between good information and bad information, especially online. Fixing the problem certainly would be a lot easier if that were true.

But Facebook allows disinformation to proliferate because doing so makes them money. This complicates the entire situation. Disinfo is everywhere because of old-fashioned market demand. Ordinary people, especially conservatives, crave lies and actively seek out and reward those who will feed them the lies they so dearly desire. The consumers of disinformation are not innocent victims being exploited for their naivete. They are complicit actors, sharing and driving up demand for lies, because doing so helps them further their goal of undermining American democracy.

This is something that journalist Brooke Binkowski of the website Truth or Fiction is constantly trying to hammer home: Disinformation is permission, not persuasion.

That means people seek out and repeat fake news and other disinformation because it helps them recommit to their pre-existing beliefs. They may even be fully aware that what they're reading and sharing isn't true. Ultimately, they don't care. The mere fact that the disinfo is already out there circulating is, in itself, a form of social permission: If other people are lying to advance their political goals, Facebook users can believe it's OK for them to engage with and promote the lie as well. That's why figures like Mike Lindell will tell lies that are so outrageous that it's unlikely anyone believes them, such as the claim that nearly three times as many people who voted for Trump will demand his reinstatement. Often, the ridiculousness of the lie is the point. It helps conservatives detach from a lingering fondness for facts, and commit wholly to a strategy of lying their way into power.

Market demand also helps explain why Fox News has gone all-in on spreading anti-vaccine sentiment. Partially it's because the network is committed to putting Republicans in power, and the hosts clearly see prolonging the pandemic as bad for Biden's presidency. But it's also about money. As Roger Sollenberger and Asawin Suebsaeng of the Daily Beast recently reported:

One Fox News insider succinctly described the anti-COVID-mandate segments and vaccine-resistant commentary as "great for ratings." Another current Fox employee said the numbers clearly demonstrated that there are vanishingly fewer subjects these days that get "our viewers more excited or engaged than" those kinds of segments.

None of which is to say that the criticisms of Facebook for allowing disinformation to spread are misplaced, or that Haugen is wasting her time. As the January 6 riot and widespread vaccine refusal both show, disinfo campaigns can cause serious damage. Indeed, if disinformation wasn't powerful, it's unlikely that people would engage in it at all.

But it's important to understand that power of disinformation comes not from fooling people, but rather from stirring them up and creating a social permission to become ever worse versions of themselves. Fighting the problem means understanding it. Disinfo wouldn't work if there was no audience for it. It's part of a larger problem, in which huge numbers of Americans are excited to embrace fascism and are just looking for an excuse — even if it's based on a bunch of obvious lies — to go there. Cleaning up social media is necessary. But that can be only one part of the more comprehensive solution we clearly need for the growing problem of American authoritarianism.