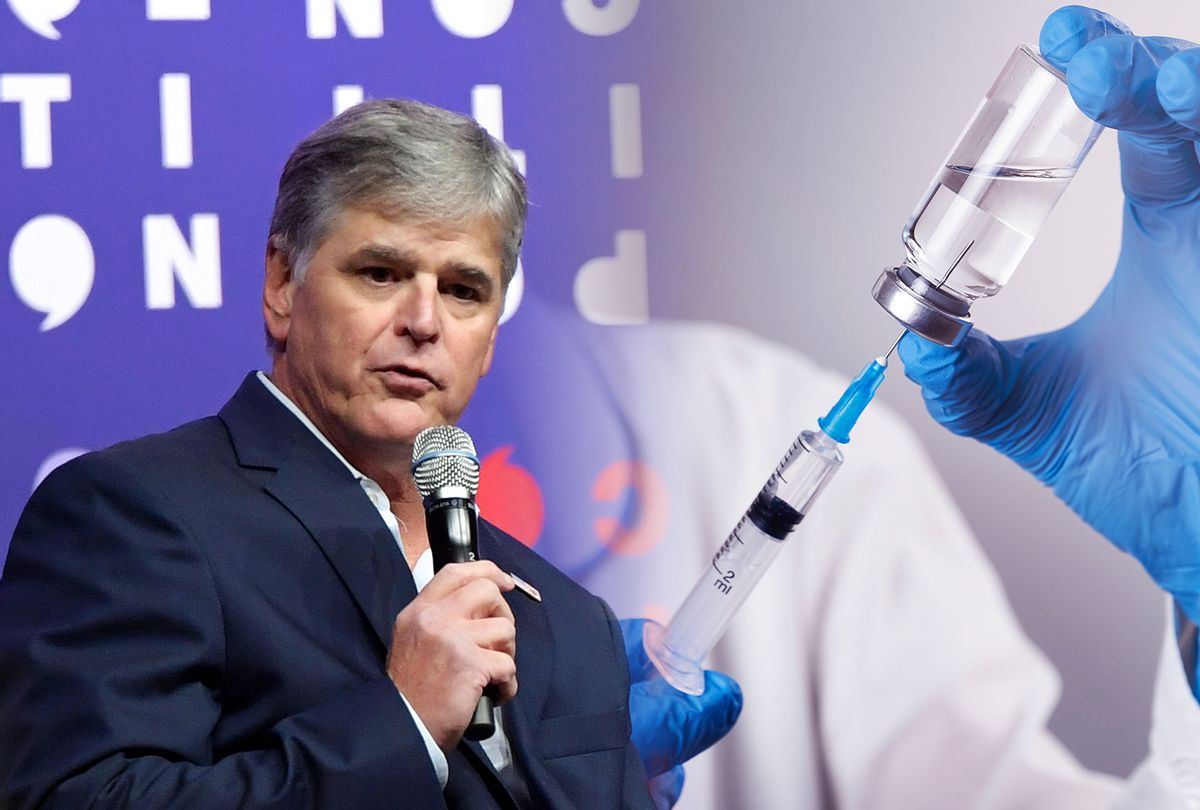 I am sorry to report I've had more than one conversation with progressives who, despite being savvy and well-read, are under the mistaken impression that Fox News has seen the light and has started to promote the COVID-19 vaccine. I've even witnessed speculation that Rupert Murdoch, who is himself vaccinated, had a come-to-Jesus meeting with the Fox News brass about the wisdom of encouraging their own audience to contract a dangerous disease. And while I always enjoy a cheeky opportunity to tell folks they should be reading my work more, overall, it's distressing to see that people are buying into the myth that Fox News has "pivoted" to being pro-vaccine.

But can you blame folks for believing this? Someone who prides themselves on a responsible, fact-based diet of mainstream media sources like CNN, NBC News and NPR likely got exposed in mid-to-late July to misleading stories hyping an out-of-context clip of Fox News host Sean Hannity saying, "I believe in the science of vaccination" and urging viewers to "take COVID seriously." The clip also got shared widely on social media.

Everyone likes a "scared straight" story, and it just felt good to believe conservatives were on the verge of giving up this anti-vaccination nonsense. Unforutantely, the story was B.S.

As I and reporters who cover right wing media for Media Matters and Vox pointed out at the time, Hannity's show that night was not only bookmarked by two other shows — Laura Ingraham's and Tucker Carlson's — that openly discouraged vaccination, but his supposedly "pro-vaccine" comments came in the middle of a segment that overall portrayed vaccines as dangerous and a threat to freedom. Even in the edited clip, Hannity instructed his viewers to "research like crazy," which is a common anti-vaxx rhetorical trick. As with creationists claiming they want to "teach the controversy," it's a way to seem reasonable while slyly directing people to engage conspiracy theories and suggesting those conspiracy theories are on equal footing, credibility-wise, as scientific fact. As Michael Hiltzik of the Los Angeles Times wrote, Hannity was basically "encouraging listeners to expose themselves to the wide variety of anti-vax conspiracy mongering accessible on social media via 'research.'"

But in case there was any doubt, a perusal of Hannity's programming in the weeks since his supposed conversion shows that, actually, Hannity is still largely focused on stoking confusion, spreading misinformation, and portraying vaccination efforts as a liberal conspiracy against his audience. As Media Matters documented on Tuesday, Hannity gave an entire hour of his radio show over to two anti-vaccine conspiracy theorists — men who use phrases like "the demon needle" and "poisonous jabs." Hannity presented them falsely as medical experts to people calling in looking for advice. He also sneered at Dr. Anthony Fauci, President Joe Biden's chief medical advisor, calling him "flip-flop Fauci" and declaring that his anti-vaccine conspiracy theorists were better experts. The conspiracy theorists discouraged vaccines for young people, implied that dangerous and unproven drugs are superior prevention to the vaccine, and lied about the breakthrough infection rate, implying it's high when it is not.

This in in line with the general approach to the vaccine question on Hannity's show. From the moment that his misleading "pro-vaccine" clip went viral, Hannity has aggressively downplayed the claim that he's promoting the vaccine, declaring two days after the initial clip that, "I'm not urging people to get the COVID-19 vaccine" and "I have never told anyone to get a vaccine." In the past few weeks, he's attacked vaccine passport programs, portrayed vaccine advocacy as "threats coming from Democrats," exaggerated the risks of breakthrough infections, and even claimed that vaccine passport programs are racist against Black people. (In reality, Black people are at a higher risk of dying of COVID-19, which is one reason why aggressive public health measures are necessary.)

A visit to Hannity's Facebook page is more of the same. It features a post mocking New York City mayor Bill De Blasio for supposedly playing doctor by instituting a vaccine passport system, Blames undocumented immigrants for the COVID-19 spread when the medical establishment is quite clear that the problem is willfully unvaccinated people, and celebrates Florida's Republican Gov. Ron DeSantis, who is selling merchandise mocking vaccine advocates and whose state is paying the price for his idiocy with some of the highest rates of COVID-19 in the country.

Overall, Hannity viewers get a strong message that vaccines are ineffective, dangerous, and getting one is just giving into those damn Democrats. And his firehose of anti-vaccination demagoguery is in line with the rest of Fox News, which continues to take the stance that vaccines are "a menace", ineffective, and that refusing vaccination is a good way to prove one's right wing bona fides.

And yet, this notion that the network has changed its tune has become received wisdom in much of the mainstream media.

Googling "Hannity vaccines" turns up a darkly funny mix of Fox News headlines demonizing vaccination and mainstream media headlines praising Fox News for being pro-vaccination. One of those more recent ones, from Morning Consult, even announces, "Fox News Personalities Started to Promote COVID-19 Vaccines. Viewers Have Taken Notice." The article declares that "some conservative media personalities have gone all in on vaccines," falsely citing Hannity as an example. It credits this supposed shift in messaging for the fact that vaccine "reluctance fell to an all-time low this week among adults who watch Fox News: 27 percent of viewers now say they probably or definitely won't get vaccinated, down from 30 percent the week before and a high of 37 percent in mid-March." That's certainly an improvement, but hard to say if Fox News is really the cause, since their much-ballyhooed "shift" is an illusion propped up to bamboozle the mainstream media and not actually representative of the vaccine-negative messaging their audience actually gets. The comments from his fans on Facebook make quite clear what message they're getting, and it's definitely not that vaccination is good and that unvaccinated people are the cause of the current surge. Instead, it's fear-mongering about the shots, blaming immigrants and not the unvaccinated, and comparing vaccine passports and mandates to Nazi Germany.

As the New York Times reports, fears of the delta variant are also driving a lot of red state Americans to get the shot, clearly deciding that sticking it to the liberals isn't worth getting sick over. The article also points out that "employers and universities have started requiring the shots to return to work and class." Even the phrase "pandemic of the unvaccinated," which is being heavily (and accurately) promoted by the White House and the Centers for Disease Control, likely deserves credit for underscoring to the unvaccinated that it's they, not hated liberals, who are paying the price for listening to Fox News.

So this is probably not a matter of one pro-vaccine Hannity clip in a sea of anti-vaccine messaging changing minds. It's just that even the most devout death cults eventually have some members who start to question the wisdom of sacrificing themselves for some dumb ideology. Let's hope that the number of Fox News fans deciding they have their limits only continues to rise.