Why Republicans suddenly seem to be taking COVID seriously

Vaccine advocacy from Hannity and McConnell gets the media off Republicans' backs, but won't shift public sentiment 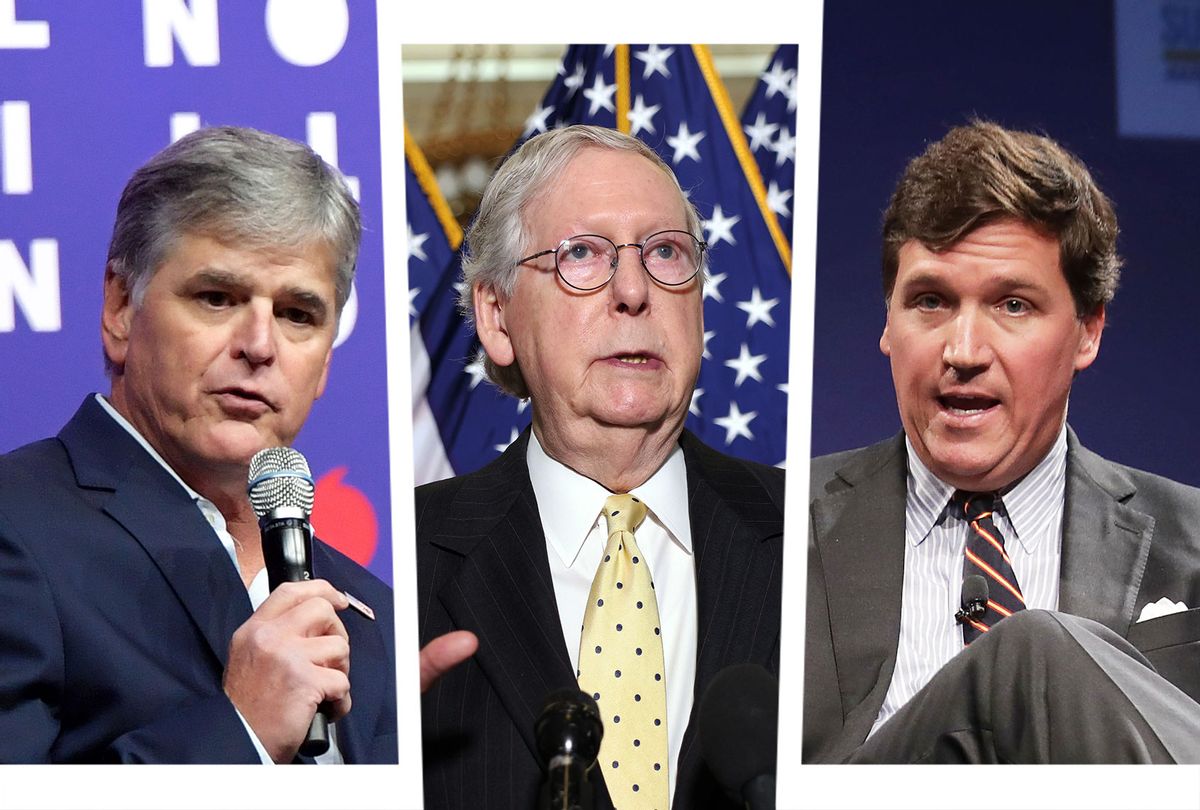 Amid a rising media furor over the steady stream of vaccine disparagement from GOP politicians and Fox News talking heads, a number of prominent Republicans spoke up in favor of vaccines early this week.

On Tuesday, Senate Minority Leader Mitch McConnell told reporters, "shots need to get in everybody's arm as rapidly as possible" and asked that people "ignore all of these other voices that are giving demonstrably bad advice." House Minority Whip Rep. Steve Scalise of Louisiana, got the vaccine after months of delay and then publicly said, "there shouldn't be any hesitancy over whether or not it's safe and effective." And Fox News host Sean Hannity, in a widely shared video, declared, it "absolutely makes sense for many Americans to get vaccinated." This was treated in the press as an unequivocal endorsement, even though the use of the word "many" was clearly meant to let the Fox News viewers feel like he's talking about other people getting vaccinated.

Is this an exciting pivot among the GOP elites?  Are they abandoning the sociopathic strategy of sabotaging President Joe Biden's anti-pandemic plan by encouraging their own followers to get sick? Are the millions of Republicans who keep telling pollsters they will never get that Democrat shot going to change their minds now?

All this shows is that GOP politicians and pundits still know how to manipulate the mainstream press's endless desire to believe the Republicans aren't really as bad as the #resistance tweeters are saying. But while clips of prominent Republicans saying pro-vaccine stuff might be enough to get the press off their backs — or keep Biden from accusing them of "killing people," as he did (correctly) to Facebook — it won't be enough to actually get vaccine-hostile Republican voters to change their minds. Indeed, this should be understood more as a P.R. move to quell press criticism than a sincere effort to get reluctant people to get vaccinated.

Unlike most journalists — who merely watch clips from Fox News, often ones pre-selected for them by the Fox News P.R. team — Matt Gertz at Media Matters and Aaron Rupar at Vox actually put in the miserable work of watching entire shows on the network. And both reported on Tuesday that, despite the hype around Hannity's viral clip, the overall tenor of Fox News this week has still been that getting the vaccine is a very bad thing that no red-blooded Republican worth his MAGA hat should ever do. Indeed, the out-of-context Hannity clip comes from an episode that was overall anti-vaccine. The Hannity clip "came in the middle of a segment in which he railed against colleges and universities that are requiring their students to get their shots," Gertz writes. He also points out that Hannity's show "is bracketed between those of Carlson and Laura Ingraham," and both of those hosts went hard on the vaccines-are-terrible-and-doctors-are-lying-to-you messaging.

Here are some screenshots from the program before Sean Hannity's viral vaccine monologue last night. pic.twitter.com/YRjZz4B42I

Here are some screenshots from the program after Sean Hannity's viral vaccine monologue last night. pic.twitter.com/LgkVQqWaF8

As Rupar points out, "the viral clip of Hannity talking about vaccines came immediately before he pivoted to a story about a college athlete who was temporarily paralyzed after she took a different sort of vaccine in 2019."

Similarly, Fox morning host Steve Doocy got good press for encouraging vaccines, but, as both Rupar and Gertz point out, it was in a segment where his co-host Brian Kilmeade framed vaccine refusal in terms of "freedom" and told viewers "make your own decision." The actual message one gets from watching the whole segment: People who get vaccines are sheep, and "free" people who make their own decisions can prove it by refusing the vaccine. So while liberals and journalists were swooning over Hannity's supposedly reasonable tone from the clip they saw on Twitter, actual Fox News viewers were getting a very different message: Vaccines are dangerous and evil and unpatriotic and don't you dare get the COVID-19 shot.

Pro-vaccine messages from Republican politicians should be taken with a similar grain of salt.

McConnell's words mean nothing to the GOP base, which he likely understands. After all, he's hardly a popular figure with the base, like Donald Trump or their beloved Fox News pundits. He's mostly viewed in GOP circles as a charisma-free villain who is good for obstructing Democrats, but not exactly someone people swoon over. Where McConnell has real power is as the leader of the Republican caucus in the Senate. On that front, he appears to be doing nothing to improve the situation. He's well aware of prominent members of his caucus are out there, stoking conspiracy theories and discouraging vaccination. He seems wholly uninterested in doing anything substantive to discourage the behavior. Indeed, the junior senator from his home state of Kentucky, Sen. Rand Paul, is one of the most prominent COVID-19 minimizers on Capitol Hill. While McConnell was giving his limp pro-vaccine statements, Paul was getting into a far more exciting tiff with top Biden health advisor Dr. Anthony Fauci during a Senate hearing. It's quite likely Republicans understand that clips that can be used to demonize Fauci — and therefore demonizing the vaccine Fauci promotes — will likely get a lot more interest from the GOP base than anything McConnell has to say.

Indeed, this looks very much like a two-pronged strategy, where the Beltway press gets a "GOP loves the vaccine" message, while the actual base is still getting blasted with a "vaccines are bad" message. Scalise getting the shot is part of this. Scalise is famous to journalists since he's the second-highest-ranking Republican in the House. But most of the GOP base probably couldn't pick him out of a crowd, even after being reminded he was the guy that was shot by the unhinged Bernie Sanders supporter in 2017. So while it's a very big deal to the Beltway press that Scalise is getting Pfizered, the typical GOP voter will neither know nor care.

The good news is that some in the mainstream press are suspecting this might be more of the usual GOP media manipulation.

After an initial bout of gushing praise for this supposed "pivot," some of the coverage has noticeably shifted in a more skeptical direction. CNN's Reliable Sources newsletter noted that while as "optimist might say, innocently, that the Fox machine is raising awareness about vaccines," a "cynic might say that Fox is trying to score PR points." (And only fools fail to be cynics when it comes to Fox News coverage.) The New York Times headlines Wednesday morning highlighted that "G.O.P. Lawmakers Allow Vaccine Skepticism to Flourish" and the "mixed messages" on Fox News.

Unfortunately, the Washington Post is still going with the credulous headline, "Growing number of Republicans urge vaccinations amid delta surge." The rhetoric is portrayed as a "shift," even though there's no evidence that the most popular anti-vaccination voices out there have any intention of backing down, much less admitting they were wrong.

This is almost certainly not a "shift." It is mostly an ass-covering exercise by Republicans who want to confuse the press about who, exactly, is to blame for the low rates of vaccinations among GOP voters. Journalists should not be snookered by this. It's very unlikely we'll see a sudden spike in vaccination rates, which is what would happen if the "Republicans get vaccinated now" message was actually getting through to the people who need to hear it. Instead, we'll likely see the rate stay steady or even continue to decline.

I hope that I'm wrong, of course. Still, Republican voters may be rubes, but they are better at interpreting "mixed messages" from GOP elites than the press is, and they know they're meant to hear the anti-vaccine messages while disregarding the pro-vaccine ones. Republican elites haven't suddenly grown a heart. It's just a lot harder to pin the blame for the continuing pandemic on Biden if the press is, correctly, blaming Republicans for it. What we're seeing is likely just Republicans getting the media off their scent, and not a move that will do much, if anything, to get more shots in arms.