In HBO Max's "The Way Down," one evangelical church preaches dieting as the way to salvation 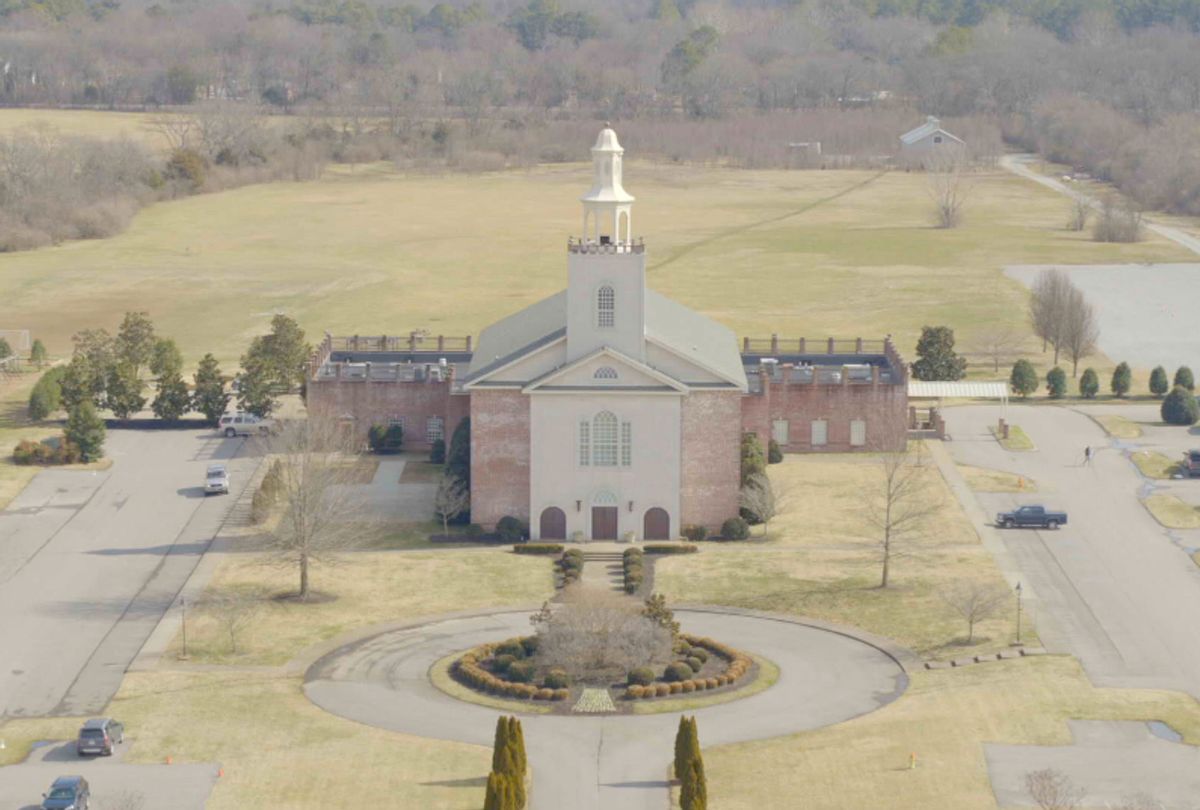 Remnant Fellowship Church in ﻿"The Way Down" (HBO ﻿Max)
--

"We just thank you for this teaching that has given us freedom, and kept our weight off after all this time, God," says one of the women praying on her knees in the opening of new HBO Max docuseries "The Way Down."

The series follows Gwen Shamblin Lara's rise as an evangelical preacher through archival footage, depositions and interviews with former members of Remnant Fellowship Church, which she founded. The documentary's full title – "The Way Down: God, Greed, and the Cult of Gwen Shamblin" – makes it clear that this is not the typical exposé of an evangelical church. Here, diet culture prevails.

But before delving into that peculiar aspect of the church, one other detail makes this story particularly fascinating right now. Shamblin Lara died unexpectedly in May at age 66 in a plane crash shortly after takeoff.

That grim turn of events had an unforeseen effect on "The Way Down," which opens with footage of the search and rescue team sent out after Shamblin Lara's private jet crashed into Percy Priest Lake in Tennessee, killing her and five other church members aboard. And although director Marina Zenovich never was able to interview her subject for the series directly, many of those who were afraid to speak out about their experiences with Remnant Fellowship while Shamblin Lara was alive have now come forward. This sparked the need for two more episodes of the series, which will follow in 2022.

For now, HBO Max has released the first three episodes, which go into detail about the ways that Remnant Fellowship controlled former members, including allegations of child abuse and, in one case, accusations of the killing of one child by his parents. There's behavior that the series characterizes as cultlike, such as mega worship services with a charismatic leader, whom people both love and fear. But throughout the series, one of the oddest themes is of Shamblin Lara's obsession with the weight of her followers.

Shamblin Lara, who's recognizable for her gravity-defying teased hair, earned a Masters in food and nutrition and was a registered dietitian who worked with the Tennessee Department of Health for five years. She put a twist on the usual weight loss approaches by developing her Christian diet program called the Weigh Down Workshop, which proposes that devotees can lose weight through belief in God. While some would see this as a more spiritual departure from diets that usually focus on physical and behaviorial approaches, the patriarchal aspects of evangelical teachings begin to reveal themselves.

The basic principles of Weigh Down are supposedly portion control (hardly a revolutionary diet strategy), and dedicating the rest of the time to prayer instead of thinking about food. Throughout the series, we see former members describing their experiences with Weigh Down that go beyond merely prayer: one is told to fast even after losing over 100 pounds. Another remembers asking her husband for permission to order Starbucks, and being told she could have that or dinner. Another fasted for 40 days.

In one archival video, Shamblin Lara sits in a white dress with huge gold hoops in her ears.

"God revealed to me that this is the true deliverance," she coos, "and that the key to permanent weight control is a matter of the heart."

More footage shows women proudly holding up pants that no longer fit them, similar to before and after ads for services like Jenny Craig or Weight Watchers.

Then Shamblin Lara's teachings go further: the congregation at Remnant is told that a thin body means you are "right with God." This meant that the overweight among the congregation were doing something wrong, that the people putting weight back on after losing it were clearly not in God's good graces (and presumably this means they're on "the way down" in the afterlife). To Shamblin Lara, the faster you lost weight, the holier you were. As one former member put it, if you weren't skinny, you weren't saved. "It was all about salvation. Nothing to do with Jesus Christ, it was about being thin."

This intersection of faith and diet culture is a twisted version of the world of juice cleanses and intermittent fasting in mainstream culture. Replace the negative language Remnant uses to describe plus-sized people with words like "lazy" , "weak-willed", or "unintelligent."Replace the "fear of God" as the motivator of the Weigh Down Workshops with "nothing tastes as good as skinny feels." The stigma surrounding plus-sized people is the same, repackaged in a way that the believers of Remnant understand.

Fatphobia plagues the way that we as a society operate. It's a normalized structure that if you don't look a certain way, you can't find clothes that fit, or be comfortable on an airplane, or access proper medical care.  According to the National Association of Anorexia Nervosa and Associated Disorders, 28.8 million Americans will struggle with an eating disorder in their lifetime.

Throughout the series it's shown how Shamblin Lara used the language of manipulation present in many alleged cults to control believers. She tailored her teachings to an audience of the faithful by having them believe that the message she spread was one communicated to her by a higher power. She told her congregants that people in Weigh Down who were not a part of Remnant were gaining weight back from not being a part of the true religion she preached.

"The overarching theme of everything she ever taught in there was about being under God's authority, which was her." one former member says, "Everything fell around that. And then everything else was about the weight and what you looked like. . . . she was the voice from God."

"She beckoned to people," Reverend Rafael Martinez, a cult interventionist, says in the series. "She began to believe that the Weigh Down Workshop message was the answer to all the world's evils . . . Christian perfectionism could only be achieved by following her message." That version of perfection may have looked different from how mainstream society would view it in everything but its clothing size.

Groups that exhibit what is interpreted as cultlike behavioer are made entertaining in documentaries like "The Way Down" because their beliefs and actions are outside of the reality of the average viewer. And in many ways, the series hits all the right points of a good exposé: Anonymous talking heads in dark rooms. Footage of people crying in prayer. Laughter in how ridiculous it all is, now that the former members are out. Sadness when you realize that Remnant is still in operation, run by Shamblin Lara's daughter Michelle, with no sign of changing. But the thread of the Weigh Down Workshops and the way this belief of theirs reflects our own societal pressures ultimately humanizes Remnant.

Diet culture and fatphobia are so pervasive that they can even infiltrate the places we would least expect it. Members of Remnant aren't special for the way they interpret diet culture. In fact, they're just like us. It turns an unforgiving look at the viewer who would believe they're above cultlike fanaticism: if we're able to ingest certain beliefs about other people in our day to day, what's stopping us from taking that further? What would we believe next?

The first tree episodes of "The Way Down" are available now to stream on HBO Max, with two more releasing in 2022.