A new California oil spill is a pollution nightmare

More than 100,000 gallons of oil have leaked into the Pacific Ocean since Saturday 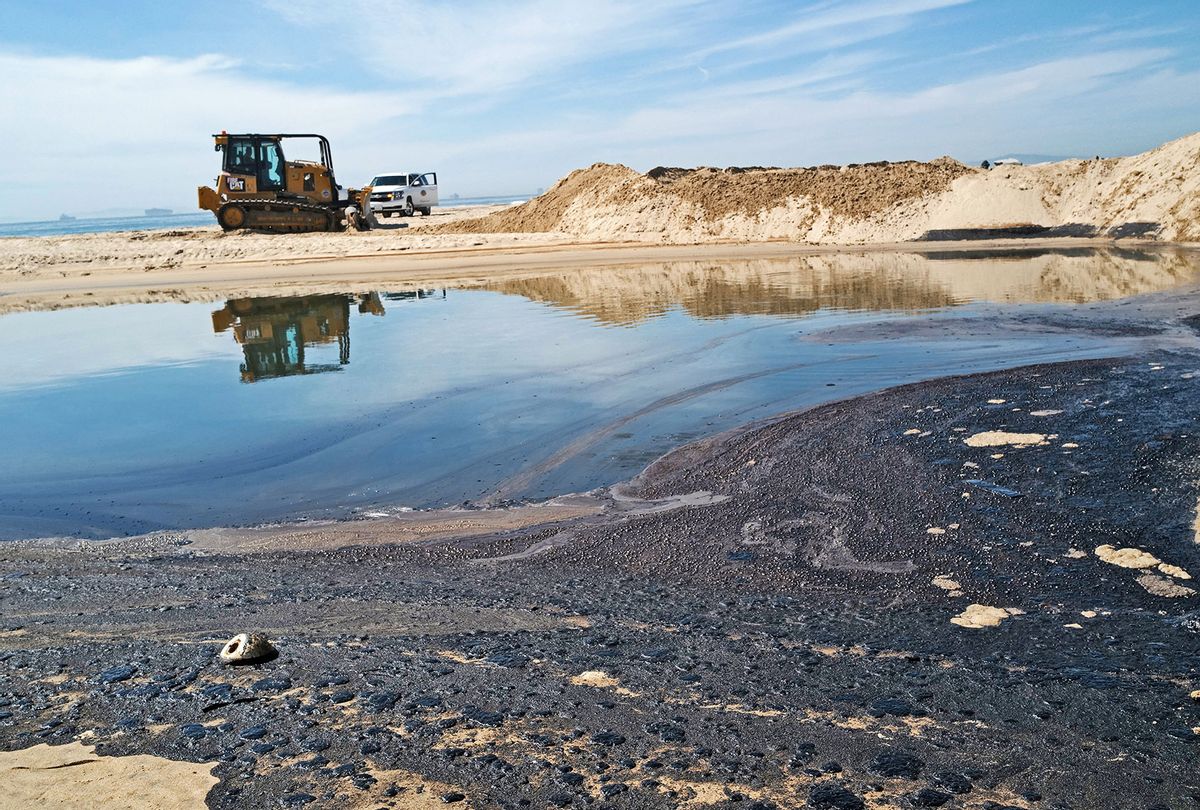 A bulldozer moves sand as oil is washed up on Huntington State Beach after a 126,000-gallon oil spill from an offshore oil platform on October 3, 2021 in Huntington Beach, California. The spill forced the closure of the popular Great Pacific Airshow with authorities urging people to avoid beaches in the vicinity. (Nick Ut/Getty Images)
--

On Saturday, a ruptured pipeline off the coast of southern California near Huntington Beach spewed around 144,000 gallons of oil into the Pacific Ocean. While the precise cause of the rupture was unclear, some speculate that the pipeline may have been struck by a ship's anchor. Amplify Energy, which owns the 17-mile pipeline, notified authorities about the spill more than 12 hours after an oil sheen was first noticed around the site of the accident. The leak has now stopped, but the oil slick stretches from Huntington Beach to Newport Beach and has already caused dead birds and fish to wash ashore.

According to Orange County Supervisor Katrina Foley, the oil has also entered the local wetlands. She lamented the damage to the wetland ecosystem.

"These are wetlands that we've been working with the Army Corps of Engineers, with the Land Trust, with all the community wildlife partners to make sure to create this beautiful, natural habitat for decades," Foley said. "And now in just a day, it's completely destroyed."

Foley's comments had their parallel in remarks by Newport Beach Mayor Brad Avery, who told Foley that he had spotted dolphins swimming through thick oil plumes. Foley speculated that the damage to local wildlife would be severe, telling reporters that "you can't get wildlife back that are killed in this process, and some of the habitat the plant species, they're going to be impacted for years to come."

The sense of outrage is not limited to either Foley, Avery and the fate of dolphins and wetlands.

"Big company doesn't invest in infrastructure," tweeted environmental activist Erin Brockovich. "Big company has a blow out. Big company gets sued. Lawyers get rich, people and the planet get screwed. Nothing f**king changes."

California Assemblyman Jared Huffman expressed a similar view, tweeting that "this is terrible but not surprising.  Where you drill you spill.  It's passed time to end our dirty, deadly, planet-killing addiction to fossil fuel."

One environmental activist expressed dismay at media reports that focused on the cancellation of a scheduled air show.

"People are prioritizing entertainment over the destruction of the natural world!" tweeted Alexandria Villaseñor, who described how being exposed to crude oil can damage your nerves or liver, cause chemical cancer or pneumonia, or result in a number of other serious health ailments. Villaseñor then added that "the next time someone is more worried about their own inconveniences or lack of entertainment because of a massive oil spill, tell them these things, or maybe just tell them they are part of nature too and what happens to the planet affects us all."

There are a number of health problems associated with oil spills for humans, as well as for the animals that suffocate or absorb poisonous chemicals. Those tasked with cleaning them up can experience skin or eye irritation. More broadly, anyone exposed to oil spills is at risk of liver damage, increased cancer risk, immune system issues, respiratory issues, reproductive issues and a higher presence of toxic substances in their bodies. These are only the known health problems: There is a dearth of studies that comprehensively catalogue long-term complications from being exposed to spilled crude oil.

Some reports raise questions about the timeline for public information release about the oil spill. As Sammy Roth of the Los Angeles Times reported, people in Huntington Beach and the surrounding area could smell oil on Friday night, but for most of Saturday were reassured by officials that there was only a small spill. That story did not change until Saturday night, when officials and Anthem acknowledged that the spill was a significant disaster. Initial reports pegged the leak at 126,000 gallons; that was later revised to 144,000.

In addition to fueling an industry that causes global warming, oil spills are also more likely as a result of climate change. While the origins of the California spill remain unclear, scientists agree that extreme weather events like hurricanes make spills more likely. Oil drilling is a complex process that demands extensive, delicate infrastructure. Natural disasters that break machinery on rigs, platforms and production facilities will become more common as the planet warms, which increases the likelihood of spills taking place.

The oil spill off of American coastal waters comes only a month after an oil spill in the Gulf of Mexico that began in the days before Hurricane Ida hit the Gulf Coast. That spill occured when an underwater pipeline at an offshore drilling site two miles south of Port Fourchon, Louisiana, began oozing oil. As the oil slick spread out on the water, officials would eventually find more than 100 birds pickled in crude oil, with satellite images showing a dark cloud drifting eastward for miles.