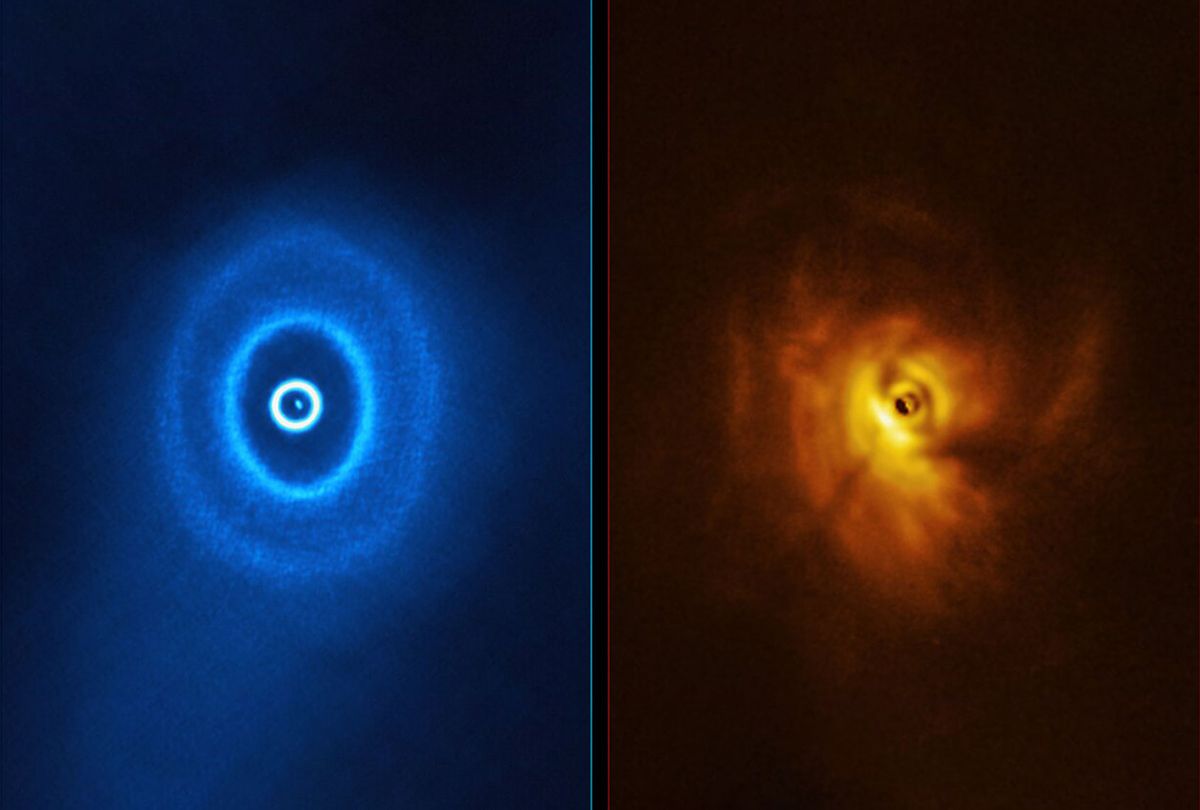 ALMA, in which ESO is a partner, and the SPHERE instrument on ESO’s Very Large Telescope have imaged GW Orionis, a triple star system with a peculiar inner region. Unlike the flat planet-forming discs we see around many stars, GW Orionis features a warped disc, deformed by the movements of the three stars at its centre. The ALMA image (left) shows the disc’s ringed structure, with the innermost ring separated from the rest of the disc. The SPHERE observations (right) allowed astronomers to see for the first time the shadow of this innermost ring on the rest of the disc, which made it possible for them to reconstruct its warped shape. (ALMA (ESO/NAOJ/NRAO), ESO/Exeter/Kraus et al.)
--

In one of the most iconic scenes from the original "Star Wars" movie, Luke Skywalker gazes at two suns setting on his home planet. While a planet with two sunsets might seem like the kind of thing that only happens in science fiction movies, it is not at all. In fact, a solar system that hosts two stars isn't uncommon; it is believed that half of all star systems consist of two or more stars that are gravitationally bound to each other. Astronomers have also discovered at least 20 "circumbinary exoplanets," meaning planets outside of our solar system that orbit two stars.

But what about a planet that orbits three stars at once? Is such a thing possible? Astronomers have long suspected that planets were less likely to last long in three-star systems, because of the chaotic nature of three-body systems. In part, that's because the long-term motion of a three-star system is likely to be chaotic; for a solar system to last millions of years like our own would require long-term stability in the motion of its largest bodies. (Notably, there have been planets discovered within trinaries, although these worlds only orbited one or two of these system's three stars.)

Yet the universe is full of surprises, and new astronomical data suggests that there exists at least one such planet orbiting three suns at once.

Hence, in a distant star system called GW Ori, which is 1,300 light-years away from Earth, researchers and astronomers may have just discovered the first known planet to orbit not one, or two, but three stars, according to a new study published in the Monthly Notices of the Royal Astronomical Society. Thanks to observations from the powerful Atacama Large Millimeter/submillimeter Array (ALMA) telescope in Chile, astronomers had the opportunity to observe a dust ring, which is important to planet formation, around the three stars in this distant star system.

Puzzled by the way the dust ring looked, researchers like Jeremy Smallwood, lead author of the study and recent University of Nevada-Las Vegas graduate, who has a Ph.D. in astronomy, took a closer look.

"What we find is that when we look in this disc through our telescopes, we see a large gap,"  Smallwood said. "And it's not quite clear how the gap is formed, but our scenario is that a planet is actually currently forming in the disc, and then, as the planet orbits around the three stars. The planet actually gathers all the gas around it and creates a gap in the disc."

The planet's orbit through the dusty disc essentially clears a path, creating an imprint that Smallwood and his colleagues were able to observe. Of course, since this star system is so far away, it's impossible to see exactly what's going on — which is why the astronomy team turned to modeling to help figure out what's going on.

"From our simulations, we found that this planet does indeed carve a gap in this disc, and we kind of matched that with the observations and they're in good agreement," Smallwood said. "We can't directly see the planet so it's just a possibility because of the gap in the disc."

What additional information is needed for scientists to confirm this theory?

"I think the answer to every question on this topic is that we just need more higher-resolution observations," Smallwood said. "We need to point more telescopes at this system."

Further observations from the ALMA telescope are expected in the coming months. Still, Smallwood and his team are able to theorize specific characteristics about this hypothetical planet, one being that if it is being formed in this disc, it is likely to be a gas giant like Jupiter. Scientists know that such big planets are likely the first ones to form within a star system; terrestrial planets, like Earth, form later.

Smallwood told Salon that not only would this hypothetical planet be a first for astronomers, but it could change the way astronomers think about planet formation.

That means, Smallwood said, planet formation can happen in a "wide variety of environments."

Could it be possible that if this planet orbits three stars, there would be three sunsets? Unfortunately, it's unlikely, Smallwood said. In GW Ori, two stars are really close to each other, and the third is a little further away.

Smallwood added: "But I'm not sure how day and night would work if you saw all three stars in the sky, it could get a little complicated."

We'll leave that for science fiction writers to figure out for now.