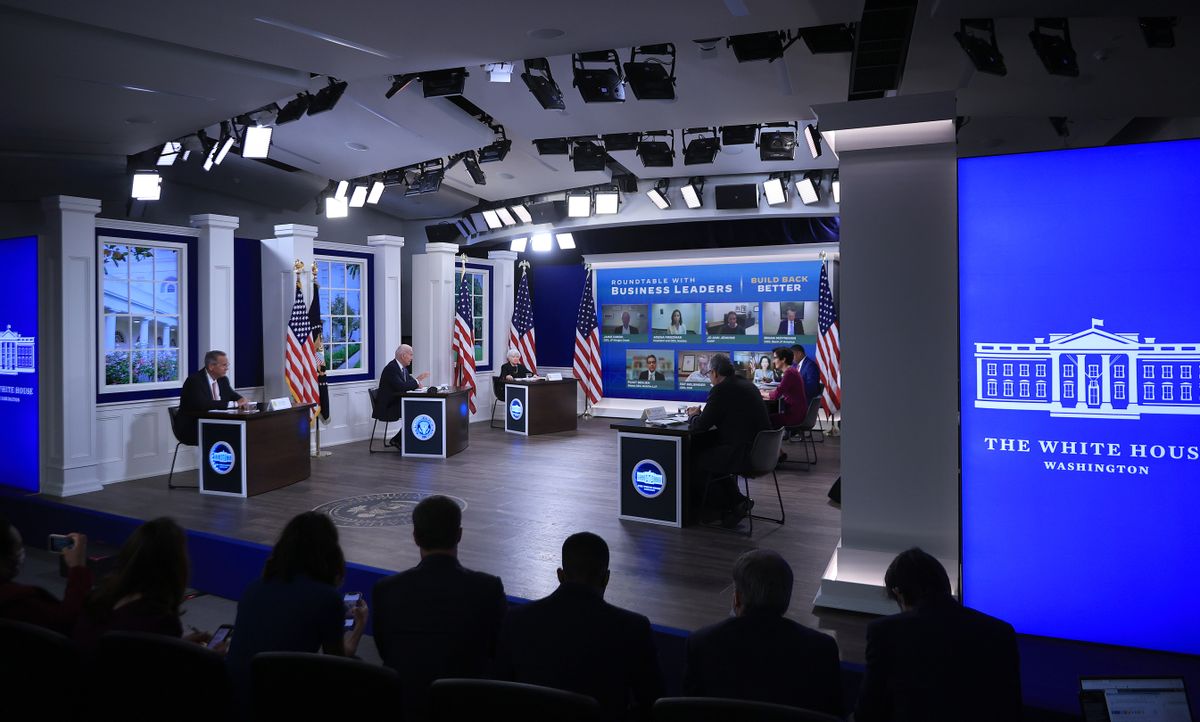 "QAnon John" whipped other followers of the conspiracy theory into a frenzy this week, when he shared a photo of the virtual White House set used by President Joe Biden on the social media app Telegram.

"In case you needed any more proof you are definitely watching a movie with a fake 'president,'" John Sabol, who has 69,630 followers on Telegram, wrote Wednesday alongside a photo of the stage in the Eisenhower Executive Office Building, which is frequently used for photo ops.

"Look no further. I challenge you to find me one picture like this while Trump was at the White House...I'll wait," Sabol wrote.

Newsweek notes that Trump made use of the same stage while in office, including on July 24, 2020, when he signed a series of executive orders aimed at lowering prescription drug prices.

According to Newsweek, "QAnon John" Sabol's post had been viewed 17,800 times by Thursday afternoon, with many agreeing that the photo of Biden proves Trump is still in charge.

"But, several others queried why positions unpopular to Republicans and Libertarians, such as vaccine mandates, would be passed if Trump was somehow still in power," Newsweek reported. "Many QAnon followers have believed President Biden is not actually in control of the country and have desperately looked for any clues to back up their unfounded claims. In June, a number of QAnon followers claimed they could see former President Trump in a reflection of a window in a photo posted on the POTUS Instagram page that showed President Biden in the Oval Office."

Stephen Miller, who served as one of Trump's top advisers, also shared a photo of Biden's virtual set on Wednesday, calling it "bizarre."

"The reason Biden uses this bizarre virtual set for televised meetings—and not an actual room like East Room, Cabinet, Oval, Roosevelt, Sit Room, etc.—is because it allows him to read a script directly from a face-on monitor (& w/out teleprompter glass that can be seen on camera)," Miller wrote.

White House reporter Andrew Feinberg responded to Miller's tweet with a photo of Trump reading from a teleprompter.