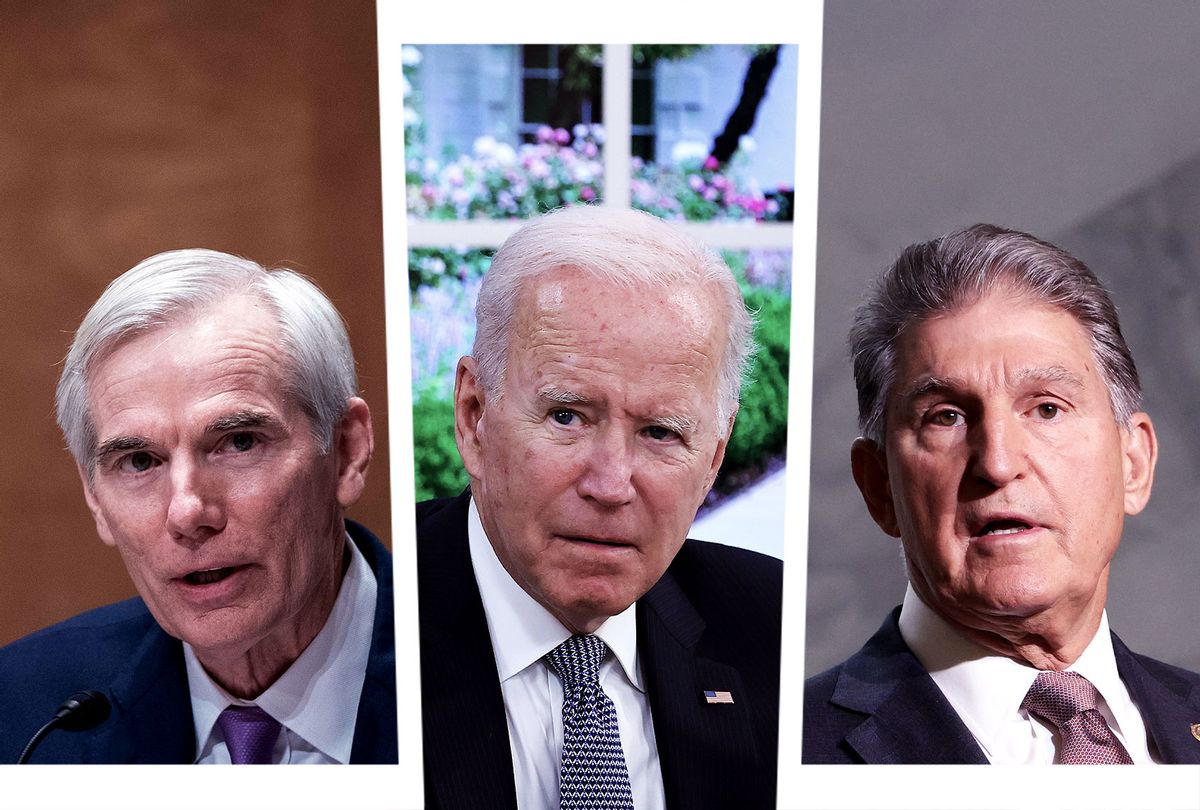 Congress quietly used last week's government funding bill to extend a Trump-era drug policy that is widely perceived as deepening racial disparities in criminal sentencing. Criminal justice groups say the policy will worsen mass incarceration and lead to increased numbers of overdoses — but for unclear reasons, the Biden administration is pushing to make the policy permanent.

In 2018, the Drug Enforcement Agency under former President Trump used its emergency authority to preemptively criminalize an unknown number of substances it considered "fentanyl-related," but without any health analysis by government agencies to determine each substance's potential for abuse and lack of therapeutic potential. The DEA classified all these variants of fentanyl as Schedule I drugs — the same class as heroin and cocaine — even if they have no realistic potential for abuse.

This was especially noteworthy given that fentanyl itself — a powerful synthetic opioid that is used as pain medication and is also widely available on the black market — is a Schedule II drug, meaning it has potential for abuse but also medical value. Congress has codified and extended the policy multiple times since, including a three-month extension that was quietly added to the bill to avert a government shutdown last week. The move applied decades-old mandatory minimum sentences for this newly invented class of fentanyl-related substances.

"It's a totally novel approach — to criminalize something before it's even determined to be harmful," Laura Pitter, the deputy director of Human Rights Watch's US Program, said in an interview with Salon. "There's concern that they're going to try to apply this to other types of substances going forward as well," she said.

Human Rights Watch was one of more than 140 advocacy groups that called on Congress and the Biden administration to allow the policy to expire. Congress extended it anyway.

"As we approach the 50-year milestone of President Nixon's announcement of the War on Drugs, there is ample evidence that these unscientific policies destroy communities, entrench racial disparities, and do nothing to reduce drug supply or demand," the coalition said in a letter to congressional leaders.

The coalition sounded the alarm on the rise of overdoses from fentanyl analogs but says "drug interdiction does not address the root cause of these overdoses," pointing instead to factors like economic instability, alcohol use, and mental health challenges.

Fentanyl, a synthetic opioid that is described as 30 to 50 times more potent than heroin, is available legally by prescription and is used in hospitals to treat severe pain. Most fentanyl and fentanyl analogs found in recreational drugs are manufactured in illegal laboratories. Some of these fentanyl analogs can be far more potent than the prescription drug, but most have not been extensively researched and in some cases are essentially "biologically inactive." Fentanyl and its analogs are sometimes added to other street drugs, including heroin and cocaine, and users are often unaware their drugs are laced with a fentanyl-related substance. Nonetheless, prosecutors can seek mandatory 20-year sentences if a user is found with just a trace amount of a fentanyl analog in a mixture of fewer than 10 grams.

"When there's such a broad classification of anything that's chemically similar, I think it really opens up this opportunity for substances that don't have any impact on the body or brain to land as a drug that can be deeply criminalized," said Ellen Glover, campaign director for drug policy, harm reduction and criminal justice at the grassroots network People's Action, in an interview with Salon.

As a result of the class-wide scheduling, fentanyl analogs now involve higher penalties than many other drugs. Pitter said there are "huge racial disparities in the way these prosecutions are carried out and the impact they have on Black and brown communities in particular."

Indeed, an analysis released by the U.S. Sentencing Commission earlier this year found that nearly 70% of those sentenced for fentanyl analogs in the year after the policy was enacted were Black or Latino.

Proponents of the policy have argued that it helps law enforcement target illegal manufacturers and get ahead of black-market chemists who tweak the chemical structure of drugs to evade regulation. But data shows that only about 10% of prosecutions have targeted the most serious offenders like importers, distributors and leaders.

"They're not going after the factory. The largest percentage of these prosecutions are low-level, they're not kingpins," Pitter said. "The people who are really going to be harmed by this continued over-criminalization are going to be the people at the lowest level of the drug food chain, the ones who are the users."

In fact, existing laws already allowed prosecutors to charge people found in possession of fentanyl analogs and much of the fentanyl panic has been "fueled by misinformation," according to a study published by the National Institutes of Health. This situation has made it more difficult to treat drug users while encouraging "hyper-punitive criminal laws," the study concluded.

"The more we criminalize substances, the more it pushes people who use drugs into the shadows, where they are less inclined to access support or care because they're afraid of the criminalization impacts," Glover said, pointing to the "skyrocketing overdose death rate."

The number of overdose deaths from synthetic opioids hit a record high in 2019 and continued to rise in 2020 amid the COVID pandemic.

Since the class-wide scheduling of fentanyl analogs went into effect, "overdose rates have skyrocketed, so criminalization is not an effective approach to trying to curb overdose deaths," Glover said. "We want to save lives, we want to stop them from overdosing. We know that science and evidence show us that we need to invest in public health solutions like treatment and harm reduction. There's lots of evidence to support that."

Pitter said she worries that the crackdown on fentanyl and its analogs could mirror the infamous increase in mass incarceration caused by the nationwide crackdown on crack cocaine in the 1980s and '90s.

"It's a continuation of the same policies and a failure to learn from the mistakes of the past," she said.

The DEA has lobbied Congress for years to make this policy permanent. Sens. Rob Portman, R-Ohio, and Joe Manchin, D-W.Va., have sponsored the FIGHT Fentanyl Act, which would classify fentanyl analogs as schedule I drugs indefinitely while removing some mandatory minimums.

A spokesperson for Portman told Salon that his bill addresses concerns about mandatory minimums while empowering law enforcement.

"Sen. Portman addresses both concerns through his FIGHT Fentanyl Act, which he introduced this year — the only bipartisan proposal that would permanently schedule fentanyl analogs," the spokesperson said, claiming that "we took into account feedback from the criminal justice reform community to ensure that mandatory minimum sentences are not automatically applied," while also sending "a message to the makers of these deadly drugs that we are serious about addressing this problem by giving law enforcement the tools it needs to keep these substances from coming across our borders."

The Biden administration has similarly proposed making the class-wide scheduling permanent while removing all quantity-based mandatory minimums. This proposal would allow the Department of Health and Human Services to remove or reschedule individual fentanyl analogs that are found not to possess a high potential for abuse.

"By acting on these recommendations, Congress can take decisive action against the fastest growing driver of overdoses in the country, while protecting civil rights and encouraging scientific research," Regina LaBelle, the acting director of National Drug Control Policy, said in a statement.

Glover said the proposed changes have not addressed concerns raised by People's Action "at all."

"The truth of the matter is that criminalization does nothing to save lives," she said. "If the goal is to end overdose deaths, then this is not the solution."

Pitter said the proposal addresses "some" of the concerns raised by advocacy groups but "it's not just mandatory minimums that are the problem, it's prosecution. It's still criminalizing possession and putting people through the system."

Pitter noted that the Biden administration's proposal would create a complex mechanism for people who are wrongly prosecuted under the scheduling policy to have their prosecutions reversed retroactively if it is later found that the substance they possessed should not have been criminalized in the first place.

That byzantine loophole amounts to an "acknowledgment that overcriminalization is going to happen and people are going to be prosecuted wrongly for this," Pitter said. "Undertaking an initiative like that is incredibly time-consuming and you've already put somebody through the entire process of prosecution. And they've already lost everything. Their job, their lives."

Advocates have increasingly called for drug decriminalization, pointing to successes in countries like Portugal, which has seen drug overdose deaths drop by more than 80% since it decriminalized drugs like heroin in 2000.

"Use and possession of drugs should not be criminalized to begin with," Pitter said. "There should be a health-based approach to drug policy and it should be grounded in providing people with the treatment that they need, not arresting their way out of this crisis.

"They should be focused on providing treatment and testing kits that allow people to test for the presence of these types of harmful substances in their drugs," she said, adding that such "health-based approaches" were not even included in Biden's proposed policy.

Despite the absence of such public health strategies, were not included in the proposal but LaBelle of the National Drug Control Policy has urged Congress to fund Biden's budget request, saying it "includes $10.7 billion to expand access to substance use prevention, treatment, harm reduction, and recovery support services."

Other advocates say that's not enough. People's Action is instead backing the Mainstreaming Addiction Treatment (MAT) Act, which would expand access to medication-assisted drug treatment, and the Support Treatment and Overdose Prevention (STOP) of Fentanyl Act, which would invest in harm reduction policies like overdose prevention and expanded access to treatment.

"I hope and expect that Congress has learned its lesson from 50 years of failed drug policies," Glover said, "and that we'll follow a new path forward that supports public health solutions."