A New Confederacy: Trump and the Republicans have already seceded

Now they’re preparing to fight a new civil war. In fact, they're already doing it in all but name 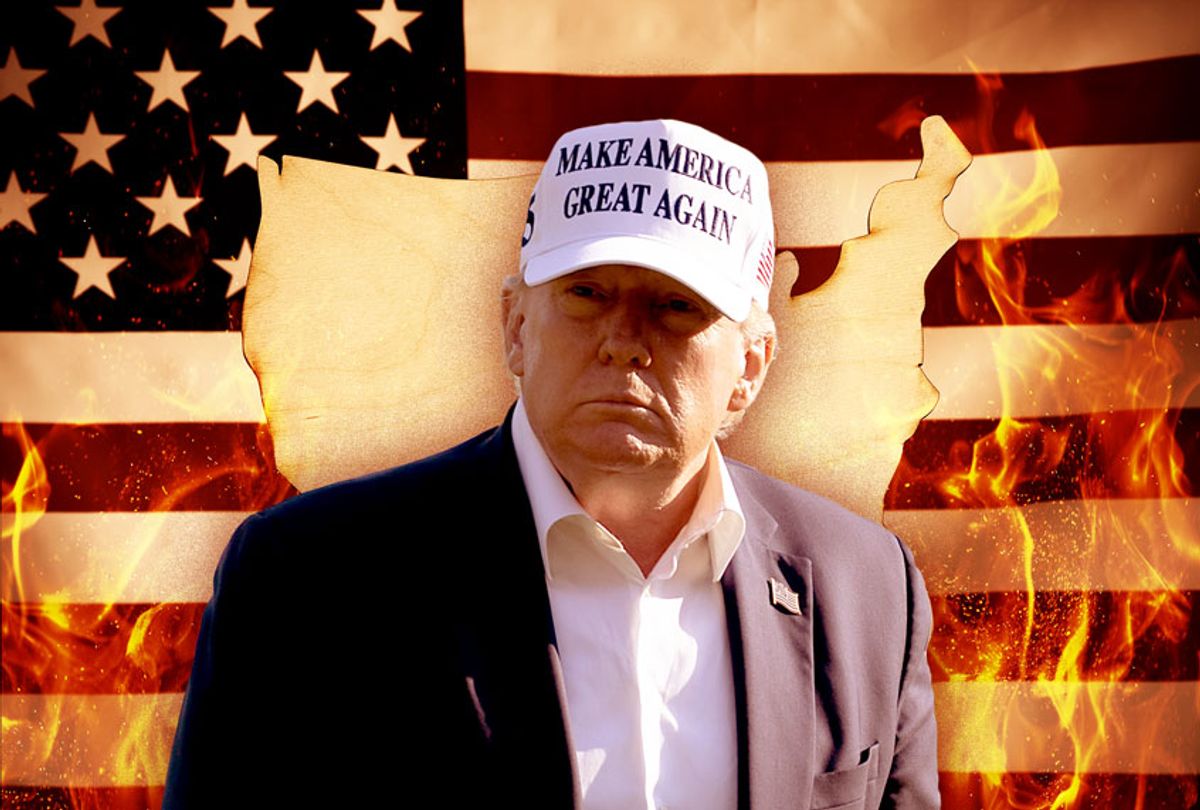 Nineteen states have enacted a total of 106 new laws restricting a woman's right to choose to have an abortion, according to the Guttmacher Institute. Twelve states enacted outright abortion bans, and Texas enacted a law banning abortion after six weeks of pregnancy, which is effectively a ban on abortion since most women don't even know they are pregnant at six weeks. Twenty-five states require a waiting period, usually 24 hours, before an abortion can be performed. Twelve of those states effectively mandate that women must return to a clinic twice over a two-day period before obtaining an abortion. Eighteen states require "counseling" before abortions, including notices of a purported link between abortion and breast cancer, the alleged ability of a fetus to feel pain, and the unproven long-term mental health consequences of abortion.

Twelve states have refused to expand Medicaid coverage under the Affordable Care Act, leaving as many as two million people without health insurance. Three of those states have Democratic governors who have attempted to get their legislatures to go along with Medicaid expansion but have been stymied by the state legislatures. Six states that recently expanded Medicaid coverage did so only after citizens forced the issue with ballot measures. All had governors and legislatures that had previously refused to extend coverage.

All of the states that refused Medicaid expansion and have passed restrictions on voting and abortion are controlled by the Republican Party. Many of those same states have also passed bans on mask and vaccine mandates, and nearly all of them have endured more cases per capita of COVID-19, more hospitalizations and more deaths from the virus. In effect, without any states (yet) seceding from the Union, we already live in two Americas.

One of those countries-within-a-country, in the words of the esteemed lawyer and Harvard professor Laurence Tribe, "has no set of constraints, no belief in the norms, no commitment to the Constitution or the rule of law, while the other side is trying to observe the rules." He said this on Wednesday night on "All in With Chris Hayes" on MSNBC, while discussing the challenges we face going into the 2022 and 2024 elections.

Even the subject of that show seems quaint at this point, because I don't think we are able to hold what we have always thought of as "elections" in this country anymore. If politics in the United States were a basketball game, the rules of the game along with fouls and penalties would apply to one team, the Democrats, and not to the other, the Republicans. The game, in the immortal words of Donald Trump, has been "rigged." It's not possible for the Democratic Party to win elections, because the Republican Party has decided it won't recognize Democratic victories. The only "wins" that are "legitimate" are Republican wins.

That's what these so-called audits have been about. I mean, just take the Arizona "audit." It was conducted on the orders of the Republican-controlled state Senate, but they didn't order that the entire election held in Arizona be audited. No, they just ordered that one election in one county be audited: the presidential contest in Maricopa County (which includes Phoenix, by far the state's largest city). They didn't audit the races for the state Senate, which they won. They just audited the election for president, which their candidate lost, in the largest county won by his opponent, Joe Biden.

It's like counting all the baskets made in a game by one team and not counting those made by the other team. There is only one way to win the game: If you're on the team whose baskets get counted, i.e., the Republican team. If you're on the Democratic team, your points don't go up on the board.

Tucker Carlson's "replacement" theory, which he now pushes almost nightly, is just another birther campaign like Trump's. Brown people and Black people and immigrants don't count, and their votes are no good because they're playing for the wrong team. They can't "replace" us because they're not "real" Americans. Hitler did the same thing in Germany in the 1930s when he declared that Jews were not real Germans. Then he passed the Nuremberg laws and formally stripped Jews of their citizenship. Then he took their wealth and businesses. Then he took their lives. Republicans have already made plans to challenge birthright citizenship. It's past time to wonder what they plan to do next, because they're already doing it.

The laws restricting voting that have been passed largely in Republican states apply to others, not to us. We've got our IDs because we own cars and have drivers' licenses. They take the bus; they don't. Their points don't count. We live in neighborhoods with a lot of precincts and voting locations. They live where there are far fewer voting places and more rules. The long lines they stand in to vote mean their points don't get on the board. They don't count.

We don't pass laws against vasectomies because we have dicks and we might need them. Laws restricting or outlawing abortion, on the other hand, are about women — and we're not women, we're Republicans! We can do whatever we like in the game out there on the floor because we're on the correct team! We don't get a foul called because of six weeks or 15 weeks or waiting periods, because the rules don't apply to us, they apply to them. Our points count. Theirs don't.

This is what I mean when I say that Republicans have already seceded. They're a white party and they're forming a white country with white laws and white companies and white jobs where white votes count and others don't. They can live in the states that comprise that country, but they can't survive there without our money. It was the same way with the South before the Civil War. They lived in their states with slavery, but they couldn't survive without the economy of the North, so they started a war. They never intended to "secede." They intended to win, and run the new country, which would be the South writ large, with slave-owners in power and slavery everywhere.

That's what Republicans and Donald Trump are doing right now. They know they can't win legitimate elections. There aren't enough of them. So they are engaged in a war, with the aim not of winning elections, but of taking over and exercising the power that, at least until now, came from winning elections. Republicans can't rely on doing that, so they have transformed their party from one that participates in democracy to a fascist party engaged in a takeover of the United States of America.

Democrats may or may not "win" in 2022 and 2024, but the elections are already over. Republicans have declared that only their votes count. Unless we get together and stay together and use our numbers to protect our democracy, we will end up living in their fascist country ruled by their dictator.